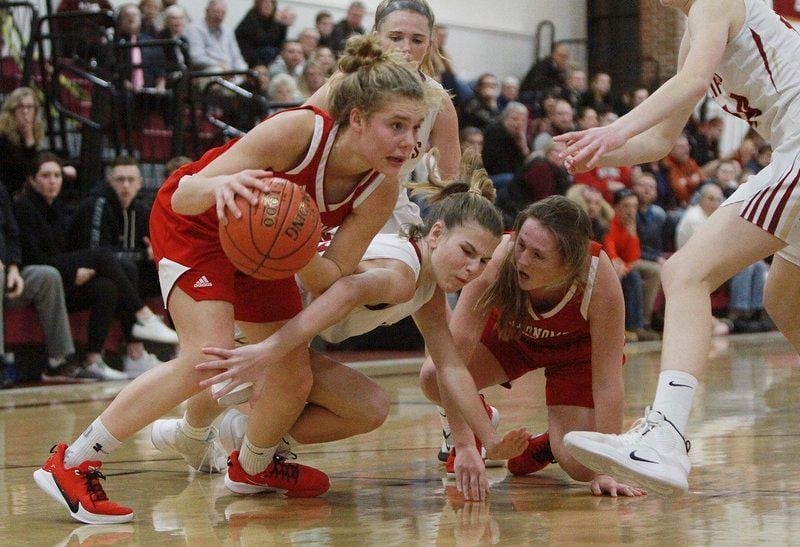 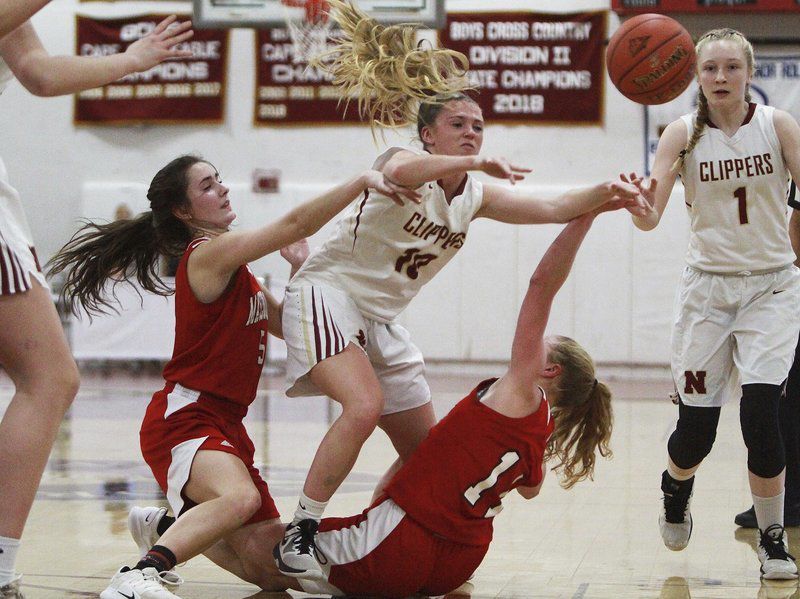 Newburyport’s Elle Doucette passes the ball as Masco’s Paige Richardson and Jenna DiPietro look to cut off her progress. 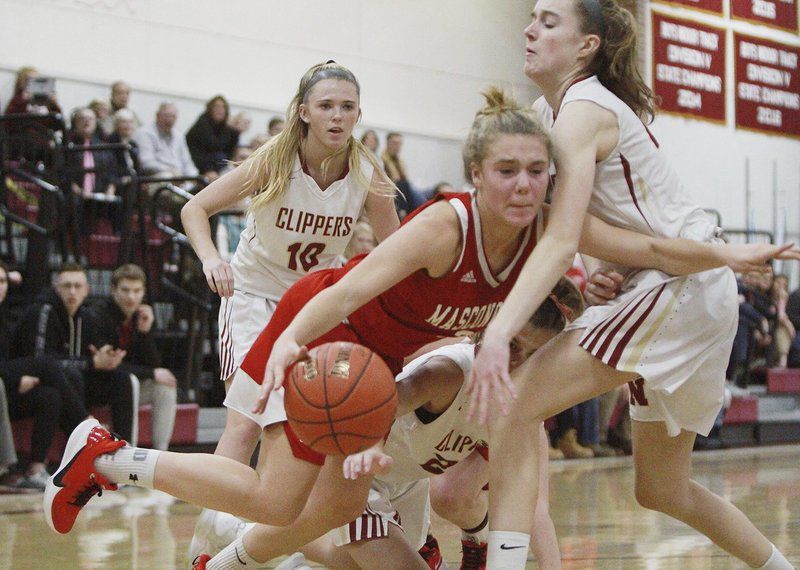 Newburyport’s Elle Doucette passes the ball as Masco’s Paige Richardson and Jenna DiPietro look to cut off her progress.

Hamilton-Wenham 76, Manchester Essex 75 (OT): All five starters were in double figures in the huge CAL win for the Generals. Markus Nordin’s 17 points and seven boards led the way while Ian Coffey had 16 points, Carter Coffey scored 16 as well, Ryan Hutchinson had 15 and Ryan Monahan scored 12 with 11 rebounds.

Bishop Fenwick 53, Archbishop Williams 51: Sophomore Jason Romans led the way for the Crusaders (5-2) with 19 points in another impressive CCL triumph.

Mystic Valley 68, Essex Tech 51: The Hawks got a solid double-double from C.J. Klass with 17 points and 10 rebounds not to mention sophomore Josh Berube’s 12 points, five rebounds and six assists.

Covenant Christian 57, Boston Trinity 47: Cole Behrens poured in 18 points to help the Cougars improve to 5-2 on the year. Jordan Plosker also had a stronng outing with 13 rebounds.

Newburyport 67, Masconomet 43: The Chieftains were felled by the Clippers.

Swampscott 63, Saugus 56: Oscar Hale went off for a triple-double with 20 points, 16 rebounds and 10 blocks (including three on one possession) to help the Big Blue even their record at 4-4 with a nice road win. Cam O’Brien chipped in nine points and five steals, Liam Hamilton had 10 points and 10 boards and Anthony Rakauskas had a nice all-around game with nine points, eight rebounds, five steals and four assists. Swampscott was without starting guard Andrew Augustin, who is battling an injury.

Lynn Classical 55, Marblehead 41: Adam Zamansky grabbed 18 rebounds and managed six points, but the Magicians struggled from the free throw line and inside en route to the NEC setback. Marblehead had it to within eight points with two minutes left but ultimately couldn’t get over the hump.

Lynn English 84, Danvers 43: The Falcons hung in with the defending Division 1 state champs, trailing by 16 at the break. Jared Berry had a solid game with 13 points, five rebounds and two assist and Max Beuvelet chipped in with seven points and 10 boards

Georgetown 55, Ipswich 42: Will Vanderbilt and Nikhil Walker each scored 11 points for the Tigers, but it wasn’t enough. Ray Cuevas added nine points in the loss.

Fenway 50, Peabody 30: Amber Kiricoples had 14 points and 11 rebounds to lead the Tanners while Emily Carney chipped in with seven points.

Hamilton-Wenham 44, Manchester Essex 39: The Generals (4-2) made 10 free throws and outscored ME 20-8 in the fourth quarter to win it. Belle Dolan and Olivia Currier each had 14 points to pace H-W while Maddy Rivers had nine and Jemma Shea scored six. Currier and Shea pulled down 10 rebounds each.

Hebron 5, Pingree 1: Cece Herriman had the lone goal for the Highlanders (3-4-1), who were in it until the third period when visiting Hebron scored three times to pull away. Katelyn Clarke and Zarenna Sawyer grabbed helpers on the tally.

Norwell 6, Peabody 4: The Tanners (7-3) rallied from three different one-goal deficits only to see the Clippers break a 4-4 tie on a penalty shot to take the lead for good. Paige Thibodeau had her first goal of the year for Peabody while Sammie Mirasolo, Jenn Flynn and Jenna DiNapoli also scored. Goalie Jeny Collins made some outstanding saves to keep her team in it.

Endicott 4, Tufts 2: James Winkler’s eighth goal of the year midway through the third stood up as the game-winner for the Gulls, who got an emtpy netted from Luke Rodgers and came back from two deficits on tallies by Campbell Balk and Zach Mazur. Mitch Shaheen assisted on the game-winner and Conor O’Brien made 24 saves in the road win.