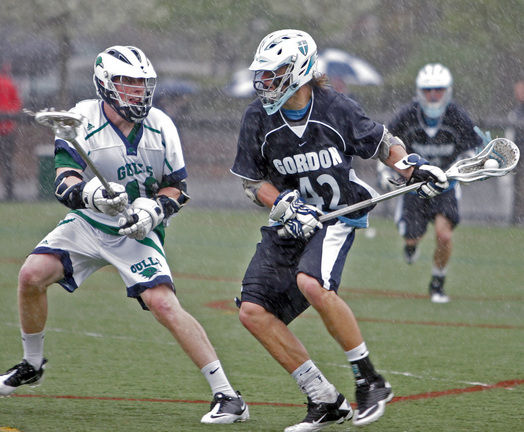 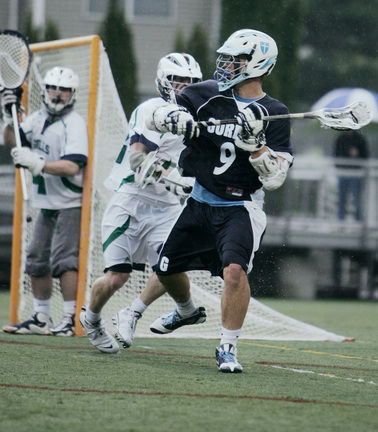 Had the Bishop Fenwick girls lacrosse team played the second half the same way it played the first, the Crusaders could have been in for some trouble against St. Mary's yesterday.

Fenwick made some necessary adjustments, however, and pulled away for a 23-13 victory over the Spartans.

"We were only up two (goals) at halftime," Fenwick coach Karen Guillemette said. "We started to win draw controls and we moved the ball very well, and transitioned well in the second half."

The result was a 14-6 scoring advantage after intermission in favor of Fenwick.

Annette Ruggiero also scored a goal for Fenwick, which has won 10 straight games since losing its opener to Ipswich.

Goalie Kaitlyn McCarthy was another standout for the Crusaders, stopping 12 shots.

Georgetown 13, Masconomet 12: The Chieftains led by a goal with approximately two minutes left, but Georgetown stormed back to win it late. Amy Arnold scored four times and assisted twice, while Courtney Cliffe contributed two goals. Hannah Brazel and Kathleen Gillespie also played well, scoring one goal each. Masco moved to 7-4 with the loss.

h-w 9, Ipswich 7: The Generals hiked their record to 5-3, led by Eddie Frick, who had three goals and Eliott Burr, who had a pair of goals. Matt Putur also chipped in two goals while Sam Martinez and Christian Valletti each had one.

waring 14, gann 7: Teddy Lyman finished with four goals for Waring (9-1). Casey Ballin had a pair of goals and four assists while Henry Balf had two goals, as did Kimmy Stewart. Gann led 5-4 at one point.

Chelmsford 15, Peabody 5: Nico Manginello scored two goals, while Anthony Robinson, Jake Clickstein, and Greg Celentano each had one, but it wasn't nearly enough for the Tanners (1-7).

MASCONOMET 115.5, HAMILTON-WENHAM 18.5: Dave Searles was a double winner for the Chieftains (5-2), taking the 100 and the 200. Cam Hebert won the 400 hurdles and Jason Bermudez took the discus. Jason Mutterties captured the javelin and Marco Caserta won the 2-mile.

Dan Utz led Gordon with three goals and two assists, while Zac Blue and Adam Quinn each had one goal and one assist.

Endicott 13, Curry 12: The defending champion Endicott women's lacrosse team rallied from a goal down in the final minute to stun visiting Curry, 13-12, in a Commonwealth Coast Conference tournament semifinal matchup under the lights of Endicott Stadium. Senior Kellie Cunningham pulled the Gulls even with the Colonels with just 42 seconds remaining before sophomore Holly Davis scored the game winner with seven ticks left on the clock to propel the Blue and Green into the title game for the seventh straight year.

western new england 12, gordon 8: Kari Christensen and Anna Blomberg each had two goals for Gordon, which lost in the Commonwealth Coast Conference tourney.