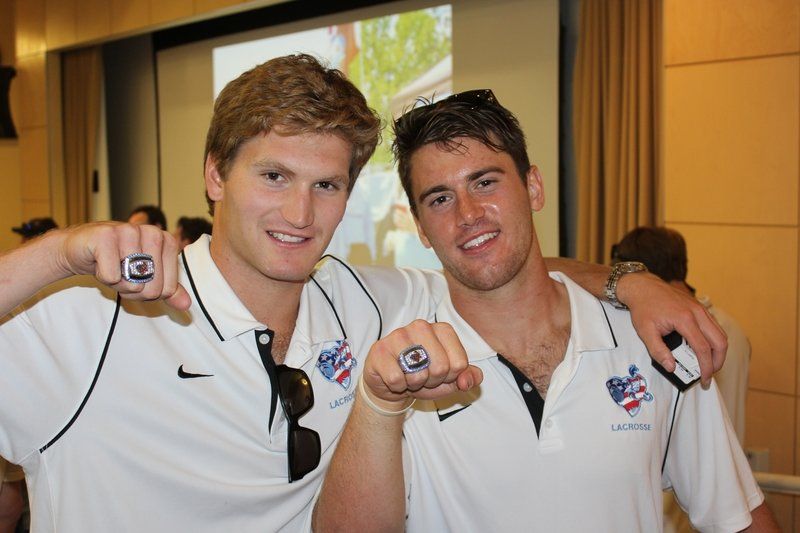 Tucker Mathers of Boxford and Jake Gillespie of Topsfield show off their national championship rings won this past spring with the Tufts University lacrosse team. Courtesy photo. 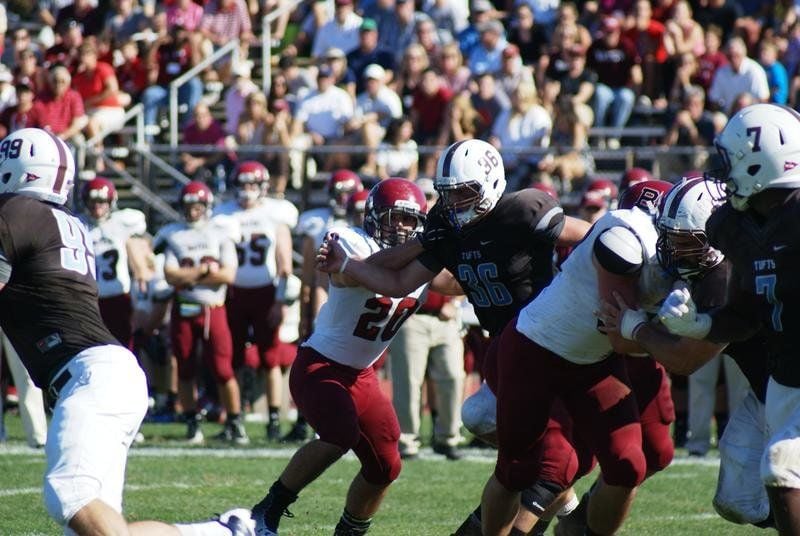 Boxford's Tucker Mathers has helped the Tufts football team win its first two games of the season after having lost their previous 31 games. He was also a member of the school's NCAA championship lacrosse team last spring. Courtesy photo

Tucker Mathers of Boxford and Jake Gillespie of Topsfield show off their national championship rings won this past spring with the Tufts University lacrosse team. Courtesy photo.

Boxford's Tucker Mathers has helped the Tufts football team win its first two games of the season after having lost their previous 31 games. He was also a member of the school's NCAA championship lacrosse team last spring. Courtesy photo

Not only did Mathers’ Jumbos win their second straight football game after going 0-8 last season, but his national championship lacrosse squad received their rings after the first quarter of the football game.

Since the former St. John’s Prep star is the only Jumbo to play both sports, Mathers had to hurry to the center of the field after the first quarter ended to take his place with the lacrosse team.

“I was in a quick positional meeting when they called for the lacrosse team to go out to get the rings,” said Mathers, a Boxford resident and a weak side defensive end for the Jumbos, the same position he played at St. John’s. In lacrosse, he’s a defender. “I had to leave the meeting to join my lacrosse teammates. We were honored along with the softball team that also won a national title. The rings are awesome.”

For Mathers, the 2013-14 season started with a long winless football season, but ended with a terrific lacrosse campaign that culminated in Baltimore with a 12-9 victory over Salisbury for the Division 3 NCAA championship. The team posted a 21-2 record and had the most wins in school history.

Tufts football had the dubious record of having the longest losing streak in the country with 31 straight losses. That was broken in this year’s season opening win over Hamilton, 24-17, followed by a 42-24 victory over Bates.

“It’s been wonderful so far,” said the 6-foot-2, 210-pounder, who got his first start and had a forced fumble, sack and five tackles in the Bates game. The fumble was recovered by Tufts in the fourth quarter and led to a touchdown to put the game away. Going 0-8 was tough, but I got in seven games and learned a lot. I have to give a big shout out to Joe Lovett, my defensive end coach at St. John’s, because he taught me so much.

“We rotate a ton on the defensive line, and I’ve been playing a lot more this year. I was so nervous getting my first start last week, especially going against my old (SJP) teammates Sean Lovett and Jimmy Fagan. My next door neighbor, Sean Antonuccio, who played for Masconomet, is on the Bates team too.”

“This season our football team adopted some of the culture of the lacrosse team,” said Mathers. “I don’t know if I will start again at Bowdoin (tomorrow), but I try to work hard all the time in practice. If you do that, you usually get rewarded.”

Mathers is an international relations major who chose Arabic as his language requirement. He isn’t sure what he wants to do when he graduates, but is thinking about something that involves security.

“I’m considering everything and looking for a summer internship so I can focus more on what I want to do,” he said.

“I’m focused on the football season now, and when it’s over I’ll take a week-and-a-half off like I did last year before getting right back into lacrosse. We lost some studs from last year’s team who were great leaders and mentors, but we have a lot coming back along with good freshmen recruits. We reload every season.”

Jean DePlacido is a part-time writer and columnist for The Salem News. Contact her at jmdeplacido@aol.com.