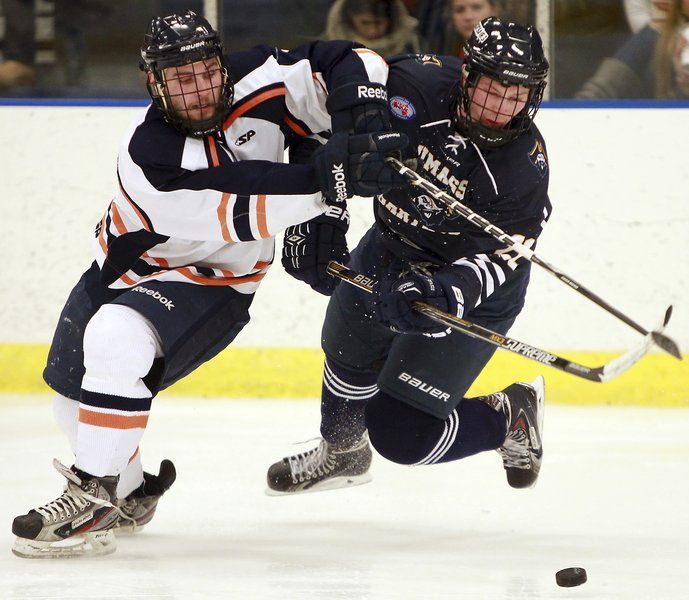 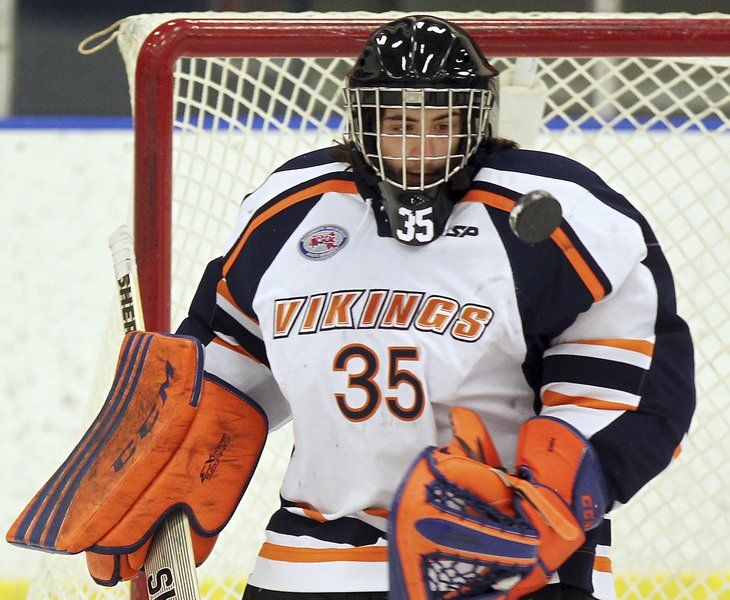 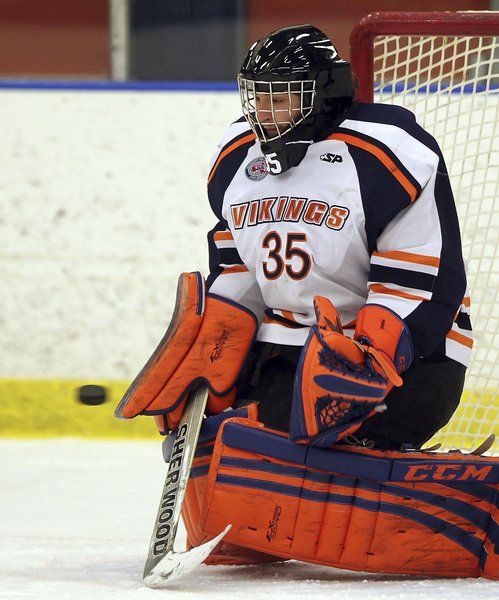 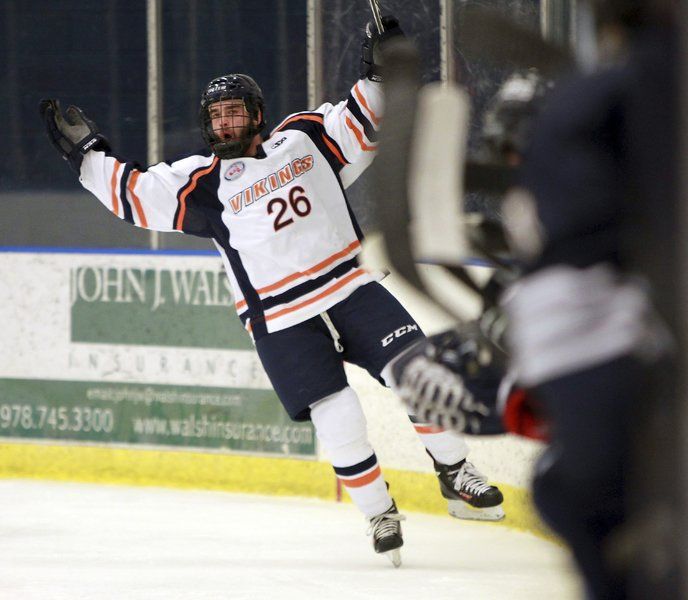 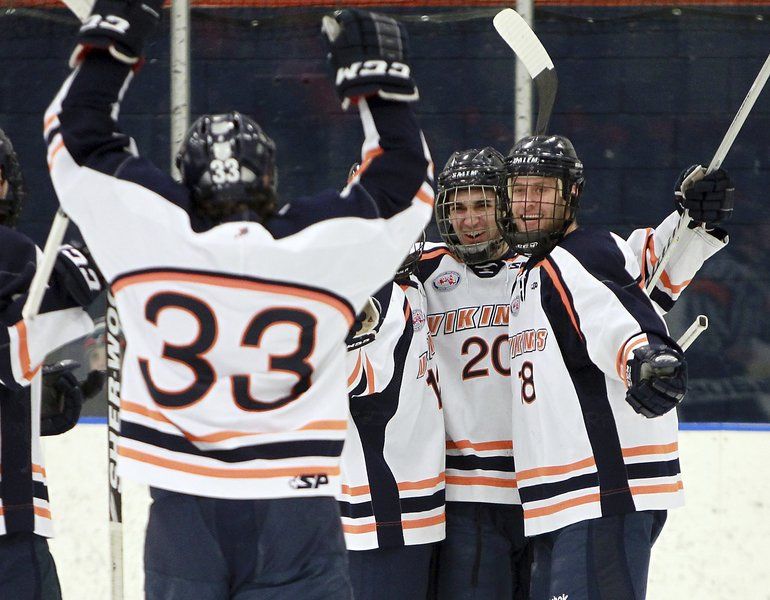 DAVID LE/Staff photoMembers of the Salem State hockey team celebrate one of their two first period goals Thursday night against UMass Dartmouth. The Vikings would eventually roll to a 6-1 victory.

DAVID LE/Staff photoMembers of the Salem State hockey team celebrate one of their two first period goals Thursday night against UMass Dartmouth. The Vikings would eventually roll to a 6-1 victory.

SALEM — A much-needed victory was cemented within a span of 19 seconds for the Salem State hockey team Thursday night.

Goals by Chris Mastropietro and John Hart in that span turned a two-goal lead into a comfortable four-goal advantage for the Vikings, who went on to topple MASCAC rival UMass Dartmouth, 6-1, at the Rockett Arena.

Kristofer Faric added an insurance marker six minutes later and freshman netminder Jason Pucciarelli stopped 24 of the 25 shots he saw as Salem State improved to 8-6-1 overall and 5-5 in conference play.

“We had pretty balanced scoring, with the goals spread out among the different lines,” Salem State head coach Billy O’Neill said afterwards. “Everyone contributed. Plus, Pucciarelli played great and our defense controlled the puck, helping to set up some of our chances (offensively).”

Mastropietro, who hails from Revere, scored to make it 4-2 seven minutes into the third period. Along with linemates Andrew Bettencourt and Michael Casale, they kept the puck hemmed in the Corsairs’ end before Mastropietro’s one-timer beat UMD goalie sophomore goaltender J.J. Solloway.

Off the next faceoff, sophomore John Hart took a pass and fired a shot over Solloway’s shoulder to increase the hosts’ lead to three. The goal, assisted by Cam Moniz and Peabody’s Andrew Bucci, chased Solloway from the game in favor of Nic Wackerly.

“We said after the second period that we had to play smarter,” said Salem State defenseman Keaton Cashin of Boxford, referring to his team’s multiple penalties taken in the middle stanza. “When we were playing 5-on-5, they couldn’t play with us.”

Faric, a senior who had assisted on an earlier tally, potted his team-leading 8th goal with 6:51 to play. For the evening the Vikings outshot UMass Dartmouth, 40-25.

A pair of freshmen helped stake the Vikings to a 2-0 lead after one period.

Billerica native Casey Miller got the hosts on the board just 1:25 into the contest with his first collegiate goal. With Salem State putting early pressure on UMD, Miller positioned himself in front of Solloway and beat him on Salem State’s second shot of the night. Faric and sophomore defenseman Brad Jones assisted on the snipe.

At the 13:19 mark, Casale made it 2-0 with a pretty unassisted goal. The Ontario native stole the puck at the blue line, carried it into the middle of the ice before crossing over and beating Solloway far corner for his third goal of the season.

“When I see the opportunity for them to shoot the puck, I’ll get in front of it every time,” said Cashin. “If I can block it and stop it from getting to the goalie, I love that job.”

Sophomore John Needham increased the Vikings’ lead to 3-0 early in the second period. With the two teams in a 4-on-4 situation, he took a Chad Goodwin pass and backhanded his sixth of the season it by Follaway at 3:21.

Salem State spent a good portion of the middle period killing off penalties and held the visiting Corsairs to only six shots on goal in the frame. Cashin, a former Masconomet Regional star, was essential to Salem State’s man-down success, blocking a pair of shots while using his body to knock UMD players off the puck.

One shot did get by Pucciarelli in the period, however, as Malden native Mike Restuccia’s rising blast on the power play found its way under the crossbar at 12:12 to slice his team’s deficit to 3-1.

“Dartmouth has a good power play and capitalized (on that play),” said O’Neill. “But we did a much better job staying out of the box in the third period and getting our lines changed faster.”

Four minutes before that UMD goal, Pucciarelli made the save of the game, robbing Brandon Gilmore’s shorthanded bid by protecting the corner of the net.