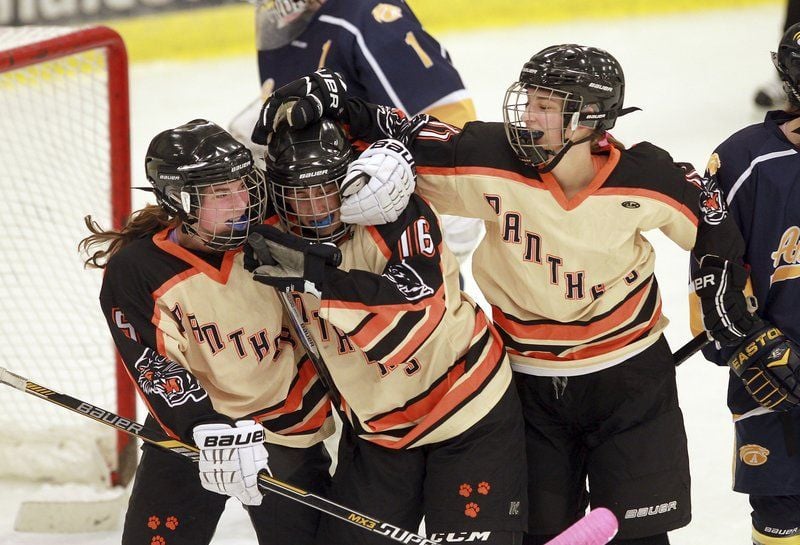 DAVID LE/Staff photoBeverly’s Kristen McCarthy (5) and Marlee Hamor (11) mob teammate Izzy Primack (16) after she scored the Panthers’ second goal of the night against Andover on the power play. 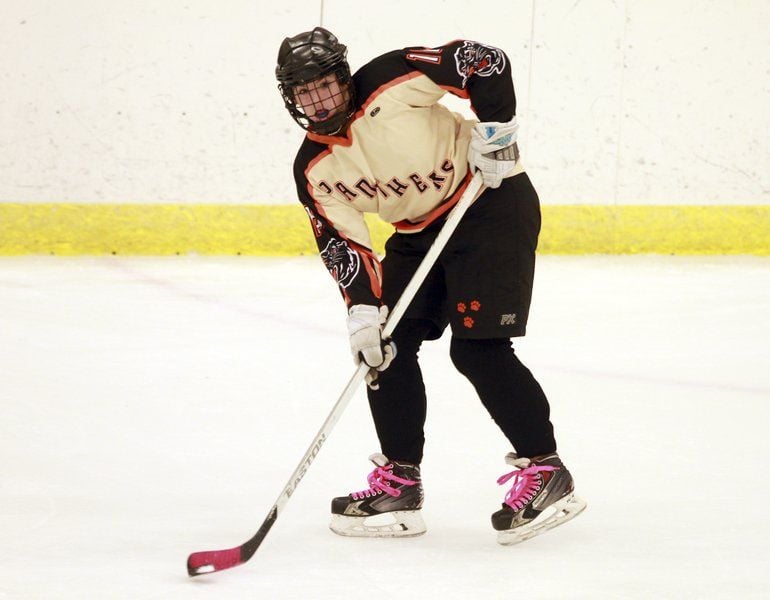 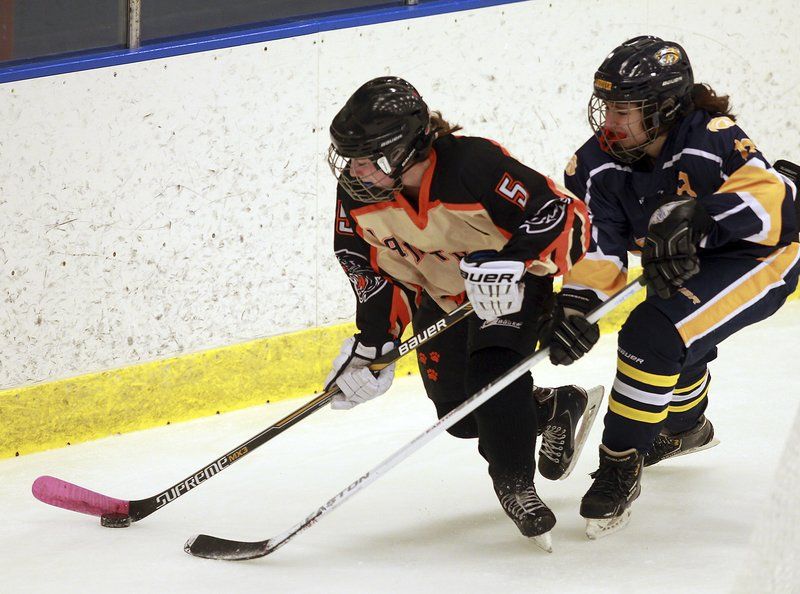 Junior forward Kristen McCarthy (5) of Beverly controls the puck behind the net while being pursued by Andover's Krystal Brighton. DAVID LE/Staff photo. 12/18/14. 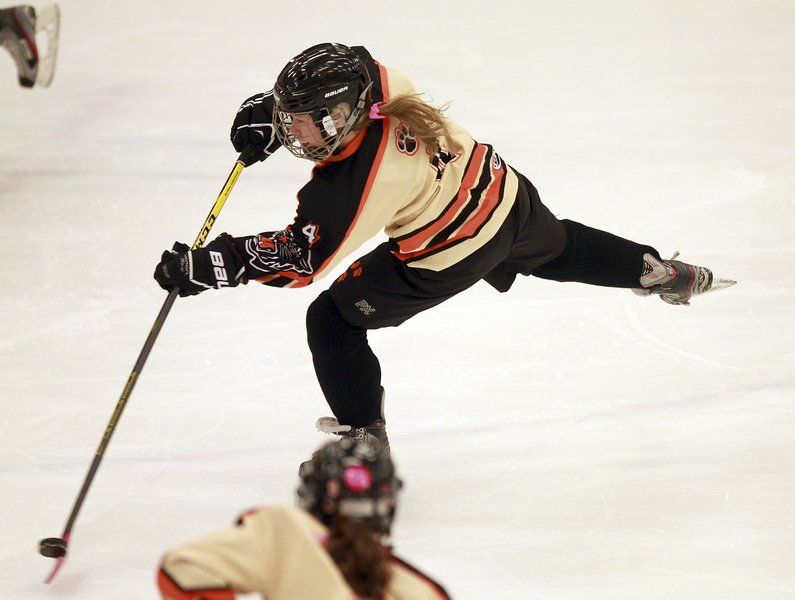 Beverly forward McKinley Karpa rifles a shot past the Andover goalie for the opening tally of the game last night. DAVID LE/Staff photo. 12/18/14. 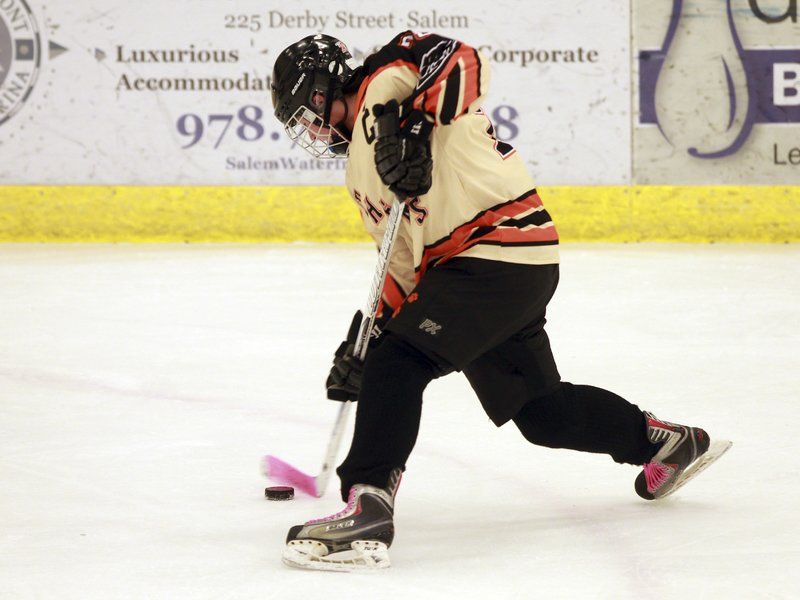 DAVID LE/Staff photoBeverly’s Kristen McCarthy (5) and Marlee Hamor (11) mob teammate Izzy Primack (16) after she scored the Panthers’ second goal of the night against Andover on the power play.

Junior forward Kristen McCarthy (5) of Beverly controls the puck behind the net while being pursued by Andover's Krystal Brighton. DAVID LE/Staff photo. 12/18/14.

Beverly forward McKinley Karpa rifles a shot past the Andover goalie for the opening tally of the game last night. DAVID LE/Staff photo. 12/18/14.

SALEM — Remembering a teacher still close to their hearts was by far the biggest goal for the Beverly and Andover girls hockey teams last night.

The next biggest one, however, was the eye-opening game-winner scored by Beverly junior Kristen McCarthy late in the second period, which helped her Panthers hand Andover its first defeat, 4-2.

Salem State’s Rockett Arena was decorated with pink and white balloons to honor Colleen Ritzer, the late Danvers High teacher and Andover native who was killed in October 2013. Donations were taken throughout the evening for the memorial scholarship fund in her name, and most of the players wore pink hairbands, skate laces or tape in honor of Ritzer’s favorite color.

Beverly (which has a co-operative girls hockey program with Danvers High) remained unbeaten on the season at 2-0 behind a goal and two assists from captain Caitlin McBride. Freshman goalie Madison Jalbert made 19 saves and was at her best in the second and third periods.

McCarthy gave Beverly the lead with an outstanding individual effort late in the second. Coming in from the left side, she was pushed behind the net by a defender but gathered herself and made a move to the front. The junior captain kept control of the puck and tucked it between the goalie’s pads for a 3-2 Beverly edge.

“She worked on a lot of skill this summer and it shows,” Beverly head coach Brian Seabury said of McCarthy, who led the state in assists last season. “Kristen knows we’re going to have to rely on her a little bit more to score (this season), and she’s taking that and running with it.”

The goal seemed to ignite the Panthers, who carried play for the remaining 2:25 of the frame. Andover goalie Meghan Johnson (17 saves) kept her team in it by getting in front of McCarthy’s shot on a 2-on-1 chance. Later in the same shift, Johnson slid across her crease to deny McKinley Karpa’s shot.

It was a needed burst of momentum for Beverly, which had shown tired legs for stretches of the second. The host Panthers had the long change in the middle frame, compounded by the fact that they didn’t get a break between periods with no ice made and were playing a deeper Andover (1-1) team that had beaten state runner-up Arlington Catholic days earlier.

“There were some bad changes there in the second, times when we weren’t moving our feet,” said Seabury. “That tends to happen in second periods, but I thought we gave them too much space. It’s part of the learning process early in the season.”

Holding the Warriors off in that difficult second was a credit to freshman goalie Jalbert (7 saves in the second) and defenders Caitlin McBride, Anna Hayden and Rachel Spencer.

“Caitlin must have played 30 minutes tonight,” said Seabury. “She was very, very strong and overall we had a good defensive game from the goalie on out. We kept most everything to the outside, which is what we want to do.”

Andover pressed in the third and Jalbert made several strong pad saves on their sniper, Jess Leone, to preserve the lead. With 6:22 to play, McBride scored a power play goal to give her team a two-goal edge (4-2) as she hammered a long shot after McCarthy found her open at the blue line.

Late in the first, the Panthers tied it up when Izzy Primack dug out a rebound of McBride’s power play blast and scored her first varsity goal. The power play tally by the Ipswich High freshman made it 2-2 with only 54 seconds left in the first.

Karpa struck first when McBride sent her into the zone on a 2-on-1 chance with McCarthy. Karpa picked her spot and scored to make it 1-0 for Beverly. Andover followed by tying it on a power play goal midway through the first and had their first lead on a 2-on-1 chance of their own at 10:30 that, ironically, made it 2-1 Warriors.

Beverly finished the game 2-for-4 on the power play while Andover was 1-3.