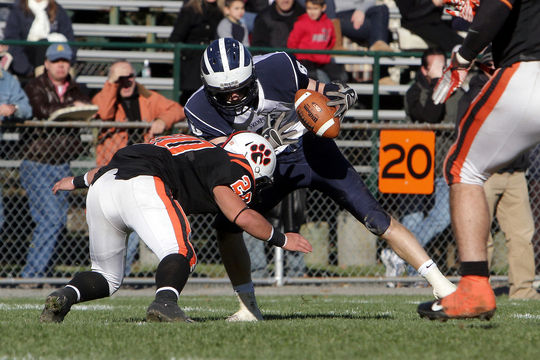 Swampscott's Aidan Lang manages to hold onto the ball despite a big hit from Beverly's Nick Theriault on Saturday. 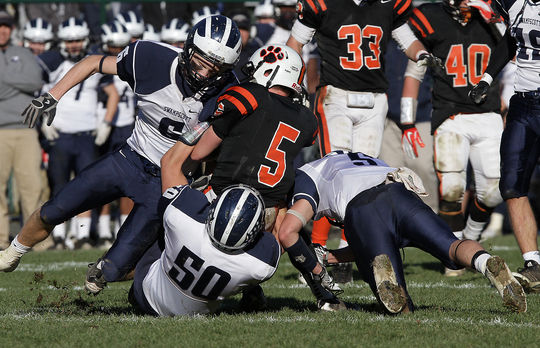 Swampscott's Aidan Lang manages to hold onto the ball despite a big hit from Beverly's Nick Theriault on Saturday.

BEVERLY — Dialing up a trick play in a big game takes guts, for sure. But what it really takes is a sense of calm from the players charged with executing it.

At perhaps the most emotional point of Saturday's Northeastern Conference/Cape Ann League Tier 2 clash, Swampscott's Mike Walsh and A.J. Baker had nerves of steel — executing a wide receiver pass back to the quarterback for a touchdown that sent visiting Big Blue on their way to a 21-13 win over Beverly in front of 3,500 fans at Hurd Stadium.

Swampscott (8-1) snapped a three-year skid against Beverly (6-3) and, at 3-0 in league play (along with Marblehead), put itself in the driver's seat of the Tier 2 chase.

The win was also the 100th of head coach Steve Dembowski's career.

"This ball, right here, is going to coach," Walsh said, still clutching the game football 15 minutes after the final whistle. "We haven't beat Beverly since I was in eighth grade; to come in here and get a win is huge. I couldn't be happier."

The Big Blue took the lead for good with tomfoolery that came just two snaps after Beverly's Dan Brown laid out Swampscott's Richard Sullivan with a huge hit that had emotions high on both sides. The Panthers, ahead 13-7 at the time, were charged up by the big tackle and the Big Blue were looking for a flag for either helmet-to-helmet contact or over-celebration.

On the second snap after the hit, Baker lined up wide to the right and Walsh threw it out to his favorite target. Baker, however, stopped in his tracks and hit Walsh with a dart on the opposite side of the field. The QB-turned pass catcher then outran the Beverly defense 49 yards to the end zone, and with Nick Meninno's second of three PATs, the Big Blue led 14-13.

"A.J. threw it right on target, and I kind of slipped, but thank God I held it in and got there for the score," said Walsh, who scored all three Big Blue touchdowns. "That's one of our best trick plays — and we executed it."

Swampscott spent the majority of the second half running into the teeth of the Beverly defense. Evan Rhodes (71 yards on 8 carries) and Walsh (81 yards rushing) ran the Big Blue's read-option to perfection on a 75-yard scoring drive, capped by Walsh's 13-yard TD scamper to extend Swampscott's lead to 21-13 early in the fourth quarter.

"We wanted to pound it, take away the clock and get enough points to win," Walsh said. "Our offensive line was fantastic (Saturday), and we needed that to beat these guys."

The Panthers had two drives that spanned more than five minutes in the second half, but couldn't finish either with points. The Big Blue came up with the stop of the afternoon when Panther QB Dave Rollins' fourth-down keeper fell centimeters short of a first down at the Big Blue 7-yard line with only 4:16 remaining.

"We had momentum and rhythm (in the first half) and weren't able to establish that in the second," said Beverly head coach Dan Bauer, his team now 2-1 in Tier 2. "If you look at this game, it was big plays. They had a couple more big plays than we did in a big game."

The Panthers' big plays came from running back Brendan Flaherty, who had 227 all-purpose yards (137 rushing, 90 receiving). The junior cut back for a 49-yard score on the game's first drive and caught a 26-yard TD pass from Rollins (108 yards passing) as Beverly found the end zone on its first two possessions.

Swampscott's defense adjusted, though, and with the help of a missed field goal at the end of the first half held Beverly off the scoreboard the rest of the way. Frank Legere's end zone interception for the Big Blue was a turning point as well.

"That play was all hustle. Frank embodies what our team is," Dembowski said.

Walsh had a tough time throwing, going 12-of-21 for 107 yards. Besides two long screens that were called back due to illegal blocks, the Panthers had Swampscott's bread-and-butter short screen game snuffed out all afternoon. That forced Walsh to look downfield, where passes are harder to complete.

"I have to credit our defense for doing the adjustments we threw at them, and also our demo (i.e., scout) team who worked hard all week to re-create those plays," Bauer said.

Sullivan, who did return after taking the big hit, and Meninno each had three catches for Swampscott.