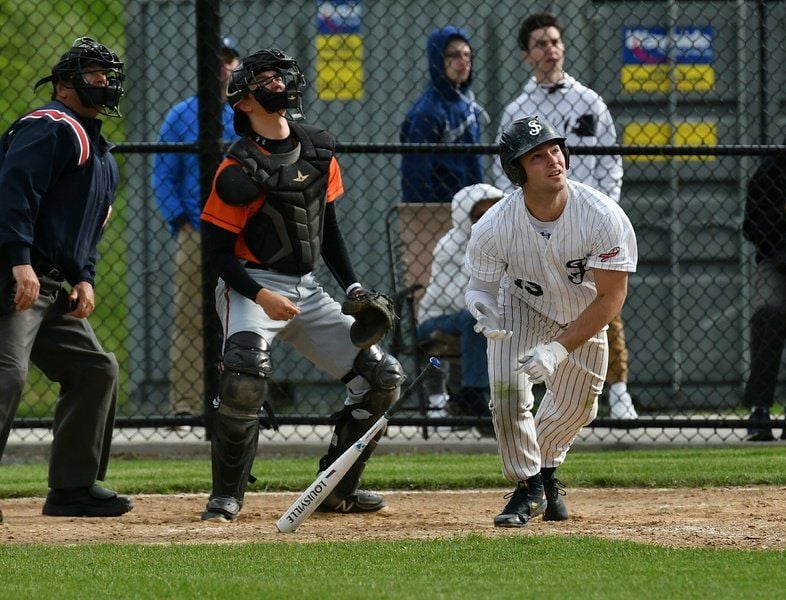 Rose Raymond photosJack Cairns of St. John’s Prep tracks the flight of the ball as Beverly catcher Matt Ploszay and the umpire look on. 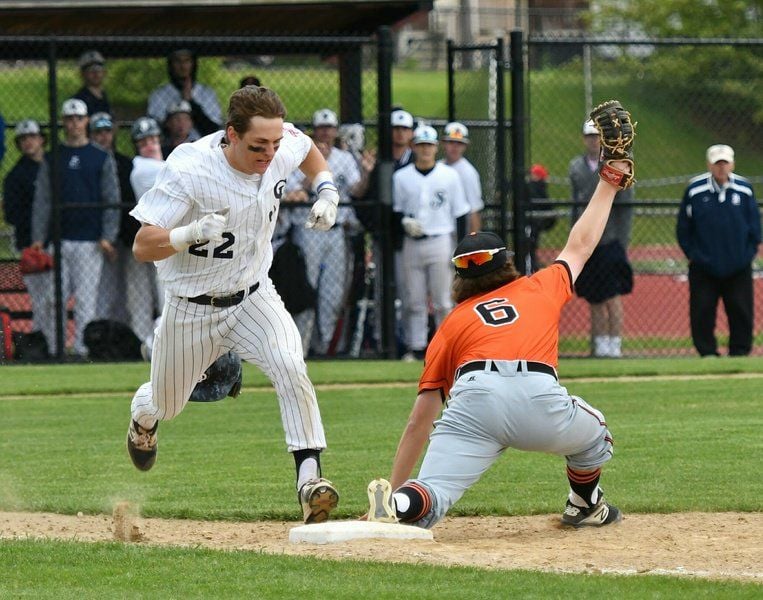 Rose Raymond photoBeverly’s Conor Hanlon stretches to get the throw as St. John’s Prep’s Will Potdevin races through the bag. 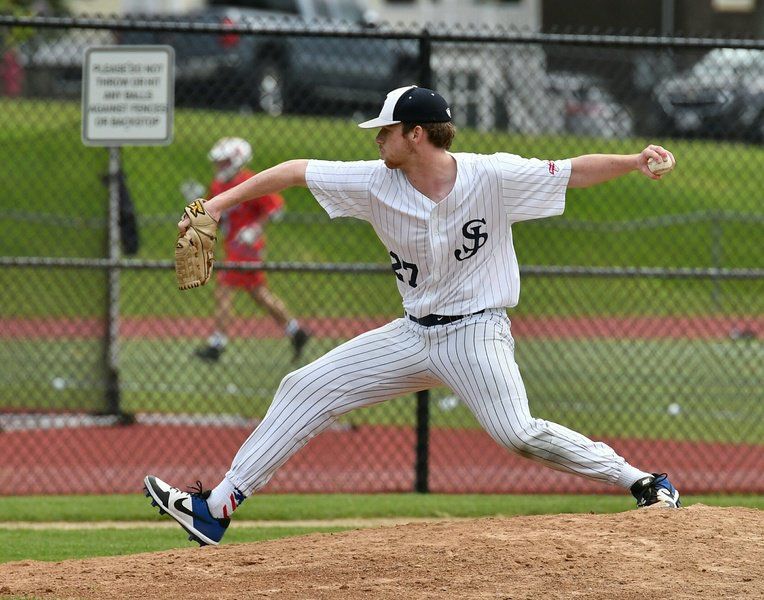 Eddie Hardiman picked up his second win with two relief innings on Friday at Beverly. 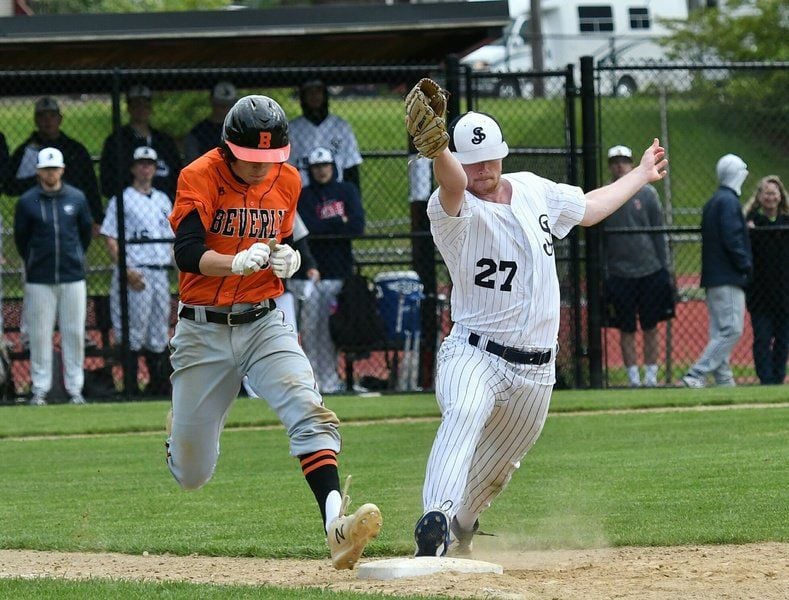 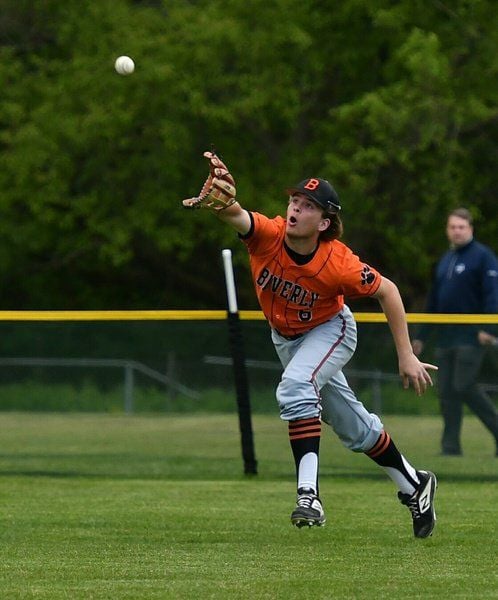 Beverly center fielder Conor Hanlon makes an extended snag for an out. 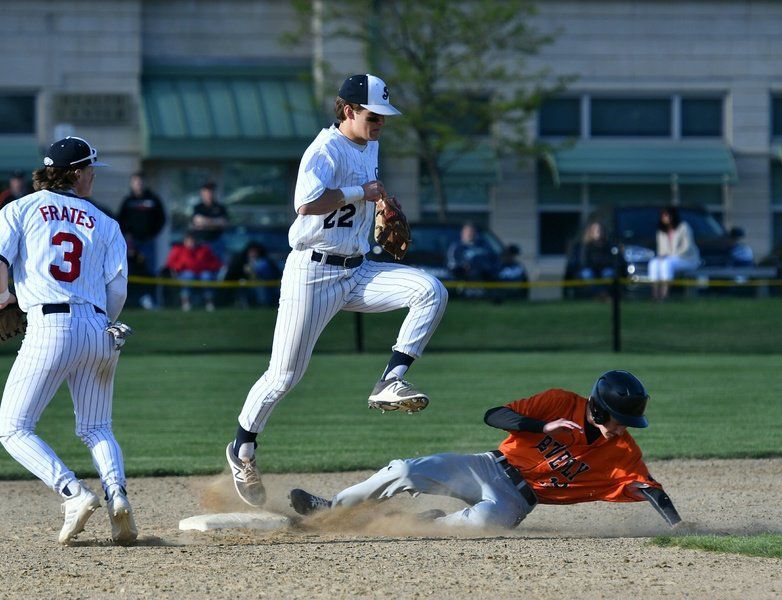 Beverly's Brennan Frost slides to break up a double play as St. John's Will Potdevin steps on second base. Rose Raymond photo 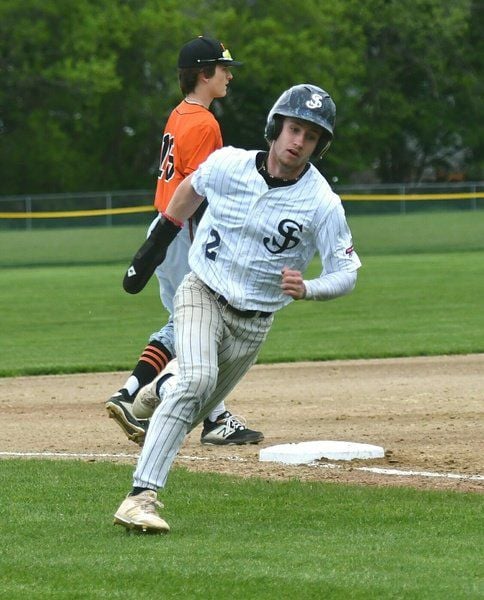 Rose Raymond photosJack Cairns of St. John’s Prep tracks the flight of the ball as Beverly catcher Matt Ploszay and the umpire look on.

Rose Raymond photoBeverly’s Conor Hanlon stretches to get the throw as St. John’s Prep’s Will Potdevin races through the bag.

Eddie Hardiman picked up his second win with two relief innings on Friday at Beverly.

Beverly center fielder Conor Hanlon makes an extended snag for an out.

Beverly's Brennan Frost slides to break up a double play as St. John's Will Potdevin steps on second base. Rose Raymond photo

With timely hitting and great defense serving as their OFF bug spray, visiting St. John’s Prep still didn’t know if they’d avoid being bit until the final out of a pressure-packed seventh inning.

Matt Waelter closed the door after Beverly brought the tying run to the plate to ensure that St. John’s emerged with a 7-4 win.

In the first meeting between these clubs since the 2009 Division 1 state playoffs, 2-run homers by the Prep’s Will Potdevin (to tie the game in the 4th) and Richie Williams (to break that tie in the 6th) proved to be the difference.

“It was good to see us swinging the sticks. We had some deep balls where we haven’t gotten many this year,” said Prep head coach Dan Letarte, his team now 13-4. The Catholic Conference champs and likely Super 8 invitees wore their No. 3 Frates jerseys for their trip to Pete’s hometown, a meaningful gesture in what Letarte hopes is a long rivalry with friend and new Panthers head coach Jon Cahill.

“It was great to play here. Jon’s a great coach with a good team,” said Letarte. “Coming in here you know you’re going to get a game — and that’s what happened.”

Beverly, 9-9 but 9-8 for tournament purposes, was playing for the fifth time in as many days. With an exhausted pitching staff, the Panthers used seven pitchers for one inning each to try to contain the powerful Eagles, including several making their varsity debuts.

Kyle Camara, Logan Jalbert, Christian Morrissey, Owen Desmond, Shane Cassidy, Brennan Frost and Cooper Gavin limited the Prep to a combined six hits, but combined for a costly eight walks — and of the seven runs St. John’s scored, four got on board via free passes.

“The guys competed really well. The Prep is one of the elite teams around and we wanted to expose some of the young guys to that level of competition,” Cahill said. “We have confidence in all of them. We told them to go out and throw strikes; obviously we want to clean up the free bases. We need to win the free base battle and continue to play great defense.”

The Panthers outhit the Eagles, 11-6, stringing together four in the third frame to take a 4-2 lead. Nick McIntyre (3-for-4) and Frost singled, Tyler Petrosino hit an RBI single and Matt Ploszay followed with a sacrifice fly to tie the game. Seniors Clayton McAlpine (single) and Conor Hanlon (sac fly) followed with RBI to put the hosts on top.

“The Prep has a lot of good arms, no question about it, and we were right there,” Cahill said. “We wanted to have good at-bats with some attitude and confidence and we were able to do that.”

After Potdevin’s bomb squared things at 4-4, Beverly threatened to take the lead twice. Eddie Hardiman, who wrangled the win for the Eagles, got out of a bases loaded jam in the fourth and worked around singles by Cassidy and McIntyre with a powerful strikeout to end the fifth.

“The pressure was on for Eddie and he responded. Beverly was never out of the game, and it was good to see our guys get out of those spots,” said Letarte, who saw Ryan Bradley throw overpowering fastballs for three K’s around a Petrosino double in the sixth.

“Ryan’s been good for us all year, and it was good to see him hang a zero there. We needed it.”

Williams’ one-out blast in the top of the sixth gave the Eagles the lead for good. Alex Lane and Will Frain (2-for-4) followed with singles to pad the lead by one at 7-4. Rodney Nyborg (walk) and D.J. Pacheco (walk) also scored runs for St. John’s and Jack Cairns swiped a base.

Desmond and Cassidy hit back-to-back out-out singles for Beverly off Waelter in the seventh to get the tying run to the plate. Waelter bore down, though, to retire the side with a fielder’s choice and a fly out to earn the save.

“We were in it the whole way,” Cahill said. “Even at the end of the ball game, you get the tying run to the plate and that’s a good situation. That’s all you can ask for.”