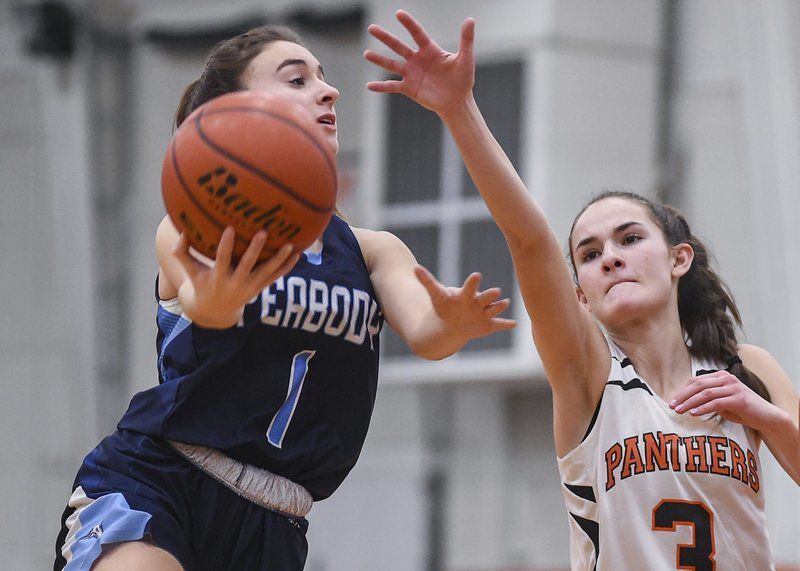 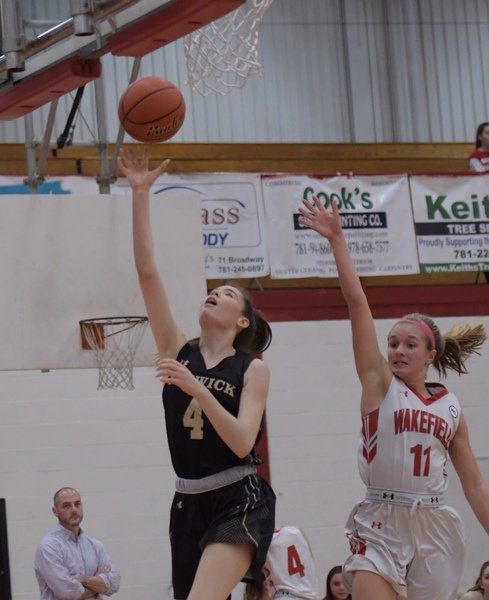 Rose Raymond photoBrynn Bertucci and Bishop Fenwick will look at win back the Larry McIntire tournament title this weekend, opening against rival Peabody. 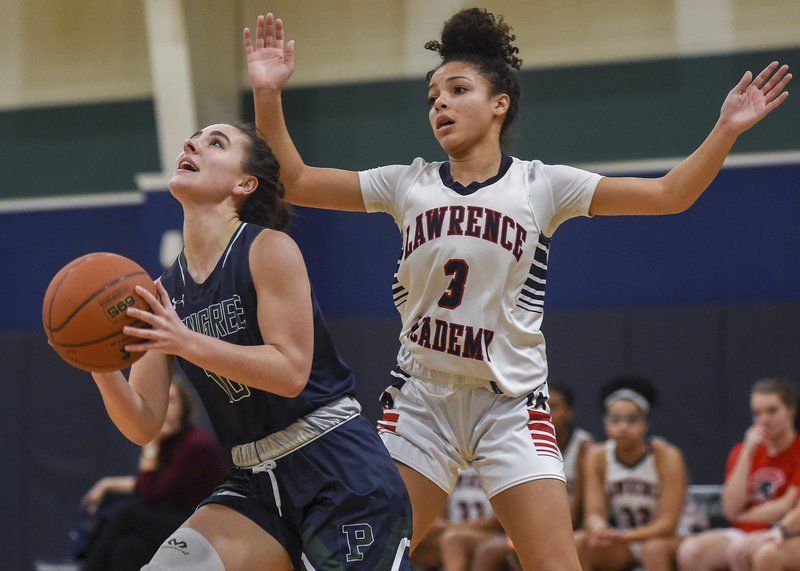 Rose Raymond photoBrynn Bertucci and Bishop Fenwick will look at win back the Larry McIntire tournament title this weekend, opening against rival Peabody.

Basketball season is winding down to a precious few games remaining before state tournament time for those teams lucky enough to qualify. A couple of big in-season tournaments will take place first, including the Larry McIntire IAABO Board 130 Classic at Beverly High on Sunday and Monday.

Peabody and Bishop Fenwick’s girls play at 1 p.m. followed by Beverly-Revere at 4:15 with winners meeting in the championship game on Monday. There will also be some great boys games to take in with Gloucester and Fenwick followed at 6 p.m. by Masco-Beverly in the last game of opening day activities with consolation and championship games on Monday.

Over in Danvers the annual Ed Gieras Tourney will take place on Tuesday and Wednesday. Danvers girls face Newburyport at 7 p.m. on the first night after Reading and North Reading meet in the opener. The winners play for the championship on Wednesday night. Gieras was the all-time leading scorer for the Falcons and tragically passed away from Huntington’s Disease in 2015.

The MIAA tournament picture is coming into focus. Marblehead, Masconomet, Beverly, and Fenwick have already qualified and Danvers will get in with one more win. The Falcons upset Marblehead last Friday night while Beverly was stunned by Peabody on a buzzer beater by freshman Taylor Bettencourt, who drained a 3-pointer as time expired.

The Falcons want to finish strong while Peabody is a long shot (7-10) but much improved over the second half of the season. Danvers handled Gloucester with ease, 45-26 for the ninth win of the year, and the Tanners topped Swampscott led by captain Emily Carney with 17 points.

In the Cape Ann League Masconomet has hit a bump in the road after qualifying. The Lady Chieftains suffered four straight league losses to Lynnfield, Newburyport, Bob Romeo’s North Reading team at home on successive Friday nights before dropping another to Amesbury. The Lady Chieftains are 11-5 overall, 10-4 in the league. They are at league leading Pentucket tonight for another Friday night special before ending the regular season at the Spartan Classic at St. Mary’s of Lynn, taking on Billerica in the first game.

Fenwick will represent the Catholic Central League come tourney time, but will be without junior center and leading scorer and rebounder Annie Murphy the rest of the way.

“She sprained her ankle, and probably will not return,” said coach Adam DeBaggis. “Junior Brynn Bertucci will probably get most of the time in her place. She was great last Friday night with 13 points and 14 rebounds (in win over Austin Prep). Hopefully, Brynn can continue that trend moving forward. She’s been great all year, but played behind Annie. We’re hoping she can continue her solid play throughout the rest of the season.”

Murphy averaged 13.5 points per game and 10 rebounds. She was a dominant force in the middle and also at the foul line.

Last week was a good one for two local players who joined the exclusive 1,000 point club. Pingree’s Madison Mandalinci became the third girl in school history to reach 1,000 points in the win over Phillips Exeter. Mandalinci is the top scorer in our readership area with an average 17.5 points per game. The Highlanders are 11-6 and have only lost one game in the league. Mandalinci, a guard, who will play at Union College, joins Jen Spencer (1988) and Colby Shea ( 2018).

Beverly’s Hailey Anderson did it against Peabody with a tremendous individual effort, scoring 36 points. She is only the second girl in Panther history to achieve this distinction, joining Laura Sullivan.

Because Anderson hit the big mark on the road the celebration took place before the Marblehead game on Senior Night at Henry Cabot Lodge. The team wore hot pink warmup shirts they had written “We love our seniors” on the back with the numbers of Anderson and the fellow captains Tia Bernard and Viana Kotchian. The three seniors all wore pink shirts reading “Senior 2020” on the front.

The field house was decorated with a large banner commemorating Anderson’s feat and big gold numbers 1000 on the wall behind the benches. There were big silver balloons with numbers 3, 22, and 23 for three senior captains. Coach Seth Stantial presented Anderson with a signed basketball, and her sister Sydney (a junior on the team) was called out to center court along with parents for pictures.

The three seniors received flowers and had pictures taken with their parents. Eric Kotchian got fans laughing when he took a selfie with his daughter. Flowers were given to the three Marblehead graduating players Simone Rinaldi, Camille Comstock, and Maddy Lowy. The game came down to the wire with the NEC North champion Magicians winning in the final seconds, 42-39 in their last game of the regular season (17-3). Marblehead totally turned things around for a losing record two years ago and 10-10 last season.

Hamilton-Wenham has scored close to 33 percent of their total points on the long shots, hitting 82 treys with several girls contributing. Sarah Cooke and Maddy Rivers lead the way with 16 each while Belle Dolan and Riley Clarke both have 13. Clarke’s have come in limited minutes off the bench. Jemma Shea (9) and Kailee Whelan (7) are also outside threats.

Rivers, a senior guard, is the leading scorer on the team, averaging 10.7 points per game with a season high 18 against Manchester-Essex. She also leads the Lady Generals in rebounding (6.5 per game) for the 9-9 Lady Generals, who are almost certain to make the tournament.

“Maddy is having a tremendous year,” said first year coach Mark Cole. “She is doing a great job running our offense and has added the outside shot to her game this season. She had a phenomenal game against Lynnfield with 23 points and eight rebounds. Madddy has played her best against the top teams in the league with 23, 18 (Manchester-Essex), 11 (Newburyport), and 14 (Pentucket). She is the heart and soul of this team, barely comes off the floor, and covers the other team’s point guard.”

H-W is in second place in the CAL Baker division behind Amesbury after posting a big win over Ipswich.

Essex Tech has a very young team with no seniors. The three captains are juniors Katie Napoli, Molly Wetherbee and Kristen Curley.

“They’ve been great leaders and all add a different aspect to each game that helps out the team,” said second year coach Greg O’Brien. “Kristen does a great job rebounding and leads the team in that category. Molly can add a spark to the offense when we need a big shot, and Katie is one of the best defenders we have, consistently covering the opposing team’s best player.”

Another key player is Brianna Pothier, a sophomore, who has improved her game tremendously. When she is dialed in (9.8 points per game and 30 3-pointers) she is able take charge. Pothier had 16 points in the 31-26 win over Rockport earlier this week and a like number in the victory ovr Lynn Tech.

“Brianna calms the floor don because she is one of our strongest players handling the ball so we rely on her a lot when we are facing an aggressive defense. She can also score very quickly which helps break the ice for the team and get the offense going.”

O’Brien said over the course of the season Pothier has become a stronger and more confident player, and he is excited to see what jump she will make going into next season.

“Although the program is still progressing to the level we want to be at (7-12), we have made great strides this season, and a lot can be attributed to the players we have in the program that are willing to put in work to get better,” said O’Brien. “Our leaders have helped create a good culture on the team that had been missing, and it shows as we are getting better every game.”

One freshman to keep an eye on is Swampscott’s Niya Morgen, who has 232 points in 17 games, averaging 13.65 per game and has made 42 shots from 3-point land. Big Blue is a very young team and should be much better next season.

Bounce Passes, a column on North Shore girls basketball, appears in The Salem News each Friday during the winter season. You can contact Jean DePlacido at JMDeplacido@aol.com and follow along on Twitter @JeanDePlacidoSN.