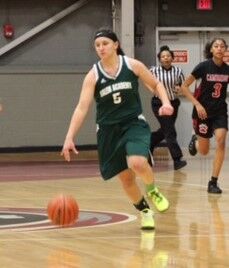 Salem Academy junior Cindy Shehu has already surpassed 1,000 career points and is a two-time captain for the Navigators. 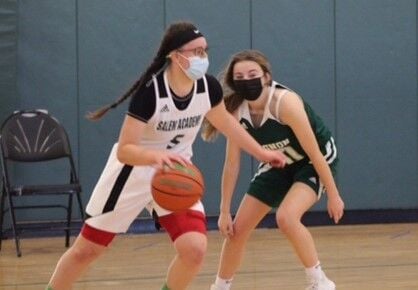 Quick off the dribble and able to attack the basket is just one of the many ways in which Cindy Shehu helps the Salem Academy Charter School girls basketball squad. 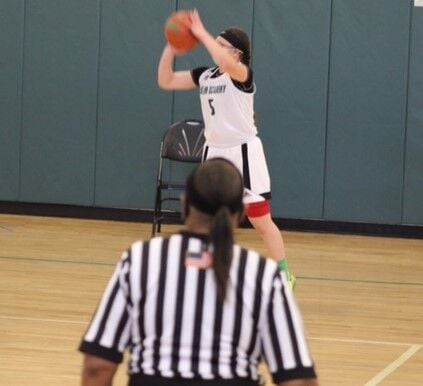 No matter where she is on the court, Cindy Shehu has the range to bury shots for Salem Academy.

Salem Academy junior Cindy Shehu has already surpassed 1,000 career points and is a two-time captain for the Navigators.

Quick off the dribble and able to attack the basket is just one of the many ways in which Cindy Shehu helps the Salem Academy Charter School girls basketball squad.

No matter where she is on the court, Cindy Shehu has the range to bury shots for Salem Academy.

Cindy Shehu has made a name for herself at Salem Academy Charter School — and she’s far from done leaving her mark there.

The junior is a talented-three sport athlete in soccer, basketball and softball. On the hardcourt Shehu is a captain for the second straight season, one who is leading the Navigators in points her game (22.6), rebounds (10.6) and 3-pointers (7). An unselfish player, she also averages 3.4 assists per contest.

Last year as a sophomore, Shehu joined the 1,000 Point Club for her career. This winter against Pioneer Charter School of Science the Salem native was unstoppable in scoring 41 points, guiding her team to victory.

“I’m very aggressive and fight for every ball,” said Shehu, who also plays soccer and softball with the same intensity. “I think the best part of my game is defense, and I love to grab rebounds or go after balls on the floor.”

Shehu is hard to miss on the court because she’s in constant motion and always a threat to steal the ball.

For the last three years SACS has been very successful with 10 or more wins. Although they’re young this season, Shehu doesn’t expect anything less.

“We have really good team chemistry and work well with the ball,” she said, who has played hoop since the third grade. She played wherever she was needed on the court until she got to Salem Academy, where former coach Tony Gallo gave her a permanent spot her at guard.

“Getting 1,000 points as a sophomore was a pretty big accomplishment,” she added, “and my goal this season was to keep getting better throughout the year. I want to see if I can play at the college level, hopefully Division 2 or maybe even Division 1.”

The 5-foot-5 Shehu is also a good student and is thinking about majoring in the health sciences at the next level. She isn’t just looking for a strong basketball program, but a college that is strong both academically and athletically.

“I used to play softball year-round, but now it’s basketball,” said Shehu. “My club is the MCW Stars, which is fun and helps me keep improving my skills.”

Sophomore Kianny Mirabal-Nunez is co-captain for the Navigators along with Shehu. Freshman point guard Raizel Obrero has stepped up to play a key role for new coach Meaghan Fitzgerald, who had helped out with the team in the past before taking over as head coach this season.

“Cindy is a talented athlete and a natural leader,” said Fitzgerald, a health and physical education teacher. “She is a consistent leading scorer with a vast knowledge of the game and always willing to help and encourage her teammates. Along with her knowledge, she is highly competitive, which elevates our team’s play in games. It’s been a pleasure coaching her over the past few years.”

“We have a lot back from last year’s team,” added Shehu. “Raizel is doing a great job and Kianny really contributes a lot. We try to encourage participation and get the numbers up by being positive with the girls that come out.

“I think defense is the best part of my game, and I’m concentrating on being even better,” she added. “I don’t think about how many points I get; I just want to help my team win.”

The schedule for just about every team has been disrupted by COVID complications this winter, either with teams short-handed or having their opponent cancel because of the virus. On top of that ,last Friday’s snowstorm forced more rescheduling.

It’s been tough for local squads to get into any rhythm, and long layoffs between games affect both good teams and ones struggling to get it all together. Hopefully, the situation will start to improve.

Bishop Fenwick (4-2) was hoping to bounce back quickly after a loss to Rockland in the championship game of the Christmas Classic and was gearing up for a big week with games against both Franklin and Catholic Central League St. Mary’s of Lynn, only to have both postponed. That meant a 14-day layoff before the Crusaders are back in action, hosting powerful St. Mary’s Wednesday night.

Salem High head coach Evie Oquendo said her squad’s scheduled games late week were all called off, but now the Witches are ready to get going again. They took care of business against Pioneer Charter School Monday night as Amaya McConney scored 24 points, Yamilette Guerrero added 14 points and six rebounds, and Cassadi O’Leary finished with 11 points and a half-dozen rebounds.

Beverly had played only five games before its game against Northeastern Conference rival Marblehead was moved from Friday to Sunday because of the snow.

The Panthers have a very young squad with four sophomores and three freshmen. They have been steadily improving and put it all together to grind out a 40-38 win over the Magicians, and are hoping that momentum carries over.

“This year almost every player is seeing the most varsity minutes they’ve ever played, whether they’re seniors or freshmen,” said head coach Seth Stantial, who has three 12th graders and three more 9th graders. “Except for senior Angelina Mazzone, every player has had a bigger role than ever.

“Each kid is working as hard as they can in practice to get better. I think sophomores Molly Potter and Lauren Caley are starting to grow into their new roles. Junior Olivia Griffin has been as consistent as I could ask any girl to be, and another junior, Nylah Ollivierre, is tremendous bringing energy and effort every time she’s on the court.”

“I have a lot of faith in the girls on our team to get where we need to go,” said Stantial. “We just need to focus on the everyday improvement. We can’t get stuck looking at the big picture.”

Caley is one player to watch. She led the Orange-and-Black with a game-high 15 points, including three bombs in the win over Marblehead.

Bounce Passes, a column on North Shore high school girls basketball, appears each week in The Salem News during the winter sports season. Contact Jean DePlacido at jmdeplacido@aol.com and follow her on Twitter: @JeanDePlacidoSN.