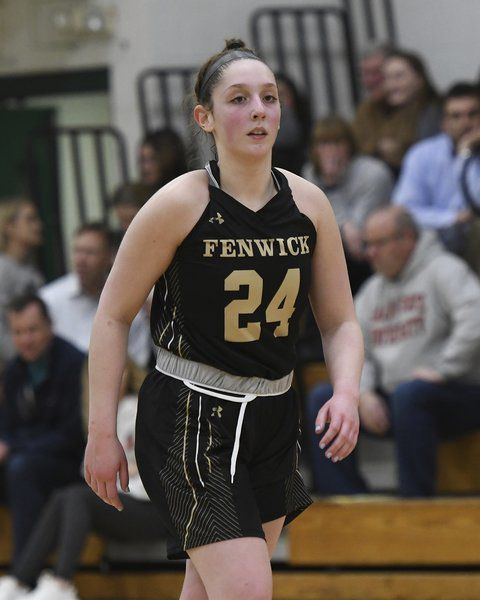 Rose Raymond photosJunior captain Liz Gonzalez is one of the big reasons Bishop Fenwick is off to a 5-1 start this season. 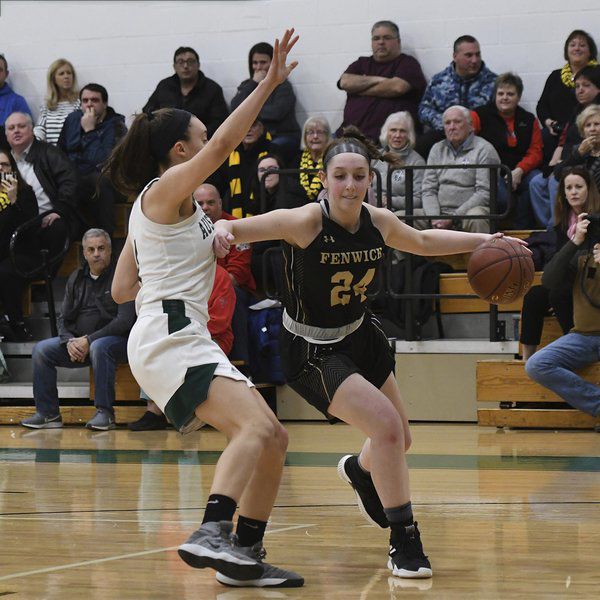 A three-year varsity player at Bishop Fenwick, junior captain liz Gonzalez can score by taking it to the basket or burying jumpers from the outside. Rose Raymond photo 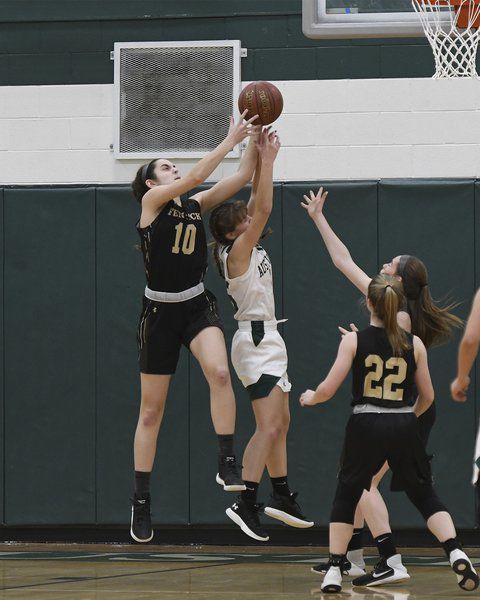 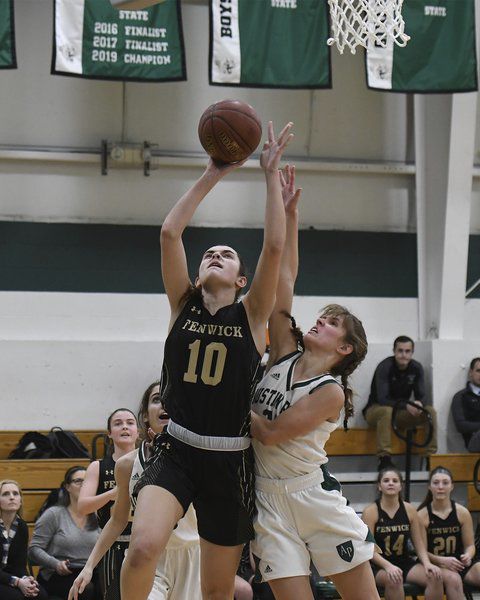 Junior center Annie Murphy has been a force down low for Bishop Fenwick this winter, averaging 14 points and more than 11 rebounds a game.

Rose Raymond photosJunior captain Liz Gonzalez is one of the big reasons Bishop Fenwick is off to a 5-1 start this season.

A three-year varsity player at Bishop Fenwick, junior captain liz Gonzalez can score by taking it to the basket or burying jumpers from the outside. Rose Raymond photo

Junior center Annie Murphy has been a force down low for Bishop Fenwick this winter, averaging 14 points and more than 11 rebounds a game.

With just one senior on the roster and several of the program’s best players from a year ago lost to graduation, one might assume this would be a rebuilding season for the Bishop Fenwick girls basketball team.

That assumption would be incorrect.

The Crusaders are up and running; reloading instead of rebuilding. They’re off to a great start with a 5-1 record, with their only loss thus far to highly ranked Cathedral.

Senior guard Micayla Rossi and junior guard Liz Gonzalez from Peabody are the team’s co-captains. A pair of juniors, center Annie Murphy from Wenham and guard Veronica Tache of Middleton are both key contributors as well.

“We’re a young team and are learning from our mistakes to improve,” said ninth-year head coach Adam DeBaggis. “We’re hoping to play our best basketball in February and March.”

Despite being a little sloppy at times, said DeBeggis, the girls are off to a very good start. They managed to pull out tight victories against Reading, Wakefield and Cardinal Spellman.

Their latest close contest wasn’t decided until overtime when the Crusaders went on the road to defeat Austin Prep, 42-35. Tache made a key hoop with 20 seconds left in regulation, and it was all Fenwick in the overtime. Gonzalez led the way with 11 points, eight boards and four steals.

“Liz and Micayla are strong leaders who help our young kids and set a good example by building up their confidence,” said DeBaggis. “Liz is a three-year varsity player, coming through the trials of being a new freshman to now, where she’s a full blown leader. She loves her role,and has no time to worry about herself this season. Micayla is also a natural leader.”

Having a 6-foot-2 powerful center in Murphy has also played into the Crusaders’ success. She is an inside threat, a monster on the boards, and can hit most of her foul shots.

“She has height matched with athleticism,” said DeBaggis. “Annie is aggressive on post-up play, can also hit outside shots, and when she’s fouled is a sure shot at the line. She made 13-of-15 against Beverly, a game that was close all the way. Annie gets to the free throw line a lot, and we want to get the ball to her down low.”

Murphy has taken her game to a new level this season. She credits her good foul shooting to the time the team spends working on it in practice, and said it’s a matter of mental toughness to make those shots when you have the opportunity.

“I like how close we all are,” said Murphy, who is averaging 14 points and 11.3 rebounds per game. “We spend a lot of time together so we have a very close bond. A different girl steps up in each game, doing whatever it takes to win games. Team-first is always the mentality.

“Each day we set goals for practice or games that we try to achieve as a team,” Murphy added. “My personal goals are to make my teammates better and to help us win games, whether that’s through scoring or rebounding or getting my teammates open shots.”

She comes from a basketball family, as her father Tod Murphy has been head coach of the Gordon men’s team since 2009.

“Annie has always been a big part of our team, but I think being a sophomore last year she was deferential to the older girls,” said DeBaggis. “This season the opportunity is there for her to take what she can — and that’s what she’s doing. Tache is another one who has gone from a small role to a bigger one.”

The Crusaders are in the midst of a stretch away from the friendly confines of their bandbox gym on Margin Street. The victory over Austin Prep was the first of five straight road contests.

“We want to go to the state tourney again,” said Gonzalez. “We’re off to a good start and that’s been one of our main team goals, but we also need to focus on taking it one step at a time. It’s a matter of concentrating on the next play, the next game, and using every practice and drill to keep improving.

“As a captain, especially being a junior, there’s a lot more responsibility,” continued Gonzalez. “Last year we had so many returning players, but this time there are so many younger girls. Micayla and I try to show them what we need to do to get better.”

Gonzalez realizes her role is a bit different this season, and she embraces it. She stresses the fact that what is most important is playing as a team. She had a big game in Fenwick’s 45-37 win over Cardinal Spellman with a dozen points and six rebounds, while Tache was also in double figures that night with 13.

“We need to get everybody involved,” Gonzalez said. “I try to find ways to get my teammates set up and help with defense and rebounding.

“A lot of younger girls have stepped up, including our three freshmen (Isabella Romero and Erica Lendall from Peabody along with Beverly’s Morginn Kotchian). We have different girls scoring a lot of points each night, and Annie is a great source of offense. If she’s double teamed, we have to kick it out to find others to help score points. Her height really makes a difference; I’m so glad we have her.”

Gonzalez loves playing in the Fenwick gym, where the fans are very loud and defense is a key to victory.

“Coaching-wise, it’s very different this season,” said DeBaggis. “We count on Liz, Veronica and Annie every game, but it seems like there’s somebody different stepping up each night. That makes my job a lot of fun because I never know who will have the hot hand. It’s great to put somebody in the game and have the girl make a big play right away.”

Peabody lost a heartbreaker to Swampscott earlier this week, 36-34, on two free throws in the closing seconds. The young Tanners are 1-5, but coach Stan McKeen sees his team getting better.

Freshman Isabel Bettencourt led Peabody with 11 points against Big Blue while Amber Kiricoples had 13 rebounds and seven points. Kiricoples followed that performance up with a double, double in the loss to Marblehead. She had a dozen points and grabbed 13 rebounds.

“It’s a work in progress,” said McKeen. “I thought all three freshmen — Isabel, Taylor Bettencourt and Lauren Mendonca played really well against Swampscott. Taylor’s defense was outstanding, pretty much shutting down their top scorer, and Isabel controlled the game offensively by hitting threes. Mendonca did a great job on the boards at both ends, too.

“The goal is to continue to improve as a team.”

Hamilton-Wenham had a big 53-32 win recently over Georgetown. The Generals jumped out to a 26-2 lead in the first eight minutes after lights out shooting with four 3-pointers, and head coach Mark Cole started substituting very early. Belle Dolan led the way with 10 points while Maddy Rivers had nine. Dolan and Riley Clarke each made two treys while Jemma Shea and Rivers each had one.

“That’s as good a quarter as we’ve played all year,” said Cole.

Salem Academy is off to a very good 5-3 start, and there’s no question they want to qualify for the state playoffs.

“Our girls are a very hard working, high character group, focused on improving every day,” said head coach Tony Gallo. “With six seniors, the ultimate goal is to qualify for playoffs and see how far we can go. The girls are great to be around and continue to improve all the time.”

Cindy Shehu is averaging 14.5 points per game while Lindsey Russell has 9.1 ppg. Erin Keenan leads the team in rebounding with 7.4 per game.

Bounce Passes, a column on North Shore girls high school basketball, appears each Friday during the winter sports season in The Salem News. Contact Jean DePlacido at jmdeplacido@aol.com and follow her on Twitter @JeanDePlacidoSN