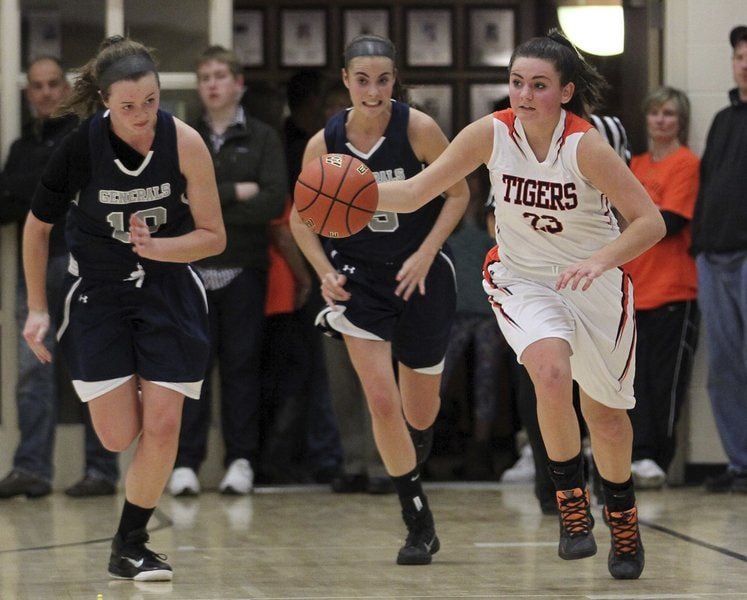 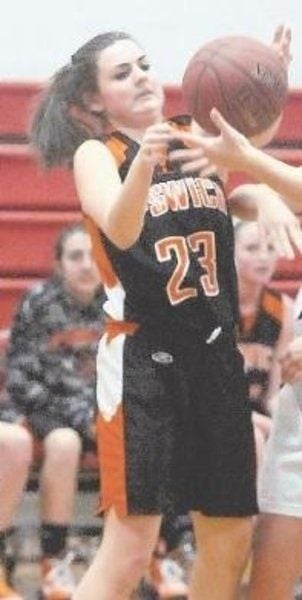 Jenna Gagnon will be a two-time captain for the Tigers in this, her senior season.

Jenna Gagnon will be a two-time captain for the Tigers in this, her senior season.

IPSWICH — Opponents often game plan for her and manipulate their defense according to where she is on the court.

Ever since Jenna Gagnon stepped on the hardwood as a freshman at Ipswich High School, her talent was known. She’s a pure shooter, dangerous from 3-point land, and her ability to pull up and shoot the deep ball looks effortless at times. But it hasn’t been without countless hours of practice over the years.

“Jenna could always shoot. She had some really exciting youth travel games, hitting big shots before she got to high school,” said Gagnon’s MCW Starz coach and former Ipswich head coach, Mandy Carter Zegarowski. “She was labeled as a ‘shooter’ since the 6th grade.”

This past Sunday in a makeup game against Manchester Essex, Gagnon netted her 1,000th career point as a Tiger. She needed 10 heading into the contest and finished the night with 11.

“I was very nervous heading into the game,” noted Gagnon, who earned Cape Ann League Player of the Year honors last March. “The whole time I was counting down because I knew I needed 10. Once I hit it, I was so relieved.”

As a freshman, she earned big minutes as a role player on a talented roster who could knock down big-time shots. During her sophomore year, Gagnon became the primary go-to player for IHS, something that has stayed true ever since.

“I came on to the team and I was shy and quiet at first, so I sat in the corner and shot the ball,” explained Gagnon, a two-time Salem News all-star. “Sophomore and junior year I had to kind of take over. This milestone means a lot because I worked really hard for it.”

Stepping up for Gagnon meant letting her actions on the court speak for her. Her quiet demeanor is still there, but once she hits the floor her game does the talking — especially as the current leading scorer in The Salem News coverage area with 15.9 points per game.

This winter Gagnon’s eclipsed the 20-point mark on four separate occasions — even scoring 29 points in a non-league contest against Whittier. She’s made over 40 3-pointers this year as well, already having surpassed her total from last season.

Gagnon’s skills aren’t limited to just shooting, either. As a 2-guard for both Ipswich and MCW Starz, Gagnon has developed into one of the best rebounders on each team.

“Jenna was second in rebounding on my AAU team this summer,” said Carter Zegarowski. “She has great size for a 2-guard and her rebounding is underrated.

“She has also had to fight through box-and-ones and face-guarding since sophomore year; that isn’t easy and can get very frustrating. Jenna has matured each year and worked hard to get open.”

The Tigers have made the tournament the past three years, including a deep Division 3 playoff run when Gagnon was a freshman. At 5-12 now, Ipswich is out of postseason contention this season.

There are numerous tournaments going on over the weekend and the beginning of next week.

The 2016 Spartan Classic, hosted by St. Mary’s, will take place on Sunday and Monday in Lynn. The tourney features three different divisions with 12 total teams involved, including Masconomet, Pentucket and Revere.

On Monday and Tuesday, Hamilton-Wenham is hosting its annual General Patton Tournament. This year it includes Beverly, Dracut and Wakefield.

Marblehead is hosting the 5th annual Brad Sheridan Memorial Basketball Tournament, for both boys and girls teams. On the girls side; it’s Bedford, Tewksbury and Pope John in addition to the hosts on Tuesday, while consolation and championship games will be played on Thursday.

Finally, Danvers is hosting the inaugural Ed Gieras Memorial Girls’ Basketball Tournament on Tuesday and Wednesday. The four-team tournament features the Falcons, Bishop Fenwick, Reading and Concord-Carlisle. The proceeds for the event will the Huntington’s Disease Society of America. Gieras, a former Danvers High and Salem State University basketball great, passed away last April after a long battle with Huntington’s Disease.

Masconomet is putting Wednesday’s 43-23 loss to Pentucket far behind them. The Chieftains (9-6) are focused on qualifying for the postseason and Friday’s opponent — Newburyport.

Wednesday’s defeat was vastly different from the first time the Sachems and Chieftains squared off. Masco dominated from start to finish back in the January contest, but Pentucket returned the favor this week.

The Chieftains scored seven baskets the entire game and put up six points in the first half. The Sachems, meanwhile, netted seven 3-pointers in the victory.

“They were just much more aggressive defensively and it just wasn’t our night,” noted Masconomet head coach Bob Romeo. “Pentucket played the game like it meant something to them and it did. They’re fighting for the CAL title with North Reading.”

Peabody is searching for a state tournament berth. Wednesday’s loss to Beverly caught the Tanners off-guard, and their remaining stretch of games only gets tougher the rest of the way.

“I knew they’d come out strong in the game. They need one more to qualify (for the postseason) and they got it,” Peabody head coach Stan McKeen said of Beverly. “They were just pumped to play.”

The Panthers held an 18-5 advantage after the first quarter, but Peabody was able to cut its deficit to nine midway through the third. Beverly, however, ultimately pulled out the 56-49 victory.

“We just couldn’t get over the hump,” McKeen noted. “I think we exerted so much energy in the third that we didn’t have enough to carry us down the stretch.”

The Tanners will take part in next week’s Woburn Tournament, which also includes Chelmsford and Lynnfield.

Bounce Passes, a column on North Shore girls basketball, runs in The Salem News every Friday during the winter season. Contact Gianna Addario at GAddario@salemnews.com, 978-338-2615 and follow her on Twitter @GiannaAddarioSN.