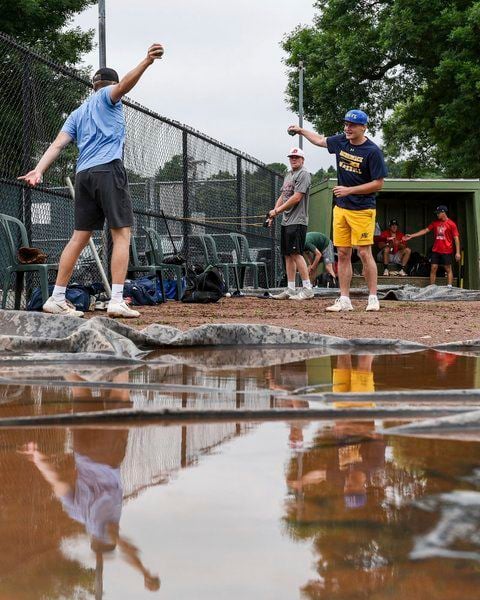 Players stretch out during the North Shore Navigators' media day at Fraser Field in Lynn amid the coronavirus pandemic. JAIME CAMPOS/Staff photo 6/30/2020 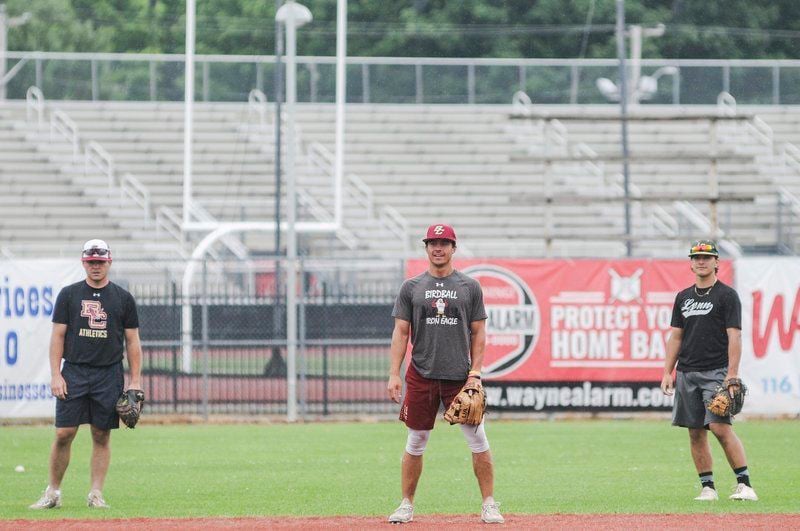 Infielders wait in a fielding drill during the North Shore Navigators' media day at Fraser Field in Lynn amid the coronavirus pandemic. JAIME CAMPOS/Staff photo 6/30/2020 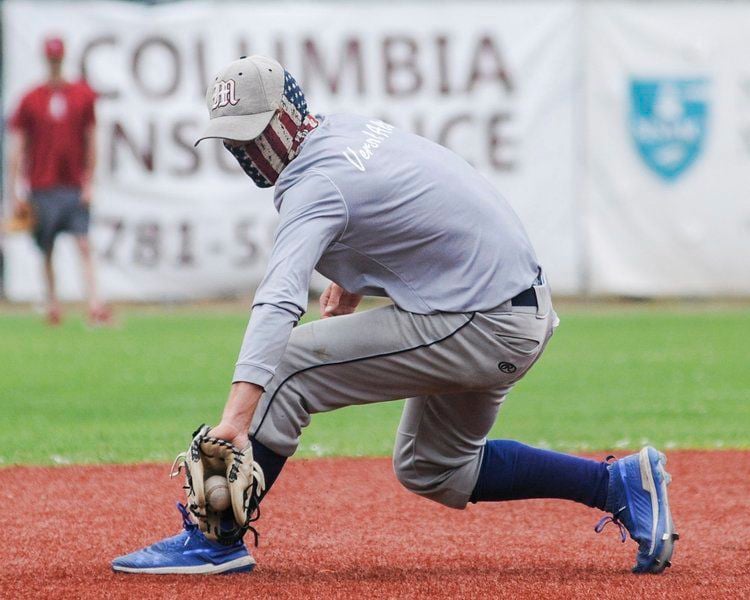 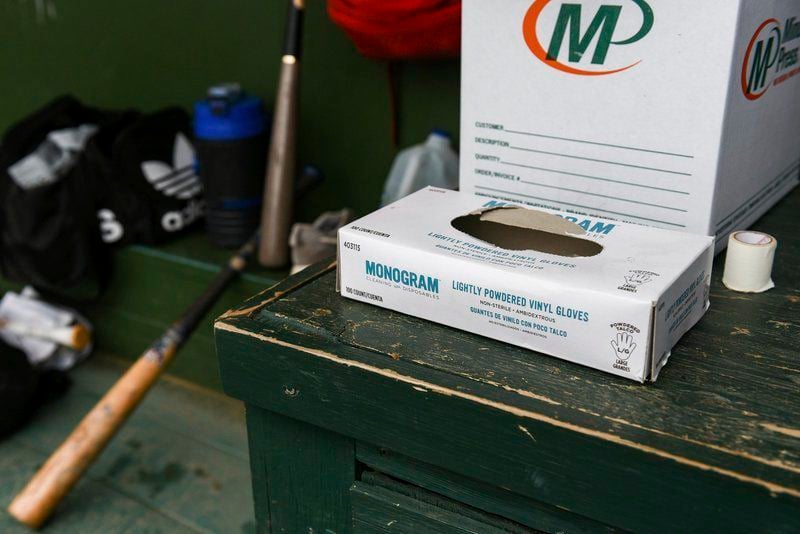 A box of disposable gloves is found in one of the dugouts during the North Shore Navigators' media day at Fraser Field in Lynn amid the coronavirus pandemic. JAIME CAMPOS/Staff photo 6/30/2020 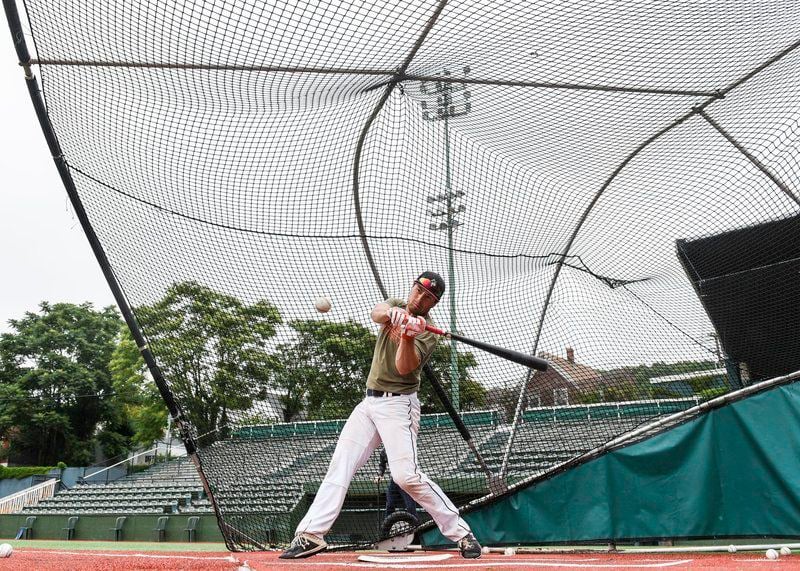 Outfielder Ryan Cervone takes a big cut of the ball in batting practice to prepare for the Futures League season. JAIME CAMPOS/Staff photo 6/30/2020 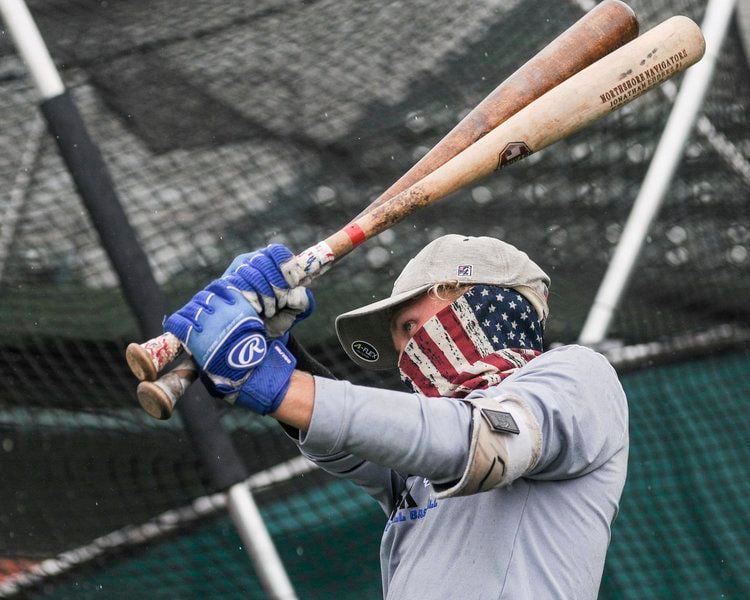 Players stretch out during the North Shore Navigators' media day at Fraser Field in Lynn amid the coronavirus pandemic. JAIME CAMPOS/Staff photo 6/30/2020

Infielders wait in a fielding drill during the North Shore Navigators' media day at Fraser Field in Lynn amid the coronavirus pandemic. JAIME CAMPOS/Staff photo 6/30/2020

A box of disposable gloves is found in one of the dugouts during the North Shore Navigators' media day at Fraser Field in Lynn amid the coronavirus pandemic. JAIME CAMPOS/Staff photo 6/30/2020

Outfielder Ryan Cervone takes a big cut of the ball in batting practice to prepare for the Futures League season. JAIME CAMPOS/Staff photo 6/30/2020

LYNN -- Luke Marshall lost the spring baseball season at Stonehill College to the coronavirus pandemic and like most college athletes in the country was afraid he'd lose the summer or even the fall as well.

New England's Futures Collegiate Baseball League held out hope that improving conditions in New England would allow for a summer baseball season. Marshall and his North Shore Navigator teammates were working out on the Fraser Field diamond Tuesday to prepare for Thursday's season opener with a spring in their step that screamed, 'pinch me, this is too good to be true.'

"I've been thinking all week, 'Wow, we have a game on Thursday.' It's a little surreal after four months," said Marshall, a pitcher from Swampscott. "Everyone's pretty excited. We have to consider ourselves lucky that we get to play."

The Navs will play 39 games in 49 days beginning Thursday in Nashua, New Hampshire. The first of 19 Fraser Field home games is next Tuesday (July 7) at 6 p.m. with the park set to be open at 25 percent capacity for fans (all ticketing will be done online at NSnavs.com).

Social distancing measures such as spread out rows in the stands, available hand sanitizer and one-way walking routes will be in place. The league and team will implement any measures the state requires when Phase 3 of reopening hits next week.

"We have a great safety plan approved by the city of Lynn and the league," said team president Derek January. "We really take into consideration the safety of the fans. People want the social distancing, they expect it, and the biggest positive is reducing the number of people to keep it spread out and safe."

On the field, not much will change. The Futures League, a wood bat college summer baseball showcase, will have players spread out over the dugout (and in some cases in the stands so they're safely apart) and more frequent changes of the ball itself; but generally the spread out nature of a baseball game shouldn't be a big risk.

"It's going to be baseball as usual for the Futures League. There's some extra precautions for players, coaches and umpire. We've cut down on the on-field promotions and entertainment to keep things distant," January said.

North Shore opens the season with 34 players on its roster with the vast majority coming from the New England area. Reigning league MVP Sean Lawlor from Florida has returned along with last year's saves leader Beau Dana of Marblehead. While there was some turnover with out-of-state players the Navs signed last winter having to remain home due to the pandemic, the addition of locally based standouts like Harvard's Logan Bravo, Boston College's Peter Burns and Sal Frelick and Northeastern's Ben Malgeri has the Navs aiming for the playoffs (which begin August 20).

"The talent here is off the charts," said January, who tapped Bob Macaluso to take over as manager. The Navs have been working out together for a few weeks as they play their way back into baseball shape after the long layoff.

"The talent level is pretty insane. We scrimmaged last week and everyone looked really well for not having played for four months," said pitcher Gavin Sullivan, a junior at Stetson University from Swampscott. "At first I thought I wouldn't be able to play until the fall or maybe next spring, so to be starting up again out here is pretty exciting."

Most of the players did what they could to stay in shape during the stricter social distancing before Massachusetts began to reopen, whether it was solo drills or throwing with family members. The team's 20 pitchers, including locals like Marshall, Dana, Cedric Gillette (Andover), Nick Reiser (Swampscott), Cam Seguin (Austin Prep), Jack Wallace (Winthrop), Todd Tringale (Saugus) and Nate Espelin (Belmont), figure to be on low pitch counts as they build strength. Hitters, meanwhile, are working on their timing and stamina.

"We're getting into the swing of things," said Marshall. "It's so nice to be on the field with teammates again."

For most of the Navs players, the last few months have been the longest they've gone without playing a baseball game since they were in elementary school. With the Futures League presenting a chance to return, and play safely, they're thrilled.

"Nobody's more happy to play than the kids. They got shorted more than anybody losing the spring. These guys are programmed to play," said January.

"We didn't expect to be the only ones playing but we hung on so long because we were hoping things would get better. The Governor's done a really good job of taking it slow and I think that's why we're eligible to play now."