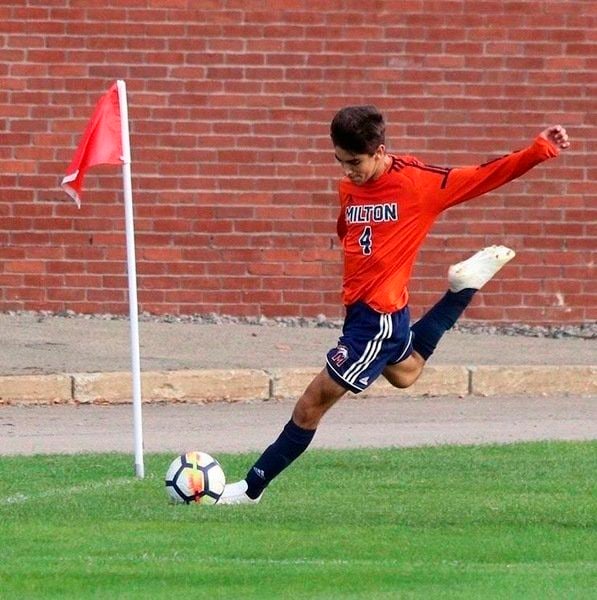 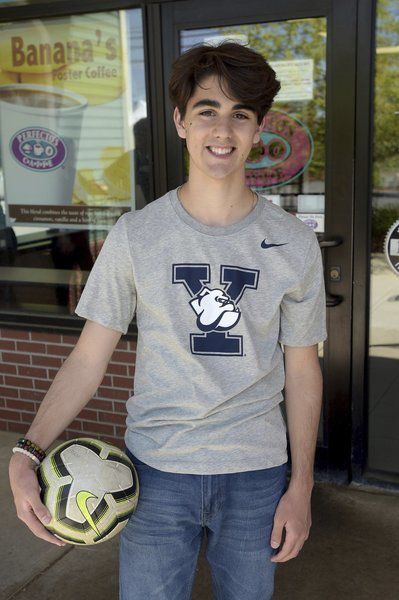 TIM JEAN/Staff photo Aydin Jay, has been accepted at Yale University to play soccer. The junior, who grew up in North Andover and now lives in Boxford with his parents and two sisters, is entering his senior year at Milton Academy. 6/17/20 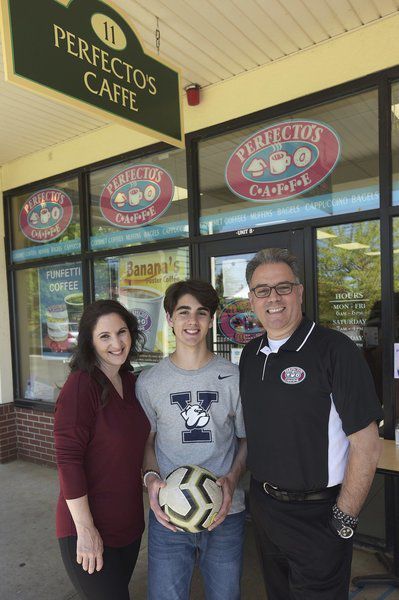 TIM JEAN/Staff photo Perfecto's Caffe owners, Phil and Joanne Jay with there son Aydin Jay, who has been accepted at Yale University to play soccer. The junior, who grew up in North Andover and now lives in Boxford with his parents and two sisters, is entering his senior year at Milton Academy. 6/17/20

TIM JEAN/Staff photo Aydin Jay, has been accepted at Yale University to play soccer. The junior, who grew up in North Andover and now lives in Boxford with his parents and two sisters, is entering his senior year at Milton Academy. 6/17/20

TIM JEAN/Staff photo Perfecto's Caffe owners, Phil and Joanne Jay with there son Aydin Jay, who has been accepted at Yale University to play soccer. The junior, who grew up in North Andover and now lives in Boxford with his parents and two sisters, is entering his senior year at Milton Academy. 6/17/20

North Shore talent Aydin Jay knew at a young age that if he was going to play soccer at the next level he wanted to make sure there was a perfect balance between academics and the sport he loved.

He kept that promise to himself when he began attending Milton Academy three years ago, and he'll continue on the path towards futbol and academic excellence when he officially enrolls at Yale University in 2021 and joins the men's soccer team.

Jay, 17 and a rising-senior at Milton, recently committed to the New Haven-based Ivy League power after continuously showcasing his skills at both the high school and club levels. Soon, he'll once again get the opportunity to test his intellectual and athletic mettle on the brightest of stages.

"I knew from the get-go that I wanted to go to a school that had that balance between soccer and academics, a high level in both," said Jay. "I was looking into other Ivys as well as some Big East schools like Georgetown and UConn, but I just fell in love with Yale. The coaching staff was great, the bond on the team was great ... it was just somewhere I felt I could impact the community as well as the team and that's really something that went into my decision."

While growing up in North Andover, Jay initially latched onto soccer at age three. He honed in on the fundamentals from there before he and his family moved to Boxford, where they remain today, when he was eight.

Prior to attending Milton as a freshman, Jay shined for both the North Shore United soccer club and Masconomet middle school. His unique knack for the game and overall successes on the pitch soon earned him a spot on the New England Revolution Academy squad, which is when his Division 1 trajectory really took off.

"I played (for New England Revolution Academy) for two years and that's when I really figured out that I was interested in getting a good education and playing high level soccer," said Jay. "We traveled a lot, and being 12, 13, 14 years old, it was just a great experience to get out there and play teams from all over the East Coast and the entire country. I wanted to go to the Revs (Revolution Academy) to play against kids that I wouldn't necessarily get to play against on a more localized club."

Moving up the ladder, Jay took his Revolution Academy experiences and applied them to his new team at Milton. He immediately saw varsity time as a freshman, and despite playing against kids who were much bigger and stronger than him, Jay made an impact. The team improved each year with him in the lineup, and he helped them reach the New England Prep School Athletic Council's (NEPSAC) Class A Championship this past season where they fell in a shootout to Worcester Academy.

During the offseason, Jay continued to work diligently on his craft as a member of the GPS Massachusetts (freshman and sophomore year) and Seacoast United (current). He made his presence felt in the classroom as well, challenging himself with high level courses and passing with flying colors.

There's no question Jay is already prepared to embark on his new journey, one expectantly based on premier soccer and scholarly studies. But he'll gladly take one last farewell season on the turf with his high school teammates, hoping to propel them over the hump to a NEPSAC title.

"Jay's a hard-working kid dedicated to academic and athletic goals and he's always been a technically skilled and smart player," said Milton Academy soccer coach Chris Kane. "Every year he added something to his game and in the last 12 months he became a more complete defensive player as well."

While Jay certainly gained an abundance of experience during his time on the club soccer circuit, nothing can quite compare to what he's walking into at Yale. The prestigious university boasts a diverse student body, and the soccer team is no different. The current Bulldogs roster not only consists of players from all throughout the U.S., but across the pond as well from countries such as Germany, Brazil and Spain.

"Coming from Massachusetts and even at Milton there was always some type of international component but nothing like Yale; so I'm really excited," said Jay. "I'll be a teenager coming into a school with kids from South America, North America, Europe ... the bond is just stronger in that sense because of the cultures and different personalities so I'm really looking forward to that aspect of it."

Jay, whose parents own Perfecto's Caffe in North Andover, plans to enter a field of study in economics or finance and "would love for this field to be a possible route of his coming out of Yale."