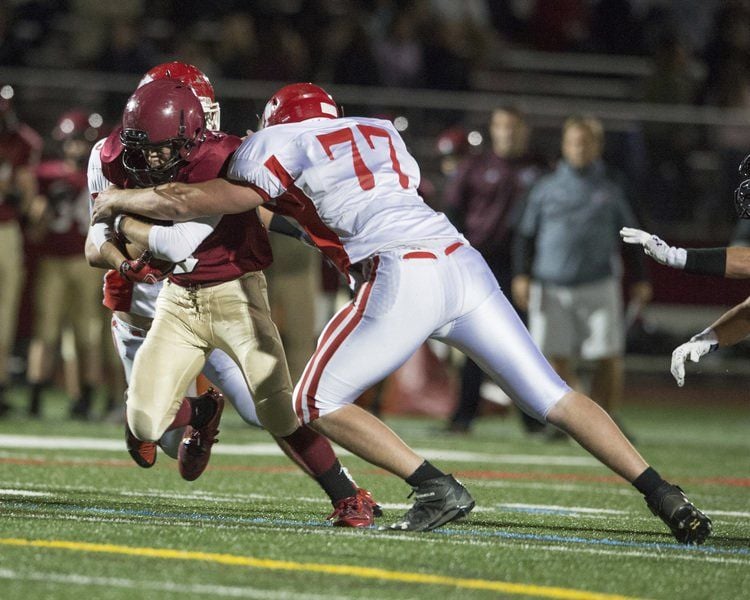 DESI SMITH/Staff photo.  Standout two-way lineman Jack Butt of Masconomet (77) not only has a penchant for bringing down opposing ballcarriers, but also has a half-dozen sacks this season heading into Thanksgiving morning's showdown with rival North Andover. 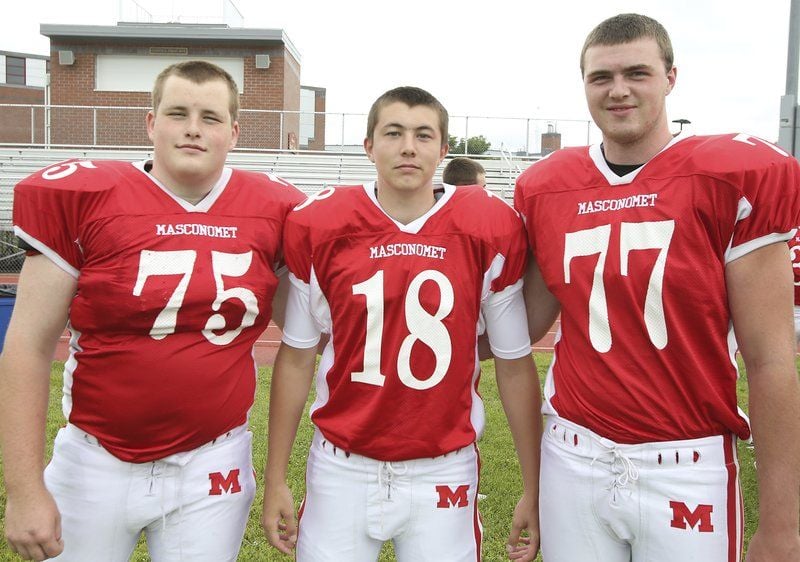 DESI SMITH/Staff photo.  Standout two-way lineman Jack Butt of Masconomet (77) not only has a penchant for bringing down opposing ballcarriers, but also has a half-dozen sacks this season heading into Thanksgiving morning's showdown with rival North Andover.

This year's Thanksgiving Day football rivalry between Masconomet Regional and the Scarlet Knights of North Andover will take on special meaning, since it's the last time these two are scheduled to meet on the holiday.

The Scarlet Knights, who won the Division 2 North playoffs and will take on Marshfield in the state semifinals this weekend, announced earlier this fall that they'll face neighboring Andover High starting next Thanksgiving. So the Chieftains of Masconomet would love nothing better than to end their 40-year holiday rivalry with a big win.

Senior two-way starting lineman Jack Butt wants to make sure his team leaves nothing on the field next Thursday morning at Walsh Stadium at North Andover.

"It's the last game for all the seniors and also the final game between these two teams," said the 6-foot-5, 235-pound Butt, who has started in the trenches for the Chieftains the last two seasons. "That means it's the last chance we have to beat them. So Thanksgiving would be great if we could finish with a 'W' before all our seniors head off to college."

Butt, who intends to play ball in college and has the University of Rhode Island at the top of his list, is Masconomet's left defensive end and offensive left tackle. He has helped lead his team to an 8-2 record heading into the holiday, which included eight straight victories and the No. 1 seed in the Division 3 North playoffs before losing to Tewksbury in the sectional final.

"I like defense a little better," he said. "We know we can't afford to turn the ball over on offense, but we would love to come up with lots on defense. Our last game (the aforementioned 28-0 loss to Tewksbury) was depressing, but we know we still have North Andover to go. We want to end it the right way."

Butt had three quarterback sacks in one game against Pentucket while making seven tackles. He'll come into Thanksgiving with six sacks this fall and admits he loves to nail the quarterback.

"It's fun getting to him for a big loss," said Butt, who works out four days a week in the offseason and is also into boxing. He is thinking about playing rugby in college because he loves physical sports. "When you get a sack, the fans go crazy and it gives your team momentum."

Veteran Masconomet head coach Jim Pugh would love to see Butt get to the quarterback a few times against North Andover. He said a lot of colleges are interested in his talented lineman because of his size and potential.

"Jack has had a great year; I have to give him a lot of credit for working so hard in the weight room. He has been a dominant force for us this year with the sacks," said Pugh. "We run behind him, and he's a big reason why Gavin Monagle is over 1,000 yards rushing (1,164 yards and 11 TDs) and Scotty Foden is right around there (needing 54 yards rushing on Thanksgiving)."

Pugh admitted it's unfortunate that this year marks the end of their holiday rivalry with the Knights, which began in 1975. North Andover holds a 25-13-1 all-time series advantage, but Masconomet has won three straight in the series, not to mention six of the last seven and nine of the last dozen games played.

"It's too bad its the end of our Thanksgiving rivalry, because it's been a good run. (North Andover) was dominant early on, but we've had a lot of success recently. Things change, and that's the way it goes. It's not North Andover's fault, but it's going to be an emotional day for all our players because it was a nice rivalry. We have a lot of respect for their coaches, and both players on both sides respect each other."