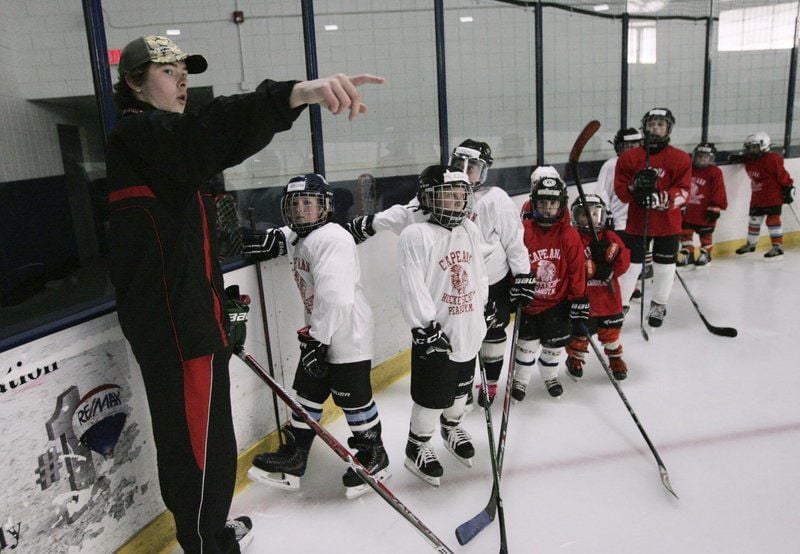 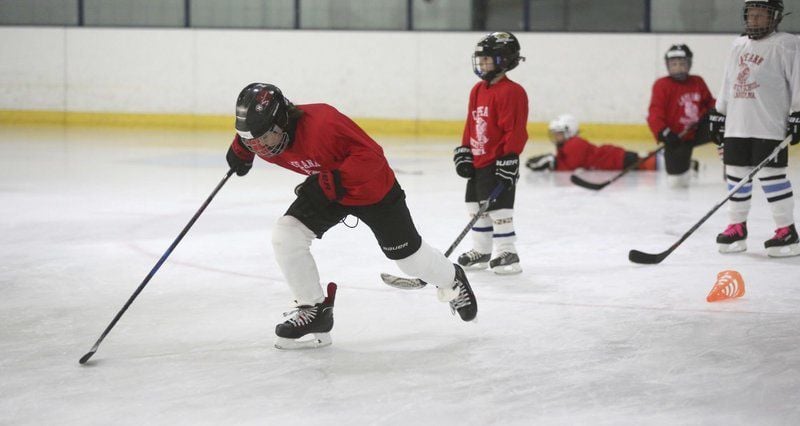 Ken Yuszkus/Staff photosHogan Sedky, 11, takes off skating full speed down rink during drills at practice at the Cape Ann Hockey School held at the McVann-O’Keefe Rink. 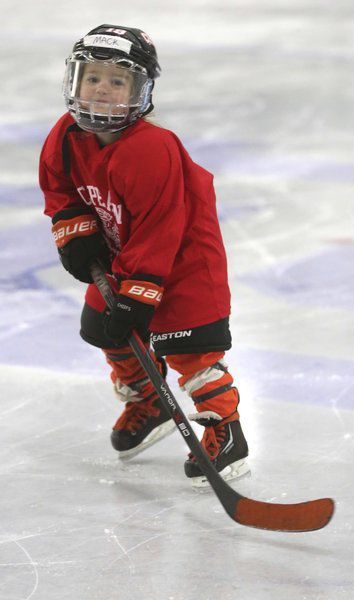 MacKenzie Lecolst, 4, takes part in the practice at the Cape Ann Hockey School held at the McVann-O’Keefe Rink. 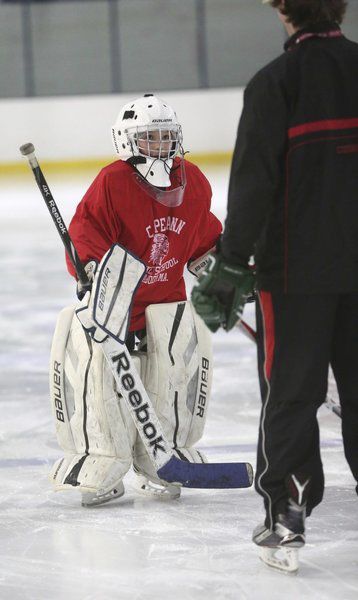 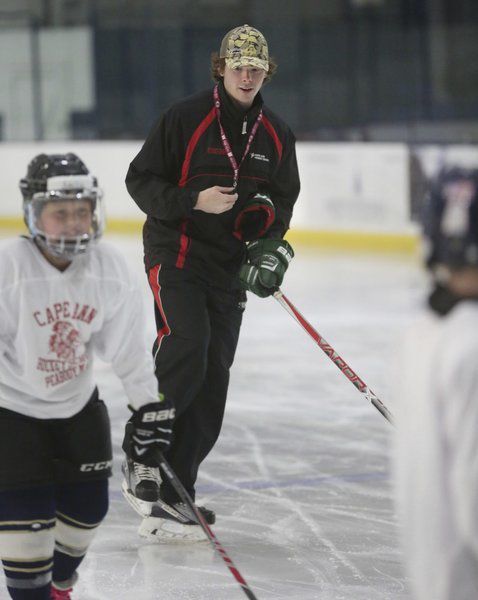 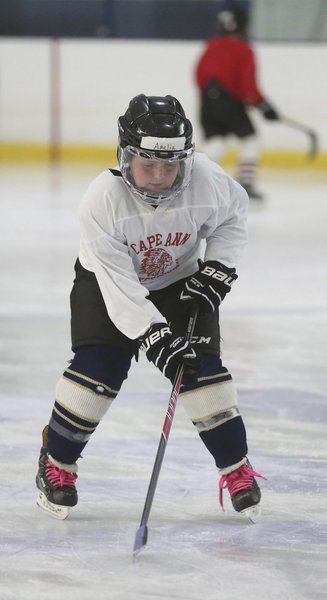 Amelia Spencer, 10, during practice at the Cape Ann Hockey School held at the McVann-O’Keefe Rink.

Ken Yuszkus/Staff photosHogan Sedky, 11, takes off skating full speed down rink during drills at practice at the Cape Ann Hockey School held at the McVann-O’Keefe Rink.

MacKenzie Lecolst, 4, takes part in the practice at the Cape Ann Hockey School held at the McVann-O’Keefe Rink.

Amelia Spencer, 10, during practice at the Cape Ann Hockey School held at the McVann-O’Keefe Rink.

It’s the dog days of summer, but at the McVann-O’Keefe Rink in Peabody the Cape Ann Hockey School is going strong, teaching youngsters the skills needed to become better hockey players.

Its founder Bob Driscoll died suddenly 15 months ago doing what he loved best, playing hockey. His widow, Sally Driscoll, and nephew, Dan Driscoll, are carrying on the tradition and his legacy as directors.

“It’s awful hard to run it without Bob, but he laid a great foundation,” said Dan Driscoll, who is the athletic director and hockey coach at the Berkshire School. He has been there for 12 years after spending five at Winchendon and five more at Pomfret. A graduate of UConn, he played professionally in Europe.

Hockey has been good to the Driscoll family, and the school is in its 38th year. Dan wants to give back to the sport and help his family.

He returns to the North Shore from his home in Sheffield, and brings sons Mark and Dan along to help instruct the kids. The school runs for the first three weeks in August with the youngest players on the ice for two hours each morning, followed by Bantams and high school in the afternoon, and a very competitive 11 team summer league that runs week nights and on Saturday afternoons.

There will be playoffs and a champion crowned at the end. Last year, St. Mary’s won and was given a trophy in honor of Bob Driscoll that is on display in the rink. Local teams in the high school league include Peabody, Bishop Fenwick, Beverly, Masconomet, St. John’s Prep and Swampscott along with Revere, St. Mary’s, Malden Catholic, Methuen and the Lynn Jets.

Sally Driscoll is on hand all the time, working the concession stand and making sure everything runs smoothly. Her husband was the beloved head coach at Masconomet for 33 years. Sally isn’t sure how she made it through last summer’s hockey school without him at her side.

She has been there from the start and recalls one year giving birth to one of her 10 children on a Friday, and being at Cape Ann Hockey School the following Monday morning heading out the shirts.

“I think I was in shock the whole time a year ago, but there was never a thought not to continue it,” said Sally Driscoll. “Those first few days were very hard; lots of memories for me. I was lucky to find my soul mate and losing him is hard.

“This hockey school has always been a family affair. Bob walked into the rink and his eyes would light up. He just loved it, and the kids loved him; I used to call him the Lilliputian king (from Gulliver’s Travels).”

Dan Driscoll said he learned a lot from his uncle, Bob, his father, Dan, who was director of special education in Lynn for many years, and uncle, John, who was the AD and football coach at Northeast Regional and now in the Massachusetts High School Football Hall of Fame.

“They taught me what I know about the game and coaching,” said Driscoll, who has been coaching hockey for 22 years, won three New England championships and has been named Coach of the Year four times.

“Some great players have come through this hockey school over the years and it’s fun to see them go on to do well in high school, college, and even in the pros.

“I coached Kevan Miller of the Bruins, Brian Flynn of the Canadians, Sean and David Driscoll, the LeBlanc brothers from Beverly, Andy and Greg LeColst from Masco, the Koopmans from Marblehead, and Jake Kulevich, who signed with Manitoba in the AHL. They all got their start right here.”

Ahead of his time

Bob Driscoll had worked at other hockey schools before founding his own, and knew he wanted to teach kids all the skills while making it fun. He and his staff stressed positive motivation and patience while practicing edge control, skating drills, team play, agility, stick handling, decision making, passing, shooting and individual goaltending instruction. Sportsmanship was always at the top of the list.

“He was an innovator; way ahead of his time,” Dan said about his uncle. “USA hockey has changed is approach today stressing a whole new role model, especially with younger kids to keep them involved by touching the puck a lot. Bob was doing that from the beginning. We keep the student-instructor ratio low, and stress having fun. That’s the philosophy the school was founded on and he did such a great job it’s easy for us to carry on.

“We want to keep Bob’s spirit alive and this is a great way to honor him. Sally is the brains behind the operation; we couldn’t do it without her.”

For the past 10 years there has been a session for girls ages 9-17. This summer it takes place the last week of the school on August 14-18. Because of the increasing popularity of girls hockey Sally Driscoll wants to add a girls league.

“We hope we can start it next year,” she said. “Our numbers are down a little this summer from what they have been in the past. I think the reason why is that kids are so over-programmed now.

“I’m at the rink every day, all day and Iove it. This is like old home week with the fathers we had years ago now sending their sons.”