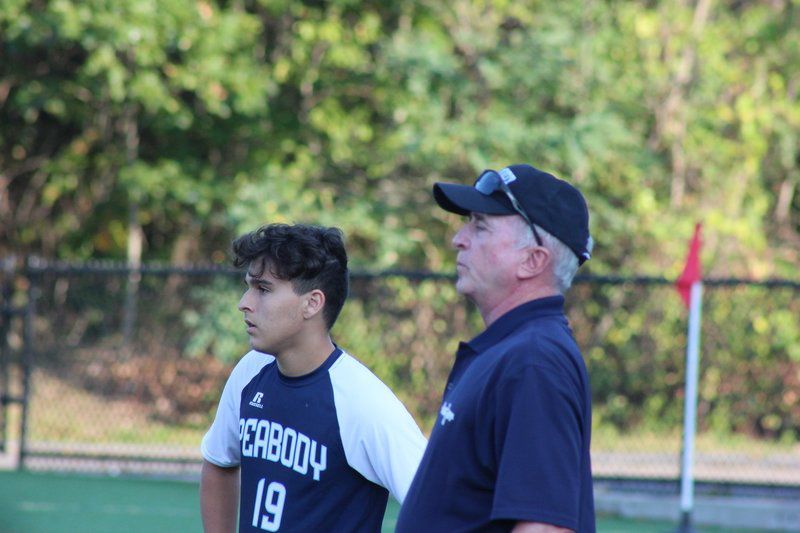 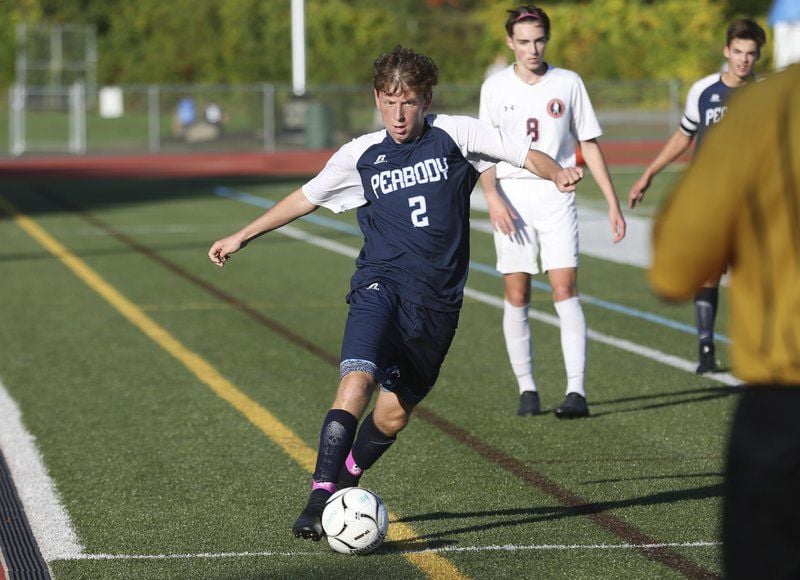 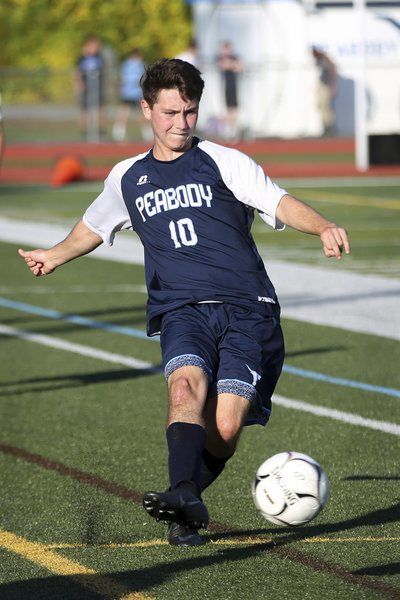 In recognition of the milestone, JV coach Stephen Fall and the players surprised McKeen with a custom made Peabody soccer zip-up athletic jacket with a special “250” emblem printed on the back.

If it was up to him, the humble McKeen would just give all the credit to his players and chalk up the accomplishment to his lengthy tenure in Tannertown. But in reality, it’s his system and guidance that’s allowed the boys soccer program to be successful for so many years — and 250 wins at any level is no easy feat.

“It just means I’ve been here a long time,” joked McKeen. “But really, I don’t think about it, I’ve never thought about it over the years. I think when I got to 200 wins back in 2014 when Ben Manoogian was captain, that year I thought to myself, ‘200, that’s huge’. But I never really thought beyond that and here we are, five years later at 250.

“I enjoy doing what I do or I wouldn’t be here for this long,” he added. “I’ve been very fortunate to have good kids in the program over the years; manageable kids that you know will listen.”

It would be one thing if McKeen’s milestone triumph came in a meaningless late season road clash during a losing campaign. But reaching that point on his familiar home turf as the Tanners improved to 8-3 on the year made it that much sweeter.

The million dollar question is: how has a Tanners team that graduated the likes of Johnny Alves (27 goals, 9 assists last year), Mike Tansey and Noah Surman been able to pick up where it left off? According to McKeen, only a handful of players went into the season with varsity experience, and just two had played significant minutes.

But thanks to some strong leadership from captains Ben Kemp, Jake Howard and Kyle Morfis, as well as some stellar play from the underclassmen, Peabody is once again in prime position for a trip to the Division 1 North state tournament.

“After the first few games I didn’t expect us to be where we are now, but then we started to come together as one and play as a team,” admitted Morfis, who has contributed two goals and five assists on the season.

“I think with this team, we knew we would have a little bit of a slow start since all of us hadn’t really played together too much,” added Howard. “But as the season went on I think we all knew we’d be a better team — and that’s shown lately. It’s just all coming together.”

The Tanners aren’t as big or physically imposing as they were a season ago, but they’re arguably more tactically skilled and balanced. There’s no more dishing it to Alves and letting him go to work; instead, they’re moving the ball with flow and playing unselfish team soccer.

“The addition of Victor Maciel in the midfield has been really huge for us,” said Kemp. “He’s a fantastic player; by his senior year I think he’ll be one of the best players in the NEC.”

“Kyle Joyce has been playing really well lately, putting some big goals in,” added Morfis. “He had the tying goal against Billerica, which was a huge win for us. And it was a nice goal, he made a nice move around the defender and finished it off.”

It’s been a collective effort for the streaking Tanners, who hope to make it five wins in a row when they travel to Marblehead on Thursday.

“Varsity, it’s a different ballgame no question about it. I figured it was going to take us some time to get us in position to make the tournament, but through 11 games they’ve really done a pretty good job,” said McKeen. “I think the Billerica game last week was kind of the turning point and put us over the hump. Hopefully, we can keep it going.”

The third annual GIFT Cup game will be played this Thursday in Ipswich between the Tigers and Georgetown boys soccer teams. Standing for Georgetown/Ipswich Fundraising Tournament, this year’s event will be collecting donations for local food pantries and for the Dinner Bell in Ipswich. Kickoff for the game is scheduled for 3:45 on the turf at Ipswich High.

Don’t look now, but the Salem High boys squad has strung together their first winning streak of the season in impressive fashion. First-year head coach Steve Harris and his squad topped Swampscott, 3-2, last Friday before beating a 5-2-2 Gloucester squad, 4-3, Monday afternoon. A game before that, they nearly upset Peabody before falling late in action.

Endi Doku has been on an absolute tear of late, scoring seven goals over the past six games — including two against Peabody and two against Swampscott.

It may just be two games and the Witches still sit at just 3-8, but it’s obvious they’ve been playing much better soccer of late. And who knows? Maybe a playoff push looms.

And then there were two. Previously unbeaten St. John’s Prep was shut out by an impressive Needham team last week, leaving us with just two undefeated high school soccer teams in The Salem News coverage area, both on the girls’ side: Beverly at 11-0 and Pingree at 9-0-1. St. John’s has since rebounded with sound wins over Everett and Catholic Memorial, pushing their record to 10-1-1.

Corner Kicks is a weekly high school soccer column that appears in The Salem News every Wednesday during the fall season. Contact staff writer Nick Giannino at Ngiannino@Salemnews.com or by phone at 978-338-2648, and follow him on Twitter @NickGiannino_SN.