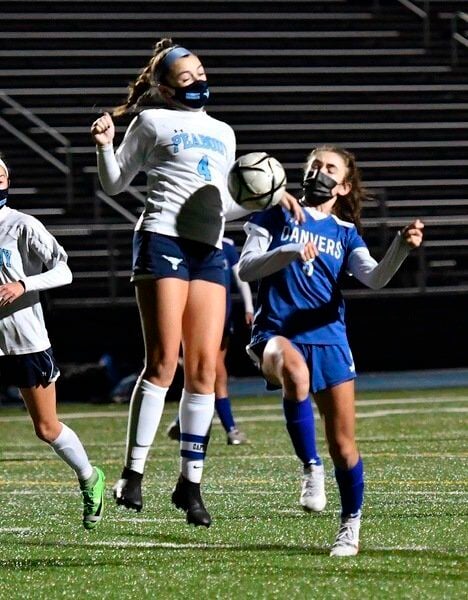 Peabody's Aja Alimonti wins a loose ball and tries to keep it away from Danvers' Arianna Bezanson. Rose Raymond photo 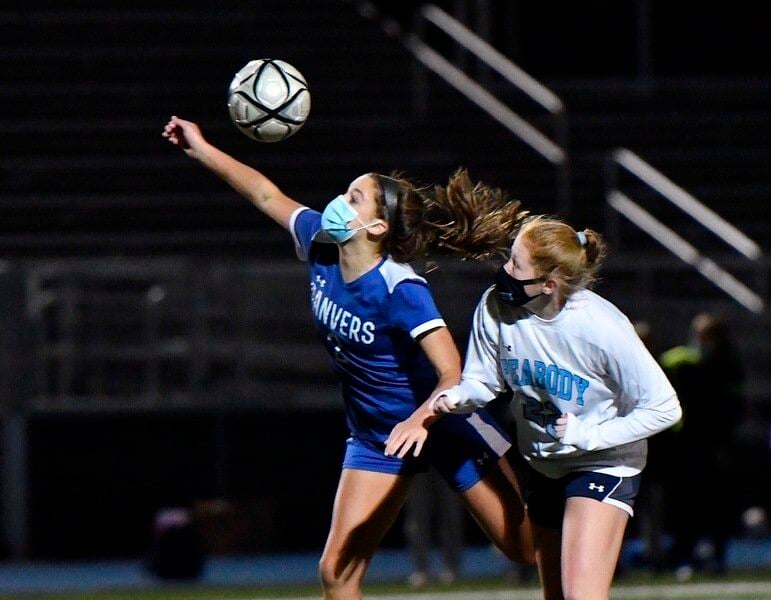 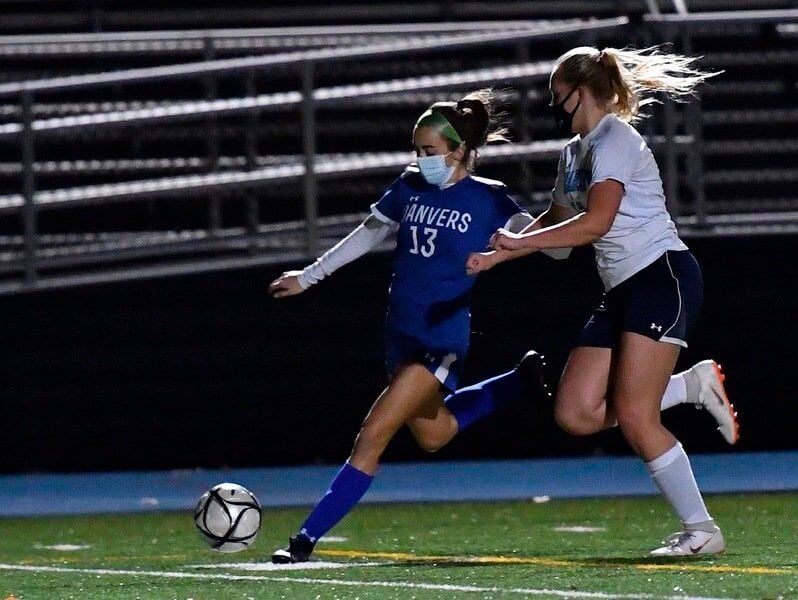 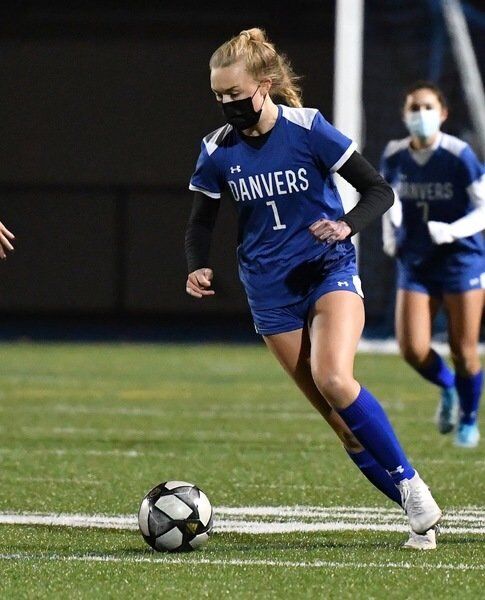 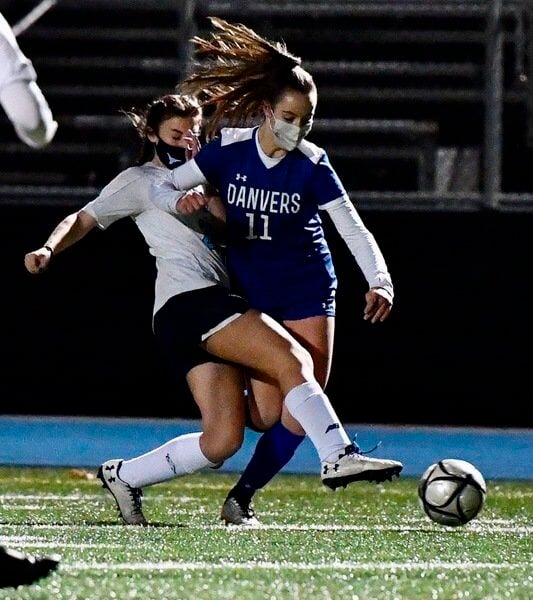 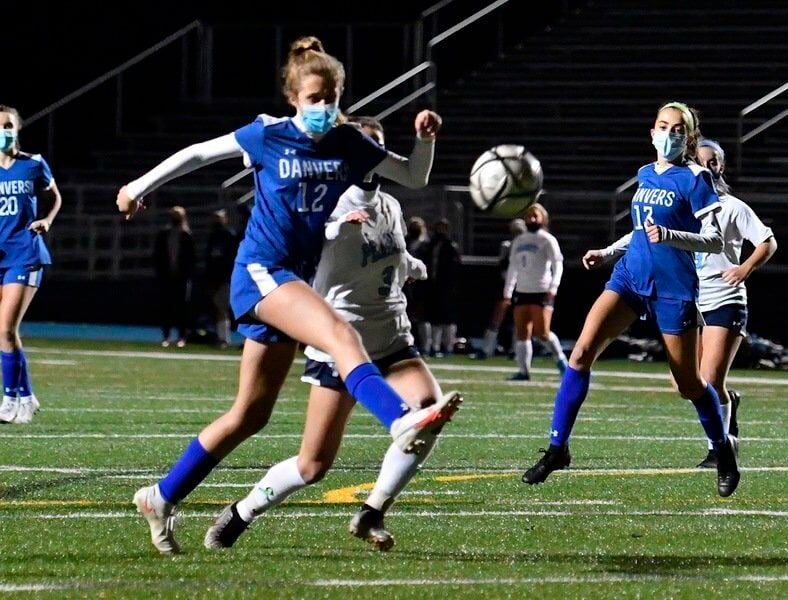 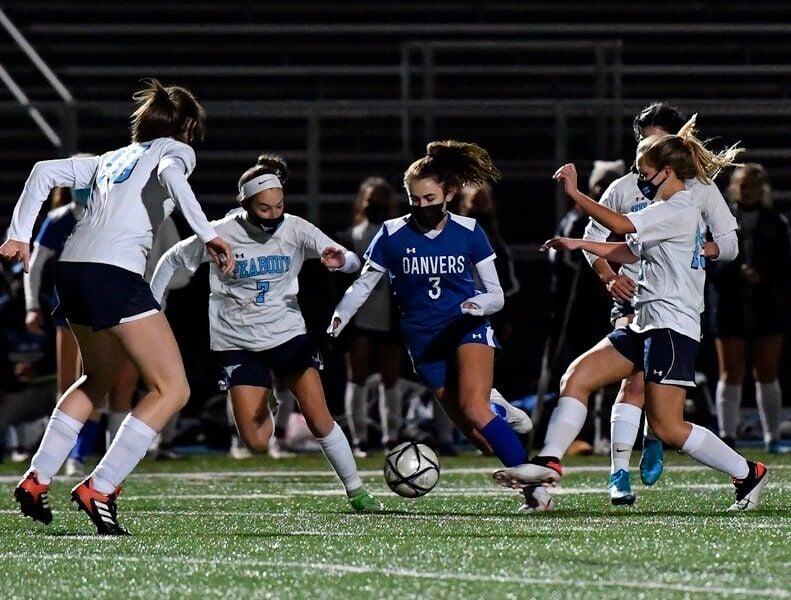 Hailey Baker (7) and the rest of the Peabody defense try to converge on Danvers' Arianna Bezanson. Rose Raymond photo 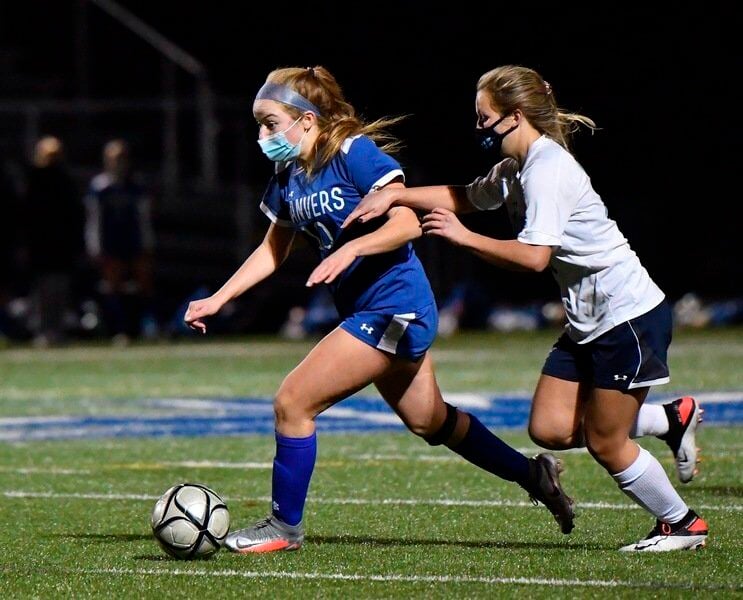 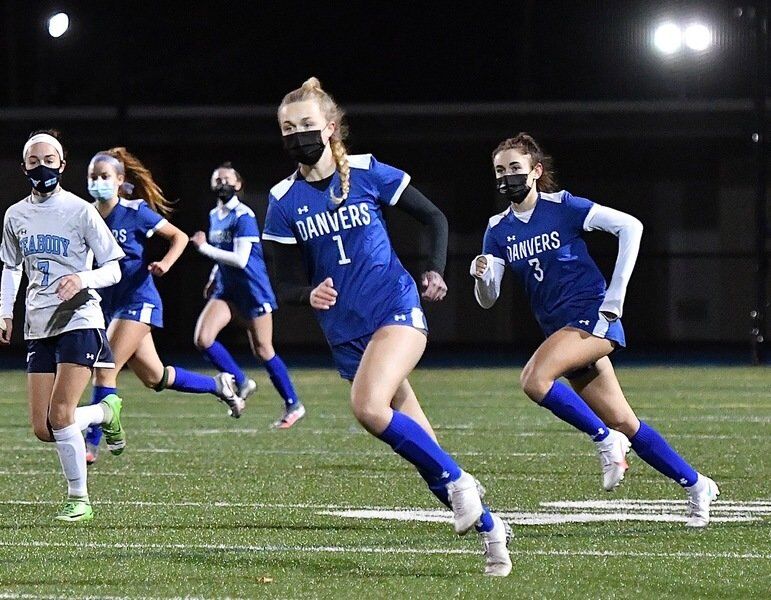 Peabody's Aja Alimonti wins a loose ball and tries to keep it away from Danvers' Arianna Bezanson. Rose Raymond photo

Hailey Baker (7) and the rest of the Peabody defense try to converge on Danvers' Arianna Bezanson. Rose Raymond photo

DANVERS — Only one Danvers High girls soccer team in modern history had ever won its final game of the year — but now there are two.

The Falcons put the finishing touches on a perfect 2020 season by topping rival Peabody, 3-1, on a chilly Tuesday night under the lights at Dr. Deering Stadium.

By going 11-0 in this pandemic shortened year, Danvers became the fourth team in program history to get through the regular season with no losses and the first since 1998 to do so both undefeated and untied.

"When people talk about Danvers girls soccer, they talk about the team that lost in the state finals in overtime (2003), the team that won it all (2017) and now there's going to be a third team," said longtime Falcons head coach Jimmy Hinchion. "They ran the table. They got the most they could possibly get out of this season."

Outscoring its opponents 48-5, Danvers is the first team to finish the Northeastern Conference slate with no losses or ties since Peabody in 2012. The Falcons trailed in only one game all year (against Swampscott) and allowed goals to only two clubs (Swampscott and Peabody). All that dominance came after starting practice two weeks later than the rest of the league, another hurdle they cleared seemingly with ease.

"It's amazing. Honestly this team's been together forever. I knew everyone says that, but with how many obstacles we faced we needed that togetherness," said senior Julia Vaillancourt, whose gorgeous top corner boot in the second quarter stood up as the game-winner Tuesday. "We couldn't have asked for a better outcome. It felt so good just to be together on the field one last time."

The Tanners (3-6) brought a physical defensive game reminiscent of so many pre-COVID battles between these sides. Hailey Baker did a remarkable job marking Danvers' uber-dangerous scoring machine, Arianna Bezanson, and Aja Alimonti and Katherine Scacchi each had phenomenal outings at center back. Danvers still did its damage, but it was a much better showing than Peabody's 6-1 loss on this field a few weeks ago.

"A thousand times better," said Tanner head coach Dennis Desroches. "Baker was outstanding considering all the havoc Ari can cause. She had six points last time, so to hold her to one is really good; a three-goal swing from last time in our favor shows our progress, shows these girls are getting better. You can't take anything away from Danvers. They're a fantastic team."

Bezanson opened the scoring in the fifth minute of play, allowing Danvers to get comfortable. Vaillancourt's marker ("One of the prettiest goals of the year," Hinchion said), assisted by Reese Pszenny, made it 2-0 at the 36-minute mark.

"I saw the corner of the goal open and I was like, 'I have to shoot,'" said Vaillancourt, tied for second on the team in assists. "I'm not usually comfortable with that, but the way it looked I just knew I had to shoot."

Senior captain Riley DiGilio produced a juggling finish at the 44-minute mark off a great ball from Hailey Murphy to make it 3-1. The Tanners answered with McKayla Fisher's team-leading fourth goal less than a minute later, but couldn't put another one by the air-tight Danvers defense.

The Falcons held a 20-5 edge in shots on goal and Peabody's sophomore keeper Emma Bloom had an excellent showing with several acrobatic saves.

"Emma was outstanding," said Desroches. "She has great hands and doesn't give up any rebounds."

Senior captain Livvi Anderson, senior Avery Scharffenberg, Gabby Chisholm, Emma Dunn and Mikayla Shaffaval were tremendous in the back for Danvers, with Mia Jordan enjoying a great outing in the midfield. Keeper Holly DeAngelis made the stops when they were tested.

Though there was no state title and no official NEC crown, Danvers found a way to make some history by becoming the 14th North Shore girls soccer squad to get through a regular season undefeated in the last 25 years.

"It's a special group and these seniors have been special since the day they came into high school," Hinchion said. "They played fantastic soccer. A perfect season? That's something to remember."