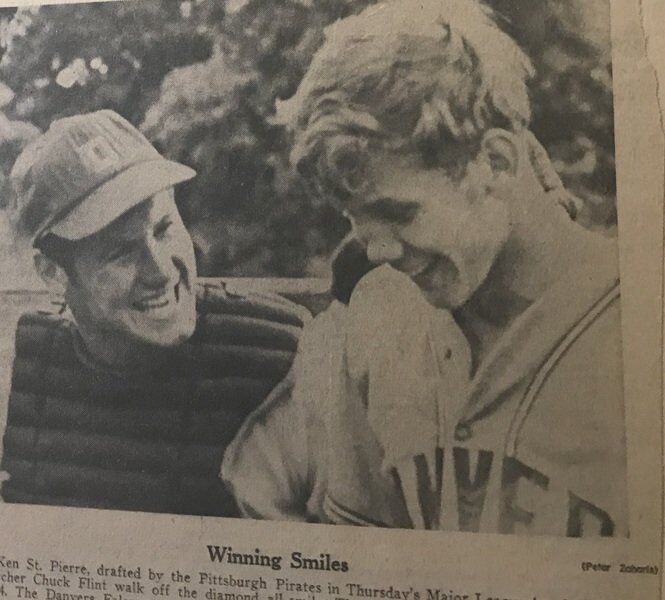 There were a lot of smiles to go around for the 1970 Danvers High Class B state championship baseball team, as shown here by catcher Ken St. Pierre (left) and hurler Chuck Flint. 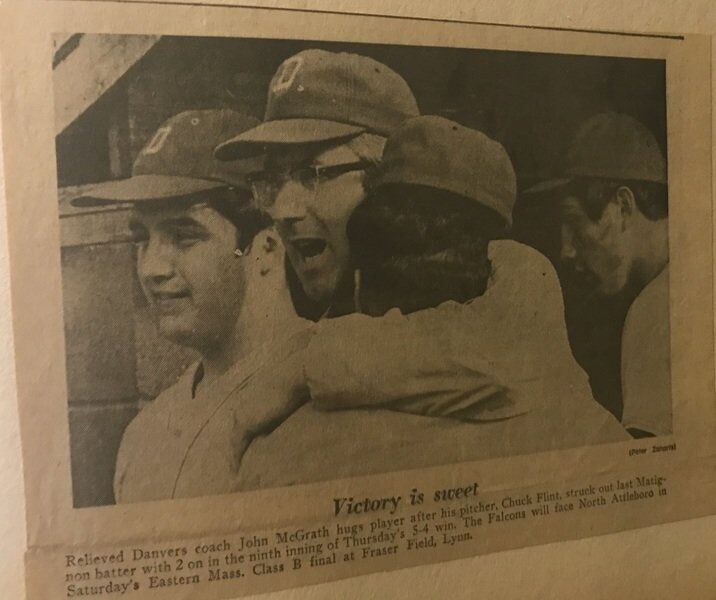 Legendary Danvers High baseball coach John McGrath gives junior Chuck Flint a hug in this 1970 Salem News photo after Flint sent the Falcons into the Class B final that season. 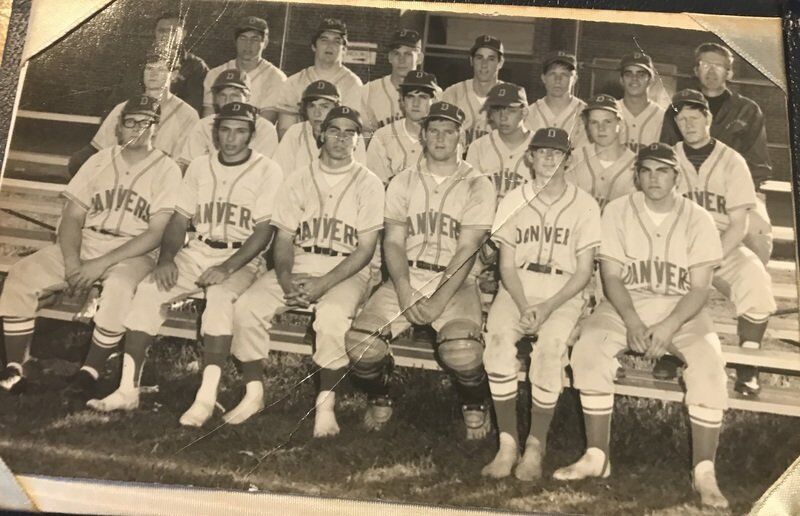 There were a lot of smiles to go around for the 1970 Danvers High Class B state championship baseball team, as shown here by catcher Ken St. Pierre (left) and hurler Chuck Flint.

Legendary Danvers High baseball coach John McGrath gives junior Chuck Flint a hug in this 1970 Salem News photo after Flint sent the Falcons into the Class B final that season.

Those who have followed Danvers baseball for 60 years-plus — yes, there are several of us graybeards still around — continuously have to correct our younger brethren.

Those youngbloods declare proudly, though inaccurately, that Danvers became a great baseball town during the Belichickian-like 31-year tenure of head coach Roger Day. Under his leadership from 1987-2017, the Falcons had 506 wins against just 200 losses, won 5 Division 2 North titles and a Division 2 state championship in 2001.

In reality, though, Danvers became a great baseball town long before that. In the 1960s and 1970, to be precise, when that 11-year stretch produced two state Little League champions (the Danvers Nationals in 1965, the Danvers Americans in 1969) and the high school’s first state champion (Class B) in 1970.

So yes, it's been exactly 50 years since Danvers High's first state championship baseball team, led by head coach John McGrath. The Blue-and-White routed North Attleboro, 14-5, in that Class B title clash at Fraser Field in Lynn.

The Salem News invited McGrath and three of his players, Munzing, Madden and Del Pike, all members of Danvers baseball royalty families, to share memories of a half century ago when they became state champions.

“This group of players had great confidence in themselves,” recalled McGrath, now 87 and the best two-major-sport coach Danvers High has ever had. He coached baseball and basketball from 1964-80, winning three Northeastern Conference titles in each sport, plus the baseball state title. He also had four NEC runner-up teams in each sport.

“That 1970 team was amazingly talented as well,” said McGrath. “They made it easy for me, and they didn’t complain when I wanted to play conservative small ball.”

Even when McGrath let them play long ball during the 1970 state tournament, the Falcons delivered. They won a pair of nail-biters, 5-4 over Billerica in the first game and 5-4 over Matignon in the semifinal round.

They let loose in their other two playoff contests: a 12-5 revenge rout of Winthrop in the quarterfinals and the 14-5 title game blowout of North Attleboro.

“We were lucky and good,” said Madden, a star quarterback for the DHS football team who has lived his whole life in the Danversport section of town.

“We were lucky to get out of the first round,” admitted Munzing, whose older brother Paul was an ace hurler for McGrath. His younger brother Gary was a standout, too.

“Coach took a senior out of the lineup in the state tournament for a sophomore (Norm Zuk), who hit a game-tying triple late against Billerica. Norman played well all four games and had two hits against North Attleboro. That was Coach McGrath:  unorthodox, not afraid to take risks, unconventional, ahead of his time.”

The reasoning behind the move was simple, said McGrath.

“I thought Norman would give us more speed on the basepaths,” he said. “I may have taken a chance turning a JV outfielder into the varsity starting second baseman, but it paid off in every way I’d hoped.”

The playoff quarterfinal victory over Winthrop, powered by Madden and Pydynkowski home runs, was sweet because only days earlier the Vikings had beaten Danvers in a conference playoff game at Swampscott for the outright NEC title. The Falcons and Vikings had tied for first place with 12-2 records in the regular season; the Blue-and-White's two losses, both by one run, were to Winthrop and Marblehead.

Danvers avoided a third NEC loss when it rallied from a 4-run deficit at home and overtook Gloucester, 9-8. The triumph was keyed by a Hubbard grand slam in the bottom of the sixth to tie it, 8-8, followed by a St. Pierre solo shot to win it.

“We were a great hitting team,” said Munzing, who played baseball and football at the University of Maine, then coached Gardiner, Maine, High School football to an 84-50 record. “That made us a great team to pitch on.”

His son Patrick, a Maine state trooper, is the new Gardiner head football coach after playing for the team a generation ago.

Responding at the right time

Munzing and Chuck Flint were McGrath’s starters on the mound throughout the ’70 season, with Madden the primary reliever.

“I knew pitching could become a problem because I committed to a three-man staff,” McGrath admitted. “I didn’t know how much I could get out of those guys. But they always came though when we needed it most.”

State tourney Game No. 3 was yet another narrow escape, a 5-4 verdict over Matignon at Bridgewater State. Pydynkowski and Arrington pulled off a double steal to tie the game (4-4) in the seventh before St. Pierre tripled and Pike singled him home in the eighth.

“On the one hand,” McGrath pointed out, “we came mighty close to having an undefeated season. But on the other hand we were fortunate to win some close games we easily could have lost ... maybe it was our destiny.”

The title game with North Attleboro began in nightmare fashion for the Falcons. McGrath’s limited hurler options nearly blew up in his face as neither Munzing nor Madden had good stuff at the outset, allowing North Attleboro to race out to a 5-2 first inning lead. But the Falcons rallied and tied it, 5-5, in the top of the second, before North Attleboro threatened again in the bottom of the frame.

Enter junior fireballer Flint in relief, facing two runners on with none out. Still nagged by a serious nose injury (deviated septum) he initially suffered during football season that caused him to miss two weeks of the baseball campaign, Flint got out of the jam — then proceeded to throw seven innings of shutout relief with 7 strikeouts. Meanwhile, his offense pulverized North Attleboro pitchers for seven more runs and 21 total hits.

“It was amazing how the final game developed,” Madden remembered. “We fall way behind, the offense responds beautifully. Our first two pitchers, Rob and me, struggle on the mound, but our last hope, Chuckie, is near perfect for eight innings.”

And the offense was the best it had been during the championship run, with the 6-run eighth inning clinching the victory. Eight of the nine starters delivered at least two hits each, led by Pike’s four. St. Pierre and Pydynkowski had three apiece, while Arrington, Munzing, Hubbard, Zuk and Madden added two each. Pike and Hubbard had triples; St. Pierre, Flint and Pydynkowski doubles.

The analytical McGrath looked back on a key play from Munzing in the last of the first inning.

“They’d scored five and were looking for more with runners in scoring position,” McGrath said. “That’s when Robbie picked off the runner at third base to end the inning, thankfully. That play seemed to ignite the kids.”

McGrath made a huge pivotal move during the preseason when he shifted St. Pierre from shortstop to catcher. “Kenny could play anywhere as one of the greatest athletes I ever saw, so I had no hesitation making the move,” McGrath said. St. Pierre went on to become All-Big Ten at the University of Indiana as a baseball catcher and football fullback.

This was the group that lost that heartbreaking East Regional Little League final five years earlier, as well as a 19-inning game in ’69 to Saugus High. They proved to be more than resilient.

“We were always confident, always even keel,” Madden said. “We didn’t mind making changes. We knew Coach was a brilliant baseball man.”

“Coach McGrath was a master manipulator on the baseball field, a genius,” added Munzing.

“We were a bunch of good guys who melded together just right,” said Pike, part of another superb Danvers baseball family led by his dad, Del, Sr. “We had the right combination — talent and top coaching. McGrath really knew the game.”

Sadly, three of the team’s key players have passed in recent years — Arrington, St. Pierre and Zuk. But their historic 1970 season will keep them and their teammates in the memory of the town’s baseball fans forever.

“They were a fabulous group to coach,” McGrath said. “That year was one of the most joyful coaching seasons I ever experienced because of the kids themselves, state title or no state title.”