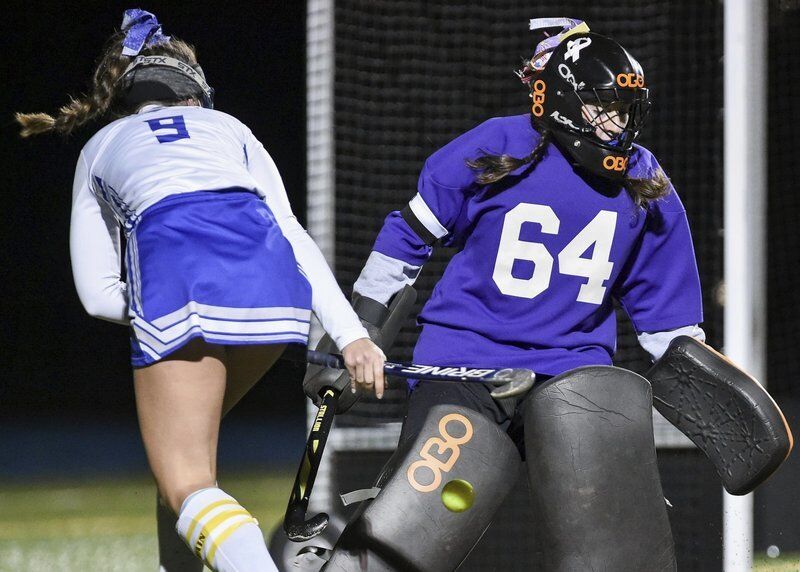 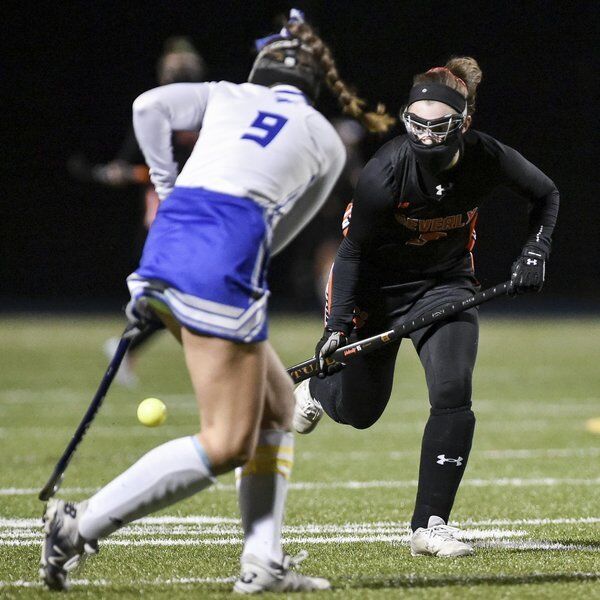 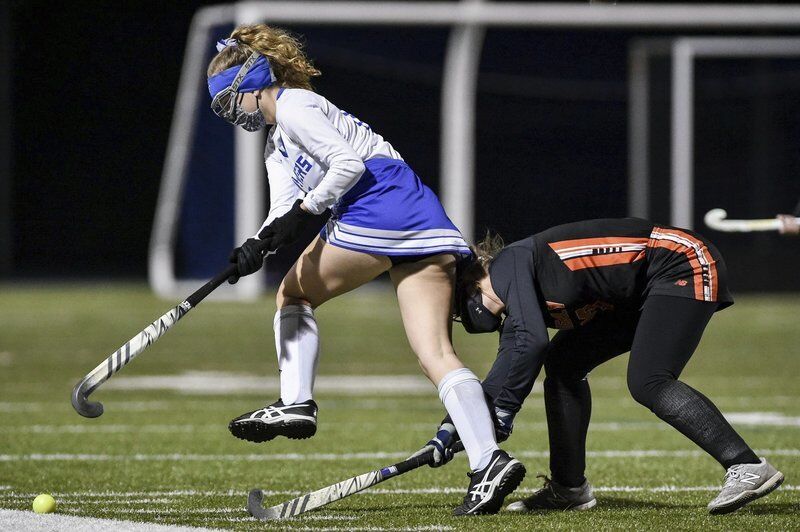 Danvers' Caitlin Hess leaps over the stik of Beverly's Noelle McLane while trying to gain control of the ball during Thursday night's game at Morse Field.JAIME CAMPOS/Staff photo 11/19/2020 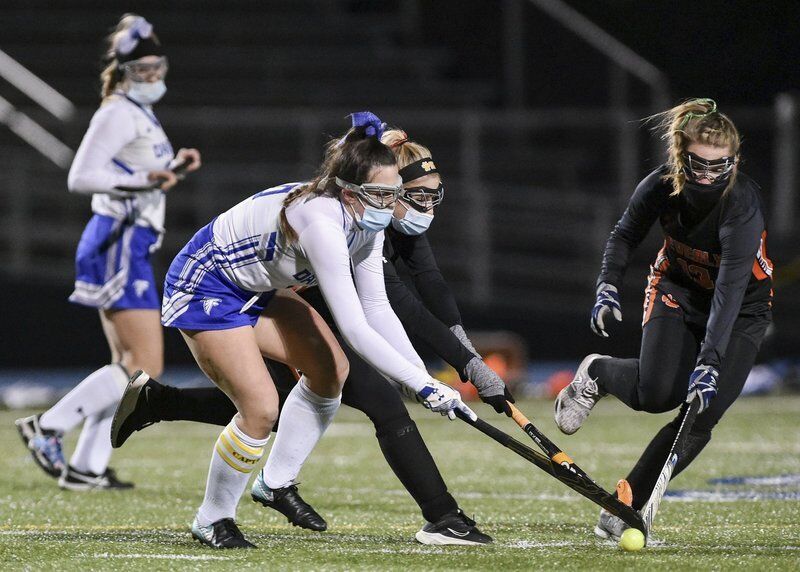 Danvers captain Janessa Marchegiani reaches out for the ball against Beverly players Caroline Hickey (22) and Noelle McLane Thursday night in Danvers. Marchegiani and the Falcons prevailed, 2-1, in the season finale for both clubs.JAIME CAMPOS/Staff photo 11/19/2020 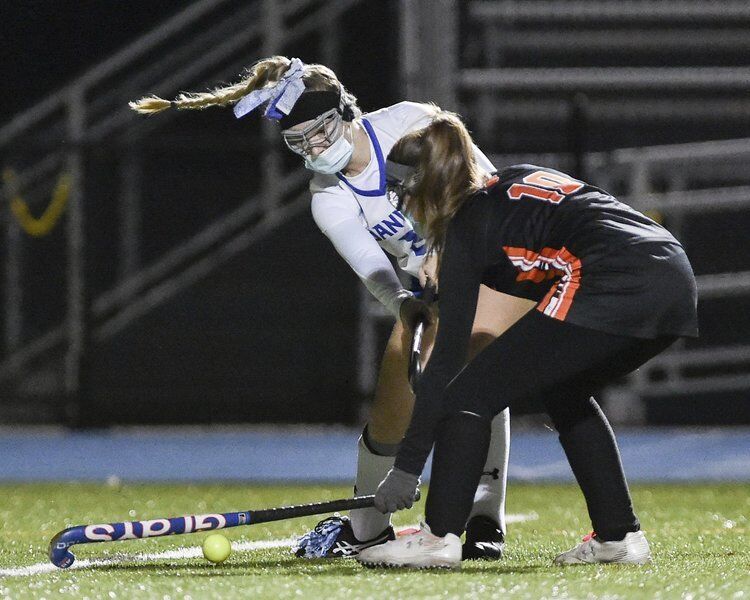 Sophomore Emma Wilichoski of Danvers sneaks the ball past Beverly senior defender Sydney Ruggieri during Thursday night's game at Morse Field. Wilichoski assisted on both of her team's goals in its 2-1 victory.JAIME CAMPOS/Staff photo 11/19/2020

Danvers' Caitlin Hess leaps over the stik of Beverly's Noelle McLane while trying to gain control of the ball during Thursday night's game at Morse Field.JAIME CAMPOS/Staff photo 11/19/2020

Danvers captain Janessa Marchegiani reaches out for the ball against Beverly players Caroline Hickey (22) and Noelle McLane Thursday night in Danvers. Marchegiani and the Falcons prevailed, 2-1, in the season finale for both clubs.JAIME CAMPOS/Staff photo 11/19/2020

Sophomore Emma Wilichoski of Danvers sneaks the ball past Beverly senior defender Sydney Ruggieri during Thursday night's game at Morse Field. Wilichoski assisted on both of her team's goals in its 2-1 victory.JAIME CAMPOS/Staff photo 11/19/2020

That was the feeling for head coach Jill McGinnity and her Danvers High field hockey squad Thursday night, as they celebrated their just-concluded 2020 campaign by taking turns hitting a piñata shaped like a taco as it hung from one of the goalposts at Morse Field.

Happy in that they ended the season with a victory, taking a 2-1 triumph over their rivals from Beverly High on a cool, windy evening. Emotional, knowing that this season, which at one point they wondered if it would ever transpire, had finally reached the end.

"It's always nice when your last game is a win; that doesn't happen very often unless you're state champs," said McGinnity, mentioning that Jimmy Hinchion, the highly successful head coach of the Danvers High girls soccer team, got to know what that felt like when his club won the 2017 state crown.

"But it's a funny feeling, because you still know this is it. It's hard when it's over. Our (eight) seniors, they've been here since the eighth grade, when they got waivers to play. It's hard to say goodbye to them."

Senior captain Ashley Curcuru had both of the Falcons' goals, giving her six in two games this week. She finished the season second on the club in goals (10) and total points, with talented sophomore Emma Wilichoski assisting on both of her tallies.

Having been a defender coming into the season, Curcuru moved up to play more of an offensive role and it paid off handsomely for the Blue-and-White.

"Her stick skills and finesse are phenomenal, her stick jabs are phenomenal," said McGinnity. "So we figured, 'Why wait for the play to come to you on defense?' We decided to bring her up and she rocked it.

"(Fellow captain) Janessa Marchegiani, she's a rock star, too. She doesn't always put the points up, but she's always making the play behind the play."

Beverly, which ended its season a deceiving 2-8-2, didn't have a single shot on goal through three quarters but cashed in when they had the opportunity to do so with 11 minutes remaining.

Junior Jamie DuPont made a solid rush upfield and got through the Falcons' defense, putting a shot on senior goalkeeper Brigid Churchill. That ball was kicked away, but senior captain Anne Curtin was there for the rebound and knocked it home cleanly, slicing the Panthers' deficit in half.

"Scoring wasn't our strength this season; we certainly played a lot more defense," acknowledged Beverly head coach Trish Murphy. "That's why it was so good to see Anne score that goal in her final game after we moved her up to forward. And Jamie, for her to set that up, that's a true testament to the type of player she is. That was a great example of teammates working together to make something big happen."

As has become the norm all season, Panther senior captain Julia Otterbein was again terrific in goal. She finished with 21 saves, the second-most she's had in a game this fall. Nine of those came in the third quarter. She finished the season with 194 saves and an average of nearly 16.2 stops per contest, both of which far and away led all North Shore keepers.

"To me, Julia had her best season," Murphy said of the four-year contributor. "I'm very proud of how she played and to finish with a performance like this. It's a fitting ending."

In front of Otterbein, defenders such as senior Sydney Ruggieri, sophomore Cerys Murphy and freshman Ella Maloblocki all did an excellent job blocking shots and clearing the zone.