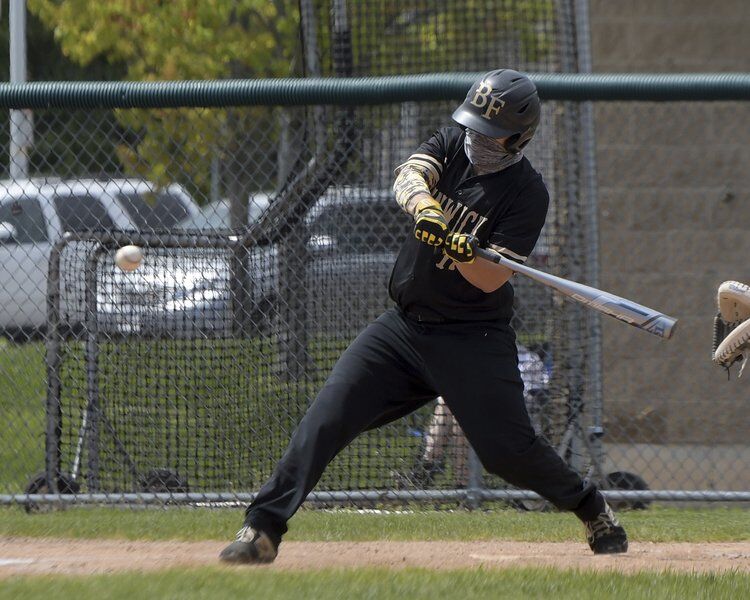 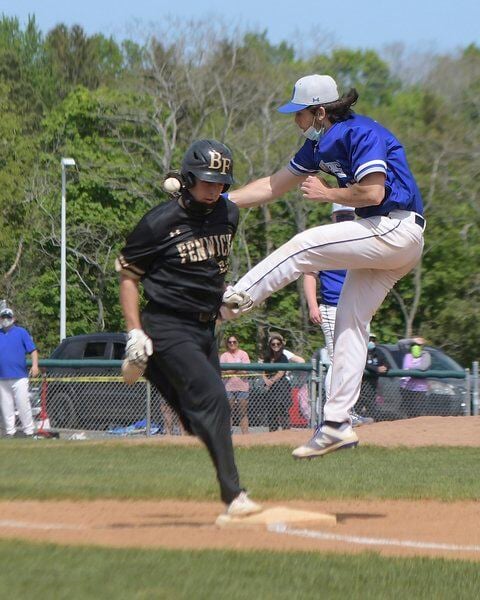 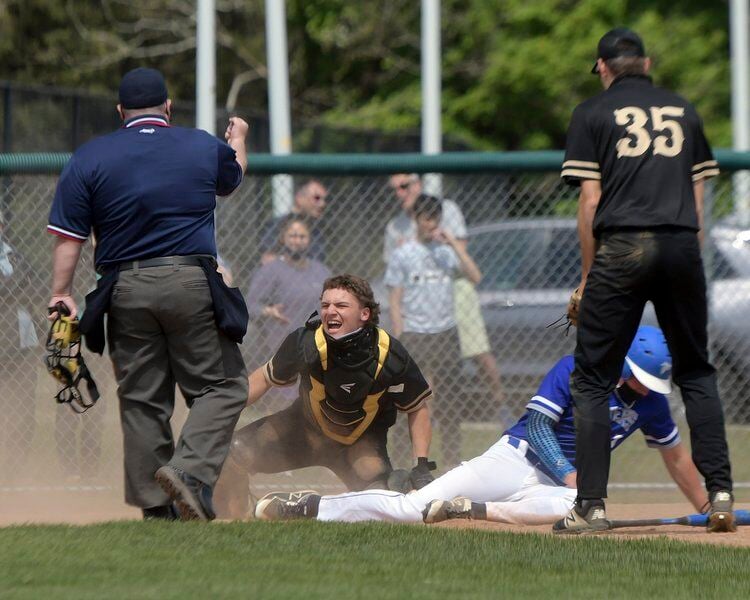 Bishop Fenwick catcher Chris Faraca reacts after Danvers' Steve Reardon is called out at the plate in the fifth inning of the Falcons eventual 4-3 win. Rose Raymond photo 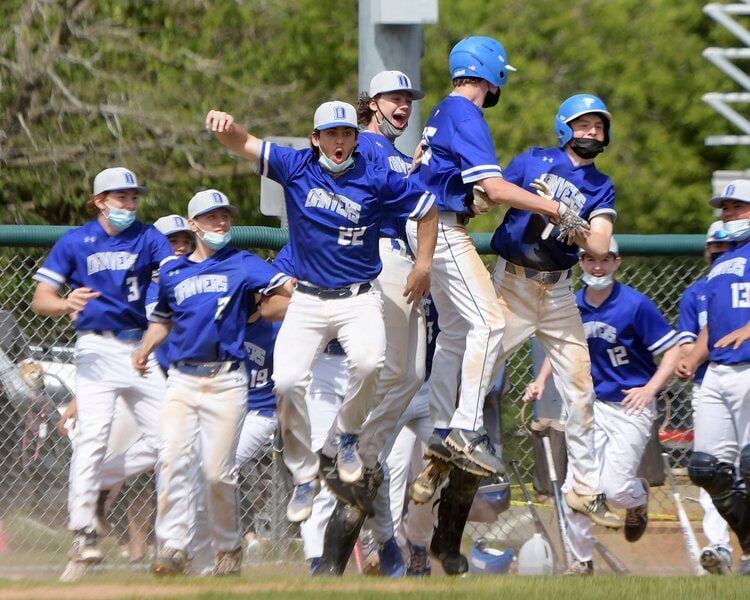 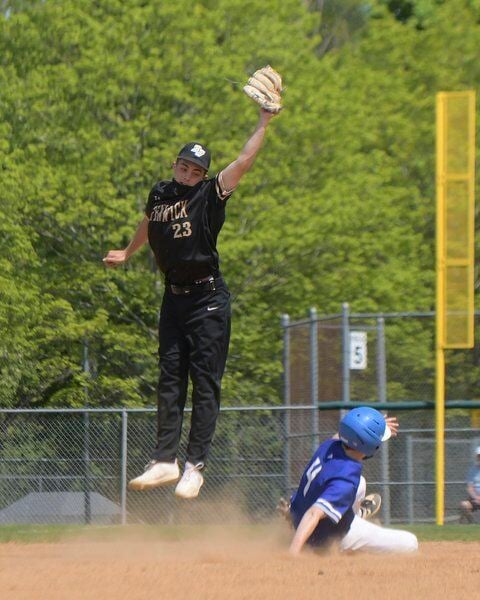 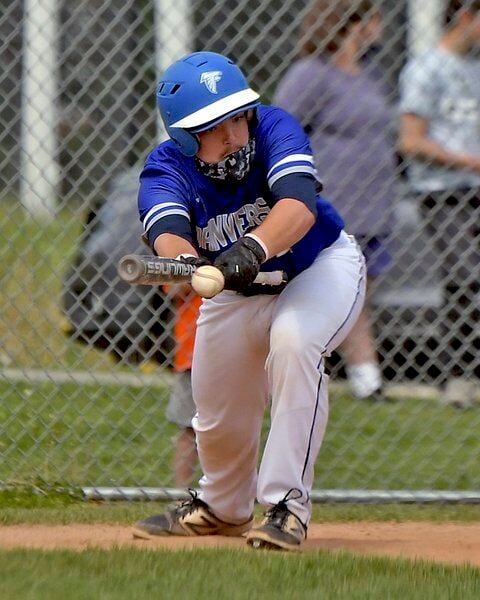 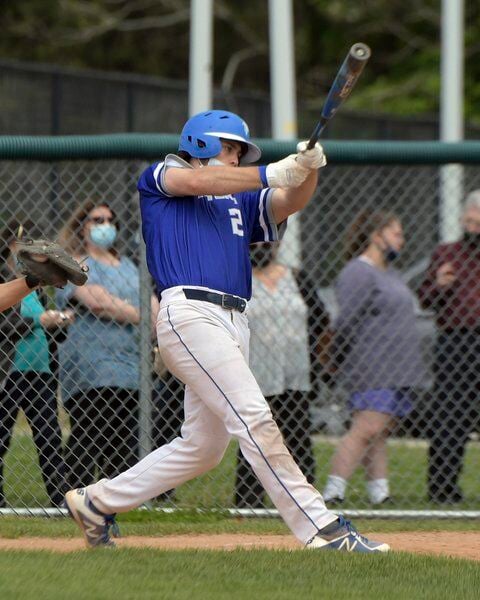 Danvers' Tyler Robinson worked a walk and stole a base in his team's win over Fenwick on Saturday. Rose Raymond photo

Bishop Fenwick catcher Chris Faraca reacts after Danvers' Steve Reardon is called out at the plate in the fifth inning of the Falcons eventual 4-3 win. Rose Raymond photo

Danvers' Tyler Robinson worked a walk and stole a base in his team's win over Fenwick on Saturday. Rose Raymond photo

DANVERS — Life on the baseball field is always easier when the leadoff man finds his way on base.

In the late innings Saturday at Twi Field, getting off on that right foot set the table for a thrilling Danvers High comeback.

The Falcons got the lead man on and scored in each of the last two innings to erase a Bishop Fenwick lead, walking off with a 4-3 win when sophomore Joe Zamejtis (leadoff single) trotted home on a two-out error in the bottom of the seventh.

An inning earlier, freshman Caleb White worked a leadoff walk and scored the tying run on Tyler O'Neil's RBI single. The Falcons (3-2) stranded the go-ahead run in scoring position, but cashed in on their chance to win in the next half-frame.

"You can't script those kinds of moments. Guys have to be forced into the moment and be ready when it comes," said Danvers head coach Shawn Secondini, whose squad has already played a wealth of games decided in the final at-bat in just two weeks' time. "Being in those close games is teaching us what to do to get the win rather than let the win be taken from us."

Fenwick (2-3) summoned Brandon Bloom from the bullpen with two on and no outs in the seventh. After a sacrifice bunt, an intentional walk loaded the bags and Bloom got a strikeout looking to put the Falcons down to their final out. Danvers' John Curran hit a sharp grounder to short and the throw sailed away to allow the winning run home.

"Brandon competed in a really big spot. He made a pitch and got a ground ball," said Fenwick coach Russ Steeves. "Our shortstop makes that play nine times out of ten. That's baseball ... this was a good game and sometimes those plays don't go your way."

Danvers' battery was immense in the win. Senior catcher Adam Bridgeo gunned down the potential go-ahead run trying to steal second in both the sixth and seventh innings and senior righty Nolan Hills threw all seven innings to earn the win. He scattered six hits with no walks and one hit batter, working around five errors committed behind him.

"That's the second time this year Nolan's been our stopped after a tough loss. He comes out and just deals," said Secondini. "He's a horse. He's the definition of a battler."

The Falcons had a 2-0 lead early when Zack Hamel's double knocked in Curran and O'Neil. Fenwick chipped away, getting one on a fielder's choice RBI by Chris Faraca in the third and one on a fielder's choice RBI by Bloom in the fourth. Alex Gonzalez singled and scored on an error to give Fenwick it's only lead in the fifth, but the Crusaders stranded six on base and technically went a frustrating 0-for-11 with men in scoring position (including errors).

"We're just not hitting. It feels like we're leaving a million guys on base," said Steeves, whose team was right back at it Sunday against another Northeastern Conference foe, Swampscott. "Guys are putting a lot of pressure on themselves. We have to relax in those spots and we'll come around."

Giovanni Mercurio pitched well in his first varsity start for Fenwick, scattering three hits over four innings. Scott Emerson threw the next two-plus, impressing with back-to-back K's to end the sixth with the potential go-ahead run aboard. Fenwick also cut down the potential tying run with a great relay from Tucker Destino to the plate in the fifth.

For Danvers, Steve Reardon reached three times and Brandon Trohan worked two walks. Curran, Zamejtis and O'Neil had hits and Tyler Robinson worked a walk and stole a base.

"The two guys Bridgeo threw out were huge. Adam was outstanding today," said Secondini. "This is a great team win. We used 14 or 15 guys, and that's the type of team we're building. It takes everyone contributing when their number's called to beat a really good team like Fenwick."