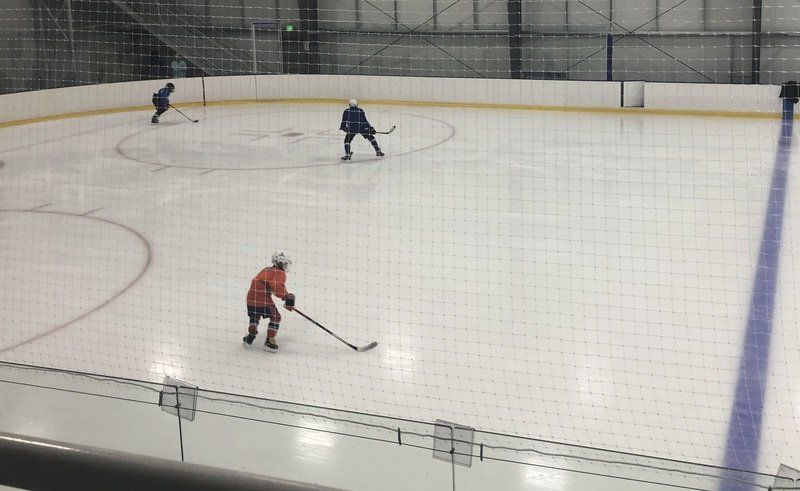 MIDDLETON -- Youth hockey players from all over the North Shore and beyond flocked to Essex Sports Center beginning last week and under their masks were smiles so bright the wattage could light up Times Square.

That joy at being back in the rink came from spending nearly three months away from the game they love. When the state's Phase 2 of COVID-19 reopening hit on June 8, Essex Sports Center and CN Ice Management were ready to meet the region's ravenous hockey demand.

Programs for boys and girls from the U8 level up to age 17 have been running every day on both sheets of ice at the Middleton complex. For both hockey and figure skating, every care has been taken to meet the state's social distancing requirements to make it a safe and fun environment.

Players wear masks when entering the rink and can take them off once they get on the ice. Locker rooms are closed so some are getting equipment on in the parking lot and there are chairs set up six feet apart inside as well. The ice sessions have been extended to 80 minutes with extra time in between so groups can remain apart. Currently, each skater is allowed one spectator who must be masked and maintain distance from other onlookers.

"It's been really positive," said Chris Nagy, who runs both CN Ice Management and CN Hockey. "Parents are coming in wondering what it all looks like, peeking around, and you can tell they get comfortable once they see all the precautions."

On the ice, groups were initially limited to ten (now 12) and are kept apart at different ends of the rink. There are no shared water bottles, no mini games or scrimmages of any kind and no contact or checking allowed. Just about every session has been sold out. They begin at 7 a.m. and run through the afternoon including skills sessions, defense clinics with former pro Will O'Neill and forward skills with former pro Chris Dyment, and edging skating clinics with figure skating director Julie Conrad,

"The kids are fired up. It's great to be back on the ice," said O'Neill, who hails from Salem and became an assistant at Endicott College after an eight-year professional career.

"It's a little different with the masks and being six feet apart. The kids are aware of the rules and they're adapting. They're cooperating. It's working really well."

A Hockey East all-star at the University of Maine, O'Neill reached the NHL with Philadelphia and has enjoyed his foray into coaching. Besides assisting the nationally ranked Gulls men's team, he's done clinics and tutoring with Nagy's group and his own O'Neill Hockey (on Instagram @oneillhockey).

"I try to make the drills resemble a shift so the route you're taking it what looks like what you'd do on a game shift," said O'Neill, who had another NHLer in Lynnfield's Brian Flynn with him for some of this week's clinics. "Coaching has been great. It's nice to be able to stay involved in the game, share some wisdom, maybe tell kids things I learned at a later age that really helped me."

Cost ranges from $60 to $90 for various sessions and a complete schedule can be found on Twitter @CN16 or at CNhockey.com.

As the state's reopening plan continues, the hope is options for youth hockey and all sports will increase. Some hockey games could be played in Phase 3, although the need for locker rooms to be open is a potential hurdle. Whatever the safest options are, Nagy and his team will be on top of things so boys and girls can yearning to skate can get some taste of normalcy.

"The kids are loving it. They're excited and I think they're a little rejuvenated," Nagy said.