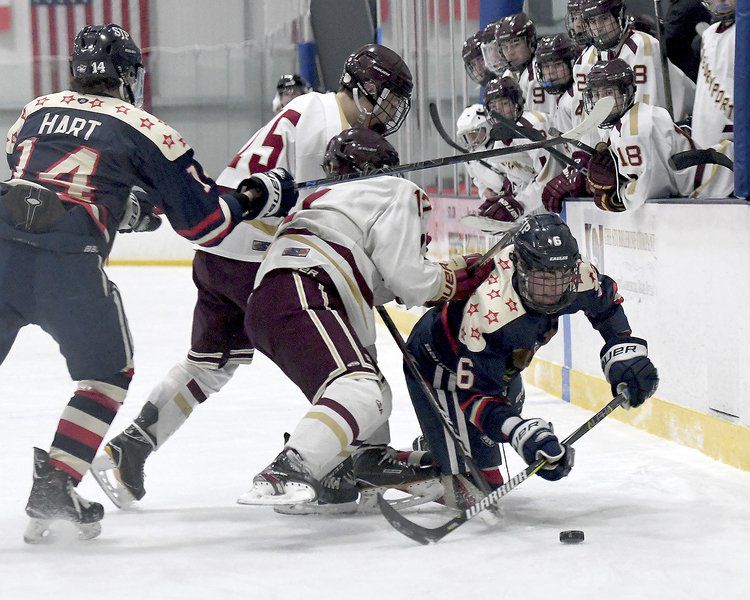 Rose Raymond/photo. St. John's Prep's Evan Moore (6) falls to the ice as he tries to make a play along the boards against Newburyport on Saturday. 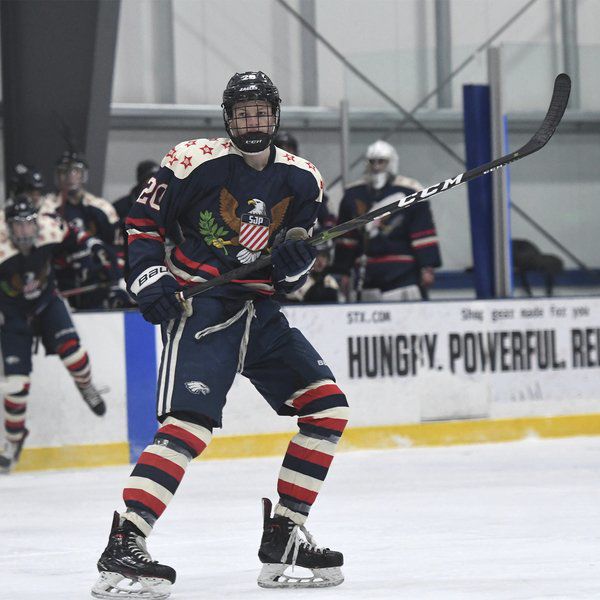 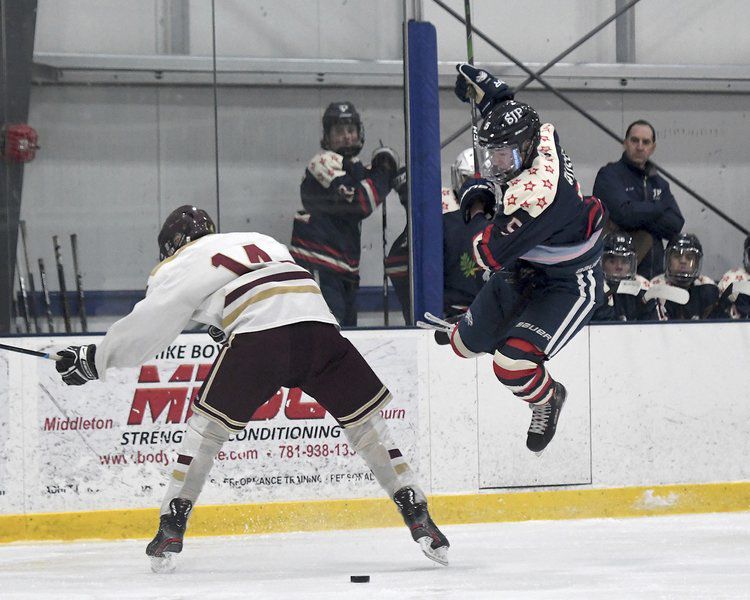 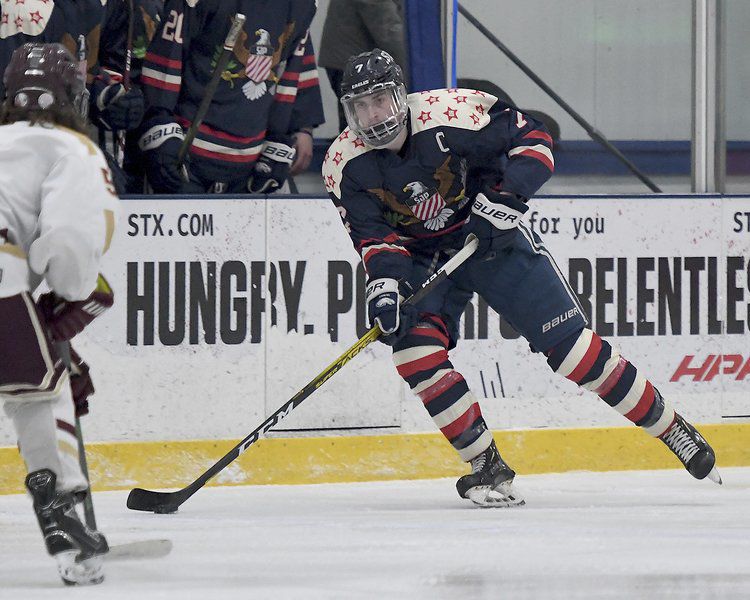 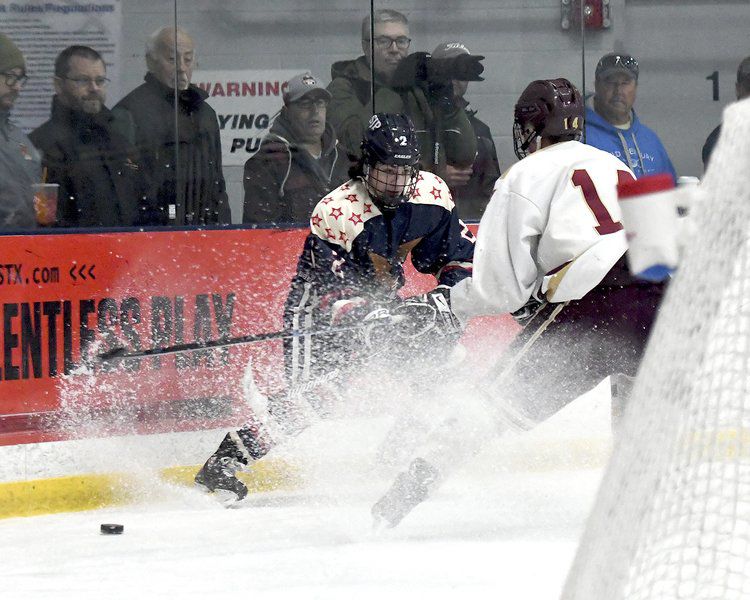 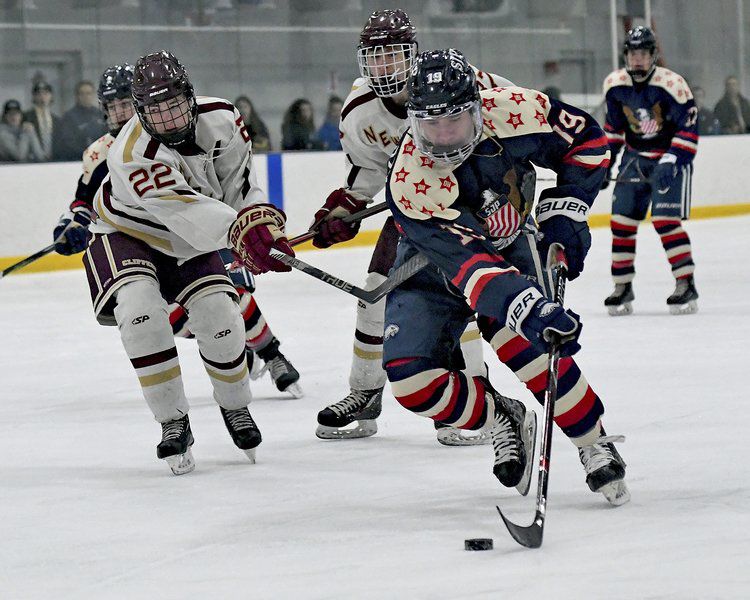 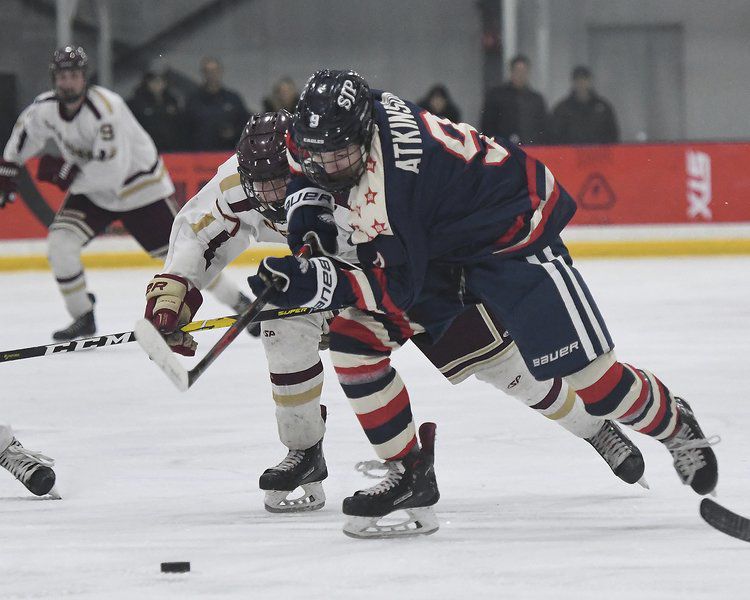 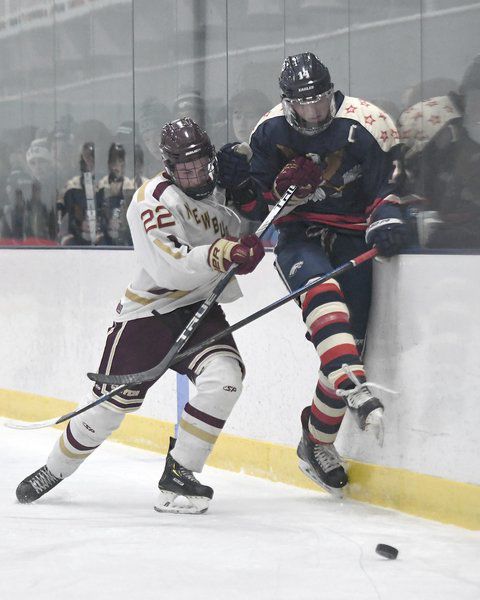 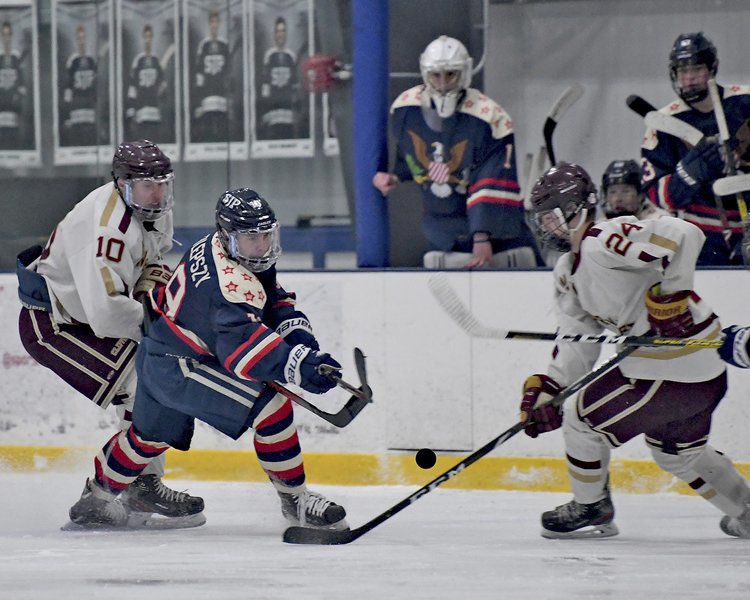 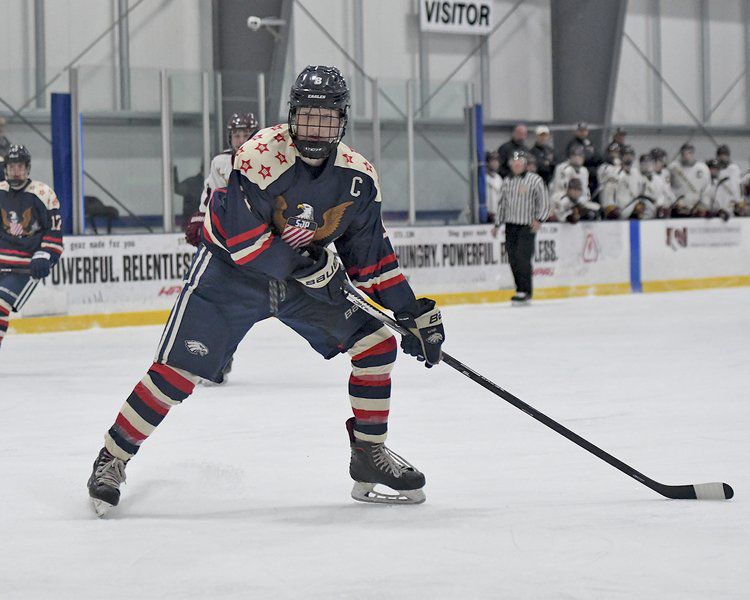 Rose Raymond/photo. St. John's Prep's Evan Moore (6) falls to the ice as he tries to make a play along the boards against Newburyport on Saturday.

MIDDLETON — The Lt. Derek Hines Memorial Game is always a special one for St. John's Prep.

Hines was a four-year varsity player for the Eagles, graduated in 1999 and went on to captain West Point. He joined the 173rd Airborne Rangers, and was deployed to Afghanistan where he was killed in 2005.

The 12th annual game featured Newburyport for the fourth time. It is the community where the Hines family lives, and before the game his brother, Trevor, who played for Babson College for four years, gave an emotional speech to the Eagles. They went out and beat the Clippers, 10-2, wearing sharp red, white and blue jerseys with stars on the shoulders and a patriotic eagle on the front.

"Trevor's speech was very emotional, and if there was a dry eye in the room I don't know how it could happen," said Prep coach Kristian Hanson. "It was an amazing job, talking about Derek and what an inspiration he is. Every year we look forward to this game. It helps build team chemistry and get us ready for the push to the tourney."

It was a back and forth game for most of the first period with the home team taking an early 1-0 lead on a goal by Ned Malolepszy (four points) that surprised starting freshman netminder Jamie Brooks and rolled across the line.

The turning point came late in the first period when St. John's picked up two penalties in a matter of seconds, giving Newburyport a five-on-three. Senior goalie Kyle Westfall denied several strong bids, and shortly after the penalties ended the Eagles scored three times to take a 4-0 lead.

Before the period ended the Eagles had poured in three more; Zack McKenelley, Jake DiNapoli, and Ryan Hart all scored. The Prep had taken control and never let up.

"This is a special game and we talked about trying to get a lead early," said Clipper coach Paul Yameen, whose team (now 6-10-1) was eliminated from any tourney hopes with the loss. "St. John's Prep has a good team every year, and they have a lot of incentive to win this one.

"We started off fine, and if we could have gotten a bounce things might have gone better. That first goal was a soft one, and everything snowballed from there. We only have three seniors; it's a very young team while they have so many seniors (14). The kids fought hard right to the end and never quit. We'll try to build off that."

The Clippers changed goalies for the second period with junior Tristan Vincent taking over. He was greeted by DiNapoli, who netted his second of the afternoon in the first minute from Ryan Webb and senior defensemen Jack Gilligan. Cole Lopilato, DiNapoli for the hat trick, and captain Patrick Moran made it 8-0 heading into the final period. In all, 18 different players found the scoresheet for the Prep (8-4-5) with the line of DiNapoli, Ryan Webb and Melolepszy accounting for 10 points.

"That's their first time together," said Hanson. "They can all fly and we thought we'd see how they'd work. Webb and Malolepszy both gave DiNapoli great passes."

Westfall earned the hard hat for his performance in goal in the first two periods before Cam Smith took over for the last 15 minutes. He stopped all 13 shots, including three chances that were labeled during the time the Eagles were killing off two penalties, and also picked up an assist on the first goal.

"The shots were 9-9 in the first period and Kyle made some really nice stops when it mattered most," said Hanson. "He allowed us to get our feet under us, and he now leads our goalie in points."

Even though they were down by eight goals, the Clippers never let down and scored twice in the last period on goals by Ben Reynolds and Zachary Wilson.

Cam Russo and Jake Caruso, who is from Peabody, also found the back of the net for the Eagles.

"That's the first varsity goal for Caruso, and it was a nice one," said Hanson. "The kids all love him, and he works so hard all the time. We're all happy for Jake."

Before the game the Prep captains presented a $23,830 check to the Hines family for the Lt. Derek Hines Soldiers Assistance Fund along with a No. 23 game jersey.

"It's heartwarming to see the St. John's Prep and Newburyport communities honor Derek and have his legacy live on," said Derek's father Steve Hines. "Each year they come up with a new shirt for the game, and we've got quite the collection. I'm honored and humbled by this show of support. It's hard when you lose a child, and time does not cure it. This year I was happy to pass on pre-game speech duties to Trevor."