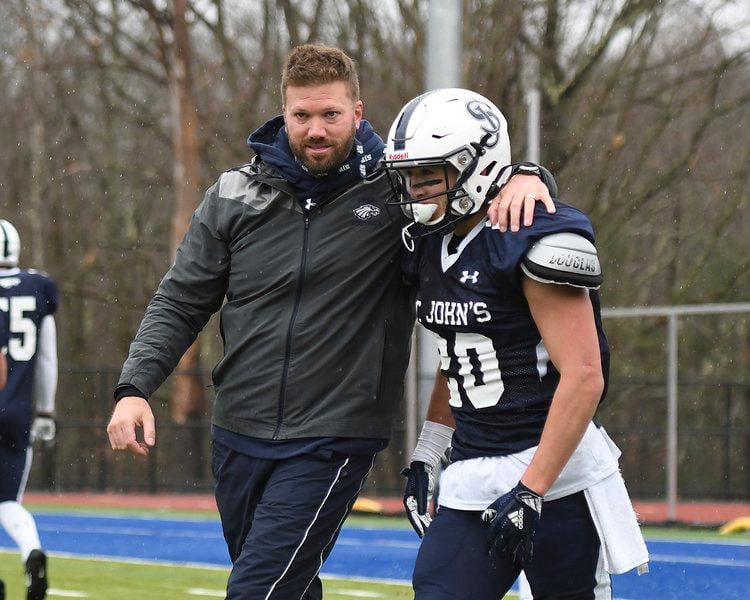 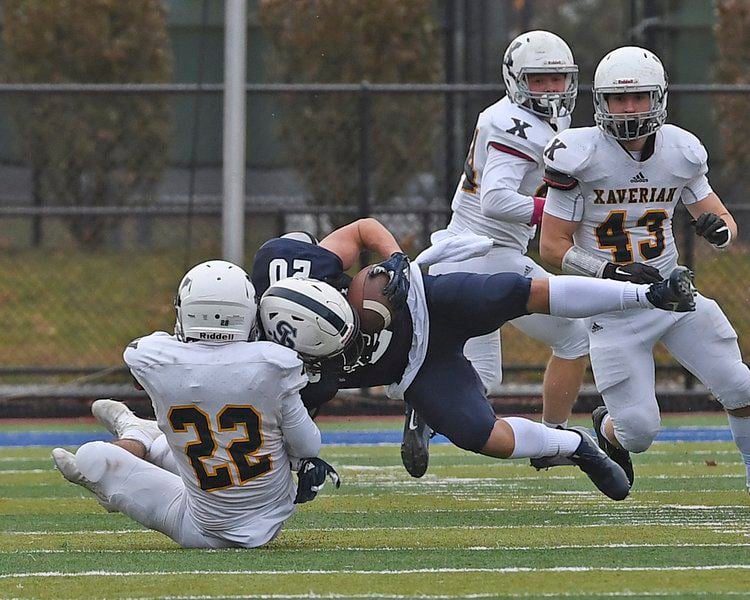 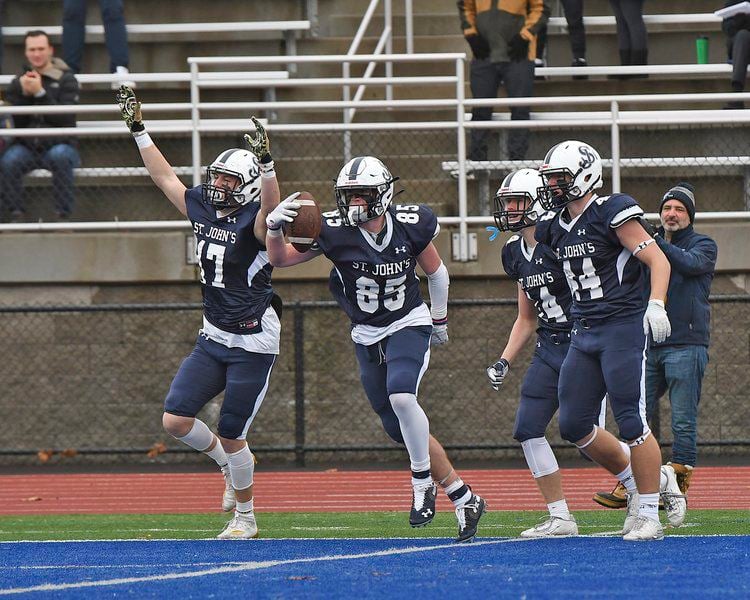 DANVERS — The best present St. John's Prep football coach Brian St. Pierre could have received on the day he turned 40 was a victory over arch rival Xaverian. His team delivered that gift with a 35-0 shutout in a game the hosts controlled from start to finish Thanksgiving morning.

It had been a while — six years — to be exact since the Eagles beat the Hawks, and the defending Super Bowl champs were still feeling the sting of losing against their rivals last year on the holiday at Fenway Park.

"Anybody who says Thanksgiving doesn't matter any longer because of the new playoff system should come to our game. It definitely matters. The offense did a great job getting out to an early lead, and James Guy ran well. We've been riding our offensive line the last few weeks, and those guys keep coming through," said St. Pierre, who also touched on last year's setback and finally getting a win over the rival Hawks.

"That was a tough loss because I felt we were definitely the better team. We've had our hands full against these guys recently, and even though they've had a tough year (4-7) this is always a big one."

Guy, the speedy sophomore, now has 940 yards rushing and 14 touchdowns after collecting three more against Xaverian while going for 184 yards.

The Eagles wasted no time taking advantage of mistakes by the visitors. Matt Mitchell intercepted a Mike Berluti pass, and four plays later SJP was on the board on a 50-yard touchdown run by Guy. That score was set up by a Matt Crowley to Matt Duchemin 22-yard pass, one of four catches by the senior wide receiver.

Duchemin had a terrific game on both offense and defense, picking off a Berluti pass three plays later. After a pair of Guy carries, Crowley found Anthony Fagan in the left corner of the end zone for a 9-yard TD pass, and with less than six minutes gone in the game the home team had a 14-0 lead. Liam Fabbri made all five kicks good on extra point attempts.

Xaverian answered with its best drive of the day, but on 4th-and-6 at the Prep 23-yard line Berluti's pass was incomplete and almost picked off by Joenel Aguero.

Guy struck again, this time on a 24-yard touchdown romp with 5:12 remaining in the first half to make it 21-0. It was set up by a fumble recovery by Tripp Clark and Pat Nistl as the defense delivered hard hits all morning. Two of the best were by Nistl and freshman Joenel Aguero.

The visitors ran three plays and were forced to punt. Duchemin fielded it at his own 10-yard line and went all the way to pay dirt, avoiding would be tacklers and stumbling but managing to keep his balance for a highlight reel 90-yard run, 28-0.

"After what happened last year, we all wanted to win this one bad," said Duchemin. "I caught the ball and don't really know how i was able to keep my balance and go all the way to the house. Matt did a great job getting me the ball. I knew he was looking for me to be open and concentrated on catching it when it came to me."

Xaverian answered with a long drive to the Prep 19-yard line, aided by two 15 yards penalties on the Eagles, but Jack Mcdonald tackled running back Mike Oates for a five yard loss, and after two incompletions the Hawks attempted a 35-yard field goal by Berluti that was no good into a stiff wind.

St. John's put any thoughts of a comeback to rest with a long scoring drive to open the second half, going 80 yards. It was capped by Guy's 3-yard run for his third score of the day.

"My offensive line was great," said Guy. "Every single game they block and open up big holes. It feels so good to beat Xaverian."

As satisfying as it was for the sophomore, it was even sweeter for the seniors tasting their first Turkey Day win. St. Pierre went to his bench in running time in the fourth quarter and kept the ball on the ground to run the clock down.

Senior captain Cooper Smith, a two way standout at guard and tackle, soaked in the satisfaction of his first win against Xaverian when it was over.

"This was my first win against them," said Smith. "I'm so proud of my team; we made a statement. We wanted to start fast and put it to them."

The Eagles poised for a team photo with the large trophy, and then sung Happy Birthday to their coach. Now 10-1 with the Super Bowl next, there's one remaining goal -- avenge the only loss of this season which was to championship next opponent, Catholic Memorial, by two points.