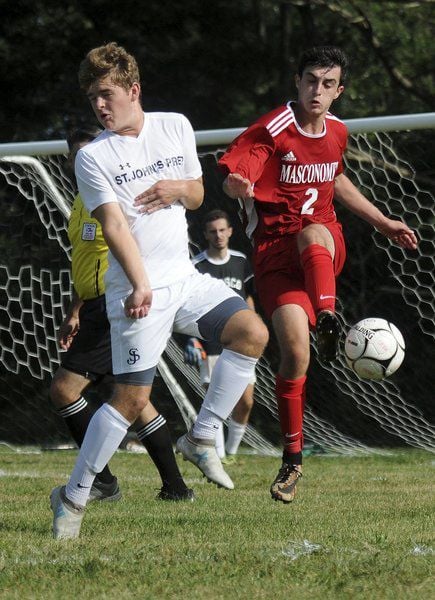 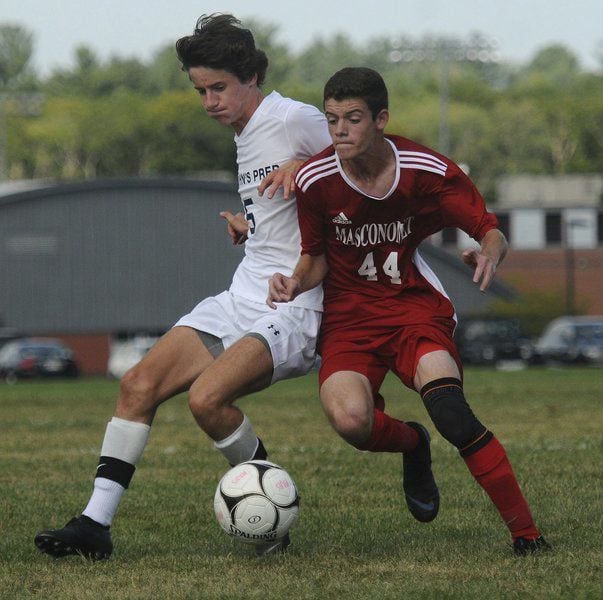 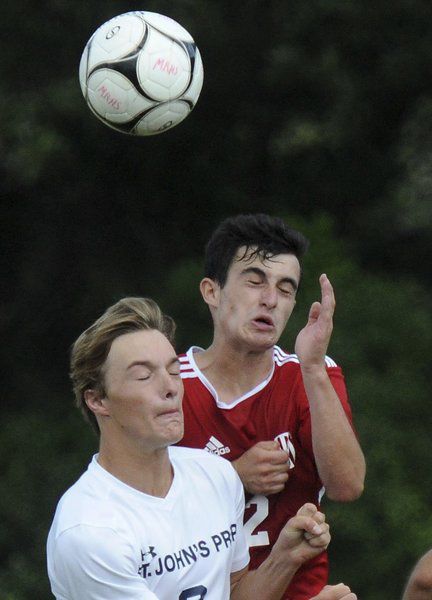 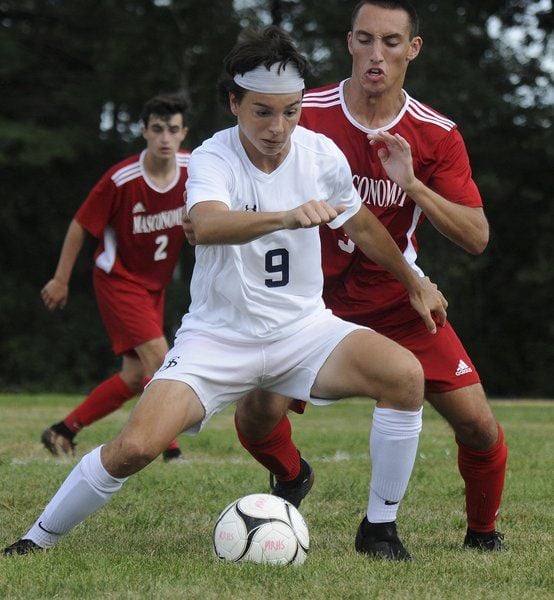 PAUL BILODEAU/Staff photosSt. John’s Zack Davis (9) keeps his body between the ball and Masco’s Charlie Karafotias while trying to maneuver toward the net during his team’s 2-1 victory on Tuesday afternoon.

PAUL BILODEAU/Staff photosSt. John’s Zack Davis (9) keeps his body between the ball and Masco’s Charlie Karafotias while trying to maneuver toward the net during his team’s 2-1 victory on Tuesday afternoon.

BOXFORD — One of the most memorable St. John’s Prep soccer goals from last fall had to be the second half rocket from Steven Yakita that gave the Eagles a dramatic win over Brookline in the Division 1 North title game. The decisive score was generated off a textbook corner kick from teammate Brian Brennan — a play the then-senior captain thrived off time and time again.

Both Yakita (28 goals last year) and Brennan (18 goals) have since graduated, but the Eagles’ success from the corner doesn’t seem to have vanquished one bit.

That reality was on full display in Tuesday’s season opener at Masconomet as Quinton Dooley put one home off a terrific corner ball from Zach Davis, giving his team a two-goal advantage midway through the second half. The Eagles went on to survive the difficult road test, topping the Chieftains, 2-1.

“Our corner kicks were great. That made the difference right there,” said Eagles head coach Dave Crowell, whose team reached double digits in corner kick attempts throughout the contest.

“We spend a lot of time drilling on corners and it paid off today and hopefully will continue to do so. And for Quinton Dooley playing in his first varsity game to get the game-winner vs. Masco ... doesn’t get much better than that.”

Dooley’s eventual game-winning marker put St. John’s Prep up 2-0 with just over 24 minutes remaining. But Masconomet responded almost immediately to cut its deficit in half.

Playing the ball up the left side of the pitch, Charlie Karafotias was met by Eagles’ keeper Christian Buckley just outside the box. Before Buckley was able to get a clean touch, Karafotias sent a low pass across the middle to a wide open Devin Ralph who calmly put it home. The goal perfectly epitomized everything Masconomet wanted to do offensively and put plenty of pressure into the visitors heading down the stretch.

“Great finish by Devin, great feed by Charlie Karafotias,” said Masco head coach Jared Scarpaci. “That entire play, that is what we do really well. We just couldn’t break through (another time), couldn’t get that pass in, that last touch in. But if we keep doing that it’ll find it’s way in. That assist will happen more and more.”

Masco stayed within striking distance for the remainder of the afternoon thanks to some solid defense in the middle and tremendous goalkeeping from Michael Duest (10 saves). The athletic senior made a number of key stops, including a phenomenal diving save to his right where he was able to knock the shot off far post.

“Mike came up with some big stops and Will Neuenhaus, Dom Gecoya, Connor Fitzgerald and Harrison Warshafsky all played very well (defensively) today, too,” said Scarpaci. “Both their goals came on pretty much dead balls, a corner kick and a free kick, so that means our defense is playing well during the flow of the game which is great.”

Despite their defensive prowess, the Chieftains ultimately couldn’t net the equalizer on the other end despite a variety of attempts in deep. Masco’s leading scorer from a year ago, Josh Rubin (26 goals), had to work hard and was held in check for the majority of the game.

The Eagles other goal came just before the halftime whistle, when junior Gabe Najim buried a free kick from the right hash deep outside the box. SJP‘s Jake Surette also turned in some strong minutes at center back, as did Will Andrews and Caleb Gallagher.

“I’m ecstatic. We’re basically a brand new team so to come in here and beat this team is a great start for us,” said Crowell. “We graduated eight starters and three kids (Brennan, Yakita and Mitch Collins) who had over 60 goals between them.”