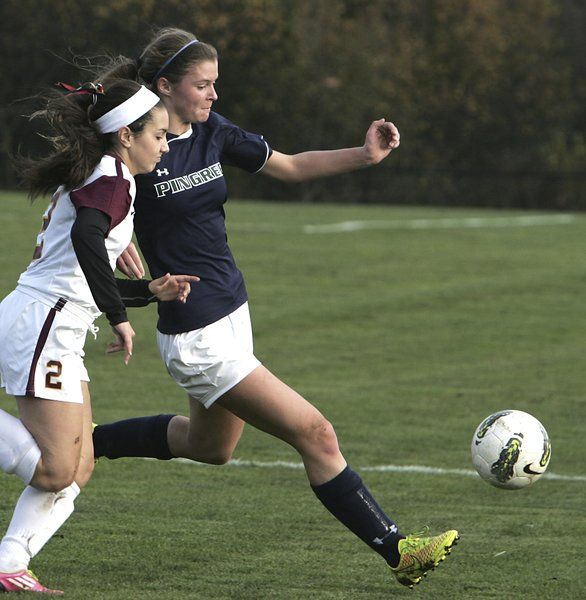 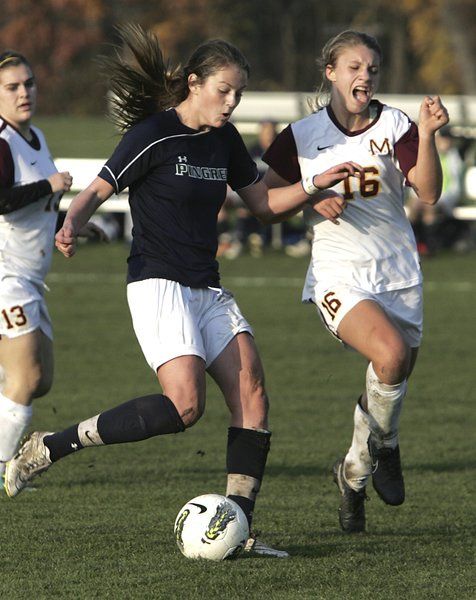 Kerri Zerfoss of the Pingree School is the Salem News Girls Soccer Player of the Year. 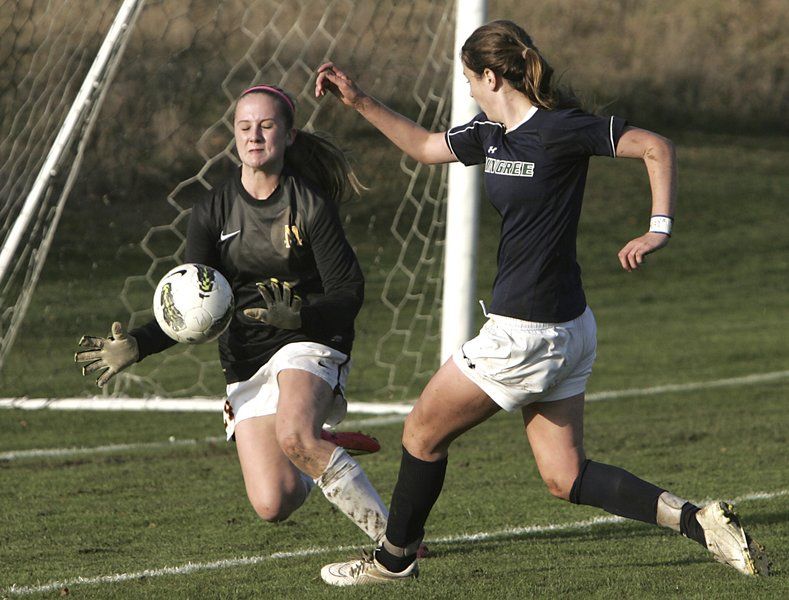 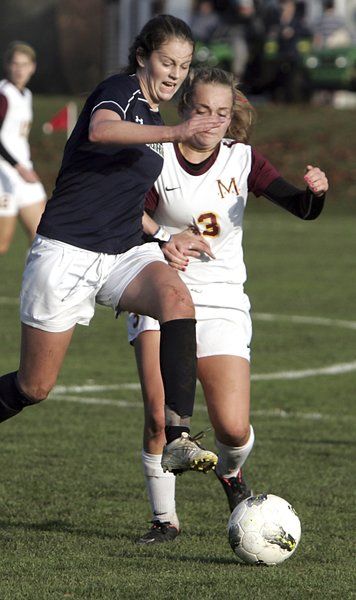 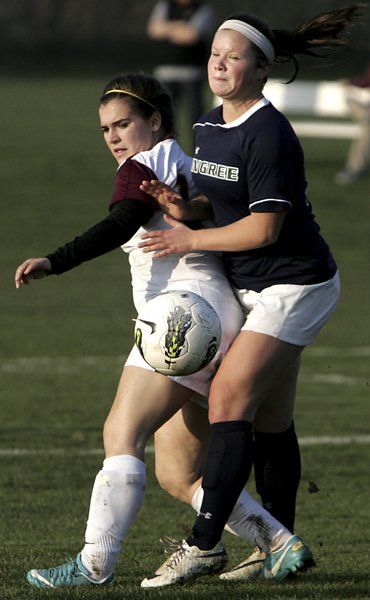 KEN YUSZKUS/Staff photo. Pingree's Charlotte Esty had a hat trick in her team's 9-1 win in the NEPSAC playoff yesterday. 11/12/14 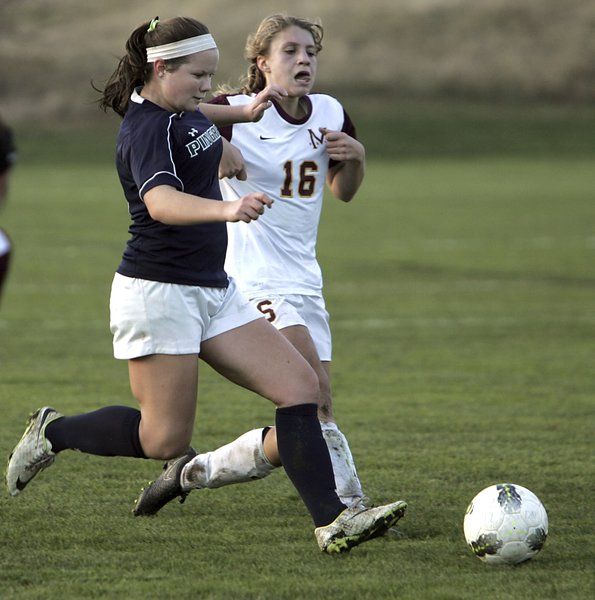 KEN YUSZKUS/Staff photo. Pingree's Charlotte Esty looks for a shot during the Highlanders' 9-1 playoff win yesterday. Esty had a hat trick and an assist to move over 100 points in her Pingree career. 11/12/14 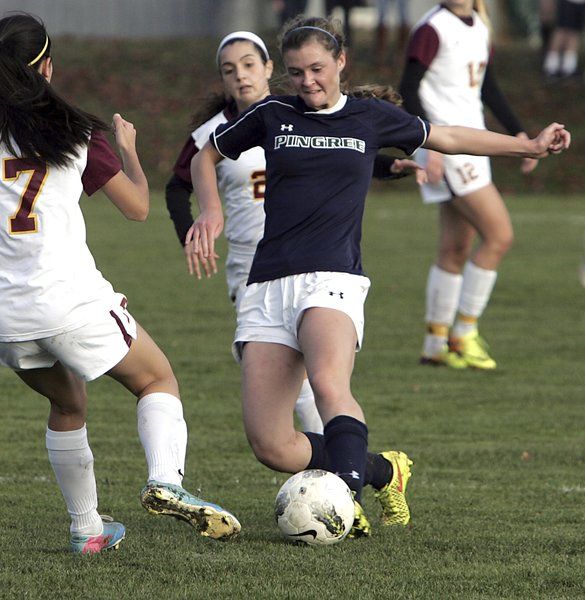 Kerri Zerfoss of the Pingree School is the Salem News Girls Soccer Player of the Year.

KEN YUSZKUS/Staff photo. Pingree's Charlotte Esty had a hat trick in her team's 9-1 win in the NEPSAC playoff yesterday. 11/12/14

KEN YUSZKUS/Staff photo. Pingree's Charlotte Esty looks for a shot during the Highlanders' 9-1 playoff win yesterday. Esty had a hat trick and an assist to move over 100 points in her Pingree career. 11/12/14

SOUTH HAMILTON — Pass after pass found its way through the middle of the soccer field at Pingree yesterday, and after every touch the Highlanders were looking for the next avenue towards the goal.

It didn’t matter if the passes were one, two or three touches, or simply rocket shots to the goal that created rebounds. Nearly everything Pingree tried seemed to work in an impressive 9-1 win over Marianapolis of Connecticut in the New England Prep School Athletic Council Class C quarterfinals.

Junior Char Esty had a hat trick and an assist to record her 100th career point at Pingree (she now has 102), and junior Kerri Zerfoss had two goals and two assists. Hannah Lejeune also had two goals while senior co-captains Taylor Landers and Emma Whalen also scored.

Now 15-1-1, Pingree used every player on the roster in one situation or another yesterday. Their versatility and dedication to possession and passing has made the Highlanders one of the top prep school teams in the region.

“You can put anyone on our team in any position and know that they can get it done,” said Zerfoss, who controls the flow of the game from a defensive mid position. She’s committed to play at Northeastern and has polished skills along with the ability to run forward and shoot with power when needed.

“We’re big on individual possession. When someone has it, and they keep it, then get it to someone else who can keep it, that’s when we’re able to slice through defenses.”

After winning the Class C New England title last season, Pingree is 31-2-2 over the last two years. They’ll host Lexington Christian on Saturday looking to advance to the regional finals, which would be played on Sunday at a neutral site.

“All we’re thinking about is how great it would be to send the seniors out with another title,” said Esty, a junior from Newbury who will be playing college soccer in the Ivy League at Dartmouth. “That would be surreal.”

Marianapolis (18-4-1) played a tough style and won possession by putting the ball in the air early in yesterday’s game. Once the Highlanders managed to snare the ball and connect on passes on the grass, they took control.

In the 14th minute, Zerfoss scored. About 15 minutes later, Esty got control on a rebound off a set piece and crossed to Lejeune, who finished for a 2-0 edge. Just before halftime Landers scored on Zerfoss’ rebound to make it 3-0 at the break.

“Early in the game we were trying to score with one pass, and that’s not how we play,” said Pingree coach Doc Simpson. “We build from the back to the mid and then up top, and once we did that we started to create.”

“We play a lot of athletic teams that want to keep it in the air, and once we get it to the ground and get it moved, we’re in good shape. Teams don’t know what to do to stop it,” said Esty.

Pingree scored four times over the final 20 minutes to ensure they’d be moving on to the next round of the New England tournament. The back line of June Kiely, Olivia Pena, Cameron Down and Abby Dirks also played well, and keepers Nicole Khachadourian and Lauren Giordano split a solid effort.

“When we start connecting on passes, it’s lights out. That’s our best way to play soccer,” Zerfoss said.

Saturday’s NEPSAC Class C semi will come against a familiar foe, and will be between the last several Eastern Independent League champions. Two years ago, Pingree went 10-1 in league action and Lexington Christian was 11-0; The last two years, Pingree’s been 11-0 and LCA finished 10-1. This year’s meeting was a 3-1 Highlander win.

“We talk about leaving your mark. You get four years of high school soccer and that’s it,” said Simpson. “The girls want to be a part of that history, of our school and the area, and to be thought of among some of those soccer team’s that have been around here.”