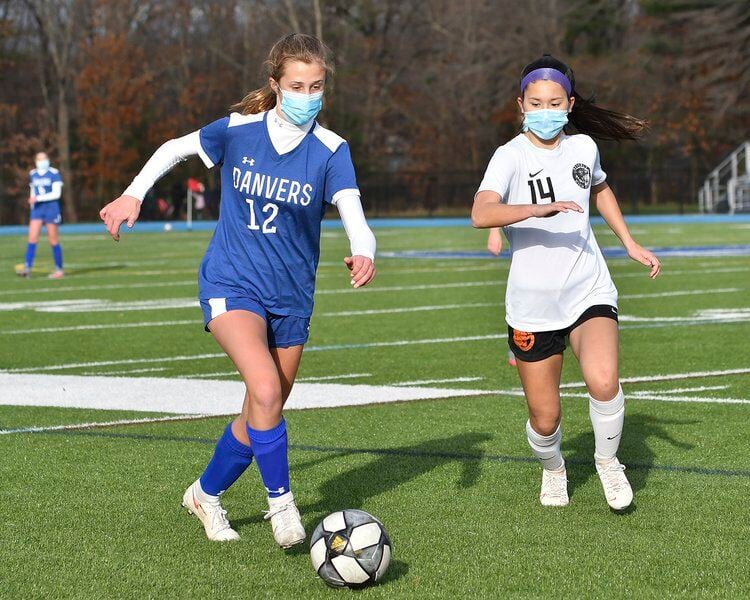 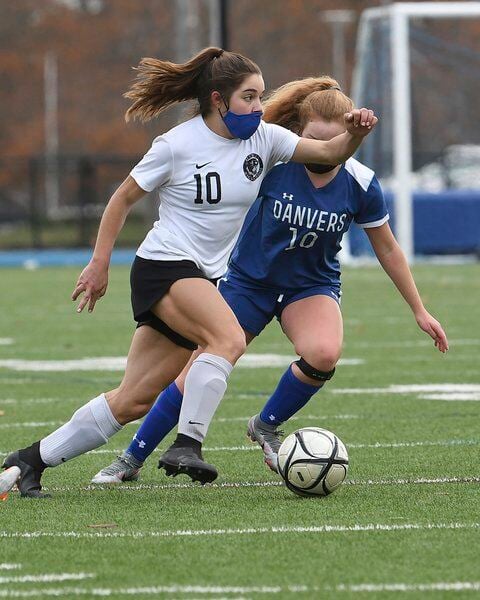 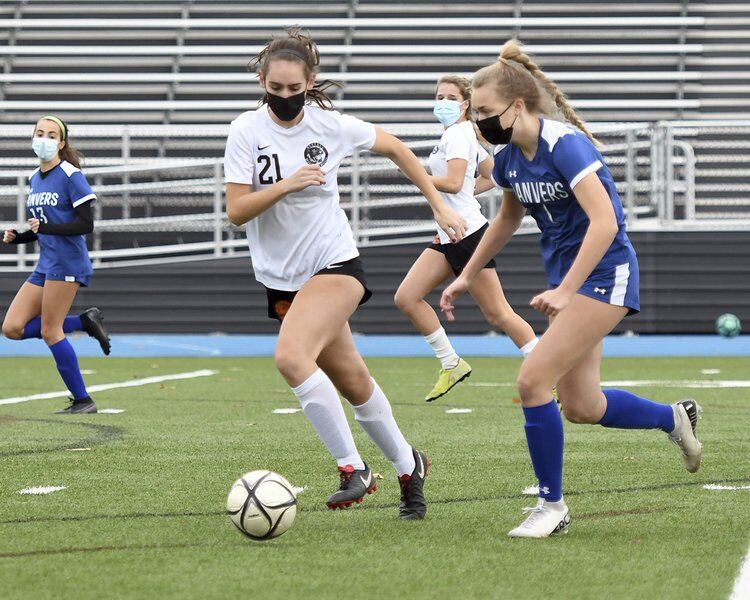 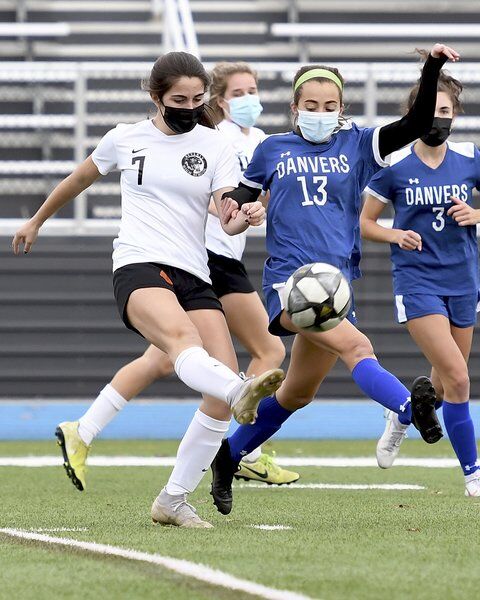 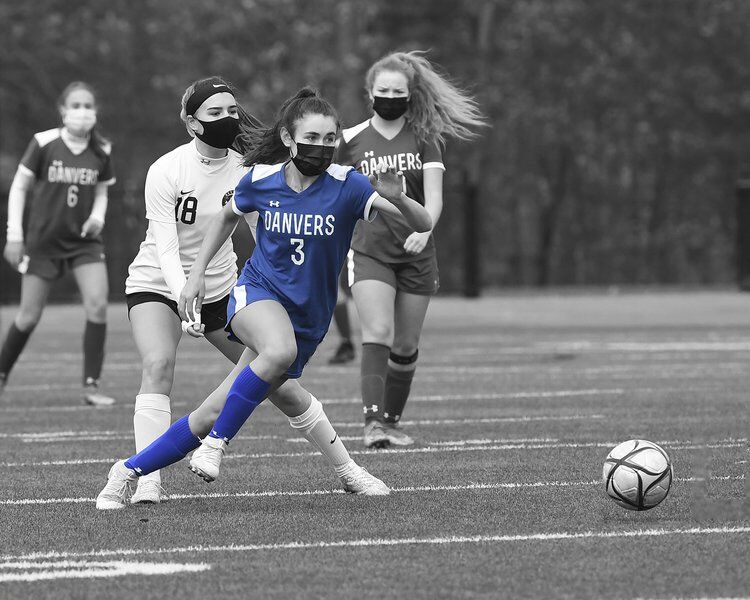 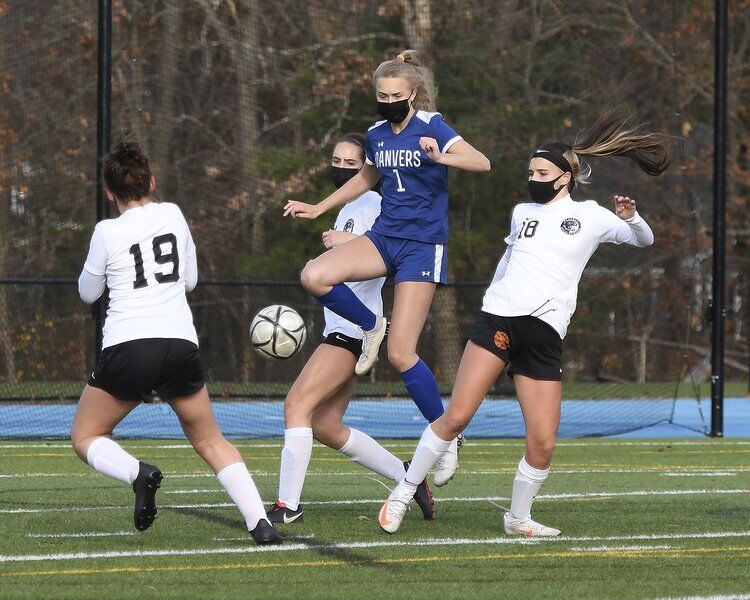 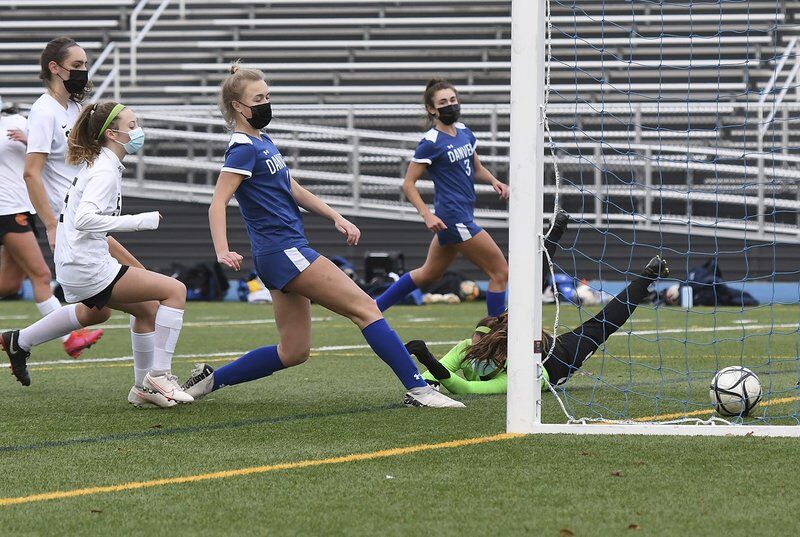 DANVERS — It seems like a bad idea to leave Danvers girls soccer star Arianna Bezanson with much green grass in front of her. The problem is Bezanson may be even more dangerous in tight spaces.

Weaving through some excellent Beverly defense with a mixture of dribbling, self-passing and athleticism that bordered on other-worldly, Bezanson netted all three goals to keep her Falcons perfect with a 3-0 win over the Panthers at Dr. Deering Stadium Saturday afternoon.

It was the the fourth hat trick of the year for Bezanson, who potted all three markers in the first half with assists from Reese Pszenny, Avery Scharffenberg and Mia Jordan.

"Arianna can run by you and if you sit back and there's a few defenders, she's confident and she has the ball skills to get through there too," said Danvers Jimmy Hinchion. "Her technical ability is amazing. She's a righty and she goes to that left foot unbelievably."

The Falcons improved to a spotless 10-0 on the year and are unbeaten in their last 25 regular season games going back to September of 2019. It was a thoroughly impressive performance Saturday in which Danvers dominated possession in the first half to the tune of an 11-0 edge in shots on goal (21-4 overall).

"This has turned into a really special team. When we're on we can possess the ball really well and to do that against a fantastic Beverly team says a lot," said Hinchion.

The Panthers (6-4) got another incredible performance in net from senior Sydney Anderson, who made 20 stops and stood in front of a few rockets from Bezanson, Pszenny and Riley DiGilio. Defensively, Beverly was positionally sound and got a nice lift from Kelsi DalBon.

"She's solid and she often falls under the radar. We were much better in the second half and I think a lot of it had to do with Kelsi," said Beverly coach Samantha Charest. "We gave up three goals and I thought we did a nice job cutting off the attack, forcing them to go to their non-preferred foot ... Danvers is that strong. They're a team that would contend for a state title if we had one."

While DiGilio and Bezanson pushed the ball forward for Danvers, Livvi Anderson, Julia Vaillancourt and Gabby Chisholm were excellent on the defensive end of things when Beverly threatened. Danvers keeper Holly DeAngelis earned her sixth shutout with a spotless effort.

Bezanson set the tone by opening the scoring in just the third minute of play. She doubled her team's lead at the mid-point of the second quarter and added another before halftime.

"We attacked well and Sydney (Anderson) made some really nice plays. Getting them early definitely helped a lot because a keep like her can get in your head," Hinchion said. "These girls wanted this one and they played really well. It's a fun group to coach."

Kayleigh Crowell, Samantha Carnevale and Sarah Hall did most of the creating up top when Beverly did get into scoring territory. The Panthers will look to end their season on a winning next week when they wrap things up against Saugus while Danvers hosts Peabody on Tuesday night.

"It wasn't our best game and I think it was an emotional game because these girls have been playing with and against each other since they were little kids," said Charest. "We're looking forward to hopefully ending the season on a high note next week."