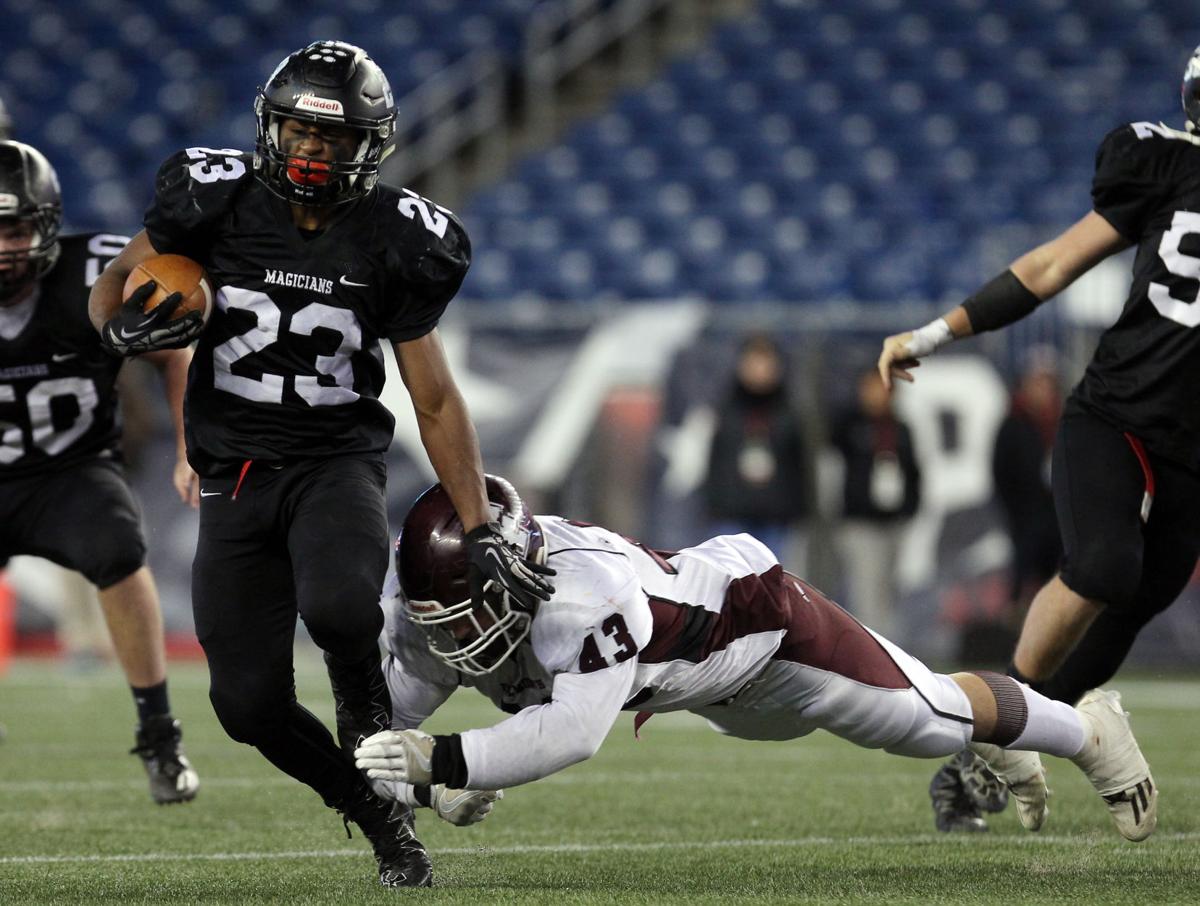 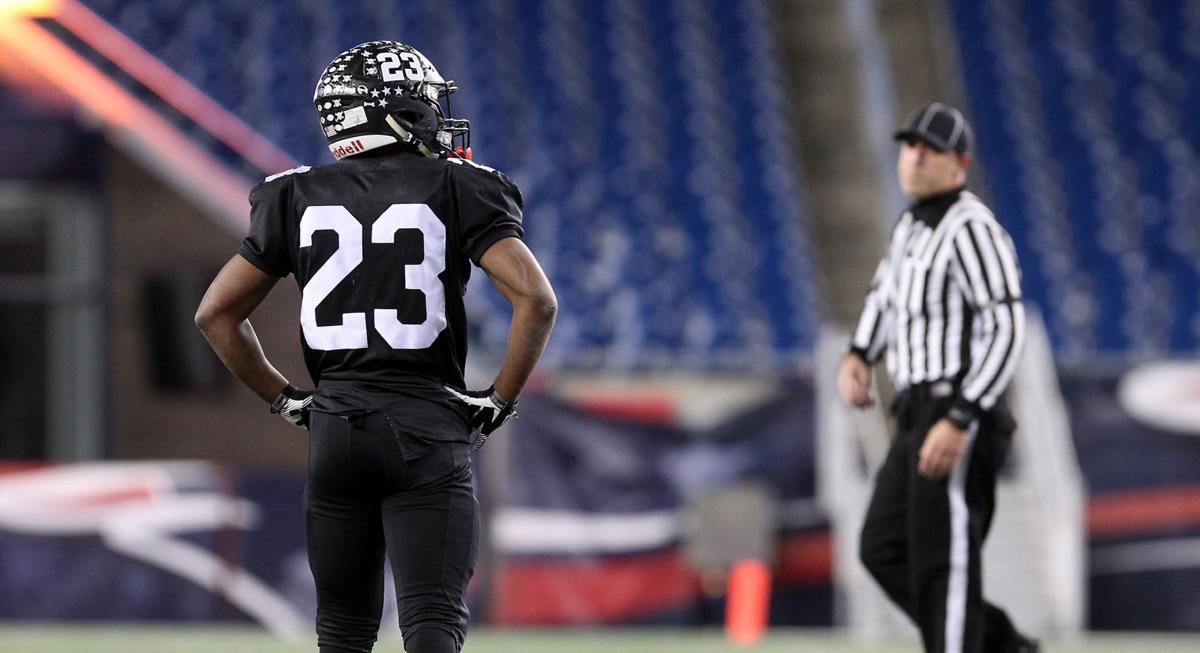 DAVID LE/Staff photo. Marblehead senior captain Jaason Lopez stands with his hands on his hips at the conclusion of the Magicians loss to Falmouth in the D2A State Championship. 12/3/16 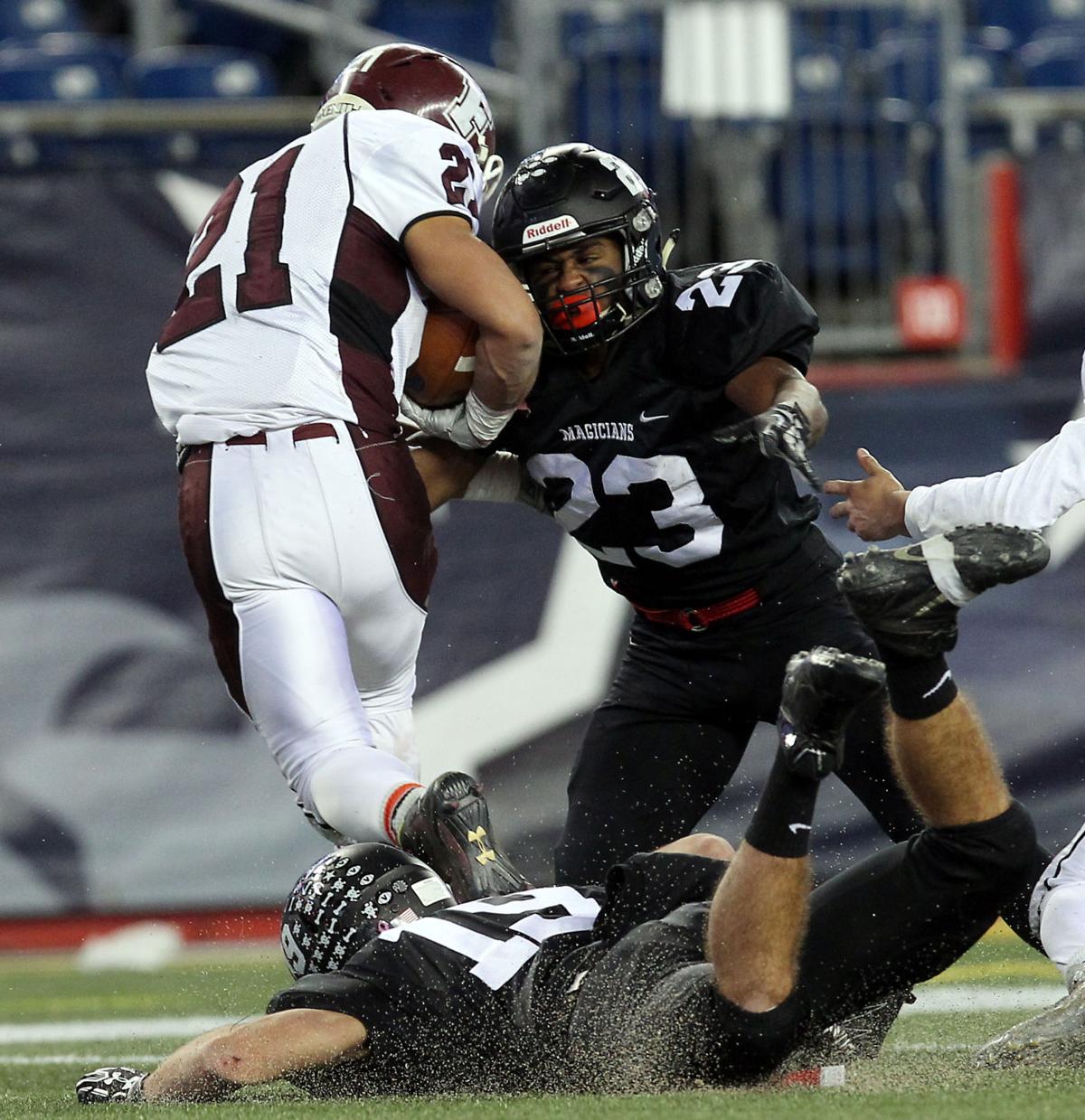 DAVID LE/Staff photo. Marblehead senior captain Jaason Lopez stands with his hands on his hips at the conclusion of the Magicians loss to Falmouth in the D2A State Championship. 12/3/16

FOXBOROUGH — All season, momentum seemed to flow for the Marblehead High football team the way a strong current flows through a riverbed.

Saturday in the Division 2A state championship game, the Magicians were instead stuck in the mud.

Falmouth High jumped all over Marblehead and controlled this battle of unbeatens throughout to win the D2A Super Bowl, 34-13, at Gillette Stadium.

"The kids played their hearts out. They did everything they possibly could," said Magicians head coach Jim Rudloff. "I think we played a better football team today."

Falmouth ran its triple option offense to near perfection. Spreading the ball around, they allowed fullback Gates Kelliher (95 yards, 3 touchdowns) to chew up yardage inside. On pitches, Michael LaFrange (79 yards) and Sam Koss (99 yards) proved impossible to contain in the second half.

For good measure, Clippers quarterback Nick Couhig mixed in enough downfield passing to keep the Magicians' defense off balance. He set the tone by hitting Jean Vasquez for a 33-yard touchdown on the game's first drive.

"We've been so good on the perimeter that teams usually have to bring safeties down to defend that," said Falmouth coach Derek Almeida. "We try to slow that down by throwing it deep."

Looking to get a big lead and force Marblehead to chase the game, Falmouth recovered an onsides kick after taking that 7-0 lead. Though Marblehead's defense got a stop on that possession, being on the sidelines for the first 6:30 of the game had the Magician offense out of sync.

"We weren't prepared to play as physically as they wanted to to play. It took about a quarter for us to wake up and that threw us off our game," said Rudloff.

Senior QB Drew Gally (12-of-20, 149 yards passing) hooked up with Derek Marino (12 yards) and Sam Paquette (16 yards) to get the Magicians inside Clipper territory on that first drive. Falmouth got successive stops on 3rd- and 4th-and-1 to end that threat, however, and soon led 14-0 on the first of Kelliher's three scores.

Though Marblehead got big games from linebacker Aidan Gillis (13 tackles) and end Bo Millett (9), Falmouth got the plays it needed to move the chains and chew up both yardage and the clock. When Marblehead seemed to have the dives covered, Couhig pitched; when Marblehead seemed prepared for the outside runs, he gave to a fullback who rammed it up the middle.

"They stuck with their front and they played it well. Their linebackers are tough and their defensive tackles are tough," said Almeida. "Fortunately, with our offense we don't have to block all those kids. We put it in (our QB's) hands and trust him to make the proper decisions."

Falmouth also executed a bit of a hairpin turn in the third quarter. Leading 14-0, they forced Marblehead to go three-and-out to begin the second half. Sam Paquette's punt (he averaged 46.3 yards on three punts) pinned the Clippers at their own 5-yard line, but Falmouth responded by going 95 yards in 13 plays to take a commanding 21-0 lead.

"It's a form of assignment football against that offense and if you miss assignments, you're in trouble," said Rudloff. "They had too much success on the tosses outside. We spent the week trying to take that away and we couldn't get our safeties downhill to stop them."

Marblehead used its up-tempo offense to get off the mat in the third, with Gally needing only four plays to find Manning Sears for a 27-yard touchdown with 2:17 left in the quarter.

Needing the ball back to do it again, Falmouth instead went on another long march capped by a Kelliher touchdown to go ahead 27-6.

"There's not much we can do when we don't have the ball," said Rudloff, whose team held the ball for only 5:08 in the second half compared to 14:52 for Falmouth.

Gally stayed in rhythm on the next drive, finding senior end Justin Faia for a big gain and hitting Paquette up the sidelines for 19 more yards. He hit junior Derek Marino for an 8-yard TD with 5:07 on the clock to make it 27-13.

The Magicians then attempted an onside kick, which was initially recovered by sophomore Devin Romain. Marblehead was flagged for being offsides, though, and Falmouth covered their re-kick.

"The penalty on that onside kick killed us," Rudloff said. "Between the slow start and that penalty, there were just too many mistakes."

Kelliher broke free for a 43-yard TD with 4:08 to go and Couhig came down with an interception with 2:42 left to seal the championship for Falmouth.

The Clipper defense, the only team to hold Marblehead under 27 points all season, was exceptional. They limited the typically explosive Jaason Lopez to 33 yards on 10 jaunts, and a total of only 68 rushing yards as a team.

"We've focused on stopping the run all year," said Almeida. "Our guys were in the right gaps and in the right spots. Coming into the game, we'd hoped we'd get enough stops to stay out in front."

Falling at Gillette for the second time in school history (including 2009), Marblehead graduates 18 seniors that made a major impact on Magician gridiron history. Their 11 wins are a school record, they snared a fourth straight Northeastern Conference North title and they won the program's first North sectional championship.

"The kids played hard. They played tough," said Rudloff. "It just seemed like early in the game, they were at one speed and we were at a different speed."

Photo slideshow from Marblehead High's 34-13 loss to Falmouth in the Division 2A Super Bowl at Gillette Stadium.

Phil Stacey column: For Marblehead, no shame in losing to club as strong as Falmouth

FOXBOROUGH — It was a pain worse than most, if not all, of them had ever felt before.