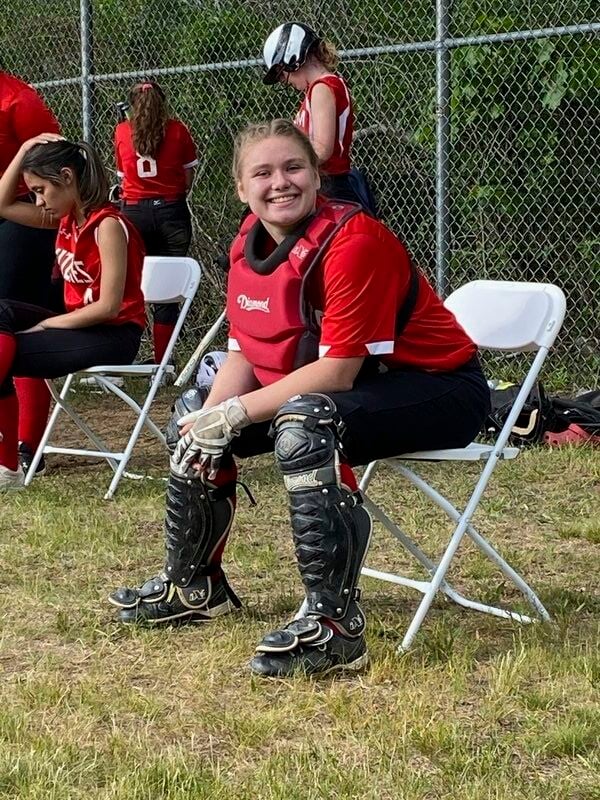 Junior captain Cassadi O'Leary has moved behind the plate from shortstop, where she began the season for Salem High. Courtesy photo 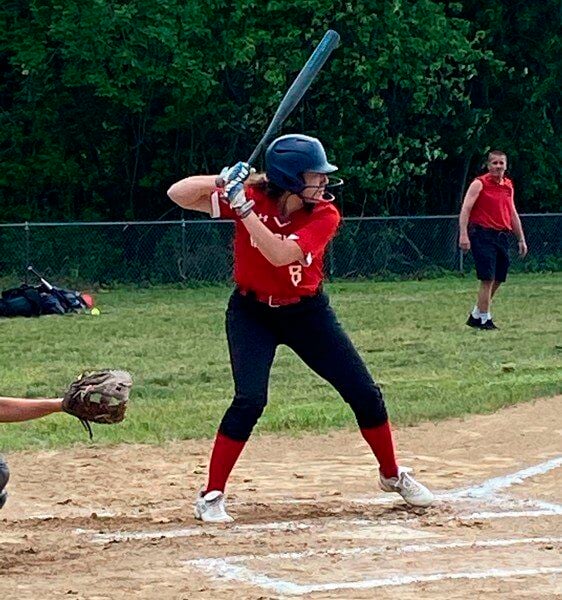 Courtesy photos the team’s cleanup hitter and ace pitcher, Salem High senior captain Christin Napierkowski is a force to be reckoned with on the softball diamond. 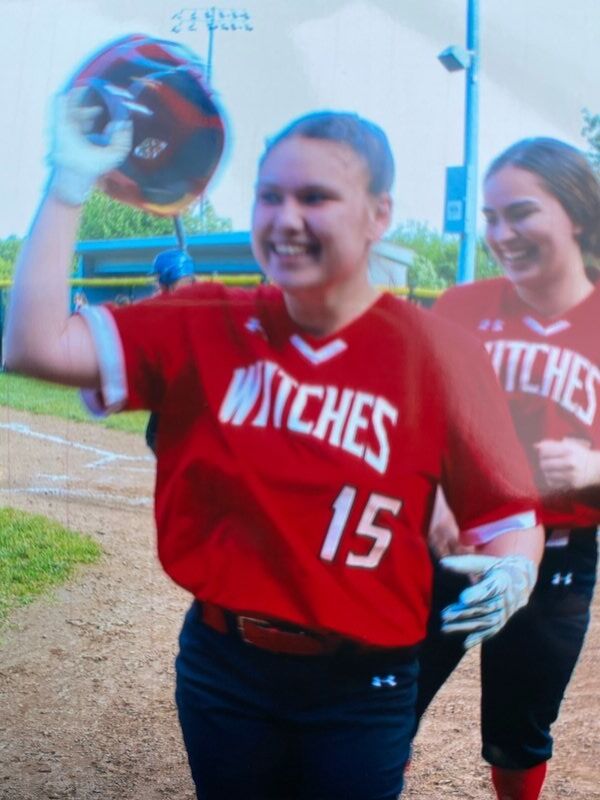 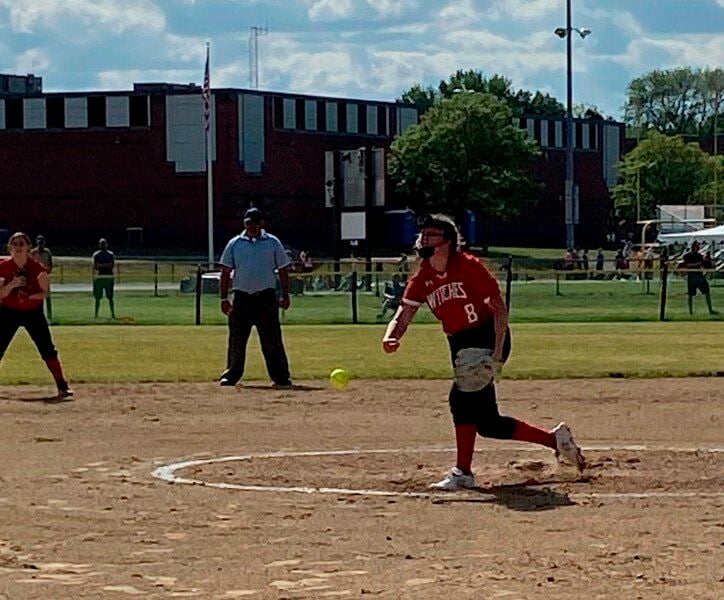 Christin Napierkowski has struck out 68 batters in just 37 innings for the Witches this spring. Courtesy photo 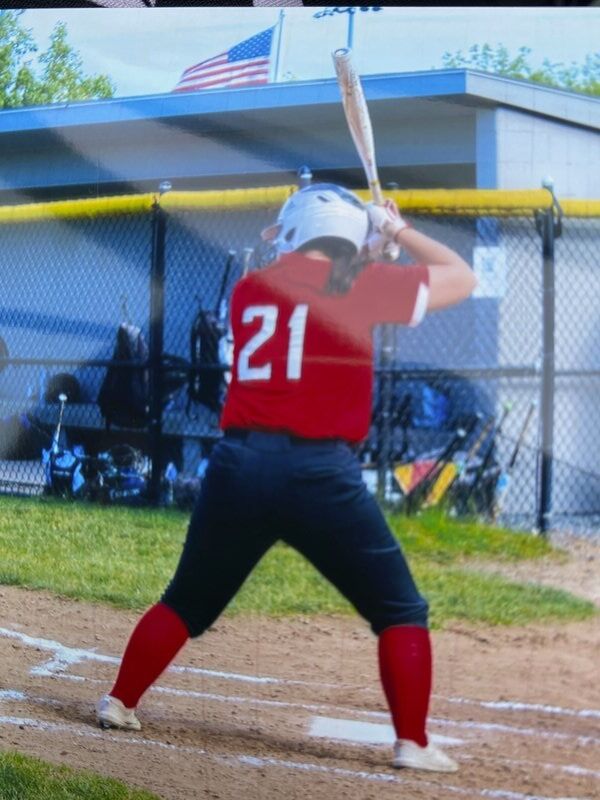 Freshman slugger Skylar Sverker is hitting .392 with 10 runs scored and 10 RBI for the Witches this spring. Courtesy photo

To say that the Salem High softball season has been a bit unorthodox would be putting it mildly.

All four of the Witches’ victories have come via the 12-run mercy rule ... but so have five of their six losses. They were without the services of one of the Northeastern Conference’s best pitchers, who also happens to be the senior class valedictorian, because she was taking some of her seven AP exams. They have a half-dozen players who didn’t begin the season with the program — all of them eighth graders, including three who start in the middle infield. And their starting shortstop and best hitter has since moved behind the plate to catch.

It’s been an interesting spring for the Witches if nothing else. But winners of three of their last four, they’re hoping to finish the final two weeks of the regular season on a strong note as they prepare for the state playoffs mid-month.

“Things are really starting to come together for us. I think a lot of that has to do with our team unity,” said j17-year-old junior catcher and captain Cassadi O’Leary. “Everyone gets along and enjoys being at the field, which is such a huge part of it. If you want to be there, that means you’re going to work hard towards a common goal while you are.”

“I have really high hopes for the end of the season,” said Napierkowski, who will be recognized for finishing at the top of her class when Salem High holds its graduation ceremonies tonight. “We’ve been getting better and better; the last few games have been a complete reversal from earlier in the season.”

Third-year head coach Rick O’Leary admits “it’s been a really crazy year”, but he too feels the Witches still have their best playing days ahead of them. Recent triumphs over Swampscott, Salem Academy and Lynn English have shown what the squad is capable of.

“We’ve got Beverly (Monday), Saugus, Winthrop, Salem Academy and Marblehead on Senior Night at Mack Park (June 14) left to play, and I feel we can be competitive and play with any of them,” he said. “Since we first played teams like Saugus and Winthrop, we’ve got a whole new infield, our pitcher is back and my daughter is behind the plate. If we can cut down on our errors and giving away runs, as what happened in some of our losses, I think we can be right there.

“We’ve opted to play in the state tournament, too; we gave the kids the vote and it was pretty much unanimous that they wanted in. I’d be nice to do so on a little winning streak, then knock off a team or two in the playoffs.”

With just 19 players in the program, Salem can’t afford lapses either in the field or at the plate. The starting nine they’re currently fielding appears to give them the best chance of avoiding such mishaps.

It starts on the hill with Napierkowski, who’ll continue her craft at the University of Rochester this fall. In just 37 innings this season she’s already piled up 68 strikeouts and accumulated all four of the Witches’ victories, using an array of pitches — rise, drop, changeup, curveball, screwball and even the occasional fastball — by mixing them on both the inside and outside corner of the plate.

“Rarely do I throw it over the middle, because at the college level that’s simply not an option,” said Napierkowski. “So I try my best to paint the corners.

“I can usually tell in the first inning if I’m ‘on’ that day or not. But honestly as far as feeling good, I’ve pitched hundreds of games in my life and I felt good in about three of them,” she added with a half-chuckle. “Pitchers are characteristically perfectionists ... and I definitely am. I always have things I can improve upon or simply do better.”

“I’ve known Christin since our Salem Little League days and we have a really good relationship,” added Cassadi O’Leary. “We’re really on the same wavelength most of the time in terms of calling pitches. She knows how to hit those spots and throw batters off.”

Napierkowski, who had to miss some games and practices in order to take AP exams in Physics 2, Literature, Macroeconomics, Microeconomics, Music Theory and U.S. Government (“I was bummed out I had to miss softball, but I have a lot of games and only once chance to take these tests”), has also been getting it done at the plate with a pair of home runs and double digit RBI.

O’Leary, the coach’s daughter, is one of the Northeastern Conference’s best hitters with a .531 average. The club’s No. 3 hitter in front of Napierkowski, she’s scored 15 runs, knocked in 16, and two of her 17 hits have left the yard.

“I’ve been working on my hitting, keeping my head down, getting the right pitch and swinging hard,” she said. “One of my dreams as a kid was to hit one out of Mack Park, and when I did it this year (against Salem Academy), I couldn’t stop smiling as I ran the bases.”

“A pitcher is nothing without her catcher,” added Napierkowski. “Cassadi does a great game behind the plate and with her bat.”

A basketball and volleyball player at Salem High as well, O’Leary also serves as the softball team’s emotional and vocal leader. “I like to keep everyone’s heads up and involved in the game,” she said. “Helping team morale whenever possible, I feel like, is only going to help us.”

With a strong throwing arm and the potential for power at the plate out of the 6-spot, junior Autumn Cook is the team’s third basemen. To her left are three freshmen starters: Skylar Sverker at first base, Faith Santos-Schrader at second, and Ella Wasserman manning shortstop.

“I had been moving Ella around the field a bit, but now she’s cemented at short,” said Rick O’Leary of his team’s leadoff hitter. “She has a good arm, is fast and we have a lot of confidence in her.

“She’s improved so much with both her fielding and her hitting,” added Cassadi O’Leary, who actually coaches some of her eighth grade teammates on an AAU U-14 squad. “Ella’s really done a nice job for us.”

Santos-Schrader slots in second in the batting order with a combination of speed, power and ability to spray the ball. She’s batting .421 (8-for-19) with 14 runs scored and has been smooth in the field.

“I’ve been very impressed by Faith, especially for an eighth grader. She’s so athletic,” Napierkowski said. “Her fielding and athleticism are terrific.”

Sverker, who has pitched when Napierkowski hasn’t been available and can also play across the diamond at third, is more than capable in the batter’s box as well. Thus far she’s hitting .392 (11-for-28) with 10 runs scored and 10 RBI.

Another freshman, Heather Bernard, is “knocking on the door” according to Rick O’Leary in terms of forcing her way into more playing time. She does whatever is asked of her, said the coach, and can play anywhere in the infield or outfield. Eighth grade outfielder Barbara Rowley has only played one year of softball but has improved dramatically since the start of the season, he added.

“I can see our hard work paying off now,” Cassadi O’Leary observed. “Our infield play, our outfield play, our hitting ... it’s all getting better. It really helps that we don’t practice lightly, either; we go after it hard. We’re such a different team now than we were earlier on.

“The fact that everyone gets along so well makes it all that much better,” she added. “It just makes you want to do better for the entire team. That helps so much.”

Fast Pitches, a column on North Shore high school softball, appears each Friday during the spring sports season in The Salem News. Contact Executive Sports Editor Phil Stacey at pstacey@salemnews.com and follow him on Twitter @PhilStacey_SN