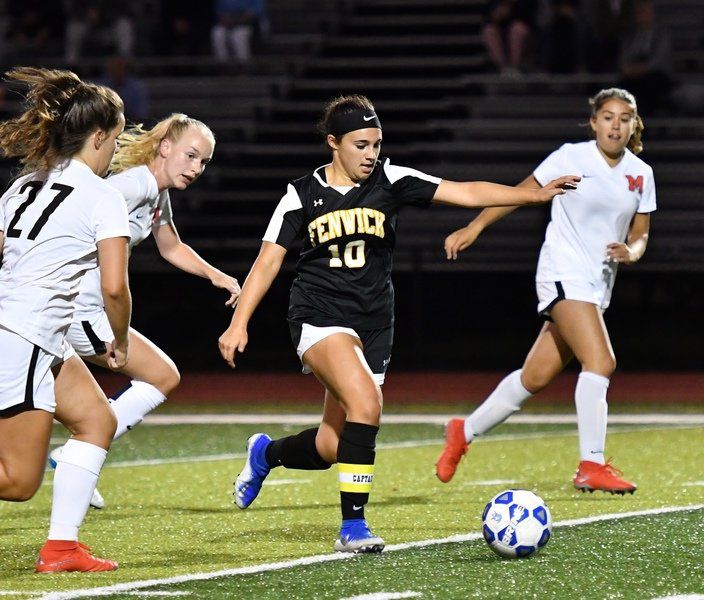 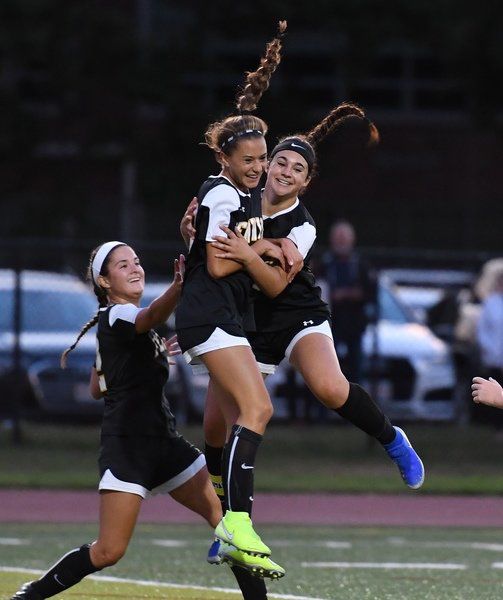 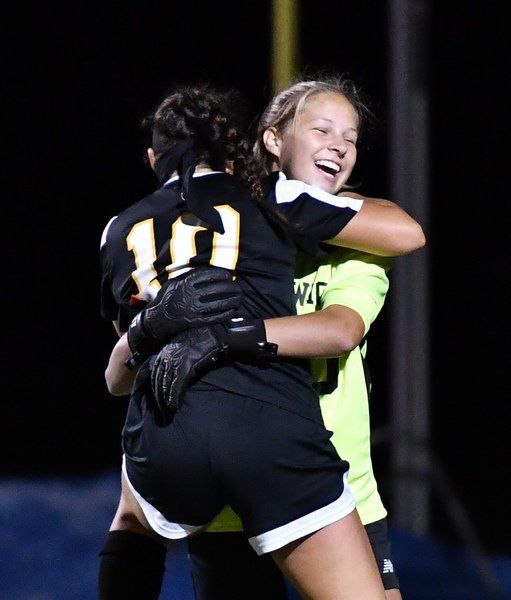 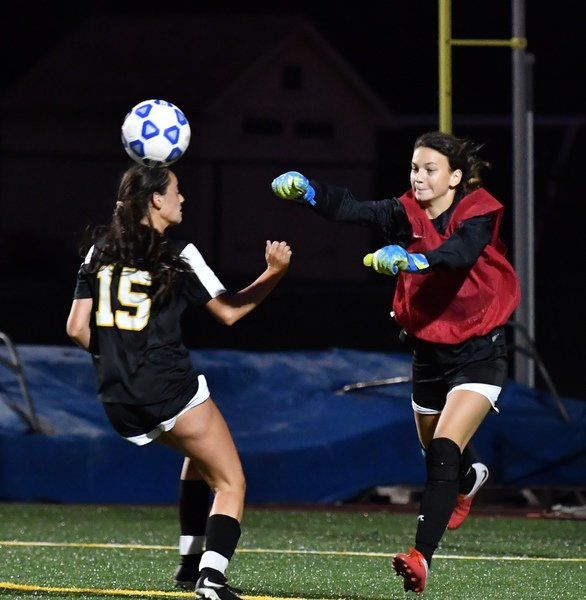 Bishop Fenwick's Madison Csogi tries to head the ball out of the reach of Marblehead keeper Lauren Podgur. Csogi had a goal in the 2-0 victory. Rose Raymond photo 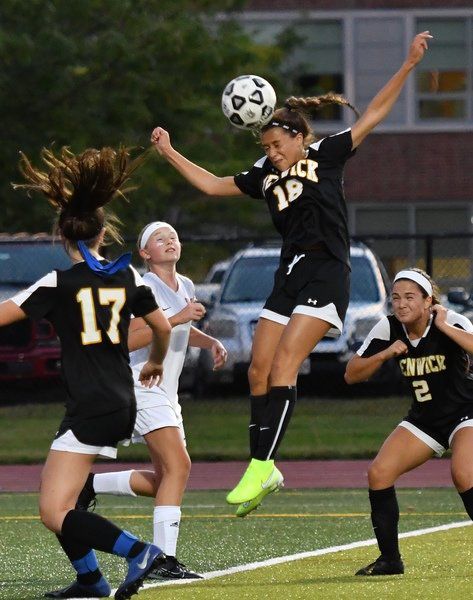 Isabella DelVecchio (18) heads the ball into the net for one of her team's goals in the 2-0 win over Marblehead on Thursday. Rose Raymond photo 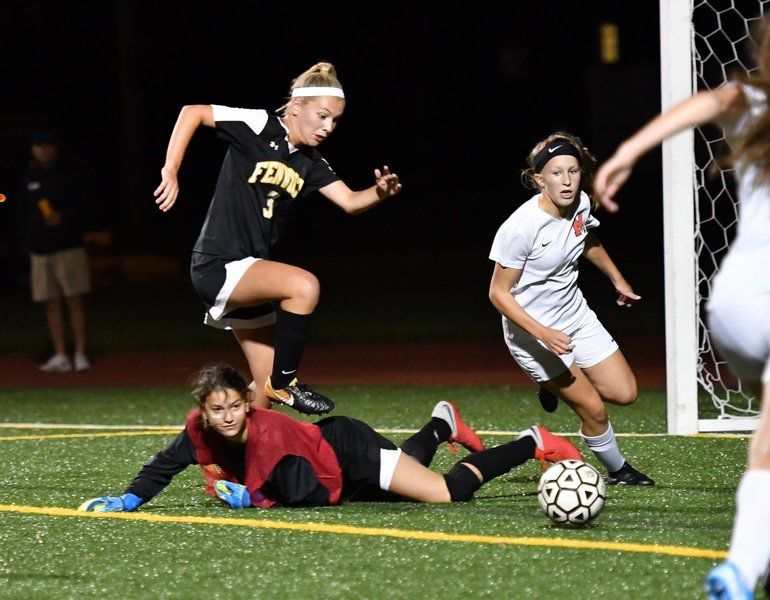 Fenwick’s Katelyn Clark tries to leap over Marblehead keeper Lauren Podgur with the ball loose just in front of the cage. 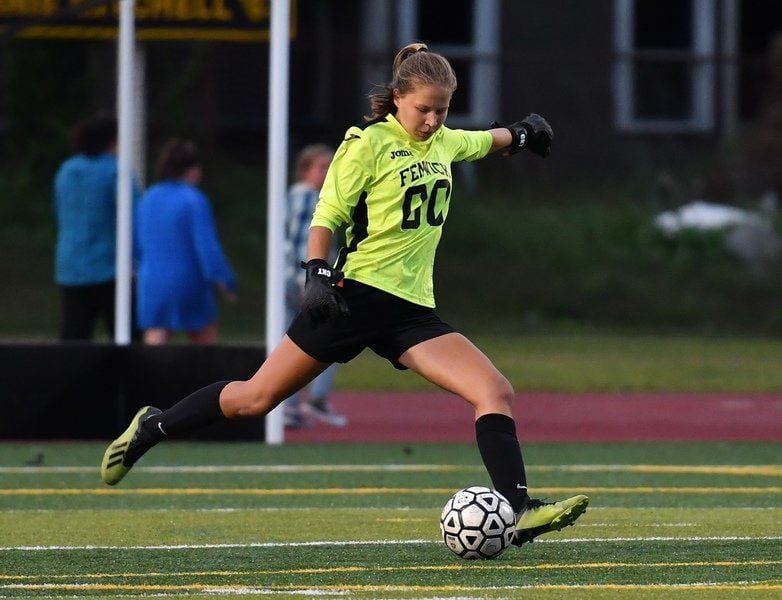 Bishop Fenwick's Madison Csogi tries to head the ball out of the reach of Marblehead keeper Lauren Podgur. Csogi had a goal in the 2-0 victory. Rose Raymond photo

Isabella DelVecchio (18) heads the ball into the net for one of her team's goals in the 2-0 win over Marblehead on Thursday. Rose Raymond photo

Fenwick’s Katelyn Clark tries to leap over Marblehead keeper Lauren Podgur with the ball loose just in front of the cage.

PEABODY — The Bishop Fenwick girls soccer team began a new era Thursday night in Peabody, and after one game it appears they’re moving in the right direction.

Fresh off a trip to last fall’s Division 3 North title game, the new-look Crusaders picked up where they left off with a 2-0 win over visiting Marblehead under the lights at Donaldson Field. It wasn’t perfect, but Steve Flaherty’s group did more than enough to get the win.

“But it was a good start overall,” he continued. “First game of the season we’re still kind of rusty and we’re a young team, we graduated 10 seniors. But I’m happy with the result and it’s good to get a win in the first game no doubt.”

Both Fenwick goals came in the opening half of action as Isabella Delvecchio, who also added an assist, and Madison Csogi each cashed in early. The Crusaders were pushing the tempo early and often which led to some nice crosses and opportunities in front of Marblehead keeper Lauren Podgur.

“It was pure hustle by my strikers,” said Flaherty. “They’re positioning on the cross was excellent and that’s the reason they got the goals because all they had to do was tap it in. I think at the end of the day if you’re in the right place at the right time the results will come after.”

Mia Tsaparlis’ textbook cross led one of the Fenwick goals, while Jenna Durkin added an assist.

But as the first half game clock began winding down it appeared the Magicians began to breathe new life. From there, it was a more evenly matched, up and down contest between the out-of-conference foes.

Sandwiched in between a near goal from Fenwick’s Alison Mitchell that ricocheted off the cross bar, Marblehead had a few chances to cut the deficit in half. Among them was a great cross-to-header connection between Emma Robinson and Carter Murray, but the attempt was gobbled up by Fenwick’s sophomore keeper Claudia Keith.

First-year Marblehead head coach John Dormer implemented a three-back formation to try and generate more offense after the break, and at times it worked wonders. But their overall youth and inexperience at the varsity level proved too much against a quality opponent on the road.

“We’re definitely progressing,” said Dormer, his team now 0-2 on the year. “(Fenwick) is a really good team, a well coached team, and it’s going to take our girls some time to adjust to that type of play. At the end I think I had three freshman and four sophomores on the field so we’re getting there, it’s just going to take a little time.”

Dormer highlighted the play of Annika Haley and Murray up front, as well as Jillian Witney and Anna Rigby in the middle. They’re a young team, but there’s plenty of potential across the board for Marblehead to turn things around as the campaign rolls on.

As for Fenwick, senior captains Katelyn Clark and Isabella Fabbo had standout games.