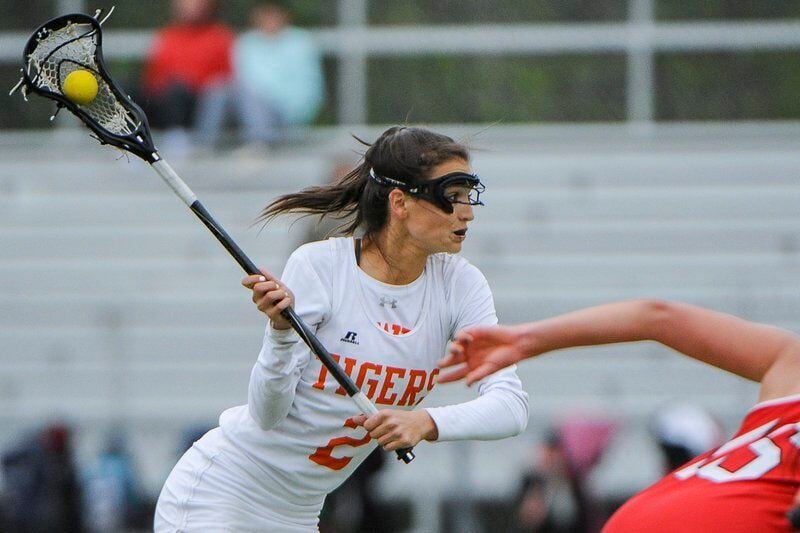 JAIME CAMPOS/Staff photoIpswich’s Riley Daly has been terrific for the 7-1 Tigers this season. 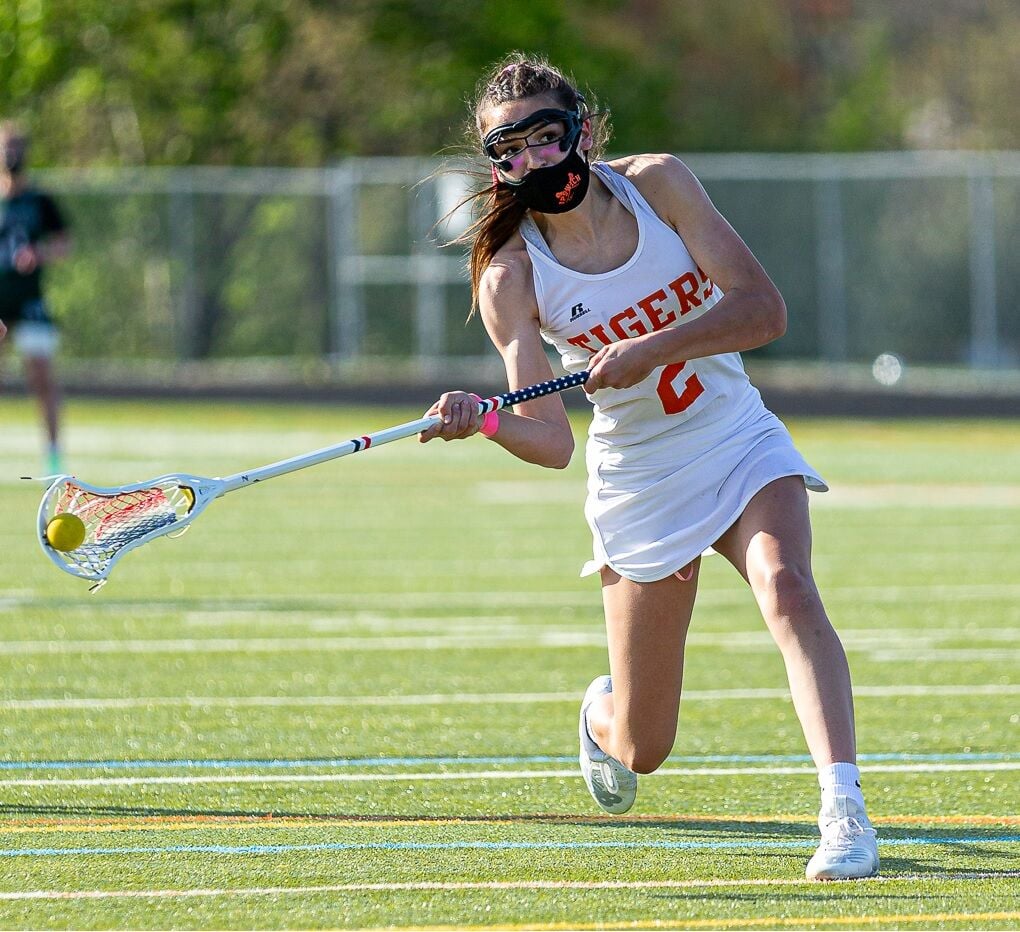 Timothy Cardew/photo. Ipswich's Riley Daly has turned in a tremendous season thus far for the 7-1 Tigers. 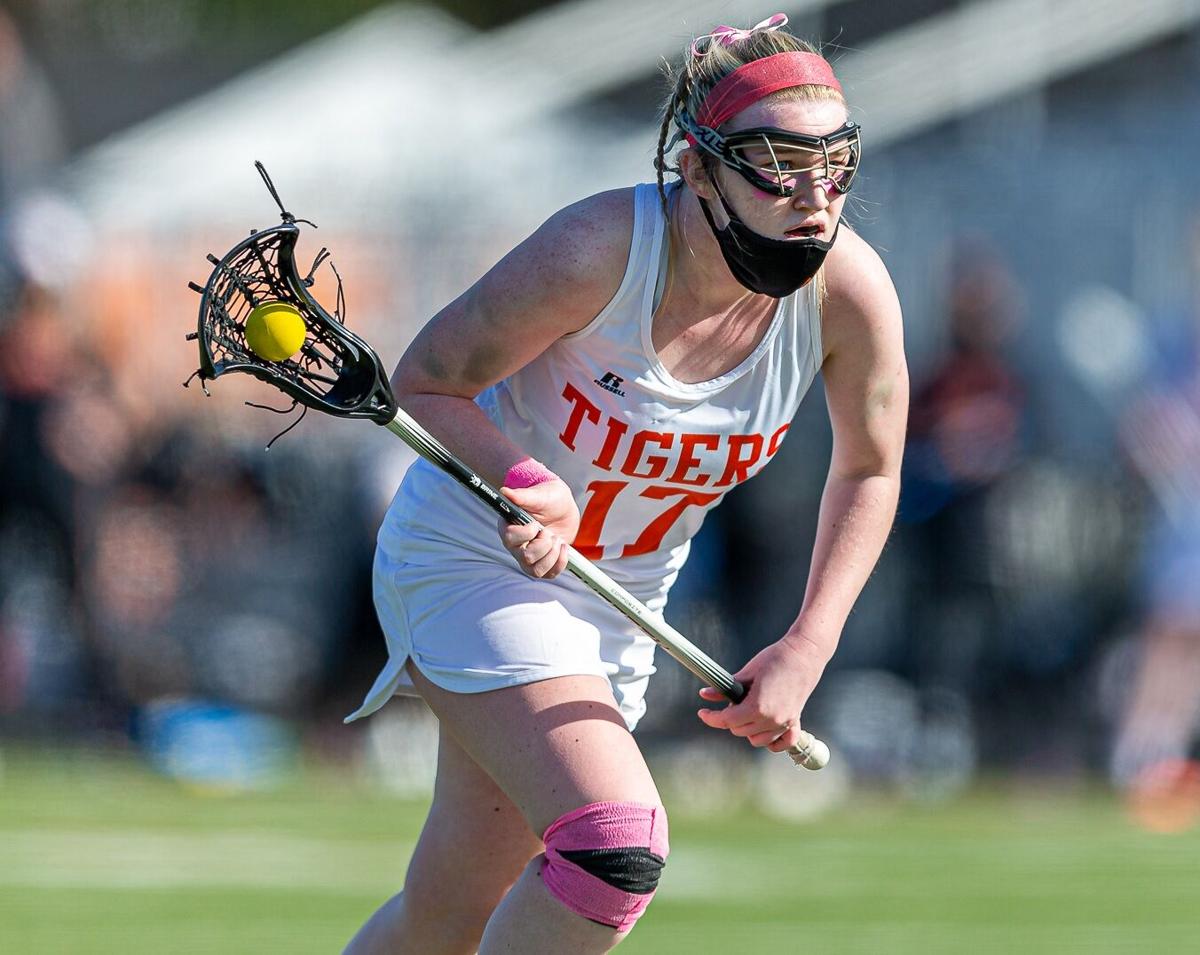 Timothy Cardew/photo. Ipswich’s Cayla Greenleaf is closing in on 100 career goals for the Tigers.

JAIME CAMPOS/Staff photoIpswich’s Riley Daly has been terrific for the 7-1 Tigers this season.

Timothy Cardew/photo. Ipswich's Riley Daly has turned in a tremendous season thus far for the 7-1 Tigers.

Timothy Cardew/photo. Ipswich’s Cayla Greenleaf is closing in on 100 career goals for the Tigers.

Considering all the girls lacrosse powerhouses in the Northeastern Conference this year, it’s easy to overlook what’s going on in the Cape Ann League.

But truth be told, there’s been some excellent competition there as well, and one local team sits above all in the Baker Division standings.

That squad is Ipswich, and if their recent play is any indication of what’s to come down the stretch, the rest of Division 2 North better gear up.

As it stands, the Tigers hold a 7-1 record and are six points ahead of second-place Manchester Essex in the Baker standings. Only unbeaten Newburyport (7-0), which handed Ipswich its only loss of the spring, holds a better record overall.

With over 10 seniors slated to be on the roster last spring before the campaign was wiped away due to COVID, Ipswich came into 2021 with a new-look group eager to prove they could still compete at an extremely high level. So far, they haven’t disappointed.

One of those fourth-year leaders is Cayla Greenleaf, another is Riley Daly. Collectively, the dynamic duo has formed a frighteningly consistent and reliable attack that’s had Ipswich’s offense flying high.

Greenleaf sits just four goals away from 100 for her career, and with three regular season games remaining, she’ll likely hit that mark this week.

“It feels pretty great,” said Greenleaf. “I’m just going to work my hardest to get to that 100.”

While the goal scoring certainly shines brightest (Greenleaf leads the team with 31 markers this season while Daly is second with 19), it’s been the Tigers’ passing that’s allowed them to excel. They’ve focused on moving the ball with efficiency in order to maintain possession for longer spells, something that’s certainly paid dividends in recent outings.

“Our biggest thing is definitely sharing the prize,” Daly said of her team’s willingness to pass the rock for the better shot. “It’s hard to see sometimes because we obviously have leading scorers like Cayla and I, but it’s important for us to get everybody a goal and everybody involved.

Since its loss to Newburyport on Friday, May 14 (a disappointing 20-6 setback), Ipswich has earned convincing wins over North Reading (13-2), Pentucket (13-6), Lynnfield (16-3) and Hamilton-Wenham (16-3). Daly and Greenleaf feel their group is really starting to fire on all cylinders, and would welcome another crack at the unbeaten Clippers in the upcoming state tournament.

“When we played Newburyport we had like five games right before it and we were a little gassed,” she added. “Our chemistry was kind of off, something was off with us and now we’ve just gone uphill ever since. It’s been really, really good.”

In addition to the stellar production from both Daly and Greenleaf, Ipswich has gotten plenty of help from girls like Bree Ring, Estelle Gromko, Kayden Flather, Sarah Lombard and Halle Greenleaf, to name a few. Defensively, goalie Ashton Flather has made 54 saves and continues to be a leader from the back, while Claire O’Flynn, Sam Orroth, Lexi Wright and Ava Horsman have all done their part.

But it all goes back to the seniors and their tremendous leadership abilities; that’s what will carry this talented team to the promised land and they wouldn’t have it any other way.

“They’re incredible. Their intensity is awesome, they start practice before I can even get out there sometimes and they lead by example on and off the field keeping us really focused,” Tivnan said of her five seniors Daly, Greenleaf, Lombard, Orroth and Ring. “It totally starts with them.”

Ipswich will wrap up the regular season this week with road tilts at Georgetown (Tuesday, 3:45), Triton (Thursday, 4:30) and Manchester Essex (Saturday, 10 a.m.).

Despite a competitive setback to new league power Masconomet last Thursday, Marblehead is quietly putting together another fantastic regular season. The Magicians sit at 6-3 thus far with three games to play, and they’ve been getting some phenomenal play from Maddie Erskine.

The senior captain has pumped in a team-best 34 goals and 15 assists just nine games and boasts a .756 shot percentage. Erskine has also collected a team-best 16 ground balls and has won 36 draw controls, also tops on the team. Sophomore Sydney Langton has been spectacular as well, scoring 12 goals with eight assists while scooping 12 ground balls and securing 16 draws. Defensively, senior Elizabeth Driscoll has been super steady in net, making 100 stops with a save percentage of .769.

Marblehead will be tested mightily down the stretch with matchups against Peabody and Swampscott before embarking on another tournament run.

Regardless of its win-loss record, Beverly has battled hard this spring and continues to improve every step of the way. One particular newcomer, freshman Lauren Caley, has made significant strides of late in helping her team on the offensive end. Caley is up to 11 goals and nine assists on the season and drew praise from her coach, Courtney McKallagat.

“Lauren has really gained a lot of confidence in our last few games,” said McKallagat. “She has done a nice job on the draw for us all year but is finally finding her groove in the attacking end. She wants to improve and wants to make her teammates better. She plays quickly and looks to be the spark to get our team going. Her knowledge of the game and passion for the sport is evident in her play.”

Congratulations to Peabody senior standout Hailee Lomasney, who officially recorded her 200th career point last week in a win over Beverly. Lomasney did so in impressive fashion, dropping in four goals and five assists to help the Tanners thump Beverly, 16-2, and improve to 7-3 in the process.

Lomasney has now scored a team-high 39 goals and dished out 24 assists (63 points) this season and currently sits at 203 points for her career.

Quick Sticks is a high school girls lacrosse column that appears in The Salem News every Monday during the spring season. Contact staff writer Nick Giannino at Ngiannino@salemnews.com and follow him on Twitter @NickGiannino_SN.