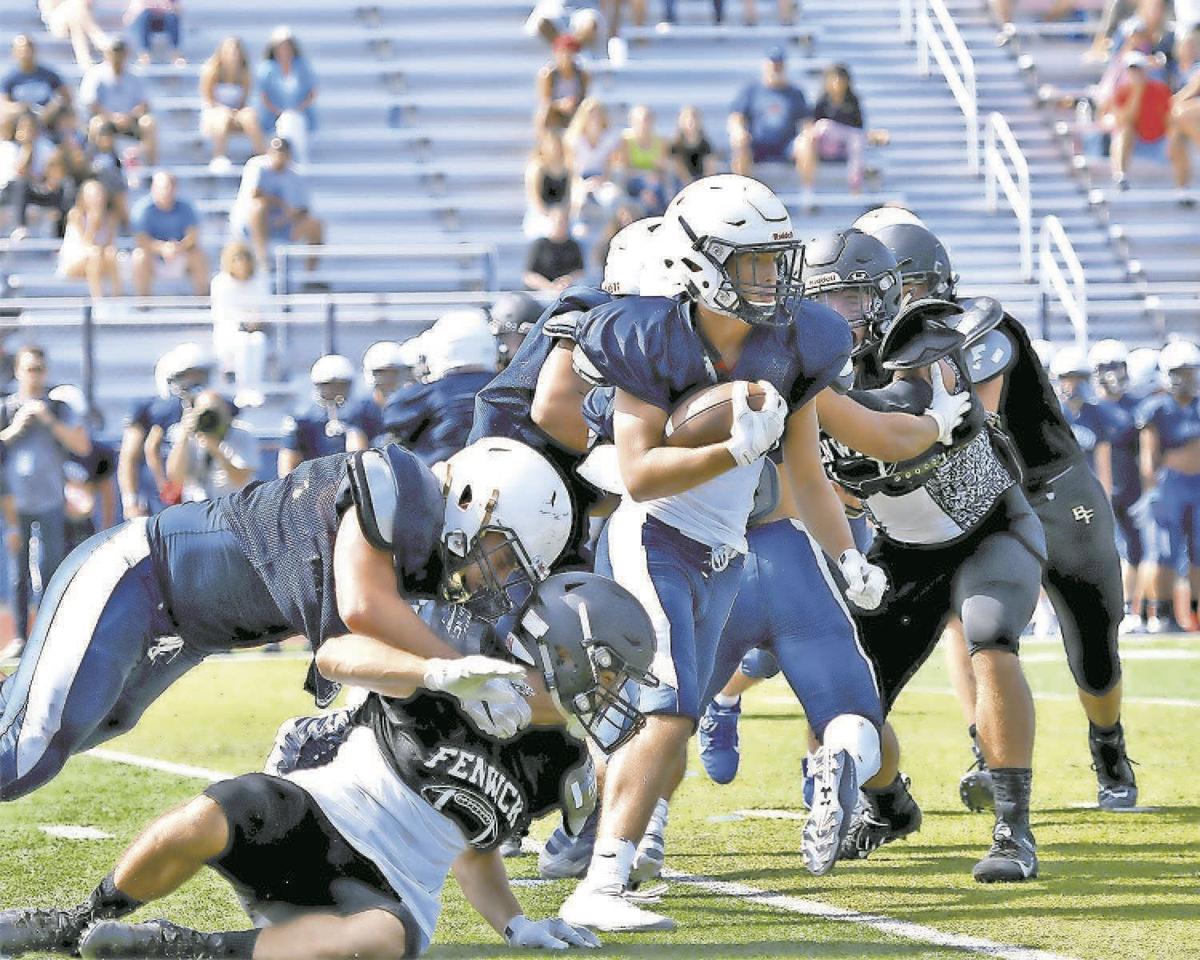 Senior captain Colby Therrien was one of the Tanners' leading scorers last year and can do damage at both running back and wide receiver. 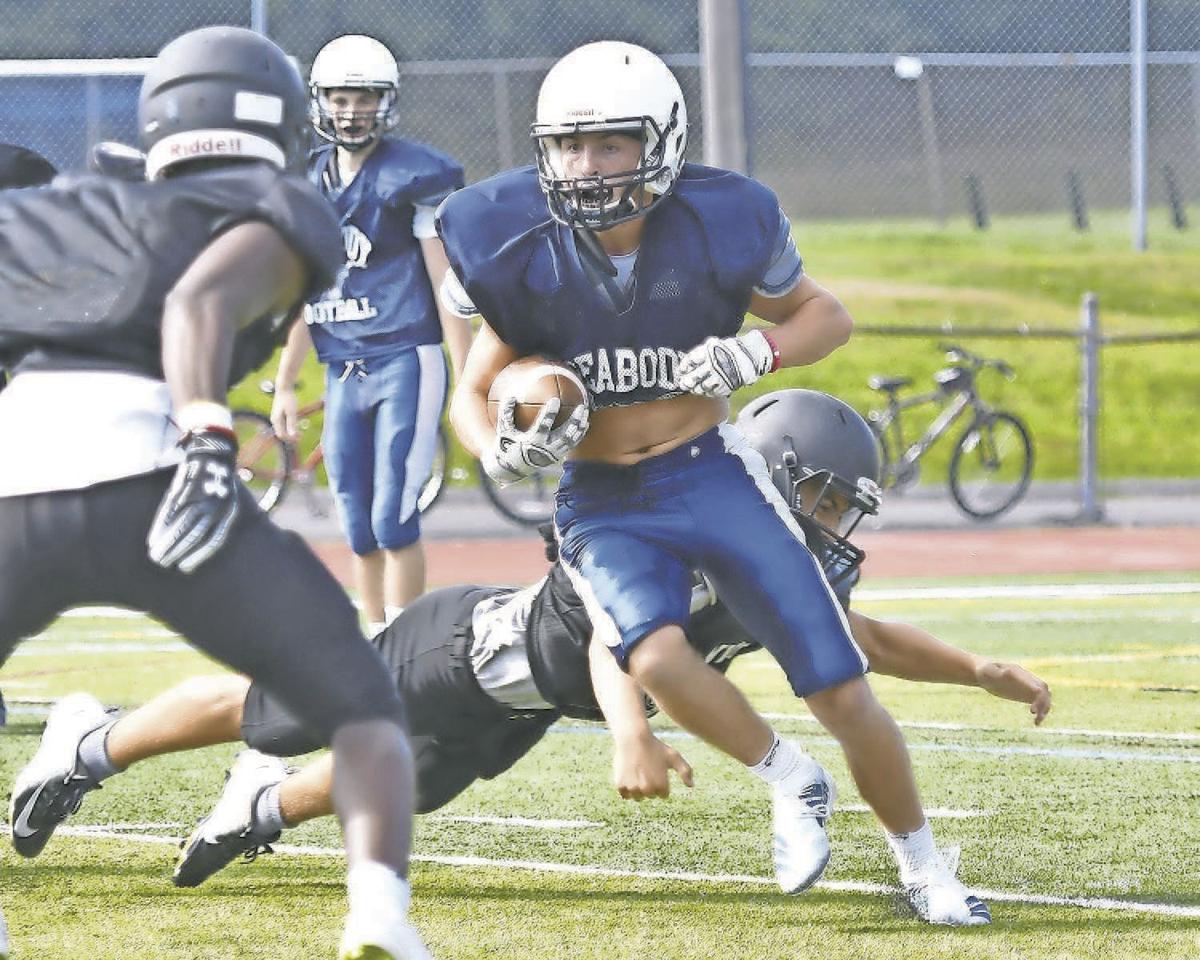 Junior Nick Vecchio is one of a host of talented skills players Peabody High hopes to draw on this fall. 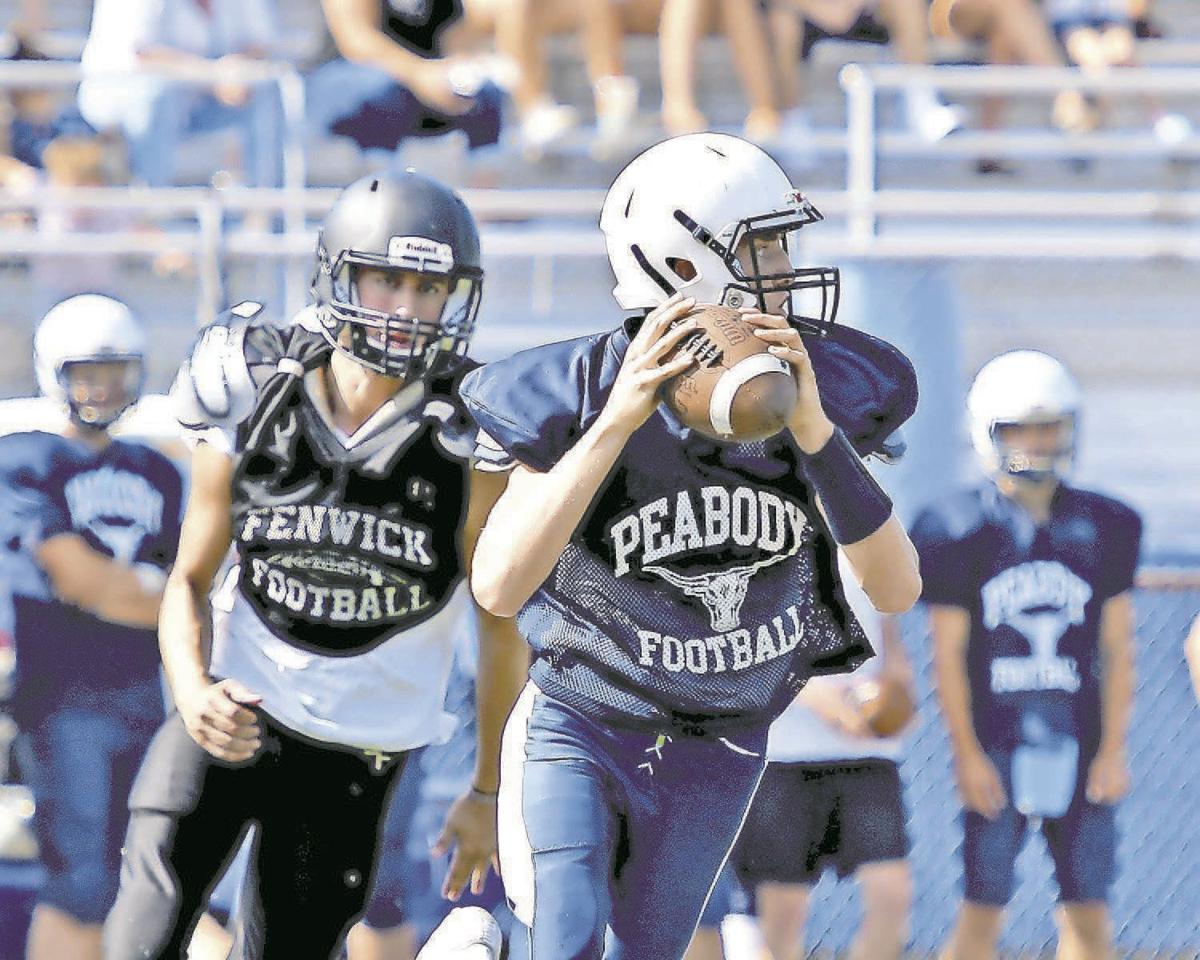 Alex DeNisco’s experience under center should help Peabody put more points on the board in 2019.

Senior captain Colby Therrien was one of the Tanners' leading scorers last year and can do damage at both running back and wide receiver.

Junior Nick Vecchio is one of a host of talented skills players Peabody High hopes to draw on this fall.

Alex DeNisco’s experience under center should help Peabody put more points on the board in 2019.

Fast, physical and like they have something to prove.

That's the way the Peabody High football team wants to play this fall. Led by five diligent senior captains, the Tanners have been pounding that philosophy home since opening training camp in late August.

"We're pretty comfortable in an underdog role. We want to prove things on the field," said senior captain Colby Therrien, a returning starter at receiver. "We know we need to be focused and can't afford bad weeks of practice. If we don't bring it every single week, that's on us."

The Tanners squeaked into the playoffs in Division 2 North last fall but were disappointed by their first round exit and overall 5-6 record. The Northeastern Conference North looks strong, and Peabody is the only team in the league that hasn't played in a sectional final over the last three seasons — so they know passing tests against the likes of Beverly, Marblehead, Danvers, Gloucester and Swampscott won't be easy in their quest to quash the program's 19-year league title drought.

"There's no big heads here. Everyone wants to put in the work to get to that spot," said senior receiver and defensive back Dylan Peluso, another captain. "There's been more highs than lows this year in our practices. The boys are putting in the work."

Building on last year's moderate success in the spread offense is one of Peabody's main goals. Junior quarterback Alex DeNisco took over in November and shined, especially in completing 15-of-17 passes on Thanksgiving in beating Saugus. His command of the huddle has endeared him to his teammates, who've given him the same nickname as a similarly blonde haired quarterback from the movie 'Remember the Titans.'

"Sunshine — he's been awesome," said Declan Russell, another captain who plays both receiver and defensive back. "His balls have been ridiculously accurate. He was good last year, and you can tell he's improved and he's ready to go."

With seven players that caught at least one pass returning, DeNisco has plenty of weapons to work with including Therrien, Peluso, Russell, juniors Steven Bua and Kyle Maglione, senior Brandon Caniff and senior tight end and captain Ramon Franco.

Senior captain Angel Paulino is a three-year starter at running back with 1,323 career yards on his resume. Short, shifty and powerful, Paulino looks tailor made to slash through spread running lanes. He'll be spelled by youngsters like Nick Vecchio, Cam Cuzzi, Brandon Pszenny and Daviel Canela.

"The focus for us is making more high percentage throws," said head coach Mark Bettencourt. "Too many times last year we were caught in third-and-long. We don't want the defense to know if we want to run or pass — and it's hard to be unpredictable if you're third-and-10 all the time."

Senior Phil Makoci is the most experienced lineman with four starters up front lost to graduation. Juniors Shay Palmer, Jaden Nigro, Zen Garcia and Brandon Glass are vying for spots on the line along with Michael Leonard, Dylan Rea and Dylan Davis.

Defensively, former Essex Tech head coach Greg Haberland has joined Peabody's staff and instituted a versatile three-man front. Senior Joe Casey is one the lynchpins at outside linebacker, with juniors Bua and Maglione doing some impressive run-stuffing in the middle.

"They're high energy players," Russell said. "They both look like safeties but hit twice as hard as most linebackers I've seen."

Having Caniff back at safety is a big comfort for Peabody, while Russell and Peluso have experience in the secondary. Senior JoJo Kashila and newcomer Fred Koffi should help out in the back end; up front, Franco and Glass flank nose guard Ari Rozopoulos.

"It's a very versatile defense and it's a lot of fun," said Franco. "It takes a certain mindset to mix the skill and the hitting, and we're lucky that we have a lot of guys that can do it."

The Tanners scrimmaged Bishop Fenwick, Lynn English, Andover and Woburn to prepare for the home opener against rival Salem on Sept. 13; it's the 99th all-time meeting between the foes but the first in four years, so making a big impression early is certainly on the radar.

"We have plenty of depth," said Therrien. "We have everything we need — it's up to us to go out and execute."

"The chemistry's been a lot better this year. There's been no yelling, no beefing — just everybody pulling in the same direction," added Paulino.

Did you know: September 13 is tied for the latest season opening date for Peabody High in the last 15 years. It will also mark the first time the Tanners have opened at home against Salem (as they did regularly in the 1990s) since 2011.