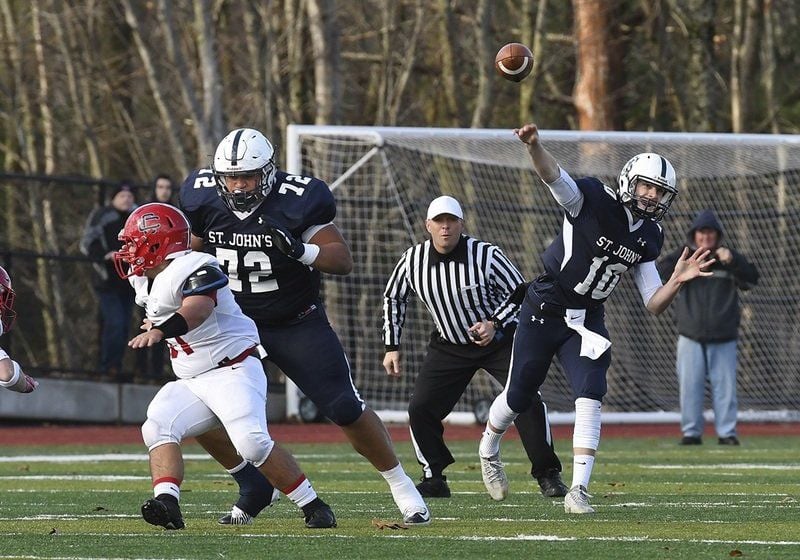 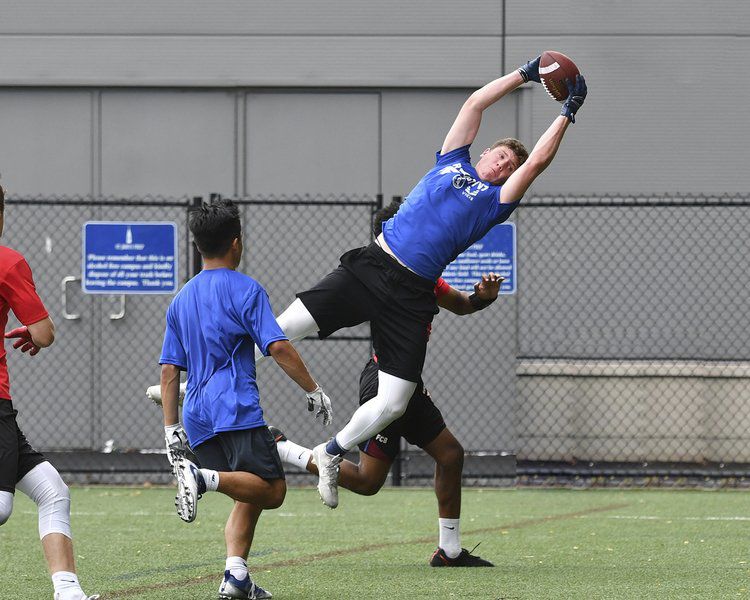 Last year was a magical one for the St. John’s Prep football team, one that ended with the Eagles being crowned Division 1 Super Bowl champs at Gillette Stadium. That team was loaded with talent on both sides of the ball, and the players graduation claimed left some very big shoes to fill.

“This season we’re as young as we’ve ever been since I’ve been coaching,” said sixth-year head coach Brian St. Pierre. “We have a lot of sophomores and freshmen who are working hard. The energy is good and we’re further along than I expected to be at this point, because the kids had a really good off season. Our strength and conditioning people did a terrific job.”

One key player back is senior quarterback Matt Crowley, who had a strong junior year after completing 132-of-226 passes for 1,975 yards and 23 touchdowns.

He’ll be throwing to a new group of receivers, since his top four from the Super Bowl season are gone including Wes Rockett, who is now playing at Brown. Senior captain Anthony Fagan is the leading receiver back (4 receptions, 97 yards, 2 TDs).

“I asked kids to raise their hand if they touched the ball more than 10 times, and the only one with a hand up was (running back) James Guy,” said St. Pierre. “We graduated everyone else.

“Crowley is a veteran leader, and the young guys have to gain his trust. If they are where they’re supposed to be, he’ll get them the ball. So far we have (senior captain) Matt Ducheman starting at Z (i.e. flanker), while competition at the X (split end) is between freshman Joenel Aguero and senior Dan Delaus.”

Aguero has already received a scholarship offer from a Division 1 college. Sophomore Jackson Delaney, who is very athletic, is also in the group of top three receivers along with sophomore Charlie Wilmot.

A year ago Guy rushed for 306 yards and four TDs on 40 carries. He will be counted on heavily along with a committee of other backs led by seniors Pat Nistl, Nick Masterson, Jim Schneiders and sophomore Dylan Wodarski. Masterson will be the starting fullback, and whoever has the hot hand will get more opportunities at tailback.

Cooper Smith, a 6-foot-3, 300-pound captain, and fellow senior Mason Davis return on the offensive line. Smith was moved to center midway through last season and also is a defensive tackle.

Junior Collin Taylor, a Division 1 or 1A prospect, will also help out and start at defensive end along with Mike Fionda (6-3, 225 pounds), who started a year ago before suffering a broken ankle. Fagan will also see action at defensive end.

Senior John McDonald (6-2, 235 pounds) is a two-way tackle while Theo Hutt is at the other offensive tackle spot. Davis (6-3, 240) is at linebacker along with senior Tripp Clark as the Mike or weak side linebacker. Wilmot and Duchemin are the corners.

“We have a lot of holes to fill, and the rest is unknown right now. I always tell them I don’t determine who plays; you do.”

The Eagles open up at home against Bridgewater-Raynham, go on the road to Haverhill and Central Catholic in Weeks 2 and 3 before hosting Somerville on September 27 under the lights. The Highlanders take the place of Everett, which dropped St. John’s from its schedule.

“Everett never really said why they dropped us and picked up Brockton,” said St. Pierre. “It’s disappointing because that’s always a very competitive program; they beat us a lot more than we beat them. There’s a good chance we’ll see each other down the line. I called up and down the East Coast to the Mid Atlantic states trying to find somebody. We got lucky that Somerville stepped up; you always want to have a full schedule.”

St. Pierre said he is excited about this team. He said there’s good leadership with captains Crowley, Duchemin, Smith, and Fagan.

“We have leadership not only with our captains but the leadership team (two from the senior, junior, and sophomores classes),” he added. “They will work with the team so we have open communication. We want our players to feel they are being heard, and this has worked well in the past.”

Did you know: Homecoming weekend at Glatz Field will feature a rematch of last year's Super Bowl with Catholic Memorial at 2 p.m. on Oct. 12. The Eagles beat the Knights during the regular season and again in the Super Bowl last fall. Head coach Brian St. Pierre said his young squad isn't looking ahead, but rather focusing on the day-to-day while gearing up for their season opener.