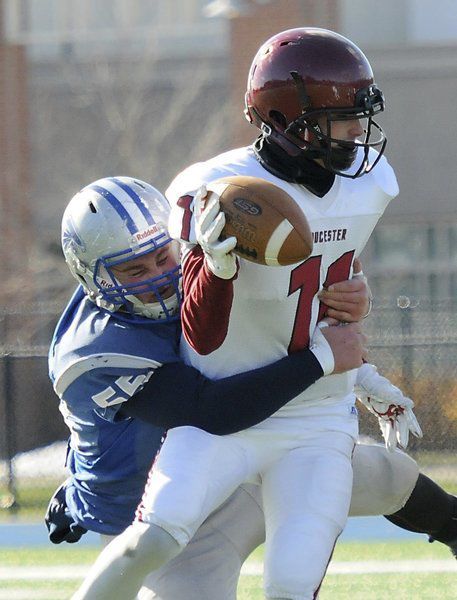 Few players on the North Shore can match the pressure and tackling prowess that Danvers captain Tom Walfield can provide on an every down basis. 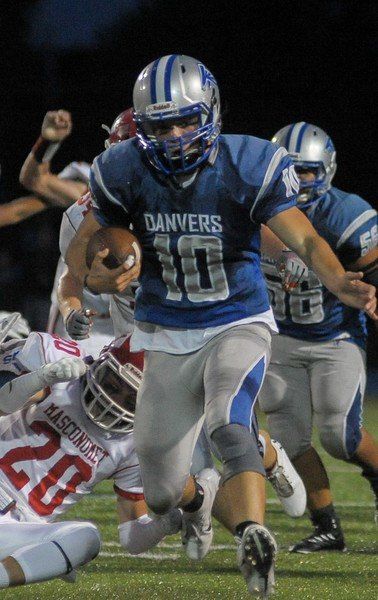 Returning All-Northeastern Conference standout Russ Canova of the Falcons is a threat both running the football and chasing down opponents from his linebacker spot.

Few players on the North Shore can match the pressure and tackling prowess that Danvers captain Tom Walfield can provide on an every down basis.

Returning All-Northeastern Conference standout Russ Canova of the Falcons is a threat both running the football and chasing down opponents from his linebacker spot.

You might think that a team needing to replace 1,700 rushing yards, over 1,050 passing yards, more than 850 receiving yards and 35 total touchdowns might be in trouble this fall.

But as we've discovered all too well this decade, doubting the Danvers High football team is a fool's errand.

In the midst of the greatest run in school gridiron history — which dates back to 1902 — Danvers has had six straight winning seasons, the first time it's ever accomplished that feat. The Falcons have gone 44-23 during that span and are coming off of a season in which they went 8-3, reached the Division 3 North title game and blanked their arch rivals from Gloucester on Thanksgiving morning while surrendering a total of 16 points in their three losses.

So while they've lost some offensive firepower, don't believe for one second that the Blue-and-White won't be back in the thick of the Northeastern Conference North and Division 3 North title chase once again. They have an excellent line, plenty of varsity experience and a hunger to keep the good times rolling while achieving the lofty expectations they have for themselves.

"This team believes they can play with, and beat, anyone on our schedule, in the conference, in the division and in the area," said third-year head coach Ryan Nolan, whose teams have won 14 of the 22 games they've played under his stewardship. "They've had a great offseason in the weight room and are a strong group of very good football players that are also strong students.

"They want to continue to build upon what Danvers High football is all about."

Consider that the Falcons return four All-Conference players in their 7-man defensive box and a trifecta of three-year starters on the line, and that's a solid foundation for success. Add in the fact that the team's skill players are eager to step up into more prominent roles on both offense and in the defensive backfield, and a seventh straight winning season seems like a fait accompli.

Tom Walfield, a 5-foot-11, 215-pound center and inside linebacker, will serve as a team captain alongside fellow senior Ezra Lombardi, a 5-9, 170-pounder who'll split time between quarterback, running back and wide receiver in addition to playing safety and cornerback.

Junior Andrew Chronis, a 6-foot, 245-pound tight end and defensive lineman, is a returning All-NEC player, as are seniors Russ Canova (5-10, 190 lbs.) at fullback and linebacker, and 5-8, 190-pound Jack Strangie (FB/LB). Each of the three are defensive demons in Danvers' multiple 7-man fronts, capable of bringing down ballcarriers, causing disruption in opposing backfields and dropping into pass coverage.

The well of team talent doesn't end there, either. Seniors Jacob Stone, a 6-4, 290-pound behemoth, is a difference maker at offensive tackle and on the defensive line; he can push the pile backwards or keeping enemy jerseys away from his own quarterback. Fellow senior Rich Canova (Russ' twin brother) is a 5-10, 190-pound running back and outside linebacker who blocks as hard as he hits. J.P. Kelter, yet another 12 grader, should be more involved in the passing game as an end and can also come out of the backfield; he'll play in the secondary as well. Ben Wilochoski, a junior two-way lineman who can also play linebacker, packs a lot of athleticism onto his 6-1, 230-pound frame.

Sophomore Chase Eary is ready to make an immediate impact, too; the 5-9, 175-pounder is elusive as a running back and strong in the defensive secondary.

Brendan Whelan (6-2, 195), Evan Glynos (6-foot, 270) and Mike Leon (6-1, 215) are sophomores who should all have a big impact on the Danvers lines. Classmate Colin Kelter falls into the same category as a skill position player, and junior Darren McDermott figures to see time at quarterback along with Lombardi.

Did you know: With a winning season this fall, Danvers will have achieved a dozen of those this century. That's the same number of victorious campaigns that the Oniontowners produced between the years of 1902 to 1946 (a 45-year stretch) as well as 1959 to 1999 (a 41-year span).