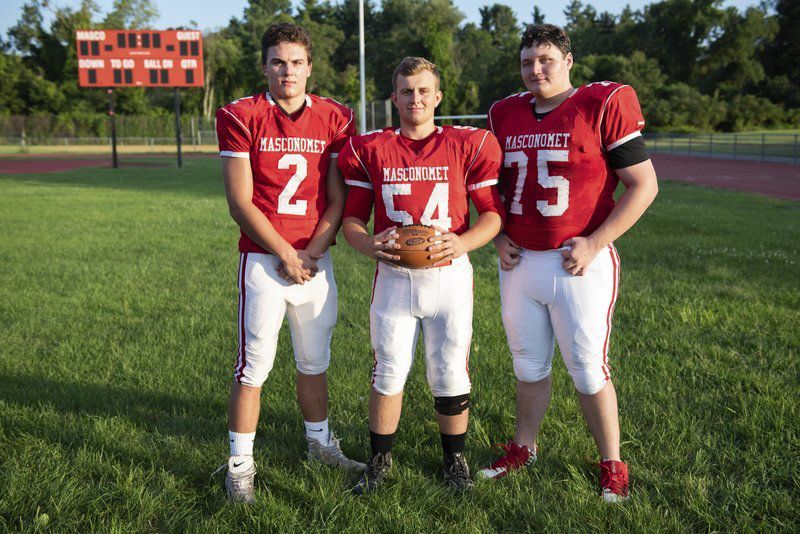 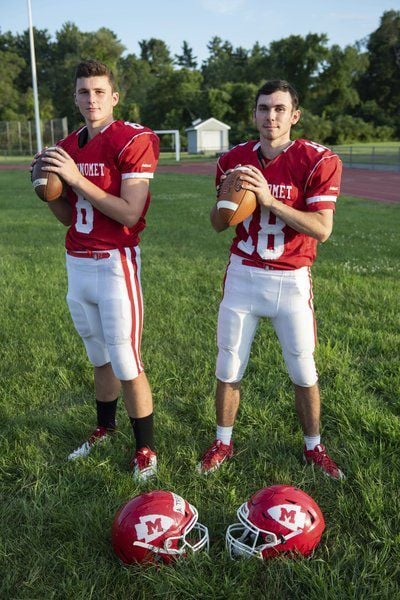 Masconomet quarterbacks Alex Theriault (left) and Marshall Lastes both took snaps last year and should both contribute for the Chieftains again this season.

Masconomet quarterbacks Alex Theriault (left) and Marshall Lastes both took snaps last year and should both contribute for the Chieftains again this season.

A football team can never have too much speed, and this year the Masconomet Chieftains have some real burners in the backfield.

Head coach Gavin Monagle is hoping to use that speed, along with some key returning players, to turn things around following last year’s disappointing 4-7 mark.

Junior Greg Walker and sophomore Andrew Aylwin are probably the fastest players on the team, according to fifth year head coach Gavin Monagle.

Walker improved steadily last season and earned the starting outside linebacker job midway through the fall, while plans call for Aylwin to be used primarily as a receiver. Another very quick player who also has decent size is junior Nick Ciampa, who will see time in the backfield and at either cornerback or outside linebacker on defense.

The senior class is small in numbers but loaded with outstanding leaders.

Senior Marshall Lastes and junior Alex Theriault are battling for the starting quarterback job; both saw action at that position a year ago when Lastes completed 44 passes for 701 yards and seven touchdowns while Theriault threw for 352 yards.

Another senior who figures to play a big role is Will Hunter, a running back and receiver who will also start on defense. He caught 12 passes for 97 yards and a touchdown a year ago.

“We need to get Will the ball more this season,” said Monagle. “Last year he was an outside linebacker, but we plan to move him around more this time around. He can help out at many positions because he’s very athletic.”

Senior captain Jack Corcoran is the leading returning receiver with 15 catches for 283 yards and three TDs a year ago. He is a big target at 6-foot-4, 220 pounds and runs well after catches. He will also help out at defensive end.

“Our strength is our core senior group,” said Monagle. “We may not have that many, but they’re all good leaders and versatile athletes.

“I’ve been really pleased with the positive attitude all the kids have shown. Having good team speed is also going to help us, and we’ve got a couple of big guys who move well.”

Monagle said his club expects to use many different players, especially when it comes to running the ball. “My only concern is our need to improve and how quickly we can get better,” he said, “because we graduated some big kids who are hard to replace.”

The team’s offensive line will be headed up by senior captain Matheus Kartsounis, a 6-2, 250-pound two-way starter. Fellow senior captain Connor Hubbard was injured for much of 2018, but returned for the last four games at guard as a junior. Teddy Fellows, a 6-1, 260-pound guard, will be a two-way starter and junior James Berry stepped up to start on the line in the last four games of last season.

Senior John Russo is an experienced lineman who earned a starting job at tackle the last four games in 2018, and senior John Malone will also help out on the line. He’s currently out with an injury, but should be back soon to strengthen the guard position.

Senior Jared Cuhna will help the team at both guard and defensive tackle, while senior Nikolay Marshall returns at defensive end after missing the second half of last year due to injury.

Two sophomores have been impressive in the early going. Mat Nadworny is a versatile athlete who will help out at running back and outside linebacker, while Charlie Stark, a big 220-pound middle linebacker, has also caught the coach’s eye.

Junior Logan Campbell adds depth to the receiving core after gaining experience a year ago. Another player to watch is starting inside linebacker Brandon Bettano.

“We’ve got a couple of young kids coming up who are pushing the older ones,” said Monagle. “Will Magnifico and Zach Grande could play on both sides of the ball. There’s a lot of healthy competition.

“Home games are always a good thing, and five of the first seven games are at our place. Right off the bat we take on one of the top guns in the Northeastern Conference (Danvers) which is always a strong team.”

Did you know: Masco will travel to Everett on Thanksgiving morning, marking the first home Turkey Day tilt for the Crimson Tide in at least 10 years, according to Monagle. Two years ago, the two teams met at Fenway Park. Everett Stadium will be packed to capacity and the noise level will be off the chart.