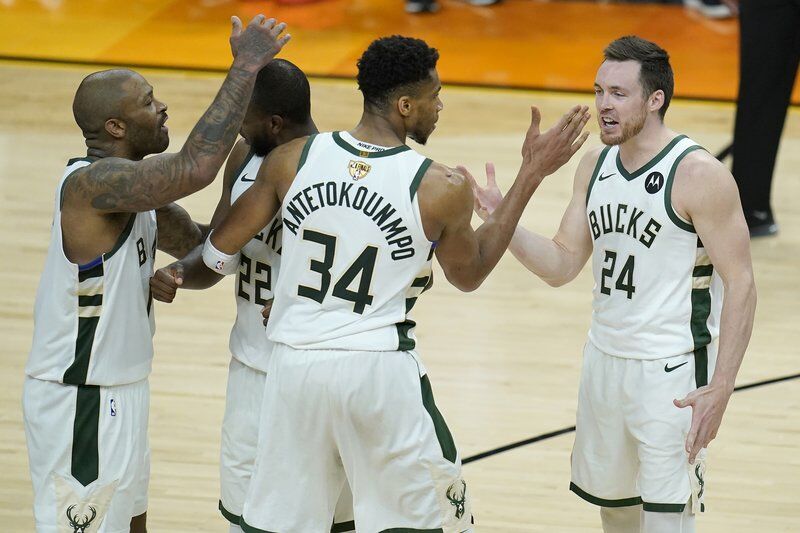 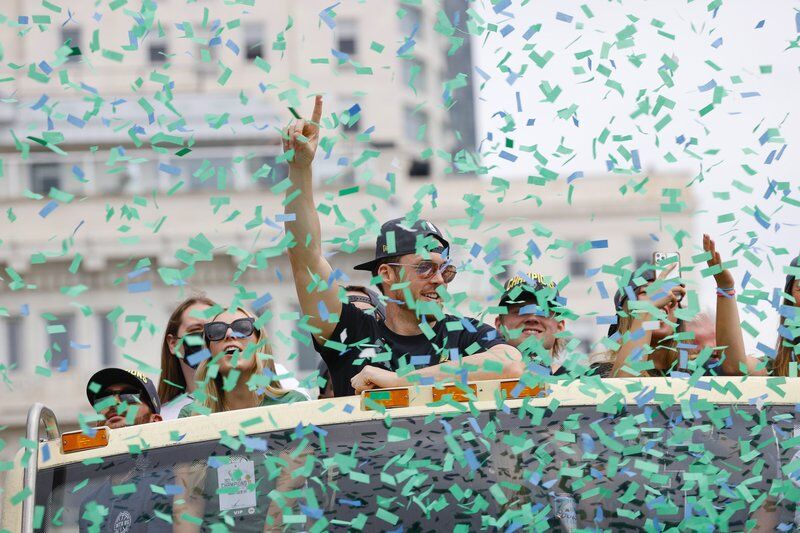 Milwaukee Bucks’ Pat Connaughton gestures the crowd during their NBA Championship parade back in July. Connaughton played an integral role to help his team capture their first title since 1971. 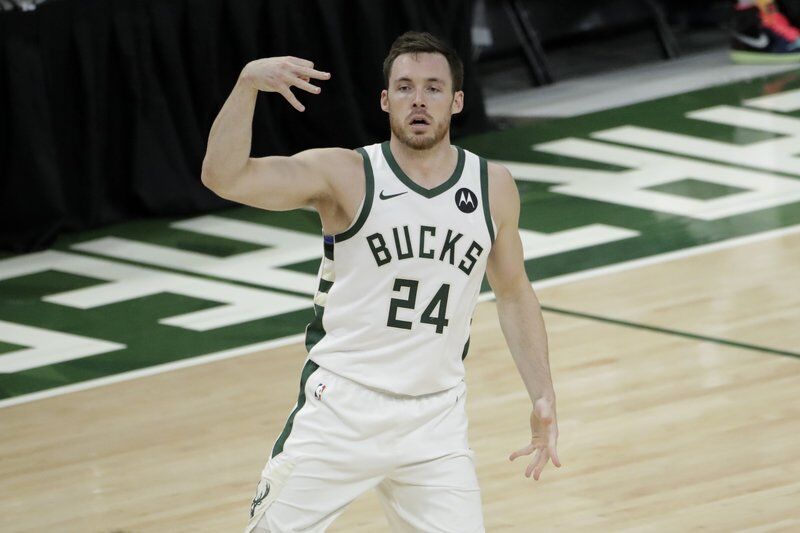 Associated Press photosMilwaukee Bucks guard Pat Connaughton celebrates after making a 3-pointer in Game 4 of the NBA Finals against Phoenix.

Milwaukee Bucks’ Pat Connaughton gestures the crowd during their NBA Championship parade back in July. Connaughton played an integral role to help his team capture their first title since 1971.

Associated Press photosMilwaukee Bucks guard Pat Connaughton celebrates after making a 3-pointer in Game 4 of the NBA Finals against Phoenix.

The moment the champagne bottles popped in the Milwaukee Bucks locker room following their NBA Championship clinching victory over the Phoenix Suns back in July, Pat Connaughton was nowhere to be found.

Instead, the St. John’s Prep product was basking in the glory on a virtually empty court with his family and friends. There would be plenty of time to celebrate with his teammates afterwards, but at that moment all he wanted to do was share the excitement with his day ones.

“I was on the court with my parents, coach (Mike) Crotty, one of my best friends Joe and his wife; they all came to the game and I was out there standing on the court, confetti still coming down,” recalled Connaughton, who played a significant role off the bench in helping the Bucks capture their first title since 1971.

“We just stood there and soaked in the moment. For me to be able to stand on the Finals court with people that were closest to me and see their faces of realization like, ‘this is really happening’ ... I mean, 10 years ago I was winning a (high school) state championship and if I were to tell you I would win the NBA championship 10 years later, how many people would’ve believed it? It would’ve been that group I was with on that night, and that’s special.”

A year of growth

Heading into 2020-21, Connaughton was projected to be a middle of the bench type reserve with the potential to play more meaningful minutes based on matchups. But the 28-year-old guard quickly became a much more utilized piece.

He played nearly 23 minutes per game during the regular season (a career-high), posting a serviceable 6.8 points, 4.8 rebounds, 1.2 assists and 0.7 steals. Connaughton could knock down the open shot from deep and rebound better than the majority of the players at his position — but it was the little things he did on the court to earn his burn.

Come playoff time, those little things became that much more important, especially after starting swingman Donte DiVenczo was injured in the Bucks’ opening round win over Miami. With the trust from head coach Mike Budenholzer, Connaughton was thrust into an ever bigger role as his team made their run.

After averaging 17.2 minutes in the four game sweep of the Heat, Connaughton played nearly 21 minutes per contest in a grueling seven-game series win over Brooklyn. That number crept up to 25.3 per game in the Conference Finals against Atlanta, and soared even higher (30 minutes per) in the Finals against Phoenix.

His shooting from distance certainly made the biggest impact on paper, but it was his hustle play, versatility on defense and overall intelligence as a basketball player that allowed him to thrive on a nightly basis.

“For me personally, it’s exciting to go into a new NBA season coming off the postseason that I had,” explained Connaughton. “Coach Bud had trusted me in the playoffs and I was able to find a way to impact the game outside of just shooting. Honestly, it was similar to high school in that regard. Just producing in other areas that aren’t your stereotypical ways of trying to help; trying to put myself in position to continue to grow and get better, and have a consistent step forward and build on it.”

Playing big minutes, especially on the largest of national stages, often comes with criticism, and sometimes praise. When Connaughton struggled — his low point was probably Game 1 of the ECF when he air balled a go-ahead 3-point attempt in the waning seconds of an eventual loss — he was undoubtedly bashed on social media for his performance. When he played well, which was far more often than not, fans were quick to take notice on Twitter and the like, too.

Fortunately for Connaughton, he didn’t experience those ebbs and flows of folks critiquing his every move on the internet. Not because it wasn’t there, but because Connaughton simply chose to ignore it.

At the beginning of the 2020-21 campaign, he deleted all social media apps on his phone and admits he never even checked in throughout the year. Free from all the outside noise, Connaughton was able to focus solely on him, his team, and their lofty goals, a move that certainly paid off.

“The night before we played Game 1 (of the regular season) in Boston where we lost on a buzzer beater, that was the last post I had,” said Connaughton. “I didn’t have the apps, I never signed on and I tried to make a conscious effort to enjoy the season. I think social media can bring about highs and lows and whether you take stock in it or not, it still plays some kind of role in how you go about things.

Connaughton’s certainly been busy since the Bucks were officially crowned champs back on July 20. But it’s been a happy, exciting sort of busy.

He’s made the rounds on such platforms as the Dan Patrick Show, while also making an appearance on the popular Barstool Sports Podcast, Pardon My Take. Of course, he’s remained active physically, but admits he didn’t pick up a basketball for over three weeks following the season. He simply needed a breather, and a much deserved one at that.

Connaughton’s spent time working with his “With Us Foundation”, including running a two-day hoop camp in Wisconsin just 10 days after the championship win. He’s also had more time to dive deeper into his continuously blossoming real estate career, where he’s the president of his own entity “Three Leaf Development”.

Most recently, Connaughton played in the inaugural Wisconsin Athletic Hall of Fame golf outing, helping his team come out on top in the scramble format tourney.

“The summer of championships continues,” joked Connaughton, who competed in the golf tournament alongside a number of former Green Bay Packers including Donald Driver and Jordy Nelson. “The competition was good. I think we ended up 15-under par with no mulligans, no strokes given.

“I can play a little bit,” he added. “I can hit it but sometimes I’m directionally challenged as my dad likes to say. But I enjoy golf, it’s one of my favorite sports to play that isn’t a job.”

Before he knows it, Connaughton will be gearing up for training camp ahead of the 2021-2022 season.

“It’s unique, right?,” he explained. Connaughton. “Because this season was condensed the playoffs actually felt like you had more time to recover than the regular season. We didn’t have much of an offseason last year after the bubble, so we were all trying to find that balance. You go (from the start of last season in December) until July 20 and then training camp starts September 27, first preseason game is October 5 ... you just don’t have that much time to rest and recover. So I’m trying to find that balance of staying in shape, healing my body and fighting through at the same time. Not putting myself in a position to reaggravate injuries but being active at the same time.”

While he’s not necessarily running sprints, lifting heavy or even doing full court pick up right now, Connaughton’s been able to stay fresh with more reserved forms of exercise: walking and carrying his bag on the golf course, doing hot yoga, jogging, etc. His time to get back out there in full force will come, but for now he’s enjoying the basketball hiatus, so to speak.

When the time does come for him to resume full basketball activity, he’ll do so with somewhat of a new look roster. The key guys are back in the fold — namely Giannis Antetokounmpo, Khris Middleton and Jrue Holiday — but management has also brought in some new pieces for depth and security purposes.

Those additions include Grayson Allen, Rodney Hood, former Celtic Semi Ojeleye and journeyman George Hill, who spent two seasons with Milwaukee from 2018-2020. Milwaukee is the reigning champs and will be until a new victor is crowned next June. But in order to keep up with the rest of the league, roster alterations are a necessary piece of offseason reloading.

“I think Jon Horst, our GM, did a great job with the acquisitions and replacing guys,” said Connaughton. “We added some depth; the NBA season is long, 82 games over the course of basically seven months then two months of playoffs or whatever it is. So you need depth and you need guys to revamp the roster and I think they did a great job with that. I’m excited for it.”

With their core group back, Connaughton included, and a wealth of experience and talent coming in, the Bucks are one of the early favorites to repeat as champions. Still, they have just the third best odds to get it done (behind the Nets and Lakers), but that doesn’t bother Connaughton. Besides, they are already NBA champs, and nobody can ever take that away from them.

That reality is certainly starting to resonate as more time has passed.

“I think the irony behind it all is it’s become a reality more and more since that final buzzer rang,” said Connaughton. “If you look at the nature of most championship games, the Super Bowl, the Final Four, the (college football) National Championship, it’s all one game. The NBA playoffs on the other hand are a two-month operation and you never know when the final game is going to be.

“When the buzzer went off and confetti rained, you know what happened but a week later you wake up and you’re still a champ. We did it. We were NBA champs, and that’s etched in stone. It really is just a surreal feeling.”

Connaughton and the Bucks will begin their title defense against the Nets on October 19. They’re champs for now and forever, but would love nothing more than to experience that top of the world feeling again come next June.