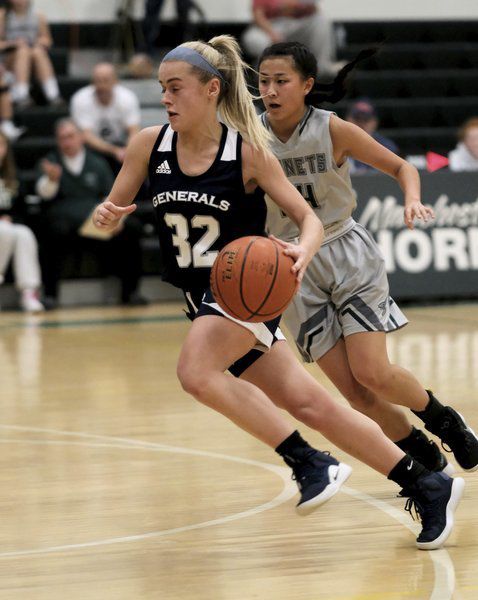 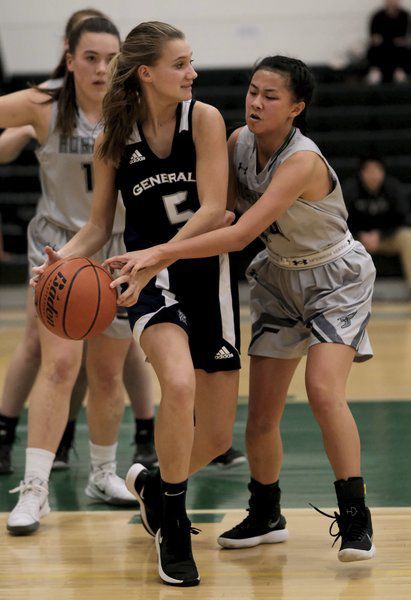 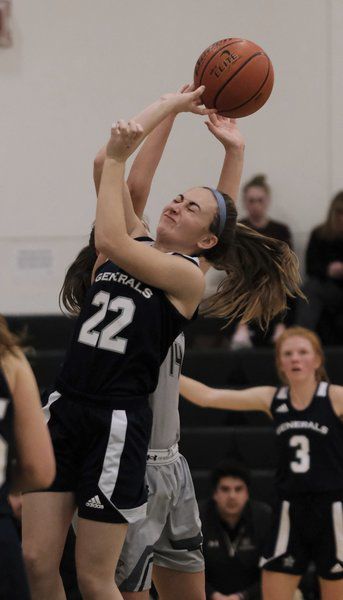 Hamilton Wenham's Sarah Cooke has the ball batted away during first half action against Manchester Essex. KIRK R. WILLIAMSON/ photo. 1/31/20

Hamilton Wenham's Sarah Cooke has the ball batted away during first half action against Manchester Essex. KIRK R. WILLIAMSON/ photo. 1/31/20

Salem 54, Malden 52: Stephanie Cantone erupted for a game-high 25 points and Cassadi O’Leary scored 11 to help the Witches earn their second win of the year. Anna Cantone added 10 points in the winning effort.

Marblehead 49, Peabody 46: Trailing by as many as 19, the Magicians (14-2) caught fire at both ends of the floor to topple the Tanners. Emily Clough’s 21 points and 15 rebounds led the charge while Leila Walton scored 14 with 10 boards. Maddy Erskine had a fantastic all-around game while Molly Cronin, Maddy Lowy, Fehr Gillette and Cat Candelaria all provided tenacious defense to help slow down Peabody (5-9), which had 24 points in the opening quarter.Emily Carney was the high-scorer for Peabody with 13 points and five assists, Georgia Leone had 11 points and five rebounds and Emma Bloom had nine points, 10 boards and five assists.

Danvers 51, Swampscott 38: Allie Vaillancourt had eight points and the Falcons got a complete team effort on defense to down the Big Blue.

Ipswich 42, Georgetown 30: The Tigers evened their record at 7-7 with the CAL Baker win.

Essex Tech 42, Greater Lawrence 39: Brianna Pothier scored 11 points while Sinclair McGovern did an excellent job at the line, going 9-of-10 and scoring 11 points. Rhu Arensault and Katie Napoli played outstanding defense for the Hawks (4-10) while combining for 12 rebounds, nine blocks and six steals.

Cathedral 56, Bishop Fenwick 39: Freshman Bella Romero continued her strong run of play with 10 points and six rebounds and Veronica Tache led the Crusaders (10-5) with 15 points. Brynn Bertucci also had a strong outing with nine rebounds along with two points.

Georgetown 60, Ipswich 50: Freshman Ray Cuevas caught fire from downtown with six 3-points and 22 total points but the Tigers (2-13) were outpaced by the Royals. Will Vanderbilt added 14 points with four trifectas of his own and Collin Adams posted eight points, all in the second half.

Marblehead 48, Peabody 43: Dylan Freddo scored 13 points with 17 rebounds and the Magicians (7-7) controlled the third quarter to pull away from the Tanners (7-8), who led by one at the break. Cole Kronberg scored 11 points for Marblehead and Adam Zamansky did a nice job on the glass with 10 boards as well as six points. Tyler Joyce led Peabody with 17 points while Joangel Lugo had 10 points and three steals and Chioke Onwuogu chipped in eight points and eight rebounds.

Beverly 66, Gloucester 47: Senior captain Duncan Moreland had 25 points with six rebounds to help the Panthers (12-1) pull away in the second half and remain unbeaten in Northeastern Conference competition. Jack Crowley added 13 points with 10 rebounds and Gabe Copeland played well with eight points and four boards.

Hamilton-Wenham 73, Manchester Essex 53: Sophomore Markus Nordin had one of his best games of the season with 26 points and 10 rebounds to help the Genearls (9-5) win their nine straight and tie the Hornets atop the CAL Baker standings. Ryan Hutchinson added 21 points and Carter Coffey scored a dozen along with eight points and six assists.

Kents Hill 3, Pingree 1: Zarena Sawyer had the lone goal for the Highlanders (6-8-1) with assists from Kate Hill and Katelyn Clarke. Defensemen Gaby Nagahama and Addy Fenton turned in superb efforts and Callie MacLaughlin made 22 saves in a solid showing in net.

Hamilton-Wenham splits: The Generals beat Masconomet on the girls side, 104-66, but fell on the boys side, 88-54. The girls were led by Camille Martin, Helen Langer, Riley Reader, Jordan Reader, Caroline Pratt, Ivy Joyal and Erica Luo while the boys got strong performances from Jake Maier, Ryan Traverse and Victor Querubino.

Norwich 7, Salem State 1: Mackenzie Mallet’s goal midway through the first gave the Vikings the lead, but the Cadets poured on three goals each in the second and third periods to pull away. Dana Smullen totaled 30 saves and Salem State was outshot 26-10 after being even in the opening frame.