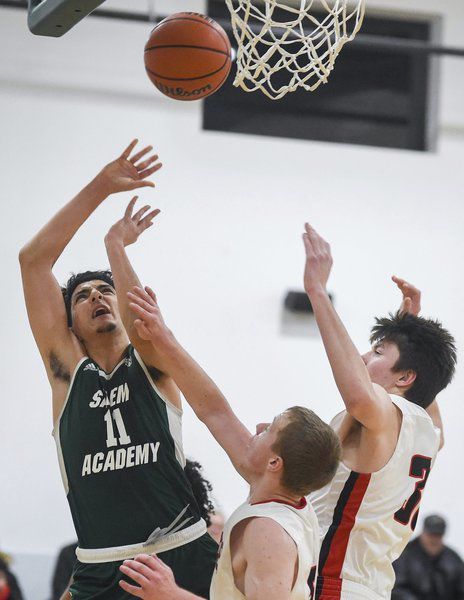 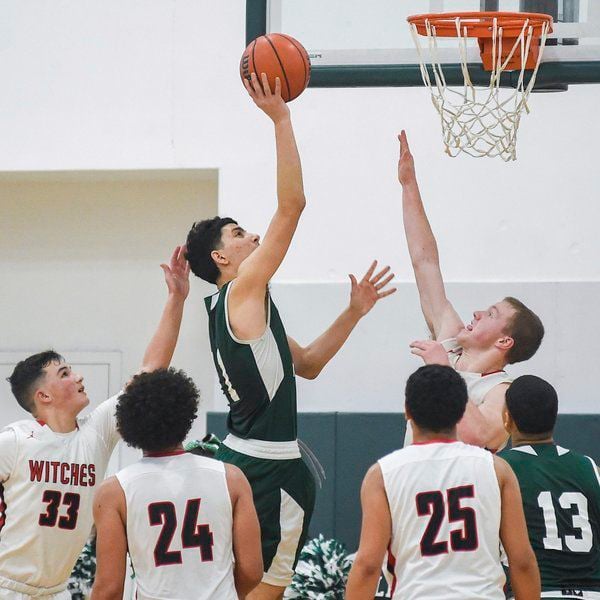 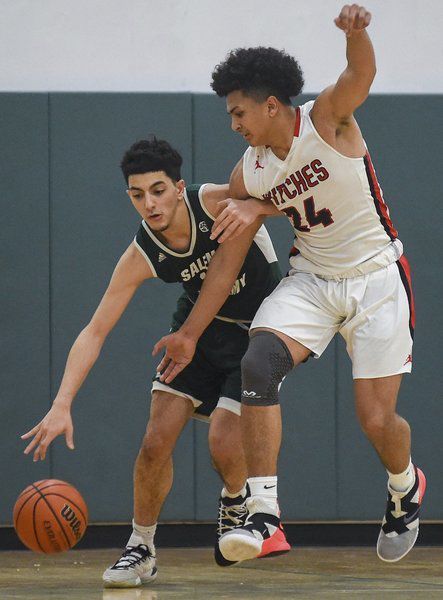 JAIME CAMPOS/Staff photo Ali Kachmar, left, of Salem Academy attacks with the ball while being pressured by Salem's Jorge Guerrero (24) during a basketball game between Salem Academy and Salem in Salem. 1/8/2020 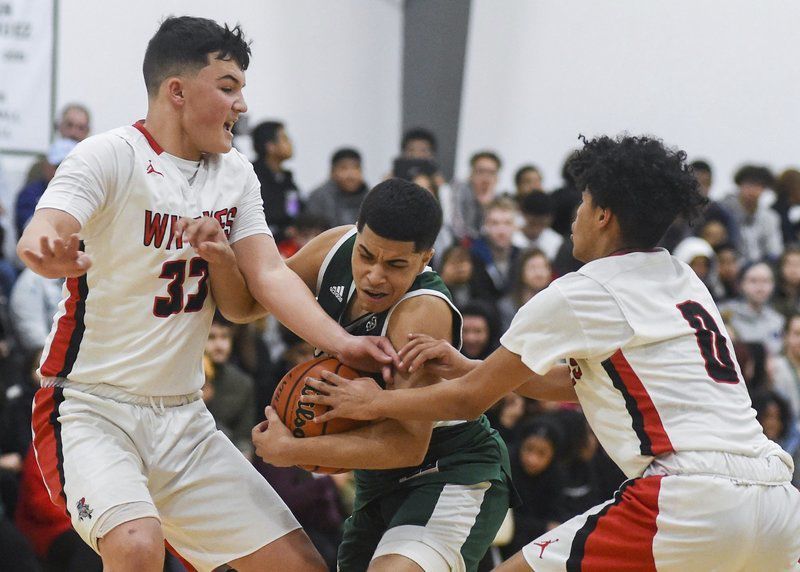 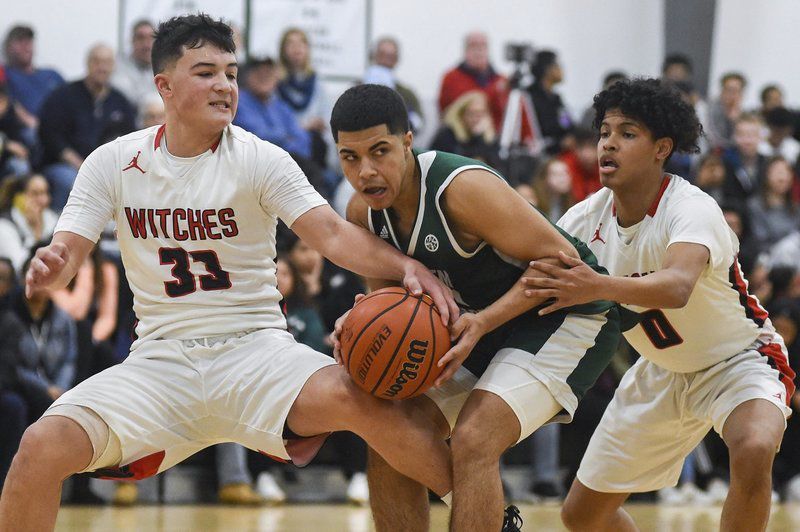 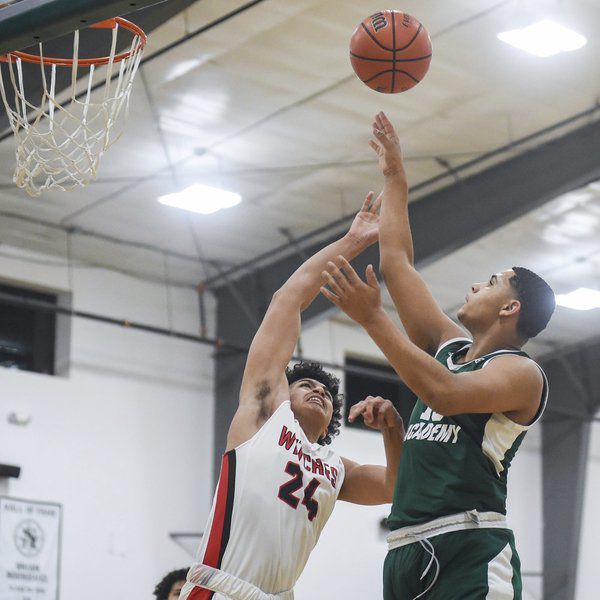 JAIME CAMPOS/Staff photoSalem Academy's Dexter Brown goes up for a shot while being defended by Jorge Guerrero of Salem High. 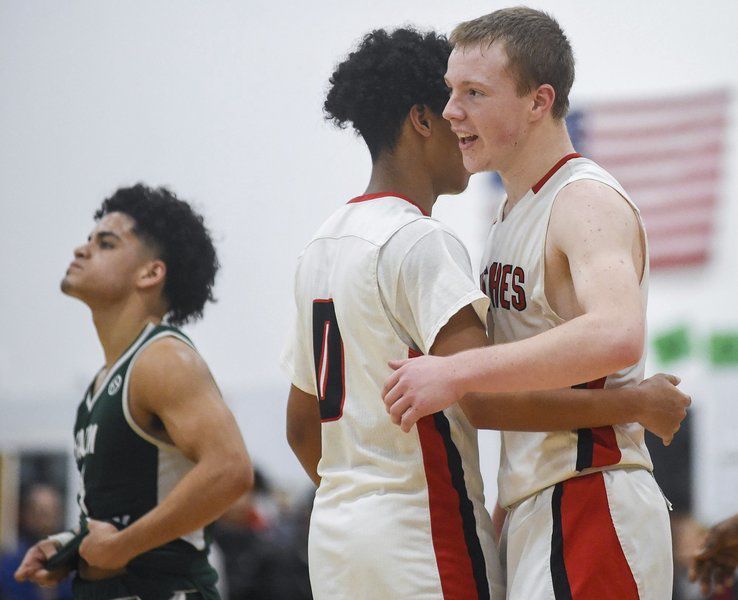 JAIME CAMPOS/Staff photo Ali Kachmar, left, of Salem Academy attacks with the ball while being pressured by Salem's Jorge Guerrero (24) during a basketball game between Salem Academy and Salem in Salem. 1/8/2020

JAIME CAMPOS/Staff photoSalem Academy's Dexter Brown goes up for a shot while being defended by Jorge Guerrero of Salem High.

It just so happens that sport was boys basketball, and the competitive clash was nothing short of a success. The gym was packed with fans from both sides, and the two teams competed at a high level throughout despite their wildly varying schedules.

“We didn’t necessarily get an exact number in terms of the turnout, but I’d say there was about 600 people in the gym — definitely the biggest crowd we have ever had,” said Salem Academy athletic director Drew Betts. “The fans were great, the kids were great, it was a competitive game and even the junior varsity game was packed.”

Competing as a member of the MIAA (Massachusetts Interscholastic Athletic Association) for the first time this school year — and thus eligible to qualify for the MIAA state tournament — the Navigators endured a big test against the Witches and passed with flying colors. Sure, they dropped a 61-46 decision, but were right in the ballgame until the end. The final score was not indicative of the competitiveness of the contest.

It was a single-digit game after one quarter and again at the half, and remained close until crunch time when the Witches caught fire. Salem High’s Bobby Jellison (18 points, 9 rebounds, 6 assists) and Ethan Doyle (15 points on five 3-balls) led the charge down the stretch, while Guillermo Pimentel connected on a big triple late to help seal the deal.

The two teams will get to duke it out one more time this season on Friday, January 31. This time, it will be the Witches who host.

“It was a great atmosphere and both teams played well,” said Witches’ head coach Tom Doyle. “(Salem Academy) played really well, and everyone that got in played hard and contributed.

“We knew they had Ali (Kachmer) — (who is averaging a double-double with 19.2 points and 11.1 rebounds) — so we tried to focus on limiting him, but other guys stepped up. I was really impressed with their whole team; we’re looking forward to another competitive battle at our place.”

Betts hopes the cross-city clash will be the first of many for the two schools. In addition to the looming tilt later this month, Betts says they already have two baseball and two softball games scheduled against Salem High this spring. Next winter, they hope to have the girls hoops teams compete as well — and likely soccer and other sports will be forthcoming, too.

“I had talked with (Salem High athletic director) Scott (Connolly) and while there’s a big gap in terms of the size of the schools, with us having a pretty strong senior class we thought it would be a good chance to play each other,” said Betts. “It worked out great and hopefully it will be something we can continue to do.”

Hamilton-Wenham certainly struggled out of the gate this winter en route to a lackluster 1-5 start. They were playing hard and tough, but their youth and inexperience came into play too often as the Generals suffered from simple mistakes and a high amount of turnovers.

Lately, however, they’ve seemed to have found a groove — and with that, a nice little three-game win streak to climb back into tournament contention.

Hamilton-Wenham began its spree with a surprising 57-53 triumph over Malden, followed by a sound victory over Cape Ann League rival Triton (56-51), and then put a loud stamp on its win streak by upending previously unbeaten Manchester Essex in overtime last Friday, 76-75.

The latter triumph was undoubtedly the most impressive of the three, as the Generals erased two double-digit deficits in the second half to force overtime against the Hornets before eventually walking away as victors.

“The crazy thing was (Manchester Essex) made 10 3-pointers and went 19-for-22 from the free throw line — and we still won,” said Generals’ head coach Mike DiMarino.

“The kids just play for each other. They don’t care who scores; guys on the bench are always into the game, jumping up and down. It’s just a great team atmosphere.

“We didn’t panic,” added DiMarino, “and especially in that kind of atmosphere — I mean it was a packed house, they were 7-0 coming in and a great team — the kids are just growing up right in front of me.”

Speaking of a full team effort, Hamilton-Wenham showed it in the boxscore as five different players reached double figures against the Hornets. Markus Nordin led the way with 17 points and seven boards; senior Ian Coffey went for 16 points and hit some clutch triples in the second half; his brother, Carter Coffey, also dropped 16 points; Ryan Hutchinson had 15 points and the game-tying steal and coast-to-coast layup before the regulation buzzer to force OT; and Ryan Monahan scored 12 points and snared 11 rebounds.

DiMarino also got strong contributions off the bench from big man Will Jones and a pair of juniors, Ethan Dwyer and Brendan Alverry. It was a season-altering type win for the determined Generals, one that should give them plenty of confidence moving forward.

“I told the kids it was the best birthday gift I could get,” said DiMarino, who celebrated another year on Monday. “The locker room after was great: everybody celebrating and having a good time, the coaches getting into it. It was just cool to all huddle up in the locker room and talk about where we started this year and how far we’ve come every game since.”

The celebrating is done for now, however, as the Generals now turn their focus to their next big test: a road tilt at Pentucket Tuesday evening.

The Big Blue were without standout guard Andrew Augustin in that contest as he battles an injury.

Swampscott (4-4) remains in the thick of the playoff hunt, with arch rival Marblehead and North Andover on tap this week.

Lynn English has been blowing out each and every Northeastern Conference team in its path this season. Its only losses have come against a powerhouse from South Dakota (Yankton) and one from Connecticut (East Catholic). The Bulldogs’ dominant conference wins have come over Saugus (95-49), Peabody (101-30), Salem (93-34), Winthrop (93-13) and most recently, Danvers (84-43).

However, the Falcons’ effort against them may have been the most encouraging one yet for an NEC squad. While the 41-point loss is a large margin on paper, it’s the slimmest spread among the other four NEC teams to take on English.

Danvers trailed by only 16 at halftime and got strong play out of big man Max Beuvelet (7 points, 10 rebounds), who was going up against some big Lynn English bodies in the post. Sophomore Jared Berry also showed up, going for 13 points, five rebounds and two assists.

The loss puts Danvers at 3-7, but the majority of its losses have come by single digits (Manchester Essex by 9, Bishop Fenwick by 8, Gloucester by 3 and Swampscott by 2). They face a tough road ahead this week with home bouts against Beverly and Salem, and will certainly have their work cut out for them if they want to make it back to the state tournament for the second straight season.

Essex Tech’s big men continue to get it done on the glass. Despite losing to Shawsheen, 56-47, last week, the Hawks grabbed 45 rebounds as a team. Thurston Blaisdell was once again a monster in this one, snaring a team-best 20 boards, while senior Max Doherty crashed the glass with a purpose as well to the tune of 15 boards.

Weekly check in on Gordon College senior guard Eric Demers. The 6-foot-2 sharpshooter continues to lead the nation scoring at a clip of 33.8 ppg. He’s got a comfortable 3.7 points per game lead over the next player on that list (Marcus Dempsey of Muskingum). Demers scored 31 and 32 points in his last two games, respectively, and his scoring average actually dropped.

Speaking of Gordon, the Scots and North Shore rival Endicott may have played the game of the year last week. Knotted at 86 with time running down in overtime, Gulls’ big man Matt McDevitt was given two free throws after Gordon’s Parker Omslaer was called with an over the back foul. McDevitt drilled both of them to lift Endicott to a thrilling 88-86 victory.

The contest was back and forth throughout, with neither team ever gaining a significant edge. However, it was the play of Endicott senior and former Hamilton-Wenham standout, Jimmy Campbell, that gave the Gulls a much needed boost in the second half. Campbell scored 10 points on 5-of-6 shooting, grabbed seven rebounds, had a steal and dished out an assist in just 11 minutes on the court. One of team’s premier leaders, Campbell had appeared in just seven games this season and has averaged 5.5 minutes per game for his career.

But the 6-foot-3, 210-pound senior was ready to play and ready to contribute as he always is, helping the Gulls to an important conference win.

“Jimmy had some injury issues unfortunately and he had a season ending thing his freshman year; he’s just kind of battled some unfortunate luck,” Gulls’ coach Kevin Bettencourt said of Campbell earlier this season. “But he’s one of our best leaders. The guys absolutely love him, he comes to practice every single day and just loves basketball. He can really help us in some spots, too. I think he’s kind of the leader of our team behind the scenes and just an absolute huge asset to our program. He kind of sees the game like a coach and he’s really helping us every day.”

Endicott is now 10-4 on the year and will take on Curry Wednesday.

1. Beverly (7-0): The unbeaten Panthers certainly have Saturday, January 25 circled on the schedule — that’s when they’ll take on also undefeated Lowell (9-0) on the road in a big test.

2. Bishop Fenwick (6-2): Three of the Crusaders last four games have been decided by three points or less, with Sunday’s win over Peabody (43-32) being the only anomaly.

Full Court Press is a weekly high school basketball column that runs every Tuesday in The Salem News during the winter season. Contact staff writer Nick Giannino at NGiannino@salemnews.com and follow him on Twitter @NickGiannino_SN.