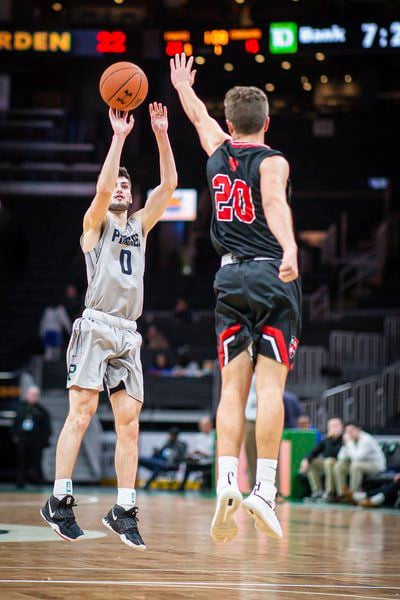 David H. Goff/photo. Pingree’s Dillon Smith let loose plenty of shots like this during Saturday’s win, canning five triples in total on his way to a game-high 25 points. 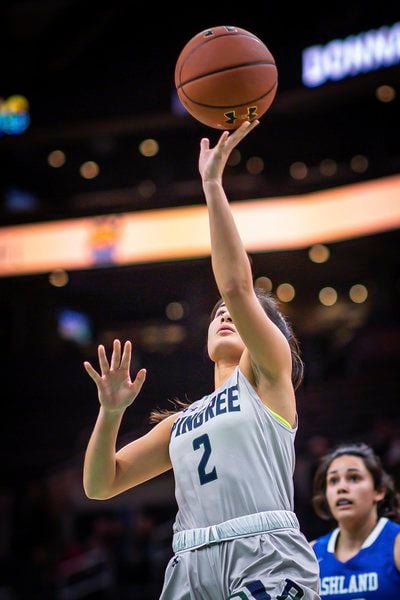 David H. Goff/photo. Pingree's Kendall Traveis lays on up during her team's win over Ashland at TD Garden on Saturday. 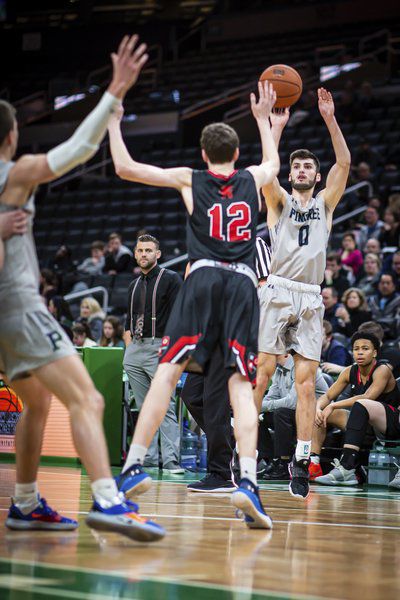 Pingree’s Dillon Smith cashed in on five triples Saturday night to help his team to victory at TD Garden. 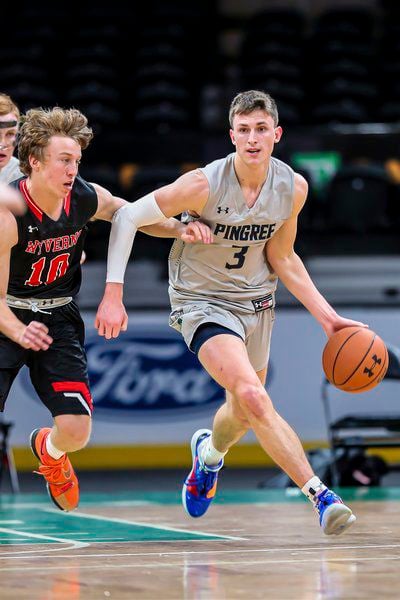 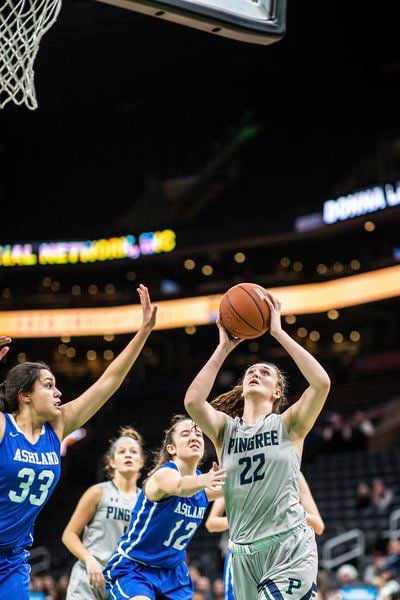 David H. Goff/photo. Pingree's Abbey Skinner goes up for two points in her team's win over Ashland at TD Garden on Saturday. 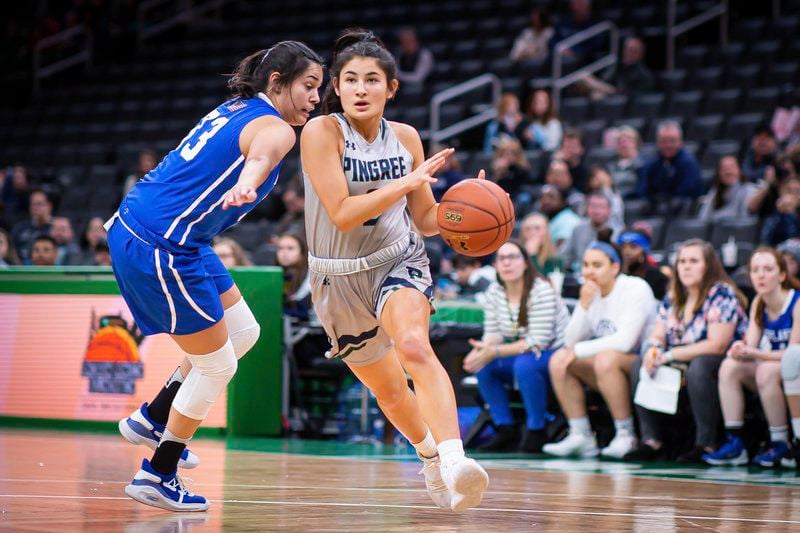 David H. Goff/photo. Pingree's Kendall Traveis drives the lane during her team's win over Ashland on Saturday at TD Garden. 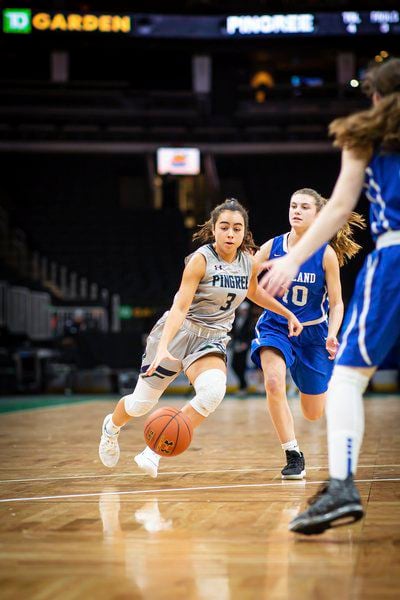 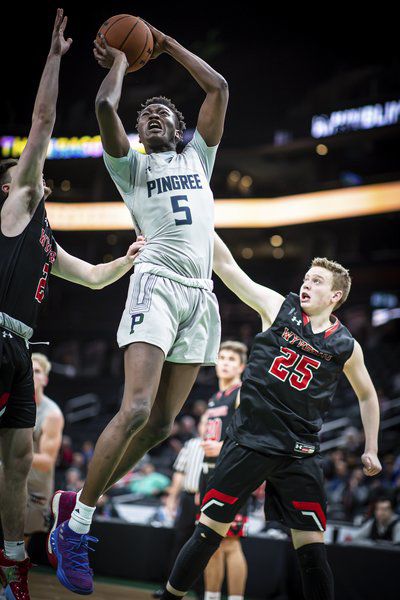 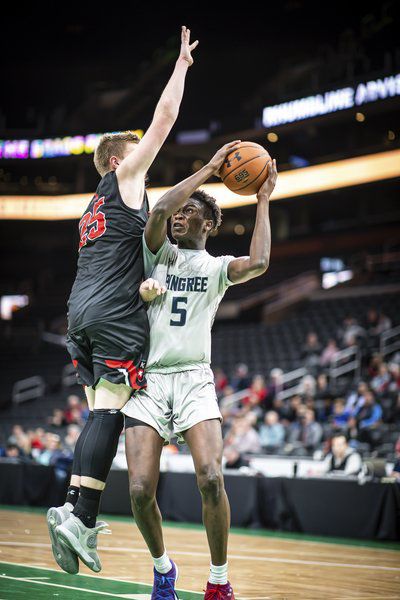 David H. Goff/photo. Pingree’s Cleto Chol tries to muscle his way to the basket against Kingswood Oxford on Saturday night. 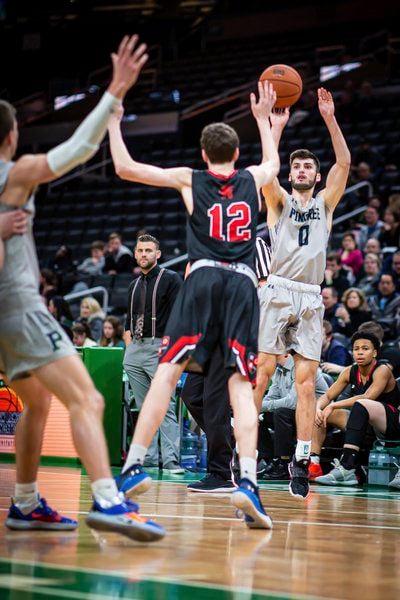 David H. Goff/photo. Pingree’s Dillon Smith let loose plenty of shots like this during Saturday’s win, canning five triples in total on his way to a game-high 25 points.

David H. Goff/photo. Pingree's Kendall Traveis lays on up during her team's win over Ashland at TD Garden on Saturday.

Pingree’s Dillon Smith cashed in on five triples Saturday night to help his team to victory at TD Garden.

David H. Goff/photo. Pingree's Abbey Skinner goes up for two points in her team's win over Ashland at TD Garden on Saturday.

David H. Goff/photo. Pingree's Kendall Traveis drives the lane during her team's win over Ashland on Saturday at TD Garden.

David H. Goff/photo. Pingree’s Cleto Chol tries to muscle his way to the basket against Kingswood Oxford on Saturday night.

BOSTON — I’m willing to bet that every Boston Celtics fan remembers their first time at TD Garden. If you’re not a hoop head, maybe it’s your first trip to Fenway Park or Gillette Stadium that stands out.

Regardless of the sport or the occasion, it’s always a special feeling entering the same arena your favorite team competes at every season ... the same arena you watched them play at on TV time and time again.

Now imagine if instead of simply sitting in the bleachers cheering on your favorite team, you’re actually on the court competing. It’s an experience not many people get to relish — especially at the high school level.

But Saturday evening in Boston, eighteen different high school basketball teams, including the Pingree boys and girls squads, laced ‘em up for a competitive day on the TD Garden parquet. Hull, Abington, Belmont, Pembroke, Scituate, Hingham, Norwell, Hanover, Waltham, Weston, Somerville, Algonquin, Acton-Boxboro, Lawrence, Kingswood Oxford and Ashland were among the other schools to take part in the special event dubbed the Andrew Lawson Foundation Invitational, with the latter two serving as opponents to the Pingree boys and girls teams, respectively.

It was clear that many of the young players were in awe just to be standing on the historic hardwood, and by the time the games were finished, many still had smiles on their faces as they reflected on the memorable day with their friends, teammates and family.

“It just felt really different than anything else. From when I first walked out seeing behind the hoop that there’s no wall or anything, the depth perception was something I hadn’t really experienced before,” said Pingree sophomore big man Cleto Chol.

A Salem native, Chol turned in a strong effort in the Highlanders’ 63-47 win, grabbing a game-high 11 rebounds to go with 11 points and a couple of assists. But it was his second-half dunk in the lane that he’ll likely remember most.

“One of my teammates, Harrison (Latimer), his mom told me (Friday) when we were at our pasta party that she better get a dunk out of me at TD Garden,” Chol said with a big smile. “That was actually my first dunk of the season, which is embarrassing I know.”

Jokes aside, the dunk was a great moment. So was Felix Kloman’s Air Jordan-esque poster slam over a Kingswood player earlier in the game. The senior standout drove baseline and elevated up and over the defender, throwing down a vicious one-handed jam that immediately had the crowd on its feet. The dunk was called back however as Kloman was whistled for a charging foul.

“Yes, it was absolutely a clean charge,” a trio of Kingswood players said lightheartedly when asked about the play after the game.

“We game plan for it. In the past shot blocking was not our thing and we’ve definitely gotten a couple of $5,000 fines for flopping,” joked Kingswood coach Brad Seaman. “Because we have to find a way to protect the rim and it’s not always meeting that player at the rim.”

The rest of the game was excellent, too. Pingree built an early lead and continued to separate themselves behind the hot shooting of Dillon Smith (25 points including five triples to go with four rebounds, an assist and two steals). Every player on the varsity roster saw the court, and to walk off with a win was certainly the icing on the cake.

“It’s just such a privilege to play here and I just thought of my game that I played hardest this year and I was like, ‘you have to play even harder,’” said Smith. “This is a once in a lifetime opportunity.”

As I touched upon in Monday’s newspaper, the event was organized by Pingree boys coach Steve Gibbs to honor the late Lawson, who passed away from cancer in 2018 at the young age of 27. Lawson had down syndrome but never let his disability effect him and clearly lived life to the fullest.

He was a part of the Norwell High basketball and soccer teams and a daily inspiration to everyone he crossed paths with.

“If you were around him he just resonated with positive energy and encouragement,” said Gibbs. “He broke the lines and became a person who, in spite of his condition, was part of the fabric of a varsity basketball team and a varsity soccer team. To him, he felt that he had so much to offer and to be able to play with our wonderful team at an event baring his name meant a lot to us.”

Pingree moved to 6-6 on the season with the win in Boston and will now enter the meat of their schedule as they look to make a push for NEPSAC tournament qualification.

Usually this is strictly a boys basketball column, but I’d be remiss if I didn’t mention the Pingree girls experience at TD Garden as well.

The Highlanders picked up a 52-37 victory over Ashland, but again, it was the overall experience of playing on that court that stood out. The best part of Pingree’s nightcap triumph came at the end, when longtime team manager Sammy Gibbs, who has down syndrome, was subbed into the game and scored a bucket. It was a special moment for a young woman who means so much to the Pingree program and has been with the current group every step of the way.

“I would just like to say wow,” Sammy Gibbs said in a press conference following the game. “I’m actually on the court where the Celtics and Bruins play, oh my gosh.

“My thought process was like, ‘oh wow, I have to go on already. OK, let’s do this thing’,” she added. “I just thought OK, I’m going to go out there with my cousin Savannah (Gibbs) and she’s going to hand me the ball and I’m going to shoot it.”

That she did, banking it home as her teammates congratulated her on the floor.

Previously undefeated Beverly had its biggest test this past weekend when it traveled to also unbeaten Lowell on Saturday afternoon. While they didn’t get the win, the Panthers battled admirably against a great team in their own gym.

Beverly was up by three points after one quarter and trailed by just six at the half. But a rough third quarter saw Lowell make its push on the way to a 72-52 victory. According to Panthers’ head coach Matt Karakoudas, Lowell got hot after the break and it was the third frame that ultimately decided the contest. Beverly actually tied their opponents in scoring in the fourth, but the lofty deficit proved too much to overcome.

Duncan Moreland continued to show why he’s one of the top talents in Division 2, scoring 20 points and grabbing eight rebounds in the losing effort. Nobody else reached double figures in the scoring column for Beverly. The Panthers face another good test on Tuesday when they travel to league rival Lynn Classical, while February 12th’s highly anticipated bout with Lynn English is inching closer and closer as well.

Hamilton-Wenham continues to roll. The Generals have now won seven straight games as they gear up for a challenging week with tilts against CAL powers Newburyport (Tuesday night at H-W) and Manchester Essex (Friday night back in H-W).

“I’m just proud of the kids to put themselves in this position after such a rough start,” said head coach Mike DiMarino. “This is a fun group to coach.”

Nice game for Danvers’ sophomore Jared Berry in last week’s close setback to Saugus. The shifty guard dropped 21 points and snared 11 rebounds in a 59-50 defeat, this coming just days after he scored 24 in a loss to Marblehead. Berry is now averaging a team-best 16.5 points per game to go with 2.6 assists.

1. Beverly (10-1): The Panthers will look to get back in the win column after their first loss of the season when they head to Lynn Classical on Tuesday.

2. Pingree (6-6): The Highlanders’ record may not stand up to some of the other teams in the area, but their win at TD Garden was wildly impressive and they deserve a spot on this list.

3. Hamilton-Wenham (8-5): The Generals keep on winning; no need to remove them from the rankings this week.

Full Court Press is a weekly high school basketball column that runs every Tuesday in The Salem News during the winter season. Contact staff writer Nick Giannino at NGiannino@salemnews.com and follow him on Twitter @NickGiannino_SN.