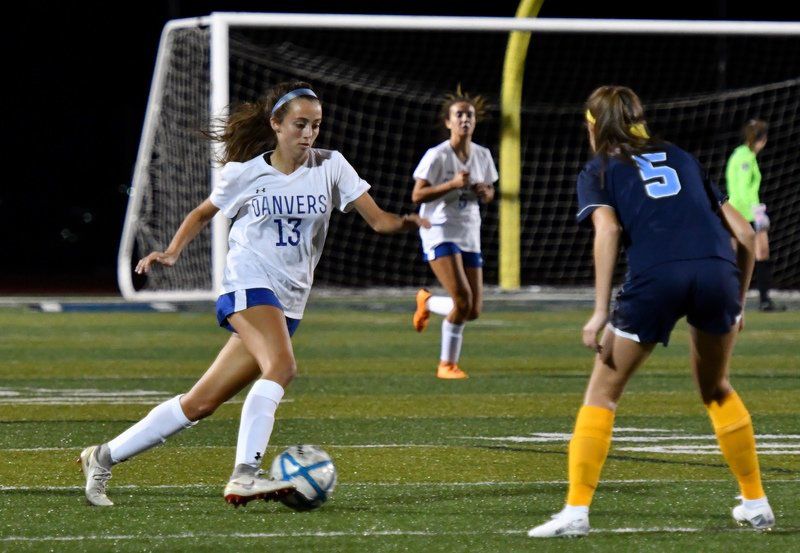 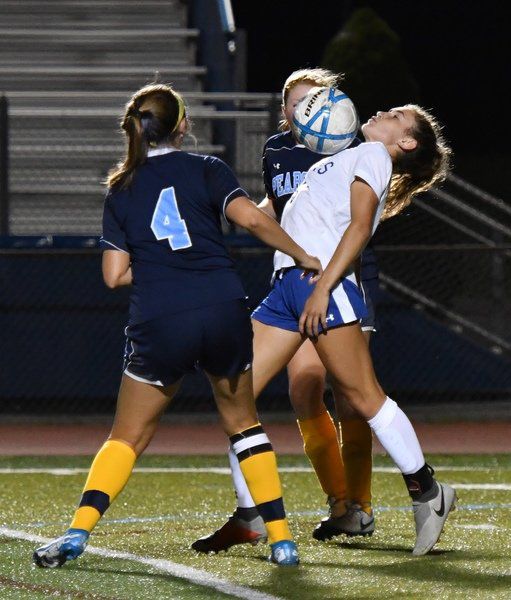 Arianna Bezanson of Danvers wins a 50/50 ball with a pair of Peabody midfielders bearing down. Rose Raymond photo 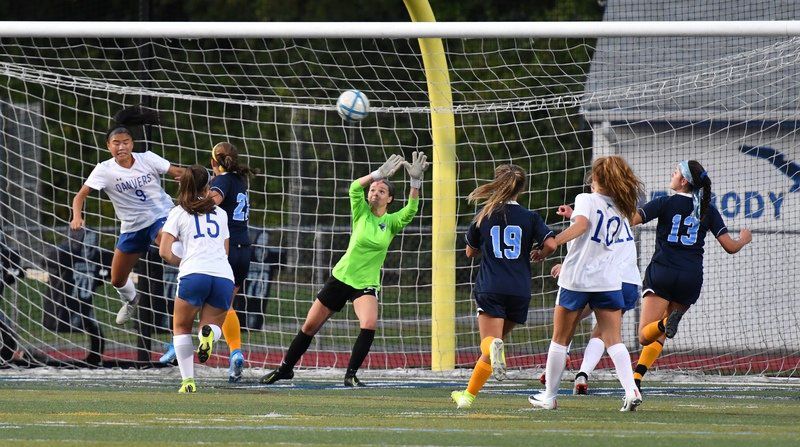 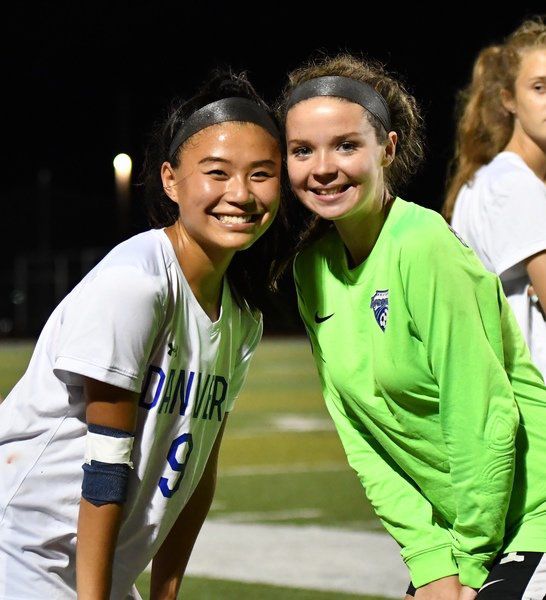 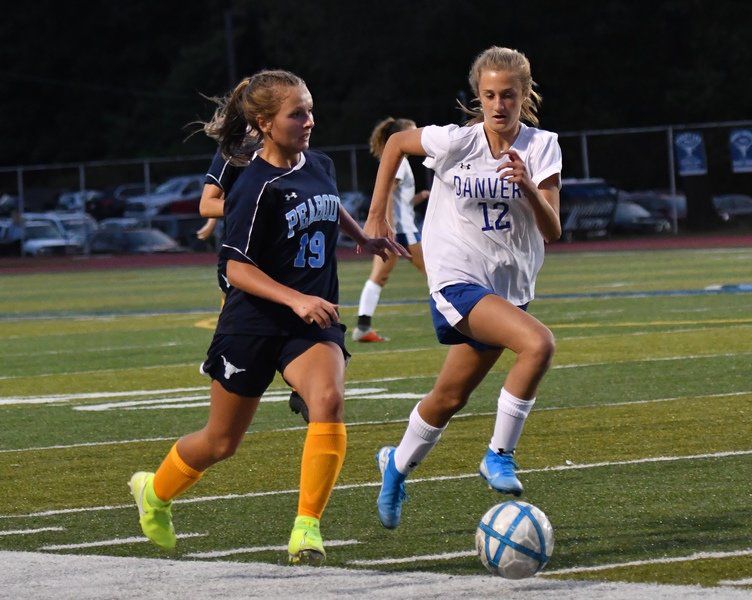 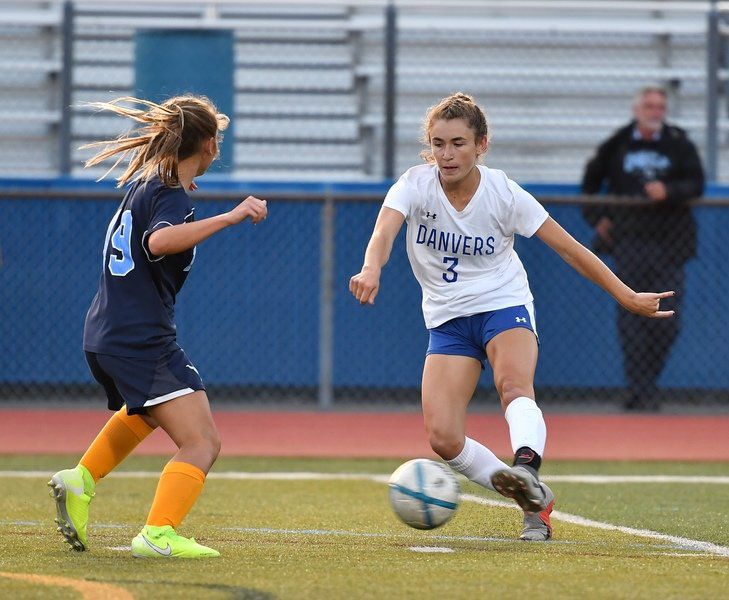 Arianna Bezanson of Danvers tries to get by Peabody’s McKayla Fischer. 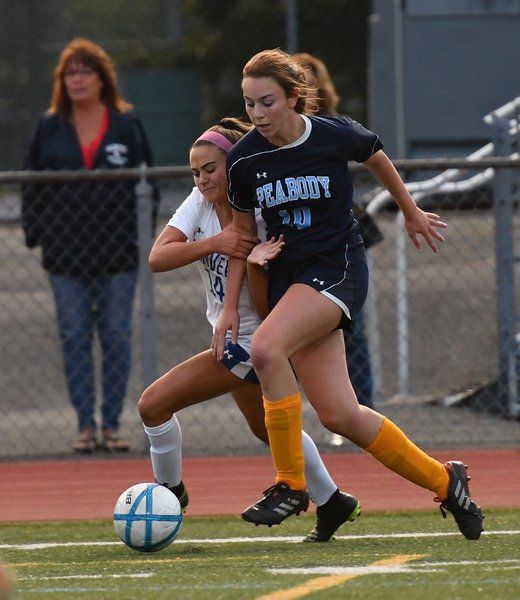 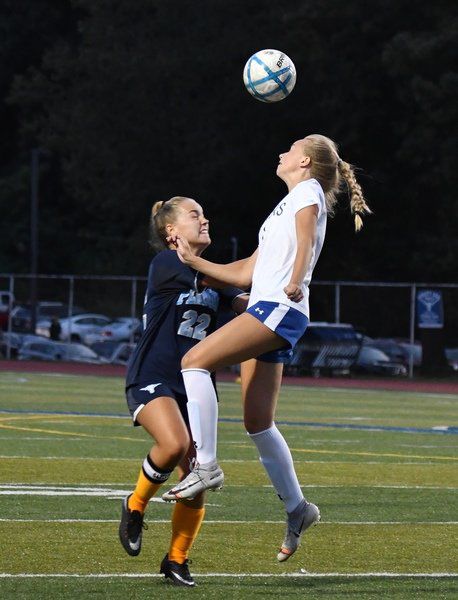 Arianna Bezanson of Danvers wins a 50/50 ball with a pair of Peabody midfielders bearing down. Rose Raymond photo

Arianna Bezanson of Danvers tries to get by Peabody’s McKayla Fischer.

Junior Riley DiGilio scored the first goal of the year only three minutes after the opening kick and the Falcons’ girls soccer team played nearly flawless defense in a 2-0 win over Peabody at Coley Lee Field.

Senior captain Abby Cash scored the game’s other goal at the 54-minute mark, just about midway through the second half. Just moments after a gorgeous give-and-go pass between Cash, Livvi Anderson and Reese Pszenny hit the post, Cash came loose on a similar play and finished for the multi-goal advantage.

“It’s early in the year so there aren’t really set plays, but they have a lot of tools where they can run with what they see out there,” said Danvers head coach Jimmy Hinchion. “That second goal was huge. We have a lot of our offense back from last year and that’s definitely one of our strengths.”

For the Tanners (0-2), allowing a gifted striker like DiGilio an open look at the net so early in the game was a disappointing lapse.

“It’s like playing off a great 3-point shooter — you give them that much room they’re going to bury it,” said Peabody head coach Dennis Desroches. “One of our keys coming into the game was to mark tight early, and we didn’t. We were sagging (defensively).”

Play leveled off after the Falcons grabbed the early lead, but each time Peabody’s young forwards got any momentum running towards the Danvers net there were midfielders or defenders there to knock the ball away.

Senior captain Becca Rocker did a great job controlling the flow of play for the visitors while Arianna Bezanson, junior Julia Vaillancourt and junior Mi Jordan also played well in the middle. Defensively, senior Sam Pelletier broke up several good chances in the box, and Danvers keeper Kylie MacCormack made a half-dozen saves for her first shutout of the year.

“Our three mids were fantastic. We ran some different girls in there to get some experience, but they all distributed the ball well and played with composure,” said Hinchion, who was pleased with the discipline his team showed in giving the dangerous Tanners zero corner kicks and only a couple of directs.

“We used our skill very well and used combinations all over the field.”

On the opposite end of the spectrum, Peabody is looking for a more complex offensive approach after being blanked in back-to-back outings. Granted those came against the defending champions of the Merrimack Valley Conference (North Andover, 3-0 on Saturday) and Northeastern Conference — two of the better leagues in Eastern Mass. — but the Tanners still need to be better up top.

“We’re not moving away from the ball and that has to change against good opponents,” said Desroches. “You need those diagonal runs, multiple touches towards the goal — we need to be proactive rather than reactive.”

Goalkeeper Shelby Doucette had a great game for Peabody, making 10 stops including on point-blank in a Pszenny bid early in the second half. Fellow captain Colleen Crotty did an admirable job anchoring the Tanner defense.

“Colleen had a great game; no fouls given against a team as strong offensively as Danvers says a lot about the way she played.”

Bridget O’Connell had a few nice runs for the Tanners while Aja Alimonte and Ava D’Ambrosio had a couple of shots on goal each. Amber Kiricoples also played well at both ends for the hosts.

Danvers, which is now 5-0-1 in its last six meetings with the rival Tanners, goes right back into the fire Wednesday night for its home opener against unbeaten Beverly High (2-0).

“We have some new faces, so there are bound to be mistakes and things to work on,” Hinchion said. “Overall, it was a great effort. A hard-earned win that came at a tough place to play. Anytime you can win here, you’ll take it.”