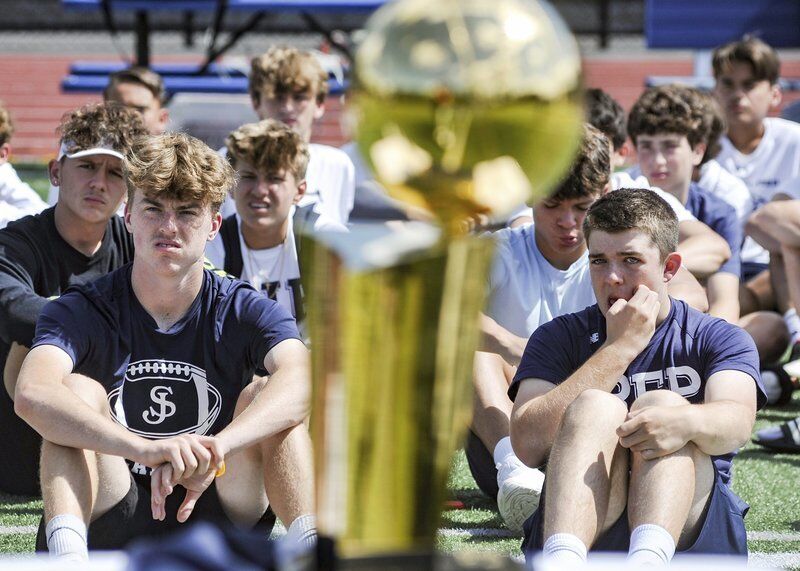 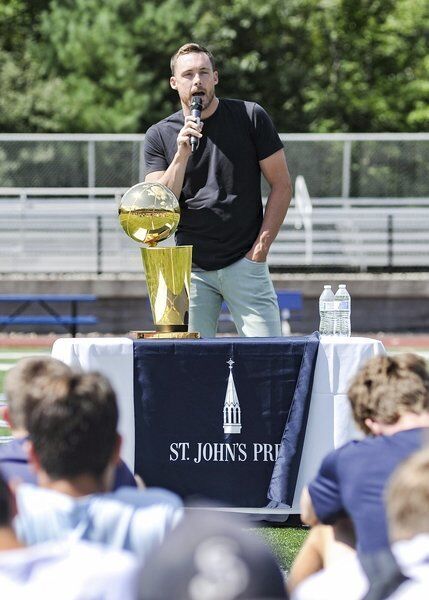 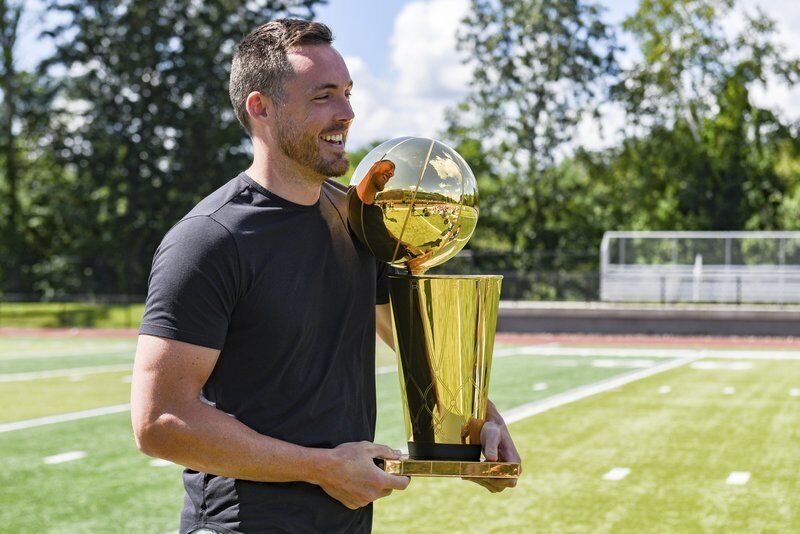 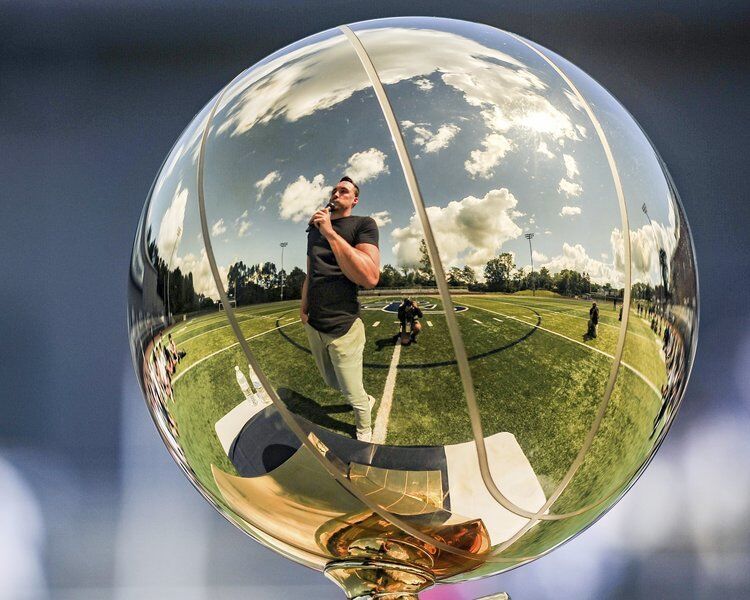 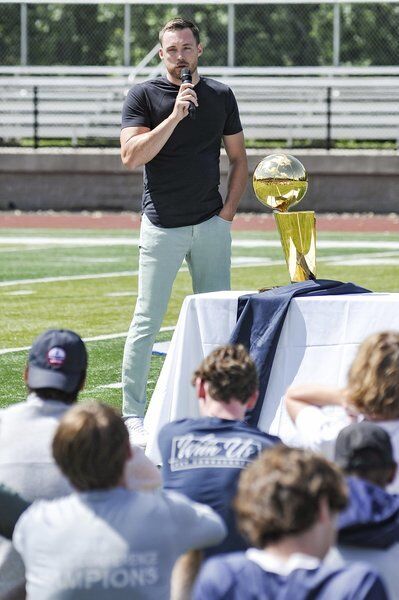 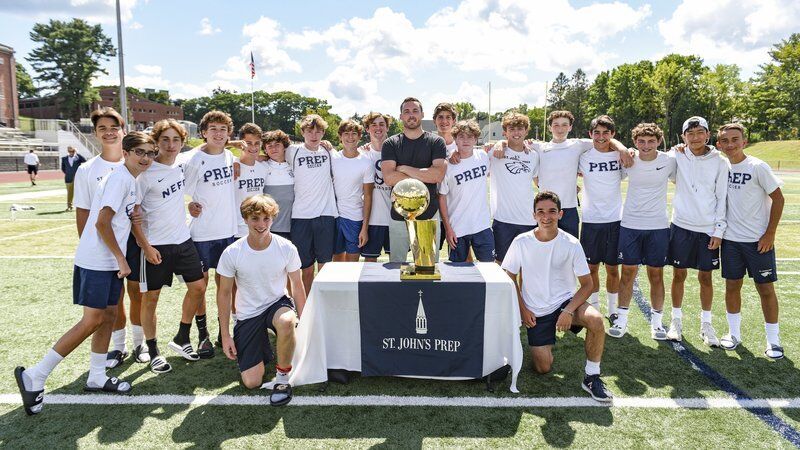 DANVERS -- Every individual on this planet has the same 24 hours in each day. For Pat Connaughton, it's what you do in those 24 hours that allows you to follow the pathway to success.

Connaughton -- a 2011 graduate of St. John's Prep who helped the Eagles bring home their first ever basketball state championship -- returned to his alma mater on Friday afternoon to offer that message along with many other words of wisdom for the school's current student athletes.

After helping the Milwaukee Bucks bring home their first NBA championship in 50 years this past July, Connaughton has now reached the pinnacle of professional sports. But it wasn't too long ago that he was in those current students' shoes, and he knows all too well what it takes to thrive in whatever passion you choose to pursue.

"I was once these kids, I was in their seat," said Connaughton. "I never had a tie to pro sports. It wasn't like I was destined to be a pro athlete at any point in time. (I want) to show (the current students) and try to inspire them that whatever their dreams, passions or goals may be, they can accomplish it. It's just a matter of what they're doing on a daily basis and how they're utilizing those 24 hours in a day. Hopefully they're able to take those messages from somebody who was in their position."

Since capturing that championship title with the Bucks six weeks ago, Connaughton has certainly been busy. But returning back home to where it all started, whether that be in his hometown of Arlington or on campus at St. John's, is something he always cherishes. This time around, it was arguably more special than ever.

Connaughton didn't come empty handed. He brought the Larry O'Brien Trophy with him, displaying it in front of staff and students on a sunny day at Glatz Field. After speaking to those students and fielding a handful of questions, everyone in attendance was able to meet Connaughton, shake his hand and take a photo with him and the trophy.

Those 45 or so minutes were undoubtedly memorable for all those involved, but perhaps nobody had a bigger smile on their face than Connaughton himself.

"It started here. I owe a lot of the success that I had to St. John's Prep and the people and the community it breeds," he said. "So to be back here at this beautiful facility and to see the kids and the access that they have and the foundation the Prep gives them to have success in this world ... I just hope the kids that are here take advantage of it while they're here because it does make a big difference as you move forward."

Throughout his speech, Connaughton shared personal stories and bits and pieces of his journey. One of the more prominent excerpts came right out of the gate, as he talked about his two-year journey towards dunking a basketball. Believe it or not, the now 6-foot-5, 210 pound athlete was once a short, chubby sixth grader working his tail off in his backyard to reach his goal of throwing it down; and by eighth grade, he was able to do just that.

"As a short, little chubby kid that's not really a dream that you think is that achievable. But my dad told me that you have to work at it if you want to have a chance," explained Connaughton, who at the time spent hours each day jumping up and down with a weighted vest to build his leg strength.

"Fortunately I grew a little bit from sixth to seventh and seventh to eighth grade, but the thing I did most was I worked at it. That's one of the things I want to leave you guys with today."

Connaughton went on to talk about the importance of playing more than one sport growing up and staying well rounded. After all, he was a pretty darn good baseball player, too.

He talked about having a strong work ethic, putting your team first and building leadership skills. He repeatedly stressed the importance of time management while touching upon what it takes to succeed under pressure or in unexpected circumstances.

Amidst all of the life advice, Connaughton still made time to speak about his experience winning an NBA title and what it meant to him. Fittingly, he actually compared it to his championship winning season a decade earlier back at the Prep.

"I think it's kind of similar to when we won the state title here in 2011 as far as in that moment the confetti comes down, you get to hold the trophy, you're there with your team and you know you won," said Connaughton. "But it gets even better as time goes on because nobody can take it away from you. You're able to look at it and share that moment with your teammates and say, 'Hey, we're the 2021 NBA Champs. No one's going to take that away from us. We did it; we accomplished it and we ended the season with a victory which only one team can say they did.' So I think that type of etched in stone history kind of makes it more surreal."

Connaughton and the rest of the Bucks will head to teammate Giannis Antetokounmpo's homeland of Greece in a few weeks for what he called a "team building" trip. Then, they'll embark on a new season with aspirations of reaching that peak of the basketball world once more.

But as he continues to learn, grow and strive to get better both on and off the court, Connaughton will always make time to return home to the place that helped shape him into the man he is today. And that right there is something that can never be taken away from him.