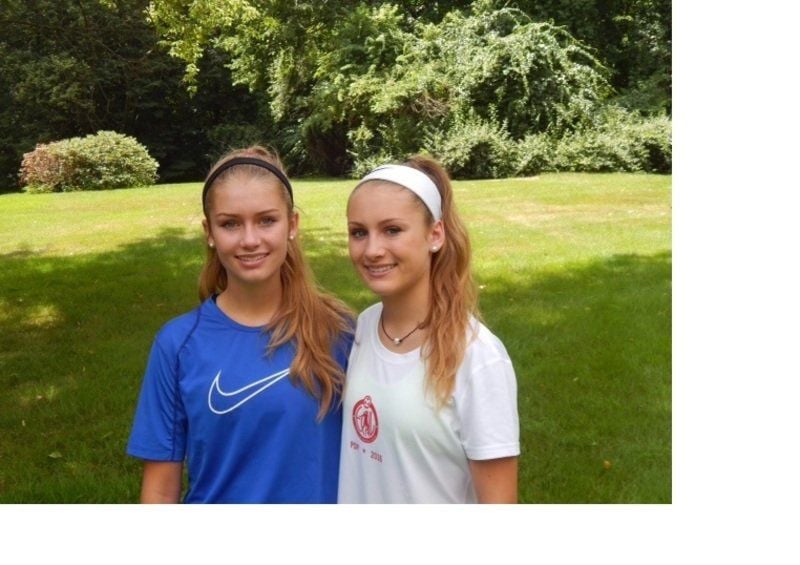 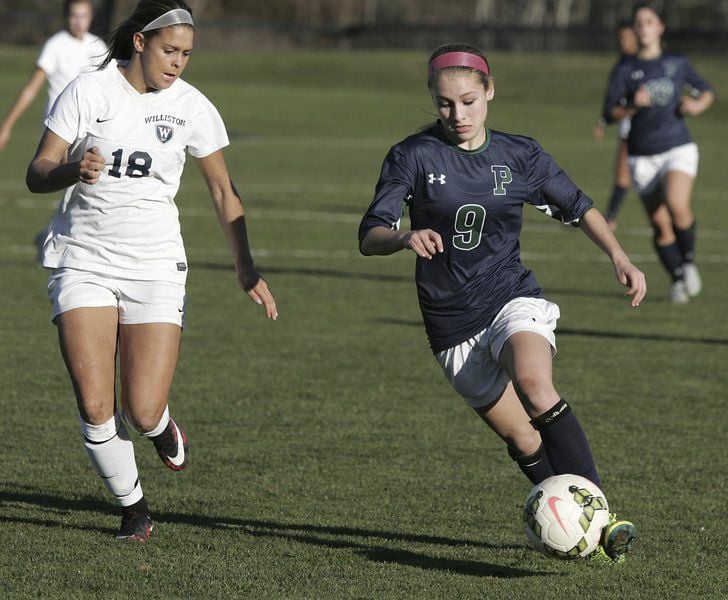 Pingree soccer player Nina Dooley and her sister Porter will be playing in college at Northeastern. Staff file photo.

Pingree soccer player Nina Dooley and her sister Porter will be playing in college at Northeastern. Staff file photo.

Fraternal twins Nina and Porter Dooley do a lot of things together, and one of the most important is playing soccer.

The rising sophomores from Hamilton enjoy being on the same teams, so it’s no surprise that they’ll be doing it at the next level following their high school days at Pingree.

This week the pair verbally committed to play soccer at Northeastern University on scholarship. They will be reunited with former Pingree teammate Kerri Zerfoss of Peabody, who is about to start her freshman year for the Huskies.

“It happened quickly, but we were fortunate to have our coaches prepare us for college exposure,” said Porter Dooley, an attacking midfielder. “Still, it’s really surprising to already know where we’ll be playing in college.”

Nina Dooley is a striker who led the Highlanders in assists and was third in goals scored on an offensively talented squad last season. She was also one of the leading scorers in the Elite Clubs National League.

The twins began playing in their town’s youth program, then moved to club level eight years ago.

“Porter and I are really close and we’ve been playing soccer together for the past 10 years,” said Nina. “Our Dad played in college, and because of him we discovered a love for the game pretty early.

“Northeastern is home to us, and offers a great balance between Division 1 athletics and a strong academic program. We’re excited that we’ll be together; it’s nice knowing Kerri is there, too.

“We have been very fortunate to have great coaches here on the North Shore. We trained regularly with Mo Keita as SkillzCheck Academy the past four years to further our technical skills. Doc Simpson, our coach at the Pingree School, also coached us in club soccer when we were 12. Both are great and have helped us with different aspects of our game.”

The twins played for FC Boston in the spring and went all the way to the national quarterfinals in Oceanside, Calif. recently. They plan to play for FC Stars next year.

“In my opinion they’re two of the best players in New England right now,” said Simpson, who is also assistant coach of the Boston Breakers and NLFC/Breakers North Shore director. “Nina is a dynamic striker who is excellent on and off the ball. She is also advanced technically and has the work rate to match. This year she was one of the leading scorers in the ECNL, which is the best league in the country for girls.

“Porter controls the game from the midfield position. She’s a fierce competitor, which is why she was so highly sought after. (She’s) by far one of the most complete players in the country.”

Nina said she has moved around up top, and is now comfortable with her back to the goal. She looks for Porter, knowing where she’lll be on the field.

Zerfoss and Charlotte Esty, who is now playing at Dartmouth, were terrific goal scorers the Highlanders, leaving big shoes to fill this coming season.

“We lost some very good players, but things look good for this season especially with the addition of Holly Stam in goal,” said Porter. “I love scoring goals, but my position is more about transition and getting the ball up. Nina and I work hard — and we both hate losing.”

Keith LeBlanc, manager of the Peabody Senior Softball state championship team, thinks his team should do well in the regional competition that begins Saturday in Worcester. The local girls sailed through the playoffs unbeaten and take on the host team in the first game (1:30 p.m.).

Peabody is the Massachusetts representative in Pool A with the rest of the New England teams, while Pool 2 consists of Delaware, Maryland, New Jersey, New York, and Pennsylvania. The top three teams in each pool advance to playoffs Wednesday, July 27 when No. 2 faces 3. The winners advance to the championship games Thursday with a berth to the World Series in Delaware on the line.

“I think we have a good shot. What could be better than an all expenses paid trip to the World Series?,” said LeBlanc.

“We’ve been undefeated through the tournament, and last year the Woburn team that won the Massachusetts state championship went 3-1 at regionals and reached the semifinals. Our team is better than the team Woburn had last year, in my opinion. The No. 1 team in each pool has a huge advantage.

“If the girls are on their game we’ll do very well. We’ve had great pitching, hitting and defense so far. A lot of the girls went to regionals as Juniors two years ago. I want them to have fun and enjoy the whole experience while focusing on why we’re in this tournament.”

Mallory LeBlanc has been doing a terrific job in the circle for Peabody while Jayme Callum has caught most of the games. Caroline Kukas, Alyssa Alperen, Amanda Crawford, Kristina Rossignoll, Sydney Lowry, Kelsie Blake, Lexie Zammer, Callum and LeBlanc have all been coming up with big hits consistently. Others playing key roles are Jenna DeLisi, Alycia Gillen and Janine Goggin.

Jean DePlacido is a part-time writer and columnist for The Salem News. Contact her at jmdeplacido@aol.com