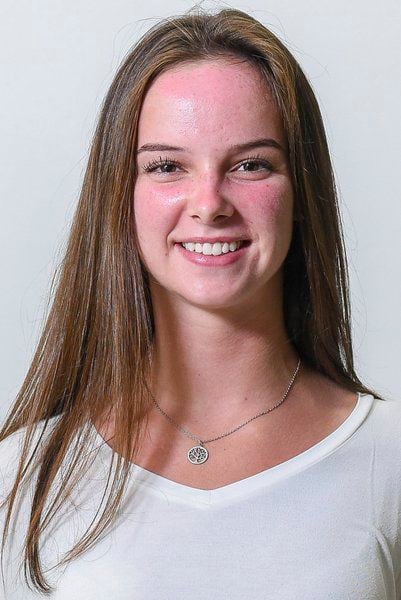 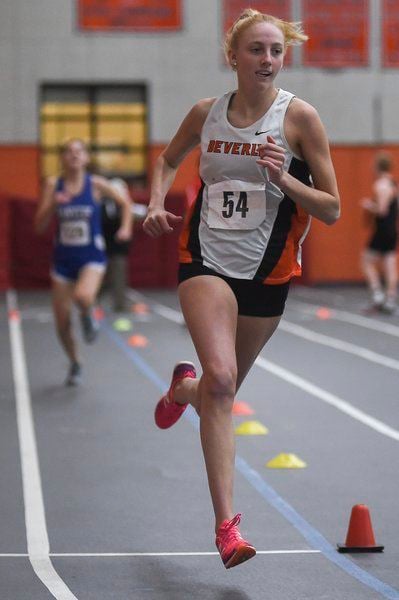 JAIME CAMPOS/Staff photo Beverly's Annie Towler is one of several Panthers that will be running in college.

JAIME CAMPOS/Staff photo Beverly's Annie Towler is one of several Panthers that will be running in college.

Coach Dave Jellerson’s Beverly girls track team is once again NEC champs with a perfect 7-0 record. This marks 19 of the 30 years Jellerson has been coaching that the Panthers have won the indoor title and he has a 229-12 record during that dominant span.

A year ago Peabody was NEC regular season champs, but Beverly has now won the league meet six years in a row. Three senior standouts will go on to run at Division 1 programs in college. India Ingemi has committed to Princeton, Annie Towler to Merrimack and Shelby DeGrenier to Bryant. Both Ingemi and Towler were soccer players and DeGrenier gymnastics before getting serious about track.

“It’s not where you start out, but where you finish,” said Jellerson. “Every track coach will tell you about a kid who comes out as a senior and loves it. That athlete wishes he or she had given track a shot earlier. Abbey Otterbein is a perfect example. She’s one who is now running in college (Bates) after coming out to get in shape for other sports, and found out track worked for her.”

The Panthers sprint medley team of Ingemi, Heidi Eberhardt, Ceirra Merrit, and Towler qualified for nationals which will be held in New York next month. The team did it by posting a time of 4:14.07 at the Division 2 state relays, coming close to the record of 4:10.07 set back in 1982.

Towler is an athlete who had been a soccer player for years, but came out for winter track in her freshman year, and loved it.

“I played soccer forever, almost since I could walk,” said Towler, who was fifth in the high jump at Division 2 states and on the fourth place 4x400 relay with DeGrenier, Eberhardt, and Ingemi. “I wanted to stay in shape over the winter, and found out I loved track. High jump is my favorite event (5-foot-4-inch personal record). It’s really cool to go to nationals. I’m excited to have a new experience like that.”

Towler’s older brother Tim was an outstanding lacrosse player at Merrimack and his sister never doubted she wanted to be a Warrior, too.

“Ever since Tim was there I fell in love with the college and community there,” said Towler, whose GPA is a bit higher than 3.0 and plans to major in business. “It’s small enough, but at the same time big, and the best thing is my mom cam come to all the meets. I looked at a couple of other colleges, but they just didn’t feel right.

“It’s been a very good winter,” said Jellerson. “The sprint medley team will go to nationals, and India will complete as an individual. She has the 55 meter indoor school record and the fastest 300 time. Towler has fought her way through injuries, and is really blossoming this season while DeGrenier is turning in some of the best times of her career now. At the Coaches Invitational her time of 1:40 in the 600 was a nice personal record.”

The final choice came down to Bryant and Bentley for DeGrenier, who did gymnastics for eight years before switching to track as a high school freshman. She has a 3.94 GPA and will major in accounting.

“I loved Bryant when I went there first in the spring of my junior year,” said DeGrenier. “When I met the team and saw all the great athletic facilities they have I was sure I wanted to go there.”

DeGrenier likes the 600 and 4x400 relay best indoors. Her main event outdoors is the 400 hurdles which is one of the most difficult to master, but when she tried it as a sophomore had immediate success.

For Ingemi it was always Princeton ever since it was the first school to recruit her. She applied early decision and was accepted. Ingemi will be making her third trip to nationals, but for the first time will have other Beverly girls and boys going with her. She had an outstanding D-2 Meet, winning the 55 meter dash in 7.38 and set a new meet record in the 300 (39.44), not to mention being on the relay team.

“I’m so excited to have teammates going to nationals, too,” she said. “I’ll run the 400 leg of the sprint medley relay and also do the 200. Normally indoors I run the 300, but other states have a 200 instead so my time has to be converted. I believe it’s about high 24 seconds.

“I never knew where I wanted to go to college, but Princeton was the first to reach out. i looked into it, and fell in love with the University. I talked to Brown, Northeastern, and Duke, but didn’t really have a second school. At first I thought I’d never get into Princeton (4.74 GPA), but then started to believe it could happen. If that fell through I’d look at the other schools. I’m so lucky I didn’t have to do that.”

Ingemi’s main event outdoors is the 400, but the versatile athlete, who played soccer for many years, also does the 100, 200, long jump, and all the sprint relays.

“It’s great that our high jump relay team set a new school record,” she said. “That’s was mostly Annie; she deserves the credit beacuse she carried us.”