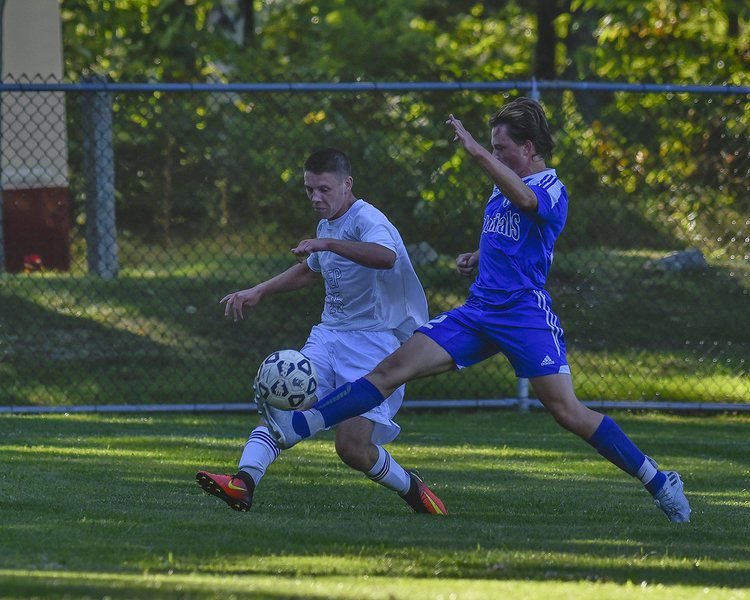 Sam Smith of St. John's Prep battles with an Acton-Boxborough player for ball possession in a 1-0 Eagles loss earlier this season. Since the set back against the Colonials, Smith and Co. have compiled a 9-2-1 record en route to capturing the the Catholic Conference title after failing to do so a season ago.  Rose Raymond photo 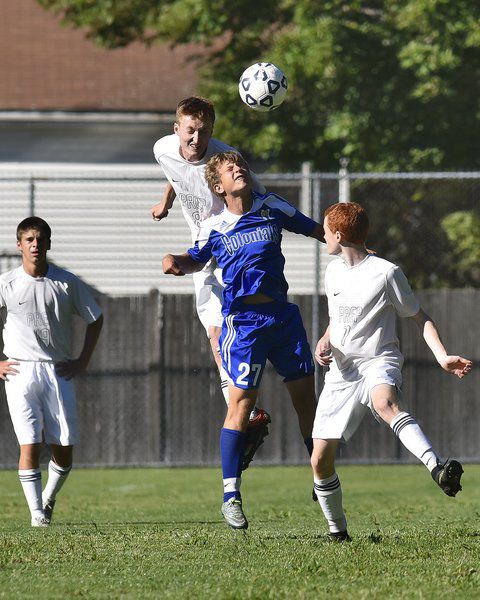 St. John's Prep captain Aidan Dooley leaps high into the air to head this ball in his team's favor yesterday against Acton-Boxborough. Dolley has been a paramount leader all season for the Eagles, who will took to gain some momentum heading into this year's state tournament.  Rose Raymond photo 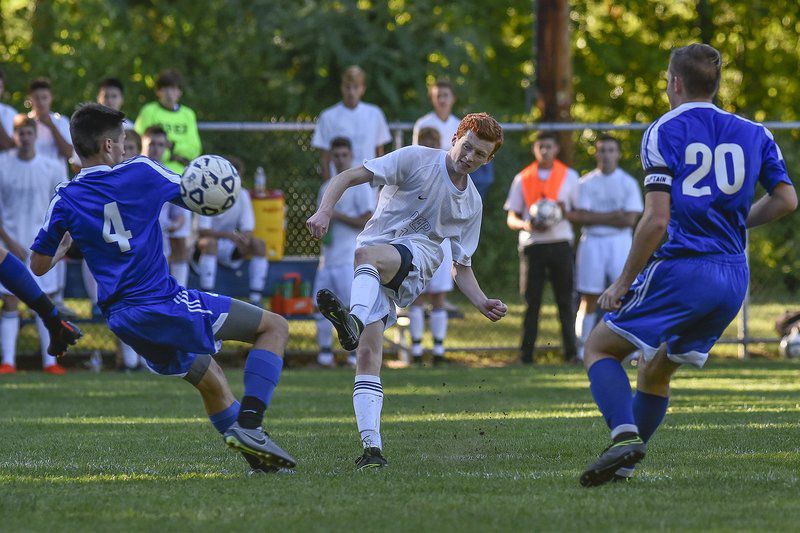 St. John's Prep junior midfielder Mitch Collins boots the ball between two Acton-Boxborough players during an Eagles set back earlier this season. Collins has been terrific all season for the Prep, compiling 5 goals and a trio of assists to help his team re-capture the Catholic Conference title.  Rose Raymond photo

Sam Smith of St. John's Prep battles with an Acton-Boxborough player for ball possession in a 1-0 Eagles loss earlier this season. Since the set back against the Colonials, Smith and Co. have compiled a 9-2-1 record en route to capturing the the Catholic Conference title after failing to do so a season ago.  Rose Raymond photo

St. John's Prep captain Aidan Dooley leaps high into the air to head this ball in his team's favor yesterday against Acton-Boxborough. Dolley has been a paramount leader all season for the Eagles, who will took to gain some momentum heading into this year's state tournament.  Rose Raymond photo

St. John's Prep junior midfielder Mitch Collins boots the ball between two Acton-Boxborough players during an Eagles set back earlier this season. Collins has been terrific all season for the Prep, compiling 5 goals and a trio of assists to help his team re-capture the Catholic Conference title.  Rose Raymond photo

Its soccer program is no different. Since 2001 the Eagles have qualified for the postseason every year but one, and this fall head coach Dave Crowell and Co. are well on their way to continuing that trend.

The Eagles, who took a 9-4-1 record into Tuesday night’s game at Andover, recently reclaimed the Catholic Conference title with a shutout win over rival B.C. High.

“We had tied them 1-1 up at there place earlier this year and knew that when we had that draw, that really bode well for us with them having to come to us for the last game,” said Crowell. “We didn’t win (the conference title) last year ... so it’s huge for the seniors and everyone on the team that’s been working hard all season.”

The Eagles’ conference-clinching triumph didn’t come easy. But playing in front of their home crowd during Alumni Day on campus proved to be a huge boost.

Sophomore Sam Smith (6 goals, 2 assists on the season) struck first for the Prep, finding the back of the net on a nice assist from junior Brian Brennan about 15 minutes in. Thanks to some stifling defense for the remainder of the contest, the goal proved to be the only one the Eagles needed — although Brennan would add an insurance marker later in the first half on a well placed penalty kick.

Brennan has been terrific all season long, leading a balanced Prep attack with eight goals and nine assists heading into Tuesday night’s game. His work on the offensive end was paramount to St. John’s Prep’s clutch victory over the weekend, but it was the team’s defense that stepped up biggest when needed the most.

“Our defense was phenomenal,” Crowell said following the win. “Our captain and center back, David Luongo,broke his hand at practice (last) Friday and Chris Jennings stepped up the next day and played 80 minutes of shutout soccer. Great job from him.”

Crowell also highlighted the play of Tommy Granata, who contributed some equally critical minutes on defense to help fill in the hole lost with Luongo. Keeper Jack Sorenstein capped off the win with some handy work as the last line of defense.

Overall, it was just what the Eagles were looking for heading down the regular season stretch. Tough matchups with Andover, Everett (who bested the Prep earlier this season), St. John’s Shrewsbury (arguably the top team in central Mass.) and Silver Lake await the Eagles before the state playoffs begin in two weeks.

“I know I keep saying this, but it’s not a hyperbole: we are playing one of the toughest schedules in the state,” said Crowell. “I mean, just these four games to finish the season are going to be a huge challenge for us.

“But we’ve come a long way and some of the tight games we lost earlier in the year are definitely going our way now, which is a good sign. I don’t know if we win this (B.C. High) game a month ago.”

Let’s take a look at where some of the other top teams stand as we come down the regular season homestretch:

On the girls side, Peabody has arguably been the top squad in the area, currently sitting in first place overall in the Northeastern Conference. The Tanners are also the only remaining unbeaten team in conference play at 10-0-1 following Tuesday night’s 3-1 triumph over Marblehead.

Their success is largely due in part to the stellar play of dynamic duo Emily Nelson (junior) and Marissa Orlando (sophomore). Collectively, the UMass Lowell- bound pair has accounted for 38 points (25 goals and 13 assists) in helping the Tanners to a 11-1-1 overall record with five games to play.

Nelson and Orlando were both a part of last year’s squad that made it all the way to the Division 1 North sectional final, and will look to make an even deeper run this year.

Swampscott is next in line, having put together an equally impressive 2016 campaign at 9-1-1. However, the Big Blue’s 3-0 setback at the hands of Peabody this past Sunday gives the Tanners a slight edge heading into the postseason. Still, Swampscott has had some impressive wins and has done so with an experienced and balanced lineup that has seen a number of different players get into the scoring column. The Big Blue have five winnable, yet challenging NEC games remaining before heading into the tournament.

Marblehead and Danvers are two other NEC squads that could make a splash come playoff time.

The Magicians are currently sustaining their longest losing streak of the season (3 games) after tough losses to Central Catholic (the top ranked team in the state), Danvers and Peabody. But with players like Meg McCarthy, Olivia Eddy, Lexi Bostley and Meg Ryan, my money is on Marblehead to bounce back.

On the other hand, the Falcons have reeled off six consecutive wins. They will face perhaps their biggest test of the season next Wednesday when they travel to Peabody.

Beverly is the other local NEC team looking to be well on its way to a postseason trip, while Salem (6-8) is currently on the outside looking in but has been playing some great soccer of late while inching closer to that coveted .500 mark at 6-8.

Speaking of Salem, big shout out and congratulations to Witches’ senior captain Tayla O’Leary, who recently broke the school record for goals in a single season with 21.

In the Cape Ann League, Masconomet and Hamilton-Wenham continue to impress and are a lock for November futbol, while Ipswich has three remaining contests to will try and push itsr record (6-7-1) at or above .500 by season’s end.

Other schools in the area such as Bishop Fenwick, Essex Tech and prviate schools Pingree and Waring have all compiled winning records to this point as well.

In boys play, we can find much of the same schools near the top of the standings.

In the NEC, Danvers continues its torrid pace and remains undefeated at 12-0. The Falcons plus/minus of +48 is still the most staggering stat in the league, and their amount of weapons offensively will be a scary look for opponents come playoff time.

Beverly (11-1-1 overall) and Swampscott (9-3-1 overall) are close behind, while Peabody and Marblehead are both on the bubble with less than two weeks remaining.

Over in the CAL, Masconomet and Hamilton-Wenham are in great position to earn a high seed in the state tournament. The Chieftains remain unbeaten in league play at 13-0 thanks to a potent offensive attack that includes Bryan Gilbert, Evan Glass, Mike Budrewicz and Matt Dzwil.

As for the Generals, they’ve earned their wins (9 of them, to be exact) with strong play on the other side of the ball. Goalkeeper Jack Wosepka has been tremendous in net, recording eight shutouts in 13 games. The Hamilton-Wenham defense has allowed just three goals all season; if their offense can get hot at the right time, they’ll be tough to beat moving forward.

The other remaining CAL team, Ipswich, has been playing their best soccer of late and is closing in on a postseason trip of their own after failing to do so the past three seasons. The Tigers are coming off a huge 1-0 win over Hamilton-Wenham and got past Rockport four days later with another shutout victory.

Just For Kicks, a column on North Shore high school soccer, appears each Wednesday in The Salem News. Contact staff writer Nick Giannino at ngiannino@salemnews.com or 978-338-2648, and follow him on Twitter @NickGiannino_SN.