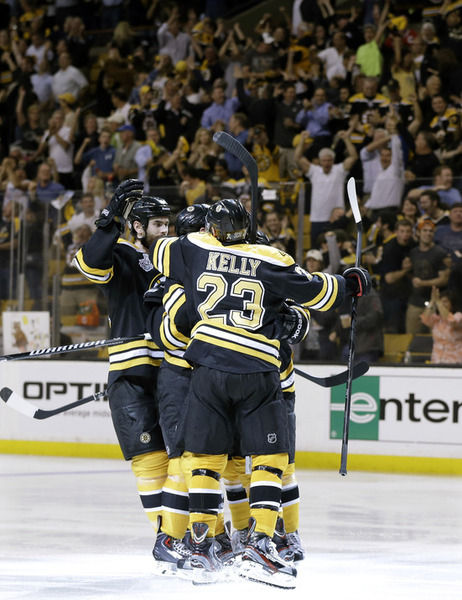 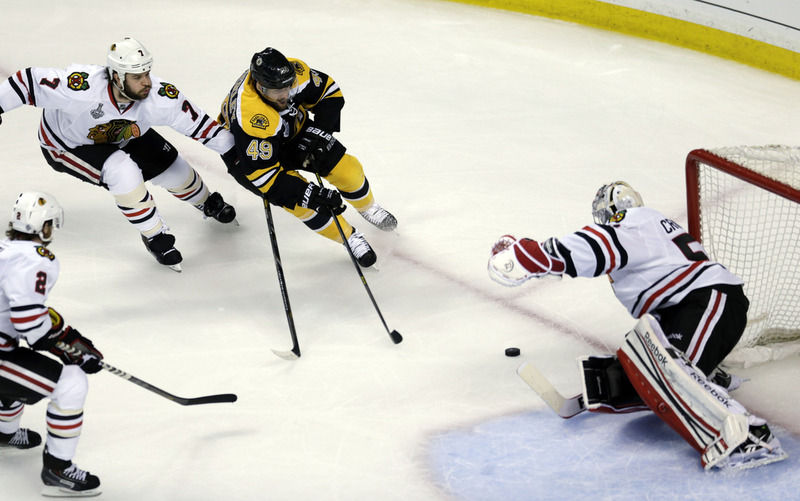 Inside the TD Garden, there was an even more beautiful sight: a Stanley Cup shutout victory for the ever-surging Boston Bruins.

Heroes galore wore Black-and-Gold last night in a 2-0 Game 3 triumph over the Chicago Blackhawks, one that gave the home team a 2-1 lead in the series. There’s Tuukka Rask’s whitewashing between the Boston pipes; Jaromir Jagr’s thread-the-needle-like-a-Singer-sewing-machine pass to Patrice Bergeron for a power play goal; Zdeno Chara’s continued dominance defensively (who can doubt this guy isn’t the best at his position in the league when it matters most) ... you could literally go up and down the Boston roster and find a reason to praise virtually every player who took to the ice last night.

So why focus on perhaps the Bruins’ most humble and reserved player?

Because Chris Kelly has been back to his old self these last two games — not ironically, both wins for his team. And when Kelly is on his game, the Bruins seem to be virtually unbeatable.

“Kells is more of an in-room type of guy, and we get to see the personality he is. He’s been bringing a lot of leadership (on) the ice for us, and I think we’re happy to have a guy like that in the room,” said his linemate, left wing Daniel Paille, who scored the game-winning goal on a play set up by Kelly. “I think he’s one of our most vocal leaders on the team, and I think that’s amazing to have -- and guys respond to it.”

Beloved by fans during the 2011 championship run after being acquired in a late February 2011 trade, Kelly was maligned earlier in these playoffs for not doing the things that ... well, make Chris Kelly who he is. The 32-year-old checking line center didn’t score a goal or dish out an assist in seven games against Toronto, five against the Rangers or during Boston’s four-game sweep of the Penguins. He was an ugly minus-3 during Boston’s triple overtime loss in Game 1 against Chicago, dropping him to minus-9 for the playoffs, and found himself playing on the fourth line.

But over the last two contests, No. 23 is back to doing everything that makes the blue collar fan base love him and his game. A return to his regular spot as the pivot on the third line, with speedsters Paille and Tyler Seguin as his wingmates, has resulted in a combined three goals and seven points for the trio. But so, too, is the veteran center’s craftiness and willingness to do anything his team needs paying off.

His relentless forecheck knocked Blackhawks defenseman Nick Leddy off the puck in the offensive zone, allowing Paille to pick it up and score Boston’s first goal last night. He earned his first assist of the playoffs and, for the second straight game, was a plus player (+3 in his last two games). He won a pair of third period draws in his own end when Chicago was on the power play, and overall was successful in eight of 11 tries on faceoffs (on a night where Boston was dominant, winning 71 percent of the time in the dot).

“I thought we did a better job bearing down on faceoffs,” said Kelly. “It’s such a big part of the game; you either start with the puck, or you start defending.”

He also had a hand in Boston’s second goal. Using his speed to get by Chicago’s Dave Bolland, Kelly attacked the net to Crawford’s right, forcing Boland to cross check him and giving Boston a power play 12 minutes into the second period. When Paille drew a tripping call against Blackhawks defenseman Niklas Hjalmarsson on virtually the exact same play before the Bolland penalty was up, it gave the Bruins a 5-on-3 advantage for 11 seconds. They didn’t score there, but did on the ensuing 5-on-4 when Bergeron buried the above-mentioned silk-thread pass from Jagr.

Kelly’s efforts didn’t go for naught; he drew a rousing cheer from the sellout crowd in the middle stanza when he dove, face first, to knock a loose puck out of the Boston zone.

“I think we’ve done a good job taking time and space away and getting the puck all the way down (in their zone),” Kelly said, when asked how the Bruins negated the powerful Blackhawks attack. “We’ve done a nice job getting in on the forecheck and creating turnovers ... coming back to the house and making teams work for their chances.”

OK, we can all agree that Kelly is no one’s idea of the ideal sound byte. It’s not part of his requirements to succeed at the NHL level, and that’s fine.

But really, who cares? Grind it out and help the Bruins win hockey games; that’s all that really matters at this stage of the game.