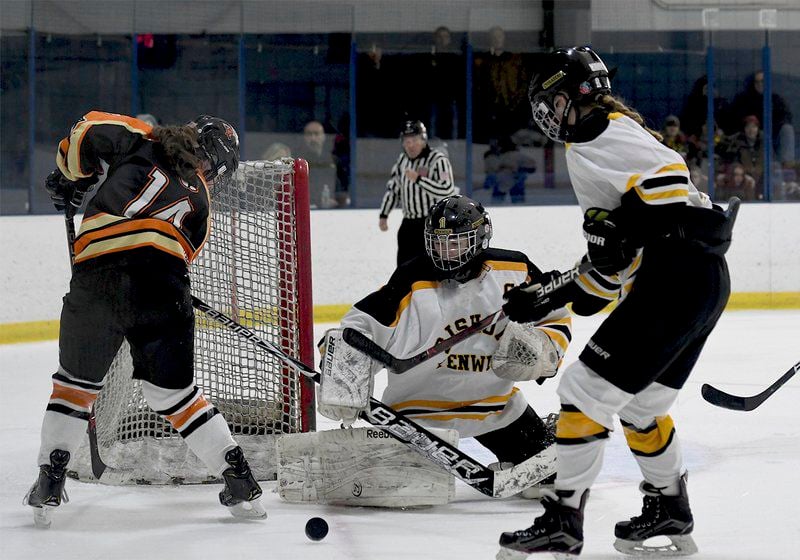 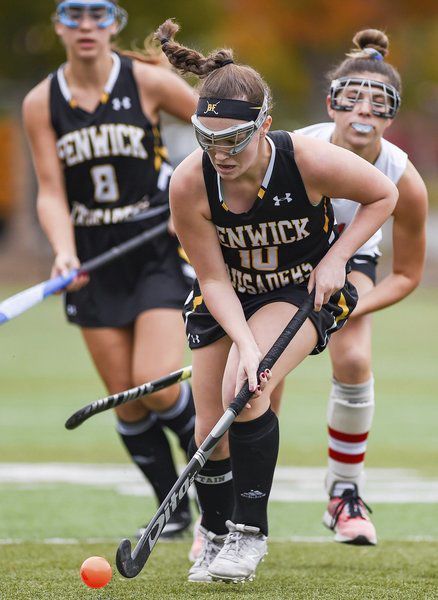 JAIME CAMPOS/Staff photo Multi-sport star Cailyn Wesley spends the fall scoring goals for Bishop Fenwick and the winter stopping them as a goalie. 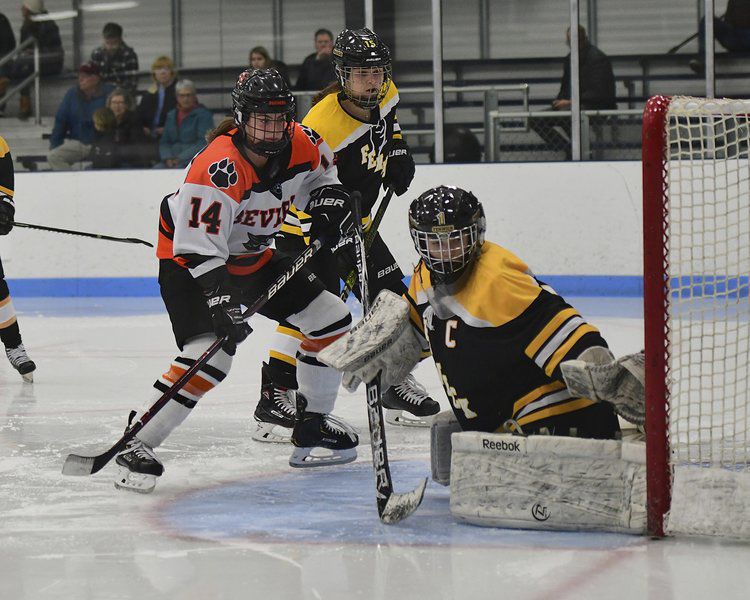 Bishop Fenwick goalie Cailyn Wesley made a triumphant return to the net this winter after missing last year with an injury. Rose Raymond photo

JAIME CAMPOS/Staff photo Multi-sport star Cailyn Wesley spends the fall scoring goals for Bishop Fenwick and the winter stopping them as a goalie.

Bishop Fenwick goalie Cailyn Wesley made a triumphant return to the net this winter after missing last year with an injury. Rose Raymond photo

When she was only a freshman, someone watching the Bishop Fenwick girls hockey team compared goalie Cailyn Wesley to retired Bruins legend Tim Thomas.

It wasn’t just the shared Black-and-Gold color schemes and the matching ice white pads. The aura Wesley gave off from the between the pipes — the hyper-competitive, ‘This is my crease, not yours’ way she approached stopping her opponents — was the same one that helped propel Thomas and the B’s to the 2011 Stanley Cup.

Moments after that analogy was made, almost on cue, Wesley ventured out of the blue paint to make an unconventional, nearly impossible save.

There wasn’t any denying it: Fenwick’s goalie was made special stuff.

“She’s one of the most competitive kids I’ve ever been around,” said Fenwick coach John Kasle. “She’s a phenomenal goalie, very athletic and very driven.”

Wesley is enjoying an outstanding senior season that’s been even more special since she’s making up for lost time. A serious ankle injury during the 2018 field hockey season kept her off the ice for the entity of her junior year, and while she healed up in time to have an all-star lacrosse season at Fenwick last spring, getting used to playing goalie again was a major hurdle she cleared over the summer.

“I knew my leg could handle running but skating is totally different: The movement, knowing where the posts are on the ice, being confident in slamming your skate into that pipe,” Wesley recalled. “I wouldn’t say I was nervous. But I tried to get on the ice every week so I could get used to it again.”

Those summer skill sessions were also where Fenwick started gelling as team. With the bulk of last year’s 13-win club returning, plus some talented freshmen with Wesley’s added return in net, all the pieces were in place for a special season.

At 11-4-3 overall, the squad has lived up to that billing and more. Wesley herself is among the North Shore’s leaders in wins (10), saves (355), shutouts (4) and minutes played (720) and has the Crusaders in the state tournament for the second straight season and fourth time ever. A year ago, Fenwick won its first-ever state tournament game with Wesley filling in as part manager, part assistant coach and part team statistician while she was injured.

“I always felt like I was part of the team,” said Wesley, who hardly missed a practice and never frowned while unable to skate. “I like charting the shots and focusing on the styles of the other teams. Watching our goalie, too, helped me see the game from the offensive point of view. It gave me a good understanding of what our team does well and it made me not afraid to give some pointers.”

Fenwick’s aim with two goals to go is to ensure they have a first-round home game and, perhaps, hoist the girls Carlin Cup against rival Peabody for the first time since 2016.

“The hardest part of not playing was watching us get that first playoff win. It meant so much for the program. We want to it again and try to go even further,” said Wesley, who grew up in Wakefield and now lives in Peabody.

A three-sport standout, Wesley has hit milestones in every sport she’s played at Fenwick: 1,000 career saves on the ice and over 100 career points in both lacrosse (71 goals and 85 points just last year) and field hockey, where she set a school record with 28 goals last fall.

In fact, she’ll be playing both those sports next year in college at St. Joseph’s in Maine. Wesley plans to study nursing, where she’ll be a fourth-generation nurse following in the footsteps of her mom’s side of the family.

“There was never any pressure or anything like that,” she said. “I’ve always been intrigued by what my mom was doing at work and I thought I’d enjoy it myself. There’s so many different kinds of jobs you can go into from nursing.”

How did an athlete so good at scoring goals on grass wind up stopping them on the ice? As a 10-year-old, she took the regular rotation playing goalie that most youth teams employ and simply never wanted to climb out of the crease.

“There’s a constant thrill when you’re in net,” Wesley said. “Being on the ice the whole time, having to make those big saves under pressure — from the first game in there, I loved it.”

Those skills she has in the other sports do influence the way Wesley plays goalie. She’s a very active keeper with something of an attack mentality — she’s not going to get caught sitting back trying to let the puck come to her.

“I definitely don’t want to shooting to be making the first move,” she explained. “I like to come out, I’m definitely an aggressive type of netminder and I’ve always had that confidence where I can come out and get a stick on the puck.”

Boasting 21 career wins with a 2.36 goals against average and .907 career save percentage, Wesley is having her best season with a 1.75 goals against and a .927 save percentage. In her team’s first-ever meeting with St. Mary’s Lynn, she made a Crusader single-game record 47 saves despite the loss. No matter the scenario or the opponent, the Crusaders know they’re going to get the best possible effort from their captain (and one of only three seniors).

“I’m not that superstitious, not like some goalies you hear about,” Wesley said. “I do feel like I need the same seat on the bus and in the locker room so I throw myself off. Tiny things like that help me get locked in: Hitting the posts a certain way, hitting my pads a certain way.”

All of a sudden Peabody (12-5-1 before Wednesday’s league championship game at Winthrop) is one of the hottest teams in the state. Winners of five straight the Tanners are clicking both offensively and defensively as they look to finish the year among the top seeds in Division 1’s tournament bracket.

“That positioning in the state tournament is crucial. As we saw last year, getting a home game is really ideal for us,” said coach Michelle Roach, whose team won its first ever playoff game in the comfort’s of McVann-O’Keefe Rink 12 months ago.

Peabody is 16-3-2 the last two seasons at home and 6-2-1 this year with only Monday’s Carlin Cup against Fenwick remaining. Technically, that’s a road game for Peabody but we’ll count it as a home building result for both sides.

One of the biggest assets for the Tanners in their recent run of strong play? Captain and defenseman Carolyn Garofoli. A Division 1 field hockey recruit to New Hampshire after leading Lynnfield to a tremendous tournament run in the fall, Garofoli is poised and confident on and away from the puck.

“She’s a kid that comes up in the clutch. She’s reliable in high pressure situations,” Roach said. “She’s doing a great job holding the puck and looking for lanes instead of forcing it. She’s been trying new things, getting creative; she’s been at this for four years and she keeps getting better.”

Hats off, literally, to Masconomet senior defenseman Meghan McElaney for scoring three times in last week’s win over Medford. It was the first hat trick by a Chieftain skater this season and the first by any North Shore defenseman this year. Going back through the scoring archives, it may be one of the only hat tricks by a Masco girls D in the program’s 20-or-so year history.

Going back through ten years of scoring data, the last hat trick by any local defenseman on record is by Meghan McGunigle in February of 2014 (coincidentally also the first hat trick in Fenwick program history). Peabody’s aforementioned Carolyn Garofoli had a hatty in her freshman year, but was playing forward that season.

Another oddity: Of the eight hat tricks scored locally so far this year, four have come at the expense of Medford. Yet the Mustangs could be responsible for determining the Northeastern League champion, since their win over Winthrop had Peabody in first place by a single point going into Wednesday’s action.

Keeping an eye on undefeated St. Mary’s Lynn (13-0-3), Peabody native Jenna Chaplain remains one of the Spartans’ leading scorers with 13 goals and 27 points. Just a freshman, Chaplain is on a career-200 point pace after potting 20-plus goals as an eighth grader.

Most eyes in the state will be on Connery Rink in Lynn Saturday (4 p.m.) when St. Mary’s hosts Austin Prep (14-1-2) in a battle of two of the best girls high school teams in New England. The rivals tied 3-3 in mid-December and have outscored their opponents by a combined 158-34.

Nice to see Marblehead’s girls win on their Senior Day last Sunday morning with a come-from-behind victory over Scituate. The team’s lone 12th grader is a special one, Norwegian exchange student Maja Frida Osborn. She’s had a great time learning what American high school sports are all about along with her host family.

A number of local youth programs, including Beverly, Cape Ann, Marblehead, Danvers and Agawam, will be having a tourney for mite age girls at Salem State on Feb. 23 starting at 7:30 a.m. There will be half-ice games with small nets and goalies as the teams look to get more experience and interest from young girls learning the game.

Kick Saves, a column on North Shore girls hockey, appears in The Salem News each Thursday during the winter season. You can contact Matt Williams at 978-338-2669, MWilliams@salemnews.com and follow along on Twitter @MattWilliams_SN.