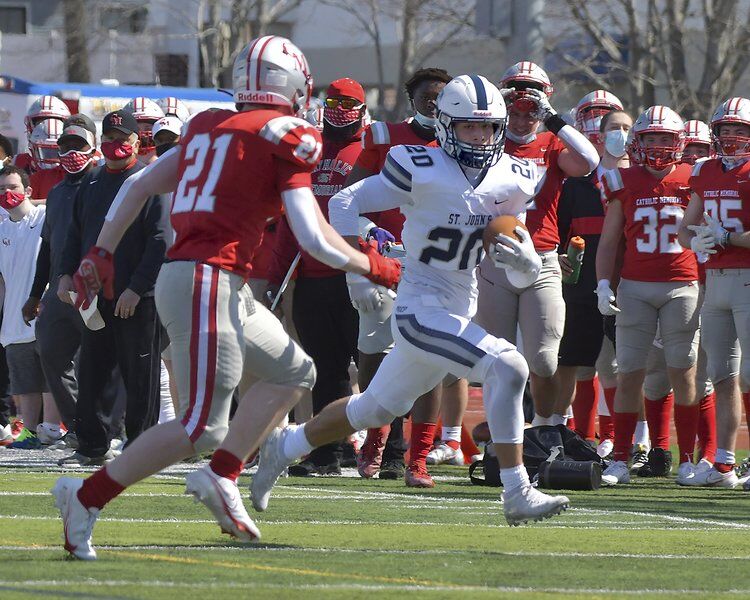 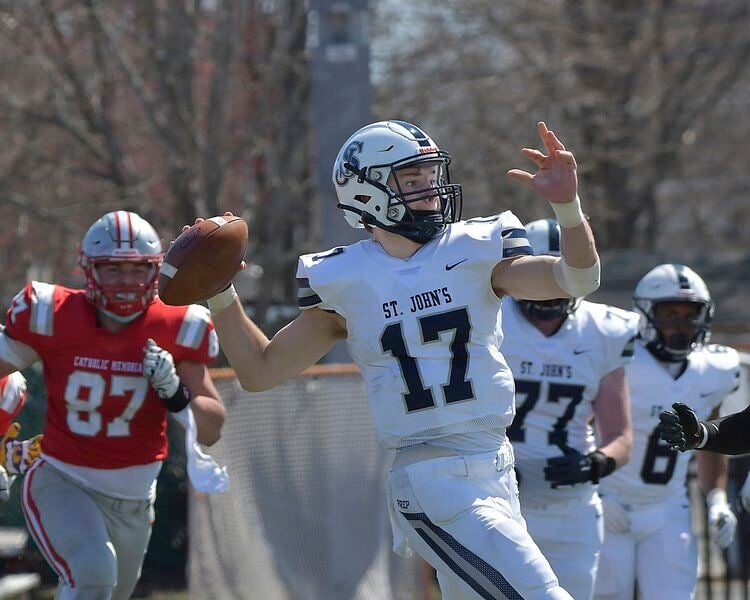 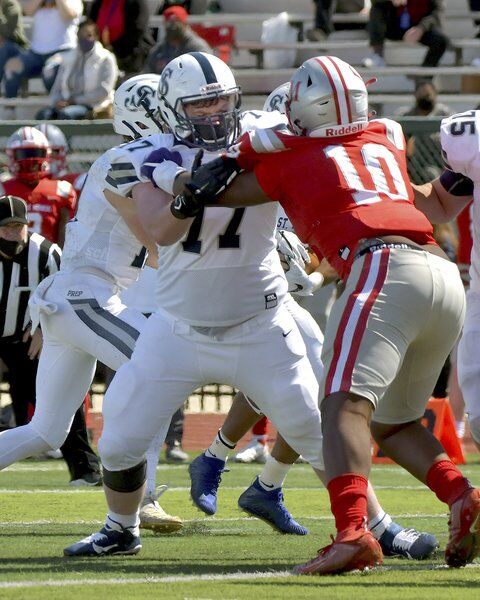 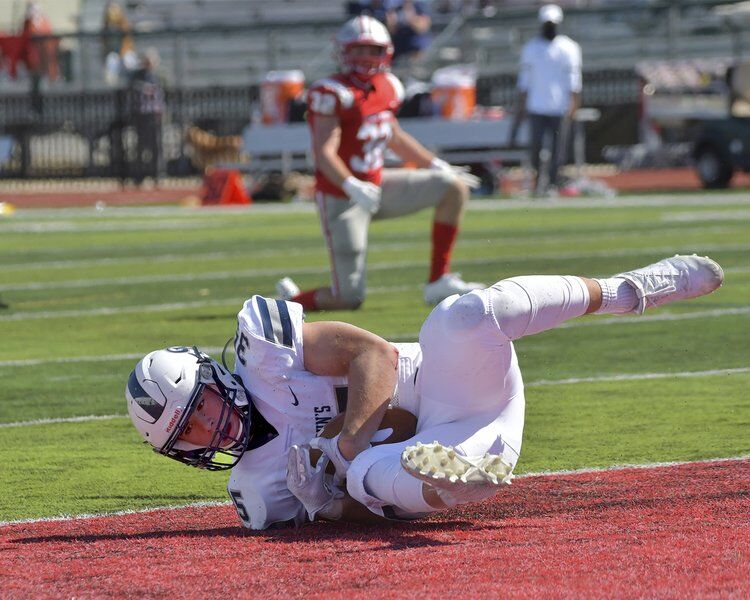 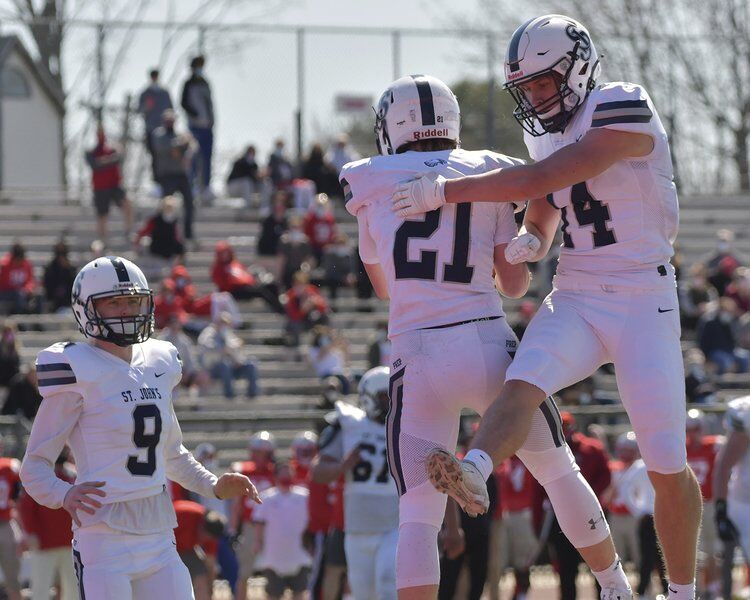 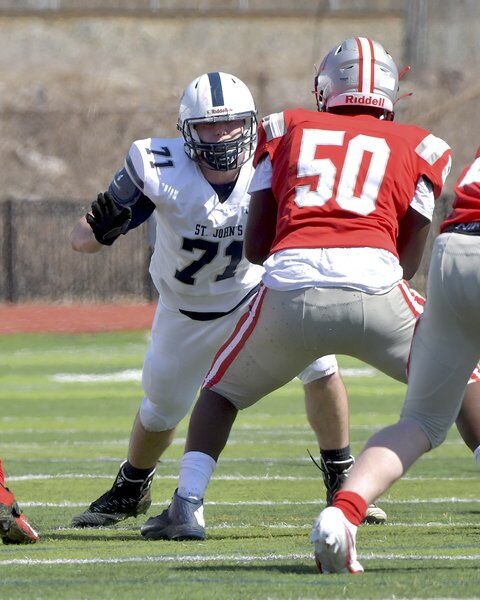 WEST ROXBURY — How do you offset four interceptions and two fumbles lost?

By rushing for 402 yards and owning the line of scrimmage.

That's what Catholic Memorial was able to do Saturday afternoon at O'Connor Stadium, controlling the line of scrimmage with their speed and strength to run past St. John's Prep, 49-24, in a battle of Catholic Conference heavyweights.

The Eagles (now 1-2) defeated Catholic Memorial in each of the past two Division 1 state Super Bowl championship games, but they never led on this day. They trailed by just five (21-16) at halftime before the Knights scored four of the contest's final five touchdowns, with two in both the third and fourth quarters to emphatically claim victory.

"They handled us," admitted St. John's Prep head coach Brian St. Pierre, whose team was outgained, 412-334, on the day. "They're a big, physical group and we're not.

"I thought we competed, especially in that first half, but they just wore us down. They're better than us right now, clearly."

This marked just the second time in the last 26 years that St. John's had allowed as many as 49 points in one game; the other came in the 2017 playoff quarterfinals against Everett (49-14), which at the time was led by current CM coach, John DiBiaso.

Every time St. John's Prep was able to put points on the board, the Knights (2-0) responded in kind. The home team had eight different offensive plays that went for 15 yards or more, and added an 88-yard kickoff return and a 65-yard fumble return for touchdowns to boot.

"We gained some momentum and made a few plays in the pass game," said St. Pierre, 'but we also missed some passes we needed to hit. The margin of error against these guys, with their talent and Division 1 players, is just so small."

A few of those players bound for Boston College had huge afternoons for Catholic Memorial. Sophomore speedster Datrell Jones had a game-high 144 yards on just 14 touches out of the backfield, including a 5-yard scoring burst as well as the aforementioned 88-yard runback for six points. Captain Owen McGowan, who alternated between fullback, the slot, quarterback and middle linebacker, had a touchdown of his own among his 71 rushing yards.

"Up front we thought we had the advantage," said McGowan, who both ran and executed DiBiaso's famed double tight formation with chain-moving precision.

Another sophomore, running back Carson Harwood, added 143 yards on 18 carries and scoring jaunts of 51 and three yards. If his name sounds familiar, it's because he played at St. John's Prep in 2019 as a freshman. (When he broke his leg, St. Pierre spent three hours in the hospital with the Gloucester native to make sure he was all right).

"I told the offensive line (postgame) they us on their backs and carried us today," said DiBiaso. "I've been coaching a very long time and never won a game with six turnovers."

Junior defensive back Tyee Ambrosh and his classmate, linebacker Dylan Wordarski, both picked off quarterback Connor Fitzgerald on CM's first two drives, but the visitors were forced to punt both times. A third pick by sophomore Lucas Verrier early in the second quarter resulted in him kicking a 24-yard field goal four plays later, making it 7-3.

Following Jones' ensuing kickoff return, the Eagles made it 14-10 when Victor Harrington hit Jackson Delaney in the right corner of the end zone from 18 yards out. The Knights scored again quickly, but a fumble on their next possession that the Prep's Charlie Stark recovered gave his team possession at the CM 38. Following a big 25-yard bootleg pickup by Harrington on 3rd-and-2, James Guy (142 yards on 23 carries) took it inside the two, where Harrington found captain Grady McGowan on a play action pass to make it 21-16 at halftime.

Catholic Memorial scored on three of its four possessions in the second half; the only one that didn't result in a score was when junior Matt Mitchell intercepted Fitzgerald.

The Eagles' final score was the result of a 20-yard run up the gut by junior tailback Ryan Grenier, which culminated an 11-play, 75-yard drive.

"This game meant a little bit to them," St. Pierre, whose team will play at St. John's of Shrewsbury next Saturday, said of the Knights. "I guess they had some incentive."