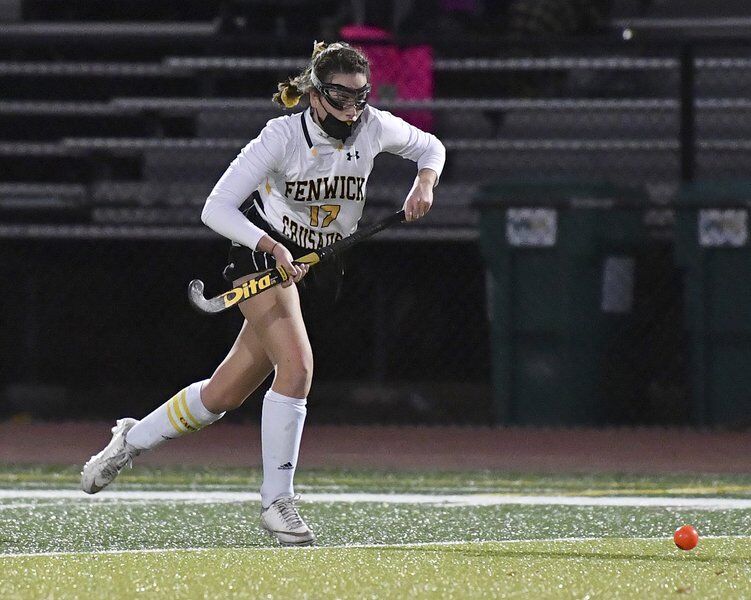 Moved up to forward for the first time, Bishop Fenwick captain Paige Littlehale responded with a pair of goals in her team's 5-2 CCL Cup semifinal victory over St. Mary's of Lynn. Rose Raymond photo 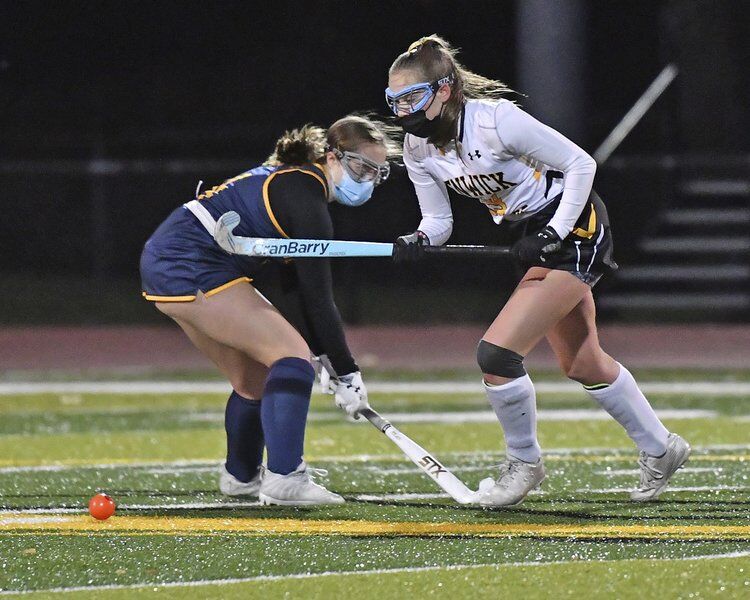 Bishop Fenwick senior Shannon Nagy, who had an assist in her team's 5-2 win Thursday, knocks the ball past a St. Mary's of Lynn defender. Rose Raymond photo 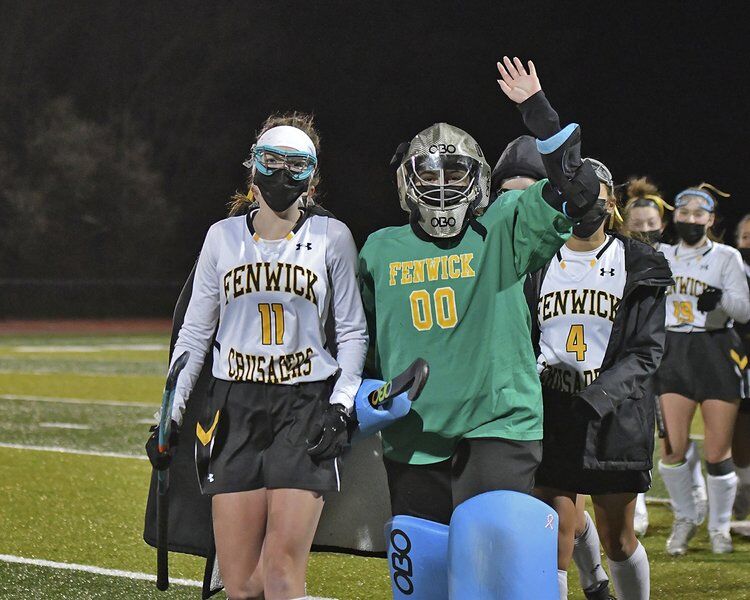 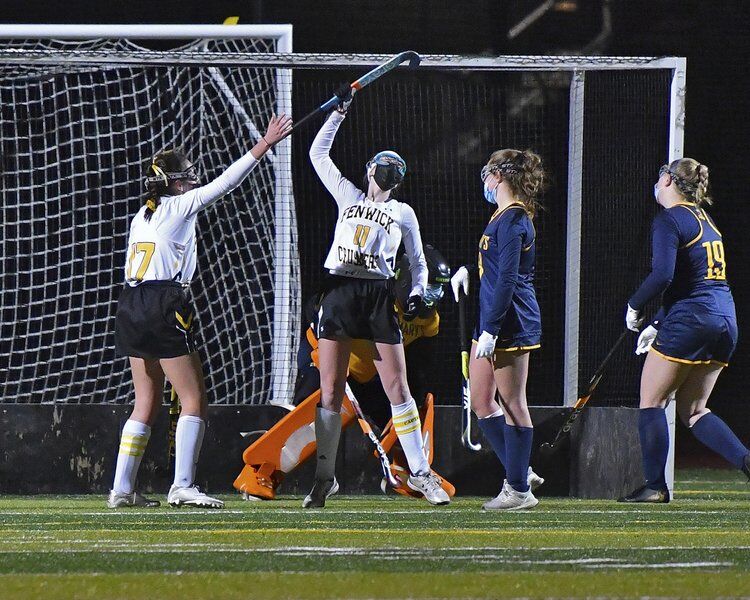 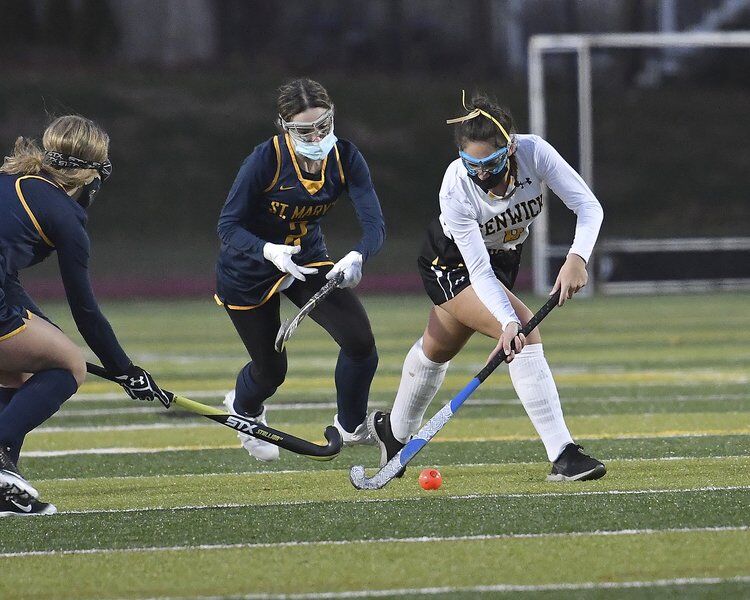 Moved up to forward for the first time, Bishop Fenwick captain Paige Littlehale responded with a pair of goals in her team's 5-2 CCL Cup semifinal victory over St. Mary's of Lynn. Rose Raymond photo

Bishop Fenwick senior Shannon Nagy, who had an assist in her team's 5-2 win Thursday, knocks the ball past a St. Mary's of Lynn defender. Rose Raymond photo

PEABODY — It was pure happenstance that Paige Littlehale would up starting at forward.

It was Senior Day for the Bishop Fenwick field hockey team Thursday, and head coach Marybeth Mahoney wanted her team's six 12th graders to start their Catholic Central League Cup semifinal game against St. Mary's of Lynn. So Littlehale — who began her career as a defender and has since become a mainstay for Fenwick at midfield — found herself on the front lines in her team's biggest game of the year.

So all she did was go out and score the game's first two goals, giving the hosts a lead they'd never relinquish in defeating the Spartans for the third time in as many tries this fall, 5-2, on an evening where the real feel temperature at Donaldson Field was a bone chilling 18 degrees.

"I've been working since freshman year to improve my offense," said the 17-year-old Littlehale, a Fenwick captain. "So to score those two goals feels so, so good."

Fellow captain Grace Morey, a junior who is the team's leading scorer (14 goals, 35 points), added a goal of her own and two assists for Fenwick (5-3-2). Senior Emma Perry and senior Leah Nardone also hit the back of the net for the winners, with senior Shannon Nagy and Littlehale both adding solo assists.

Another senior captain, goalkeeper Cat Elias, finished with seven stops. Three of those were enormous in the big picture: a breakaway save on St. Mary's forward Maggie Pierce just 1:46 in, which ultimately led to Littlehale's first goal at the other end of the field less than a minute later; a sprawling kick save with her pads extended on the Spartans' most dangerous offensive threat, Pejae Parent; and another stellar denial of a Parent scoring bid in the second half, where she stacked the pads to make the stop.

"To be tested early was a good thing," said the 18-year-old Elias, whose given name is Catalina. "If I don't touch the ball right away, like until the third quarter, I can get a little cold. So it was good to get a shot like that and come up with the save right after warmups ended, because I tend to get really nervous before games."

"St. Mary's did a good job getting some long hits upfield and (had) a couple of breakaways on Cat when they got past our last defender," said Mahoney. "It was huge the way she came out aggressive; she was fantastic shutting down those chances."

Kristina Rusha, a defender and yet another Fenwick senior, saved a potential play with an excellent defensive play late in the third quarter, breaking up an excellent upfield rush by Yirsy Queliz of St. Mary's after the latter had zig-zagged her way deep into Fenwick territory.

Mahoney, whose team was playing its first game in two weeks, wondered if her team might show some rust early on Thursday, especially after getting just a few practices in beforehand. "But I feel like we rose to the challenge," she said.

Littlehale's two goals — one a tip in at the far post off a Morey pass, the other a blast from just inside the circle — gave Fenwick a 2-0 lead after 15 minutes of play. Parent countered for St. Mary's in the second quarter, making it 2-1 at the break. It appeared as though it'd stay that way going into the fourth quarter, but a Spartan turnover near midfield and subsequent rush the other way resulted in Perry knocking home a pass from Morey with one second left before the horn sounded.

"Grace creates a lot of opportunities (offensively)," said Mahoney, "so when she's not finishing herself, she does a really good job of getting the ball upfield and setting up other players."

Morey's goal, with a little less than six minutes to play, extended Fenwick's lead to three goals before Pierce countered for the visitors. Nardone's goal, from Littlehale, with 21 seconds to play sealed the deal.

Fenwick will now host the CCL Cup final Saturday at home against Bishop Feehan, which defeated Bishop Stang, 2-0, in Thursday's other semifinal.