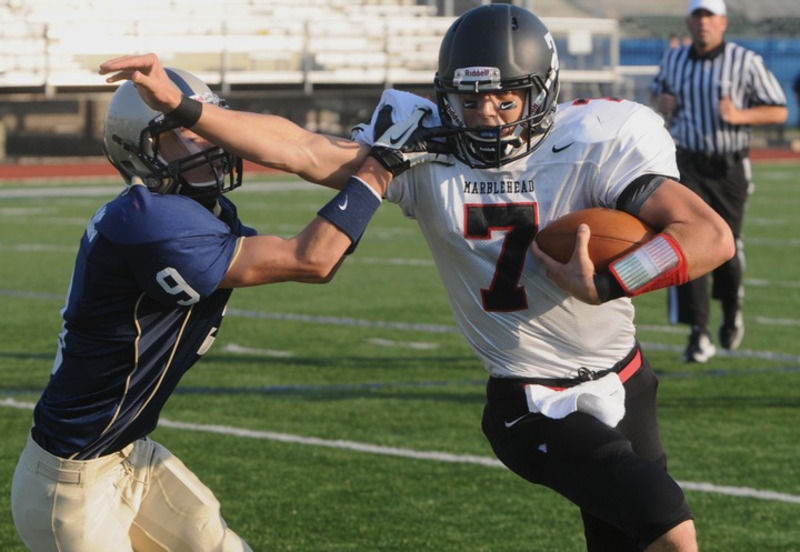 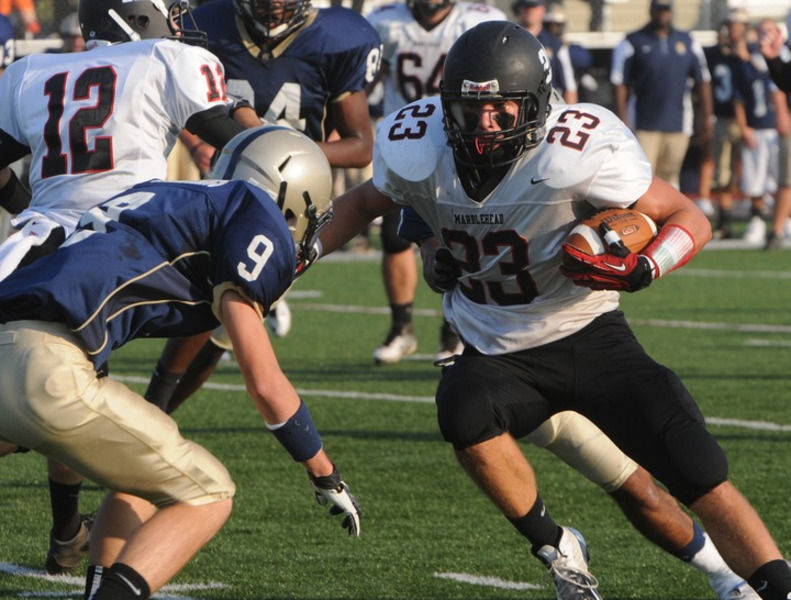 Jeremy Gillis of Marblehead tries to dodge a St. Mary's defender during the Magicians' 21-20 triumph yesterday.

Jeremy Gillis of Marblehead tries to dodge a St. Mary's defender during the Magicians' 21-20 triumph yesterday.

The visiting Magicians found the end zone on three of their nine offensive possessions and managed to hang on to a 21-20 victory, despite a late fourth quarter push by St. Mary’s at Manning Field.

“It was great for both cities to play each other,” said Marblehead head coach Jim Rudloff whose team improves to 2-0. “Manning is my favorite place to play that isn’t called Marblehead. The thing was, we were nervous going in because we didn’t know a lot about St. Mary’s. I watched them in the Cambridge game last week and from a Marblehead perspective it as frighting, because they just destroyed them.

“I wasn’t so sure how we would match up against them. They were pounding the ball at us. Jordan Collier is an absolute stud and their linemen are big and fast. I think the thing I’m most impressed with is the number of kids that can down field onto a safety.”

Marblehead struck first going 43 yards on 11 plays as quarterback Ian Maag dove in for a four-yard touchdown run in the final minutes of the opening quarter. Maag threw for 103 yards in the first half, including a deep 61-yard touchdown pass to Brian Daly in the second quarter to tie the score at 14.

Marblehead’s Brooks Tyrrell got touch after touch in the second half and erupted for 88 yards on nine carries. Tyrrell scored the Magicians final touchdown on 20-yard run in the closing minutes of the third quarter to make the score 21-14. As one of the younger guys on the team, Tyrrell stepped up after captain Zac Cuzner got banged up earlier in the game.

“What’s most impressive is that he’s a sophomore,” added Rudloff. “A lot of our younger guys are getting significant snaps for us. If they play like sophomores we’re not going to do very well this year, but if they mature every game and do better we can be a pretty good football team.

“Brooks got burnt terribly for a touchdown in the first half at safety, something we’ve worked on all week long. He knew he had made a mistake, but the sign of maturity is that most kids would’ve hung their heads after that. Obviously that didn’t happen, that’s maturing right before your eyes in the middle of the game. So we go back, look at film and fix it in practice. At the same time we saw some huge positives that happened in the middle of game, when things were at there worst. He didn’t hang is head and he stepped up big for us.”

The Spartans came right back on the next drive as Jake Cassidy scored from three yards out to put them within one, but after the rush failed Marblehead maintained the lead midway through the fourth quarter. The Magicians quickly went three and out and St. Mary’s took over on the 31-yard-line.

Defensively, the Magicians held St. Mary’s to only 19 yards on the final drive as Cassidy threw three incompletions in the final two minutes of the game— one of which could’ve been the game changer.

In a 4th and 15 situation, everyone on the Marblehead side including Rudloff held, held their breath as Cassidy targeted Jordan Manthorne in the end zone. Cassidy, who threw for 58-yard touchdown pass earlier in game, couldn’t connect with his junior running back and the Magicians took over on their own 25-yard line to solidify the win.

“I think both for my cardiovascular and my heart it was huge plus,” joked Rudloff. “For my family’s life over the next week, it was a huge plus. In all seriousness it was really big, because we are a young defense. I wasn’t sure we were going to be able to do that. We’re throwing kids out there to see what sticks and the kids have to prove themselves play after play.

“It was a huge stop. If they had, the game would’ve been over, but good things happen. Our kids really stepped up when they needed to and made good plays.”

Maag finished the night with 128 yards passing and only one interception. Baly was the top receiver of the night for the Magicians with 83-yards on three catches.