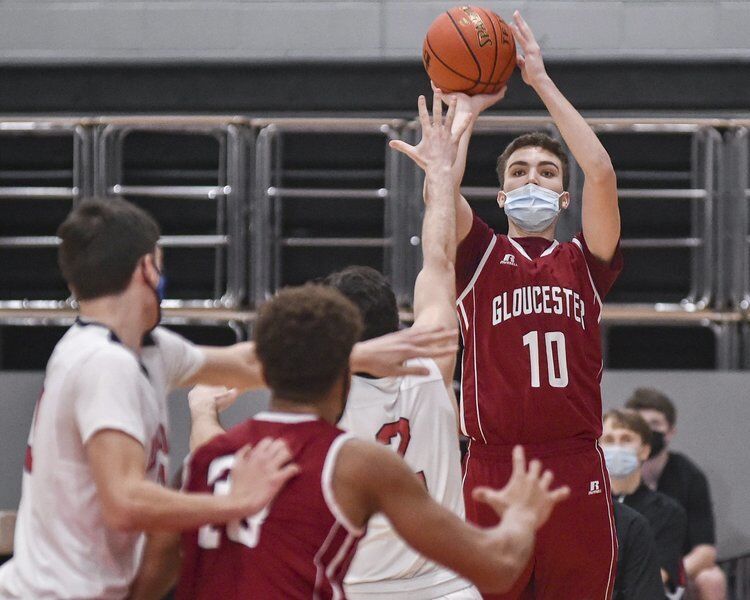 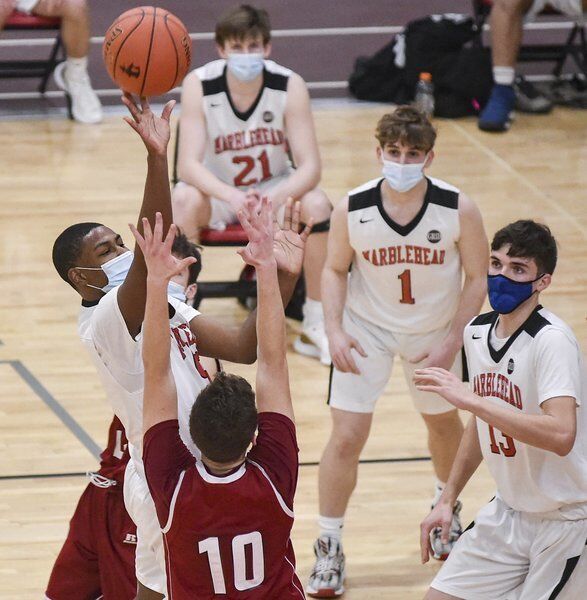 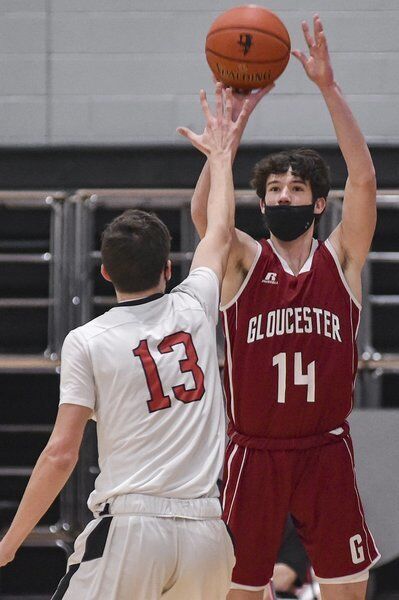 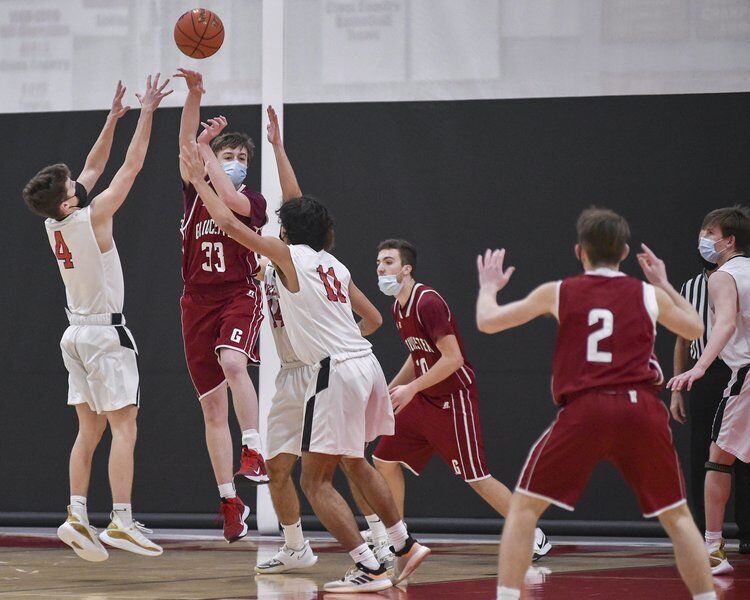 Gloucester's Nathaniel Montagnino (33) passes the ball to an open Adam Borowick (2) while being smothered by Marblehead defenders. JAIME CAMPOS/Staff photo 2/15/2021 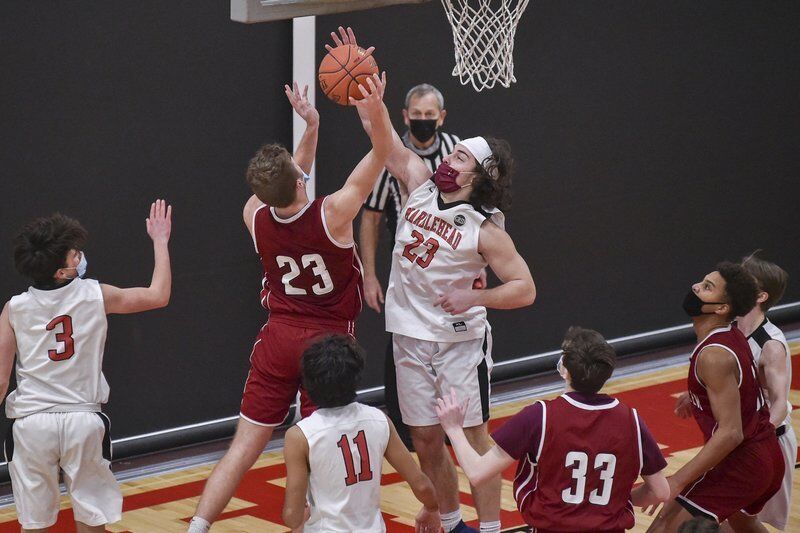 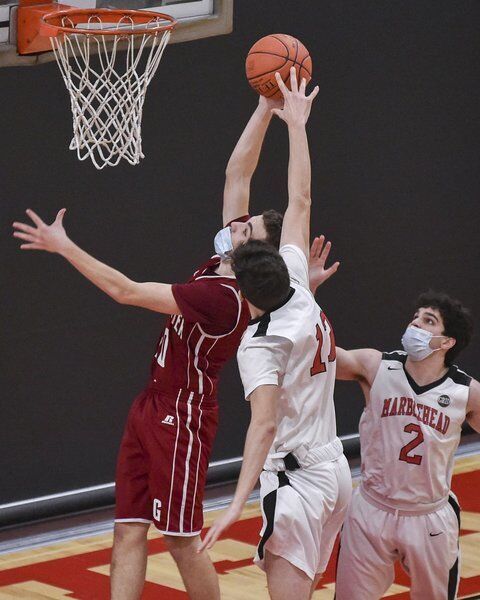 Gloucester's Nathaniel Montagnino (33) passes the ball to an open Adam Borowick (2) while being smothered by Marblehead defenders. JAIME CAMPOS/Staff photo 2/15/2021

MARBLEHEAD — With just over four minutes to play in the third quarter Monday against visiting Gloucester, the Marblehead High boys basketball team took their first lead on a pull-up bank shot from sophomore Tyrone Countrymon.

The Magicians' would relinquish that lead just once more but were ultimately able to pull through down the stretch to secure a 54-47 triumph.

That third quarter provided the most meaningful eight minutes of action for the hosts, who outscored Gloucester 22-7 in the frame to seize control.

"My biggest fear was when we finally took the lead that we would get complacent like, 'Oh, we have the lead now; this is it, now we're over the hump," admitted Marblehead head coach Mike Giardi. "But we kept up the intensity and with them running only seven or eight guys compared to our 12-14, I thought they were getting really tired. We were just hoping we had more guys that could keep the energy going for that amount of time and it worked out."

As well as the third quarter went for Marblehead, it was equally as bad in the first few minutes.

Gloucester opened the game on an 8-0 run with a couple of threes in the opening minute, and the Magicians' were chasing that deficit until Countrymon's jumper midway through the third. But the Fishermen weren't able to keep the offense rolling from there, allowing Marblehead to take advantage on the other end.

"Early on in the game we had some success just hitting the shots we were given," said Gloucester head coach Adam Philpott. "But we really didn't make the defense work too much.

"We were trying to move the ball and get the defense moving and hopefully get it inside to our bigs and it just wasn't working. We didn't do enough to shift the defense and open up opportunities for us. We knew what (Marblehead) was going to bring coming in, but we just didn't execute like we need to."

Shaking off the slow start and early deficit, the Magicians ultimately clawed their way back with a commitment to defense and some crisp offensive possessions. They traded baskets with their foes in the second quarter and trailed by just seven at the break before exploding in the decisive third.

Not only was Marblehead pressing hard in the full court and jumping the passing lanes with a purpose (they made 16 steals on the night and forced numerous other turnovers), but they started to knock down shots on the other end. If they weren't getting out on the fast break and scoring easy buckets inside, players like Magnus McCarthy (11 points including two big threes in the third), Kipp Schauder (11 points, 5 rebounds, 3 assists, 3 steals) and Countrymon (10 points, 4 rebounds, two assists, one steal) were knocking down shots from the outside.

Still, with just a minute left in regulation Marblehead led by only four points and Gloucester was getting set to inbound the ball on the opposite baseline out of the timeout. But Magicians' guard Josh Robertson was able to poke the ball free from a Fisherman player bringing the ball up court, generating a turnover and then finding Countrymon in the corner for an open three that he calmly knocked down to seal the deal.

"I told the guys during the timeout that we have to be smarter at the end of the game. We've had 11 games and besides three of them we've come down to the final minute," said Giardi. "One thing we didn't want to do was the stop the clock, so we didn't foul, got a good top from behind from Josh and got we were smart with it which was huge."

In terms of the game-clinching trey from Countrymon, Giardi couldn't have been happier with the look and decision to let loose.

"It was a big shot and that was one where I said, 'that's a good look'," said Giardi. "We got penetration and then the kick out to him, Josh just gave him a good look, a wide open three and you can't fault Tyrone for shooting it because even if he misses they still have to score twice on the other end."

Despite the loss, Gloucester got some terrific play from junior Byron Thomas, who knocked down five 3-balls on the evening en route to a game-high 18 points to go with five rebounds and three assists. Big man Gavyn Hillier managed 10 points and five rebounds but was virtually a non factor down low against the relentless Marblehead D, while Zach Oliver (8 points, 6 rebounds, 3 assists) and Adam Borowick (7 points) each knocked down a pair of triples.

"That was definitely a good sign to us shooting the ball that well, we haven't done that in the past few games," said Philpott. "We have capable shooters but it's just a matter of setting up those opportunities in our half court sets. We have three games left so we'll look at the film and try to finish strong."