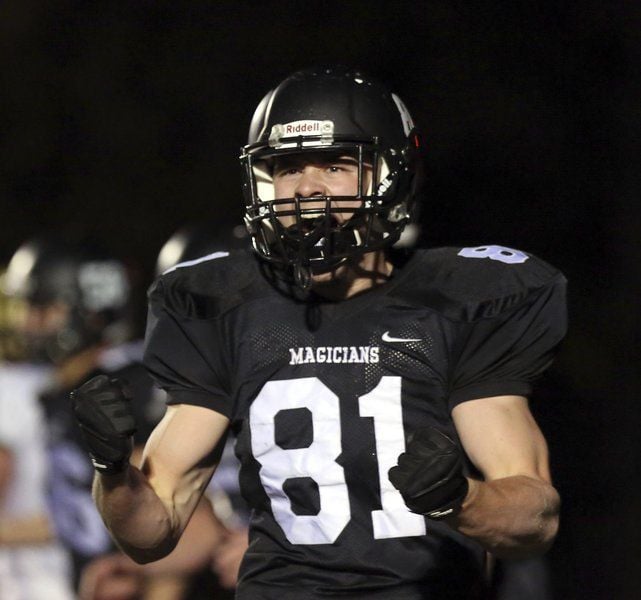 DAVID LE/Staff photo. Marblehead senior captain Manning Sears pumps both his fists and lets out a scream of excitement after he scored a touchdown against North Reading in the D2A North Championship game. 11/11/16 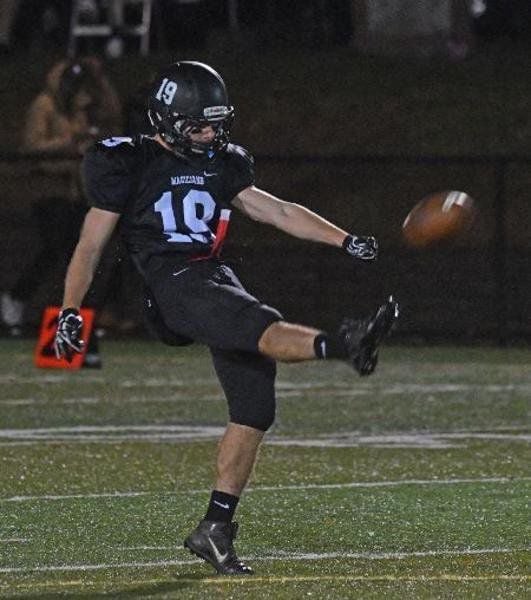 Marblehead's 'Mr. Everything', running back/slot receiver/defensive back/punter/kicker Sam Paquette, and the Magicians hope to give Falmouth the boot in Saturday's Division 2A Super Bowl at Gillette Stadium in Foxborough. Photo by joebrownphotos.com

DAVID LE/Staff photo. Marblehead senior captain Manning Sears pumps both his fists and lets out a scream of excitement after he scored a touchdown against North Reading in the D2A North Championship game. 11/11/16

Marblehead's 'Mr. Everything', running back/slot receiver/defensive back/punter/kicker Sam Paquette, and the Magicians hope to give Falmouth the boot in Saturday's Division 2A Super Bowl at Gillette Stadium in Foxborough. Photo by joebrownphotos.com

When does a good team know it has a chance to be great, extraordinary ... even legendary?

For the unbeaten Marblehead High football team, that realization came during an 15-day stretch in late September.

The first three Northeastern Conference North games on the Magicians’ 2016 schedule were the trio of schools that posed the biggest threat to their conference supremacy: Danvers, Peabody and Beverly. Danvers upset Marblehead in the 2015 sectional final; Peabody’s size and physicality always causes problems; and Beverly’s skill set and big-play potential could cause serious problems.

But the Magicians passed all three tests — and in doing so, reaffirmed to themselves that this could be a special season.

“Right after that Danvers game, and then two weeks later after Beverly, we knew,” said senior defensive back Justin Faia, who owns nine interceptions this season for the 11-0 Marbleheaders. “We just felt it.”

The Magicians hope to put those lessons learned to good use Saturday when they take on fellow unbeaten Falmouth (12-0) for the Division 2A Super Bowl at Gillette Stadium in Foxborough.

Deadlocked at 7-7 and 14-14 on the road against Danvers — the only time all season Marblehead has not been ahead of their foes, save for when the contest was scoreless — the Magicians pulled away to an eventual 30-23 victory thanks to, in succession, a 29-yard blocked kick return from Sam Frontero, a safety when Danvers snapped the ball out of the end zone, and a 14-yard scoring pass from quarterback Drew Gally to captain Harry Craig.

The following week against Peabody, the Red and Black shot out to a 19-0 lead at halftime and made it 27-0 in the third quarter in a 33-14 triumph. Gally and captain Jaason Lopez (125 yards on 12 carries) had rushing scores while Craig and Derek Marino caught TD passes from Gally.

Then came the Big Test: Week 5 at home against fellow unbeaten Beverly. It turned out to be no contest as Lopez ran for 177 yards and three scores in a 39-7 rout of the Panthers, piling up 426 yards of offense.

An important side note: both Danvers and Beverly went on to win nine games this season, with the latter going on to capture the Division 2 North championship with upset road wins at Tewksbury and Billerica.

“We weren’t surprised to see those (Beverly) guys do what they did in the playoffs,” said captain Manning Sears. “We’ve been playing against them forever and knew the talent they had, that core group of guys where the talent was unreal. So for us to beat them like we did at home, that really told us something about our team.”

After breaking his left ankle during a simple tackle Thanksgiving morning against Swampscott, Craig will not only miss Saturday’s Super Bowl showdown, but the entire basketball season as well. He hopes to be ready for lacrosse come early April.

While certainly disappointed he won’t have a chance to help is team win its first Super Bowl with his on-field play at both receiver and outside linebacker, he’s quickly taken on a role as a de facto student coach from the sidelines. During a practice earlier this week, the 6-foot-1, 205-pounder ambled onto his crutches and went from the sidelines over to the middle of the MHS gymnasium floor to point out a nuance to junior Tyrese Hardy, who’ll be taking over his spot defensively.

“It’ll obviously be different for me watching from the sidelines and not being able to play,” said the cerebral senior, “but I want to help however I can. We’ve got so much depth and talent on this team that I know guys will step up and do an amazing job on Saturday.”

“Losing Harry hurts,” admitted Paquette, “but we do have a lot of athletes ready to step up and make plays. We’re all confident we can do so.”

One thing’s for certain if Marblehead wins Saturday: “I’m staying out of the pig pile,” Craig said with a chuckle.

Marblehead’s offense line — captain Bo Millett at left tackle, fellow senior Griffin Minigello at left guard, and juniors Aidan Gillis at center, Nick Corsini at right guard,and Will Bosworth lining up at right tackle — drew heaps of praise from their teammates this week.  “Those guys make it happen for us on offense,” said Marino, pointing in particular to the way Bosworth has filled a crucial spot on the O-line, making it more cohesive.

Lopez was asked earlier this season if there was any deep meaning to the fact that is his first name, Jaason, has two a’s in it.

“I think my parents just wanted me to be unique,” he said with a smile.

That he is, particularly on the gridiron. The 5-foot-8, 170-pound senior tailback has run for 914 yards and 13 scores despite often not playing in the second half of blowout wins. His east-west lateral movement and ability to fly through gaps make him a threat every time the ball is in his hands.

Sears, on stopping Falmouth’s multi-threat quarterback, senior Nick Couhig: “He’s going to be tough to stop. A QB that runs the triple option and throws well puts a lot on your plate defensively. But we have the athletes to put us in position to make the plays that we should ... and I hoping we show up Saturday and make those.”

¢¢¢Gally has a clear memory of Marblehead’s other Super Bowl visit in 2009, against Bishop Feehan at Gillette. He was in the fifth grade and looked up to the stars of that team such as Hayes Richardson and captains Matt Evans and Evan Comeau “like they were the coolest guys in the world” and was heartbroken when the Magicians fell, 12-6, to the Shamrocks.

“Just the thought that we have the chance to put ourselves in the category as those guys is unbelievable to me,” said Gally.

The senior signal caller also noted the atmosphere around Marblehead High, and the town in general, is infectious. “You can sense it ... everyone’s talking about the game,” he said. “They’re selling Super Bowl T-shirts and hats in town, too. Everyone is excited.”